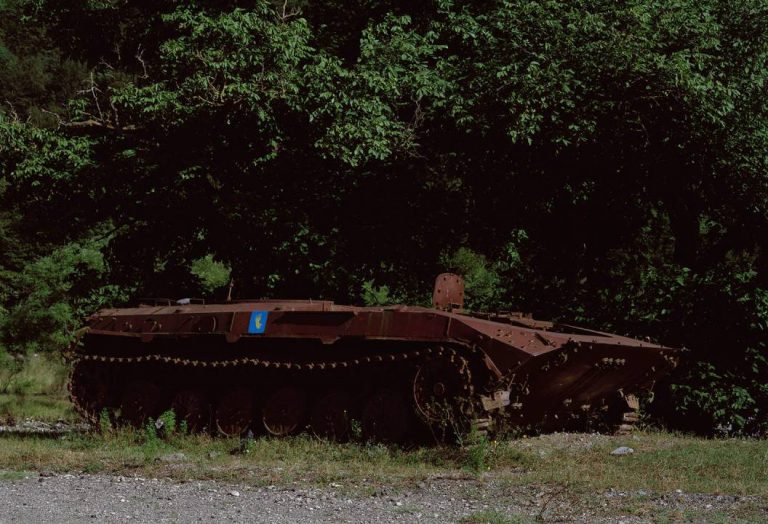 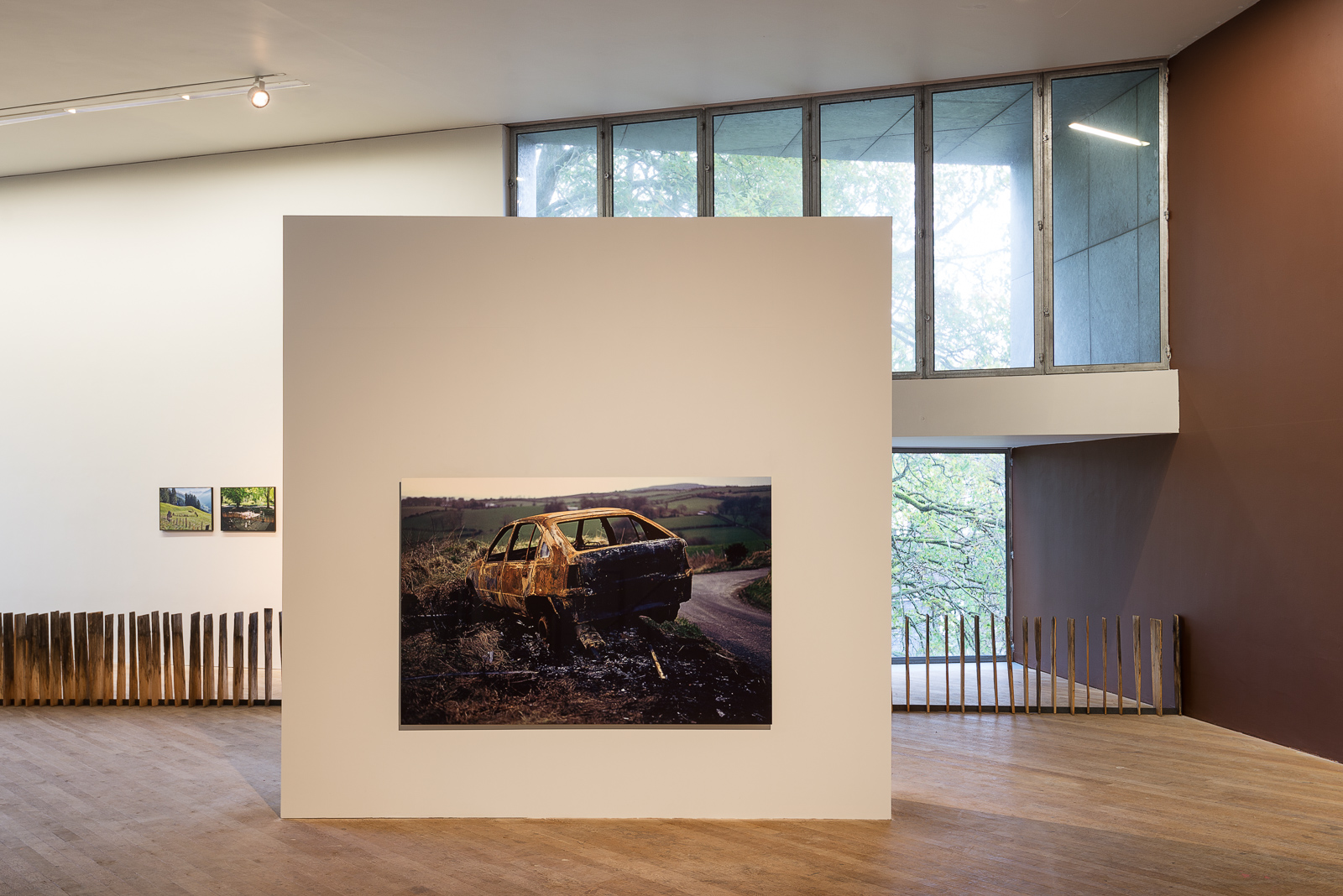 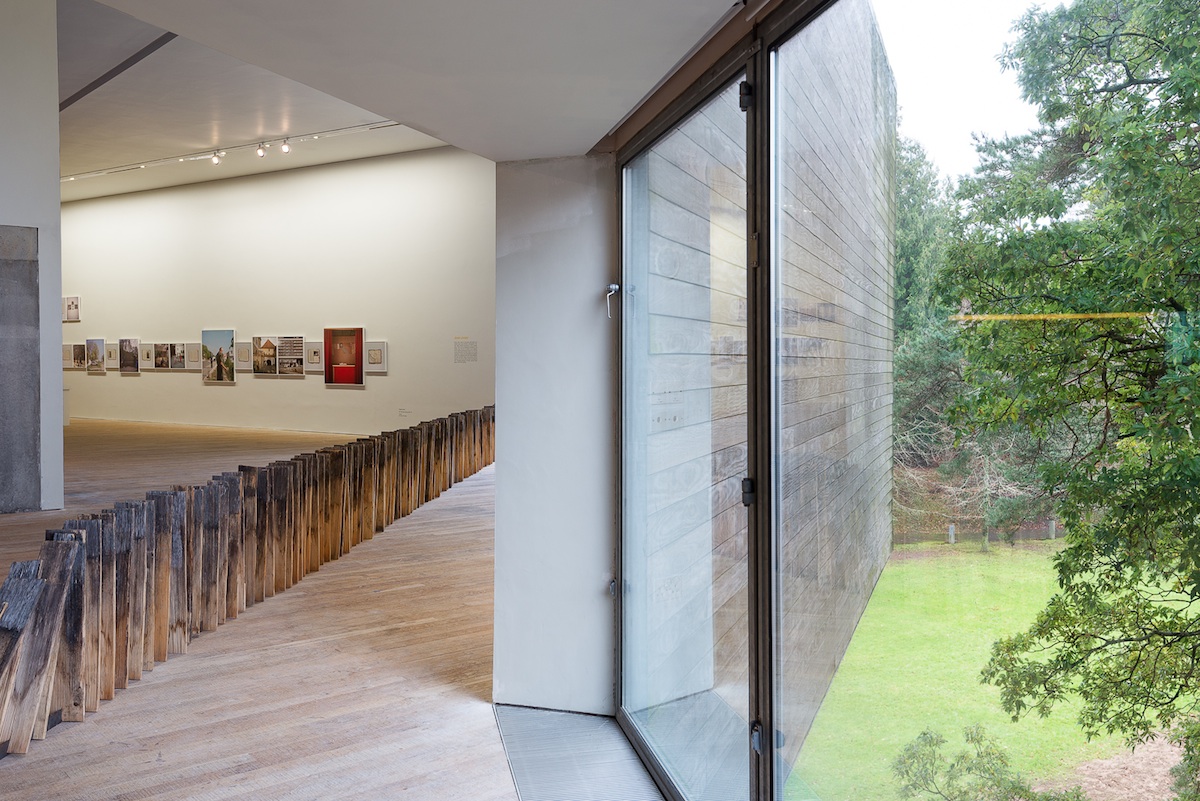 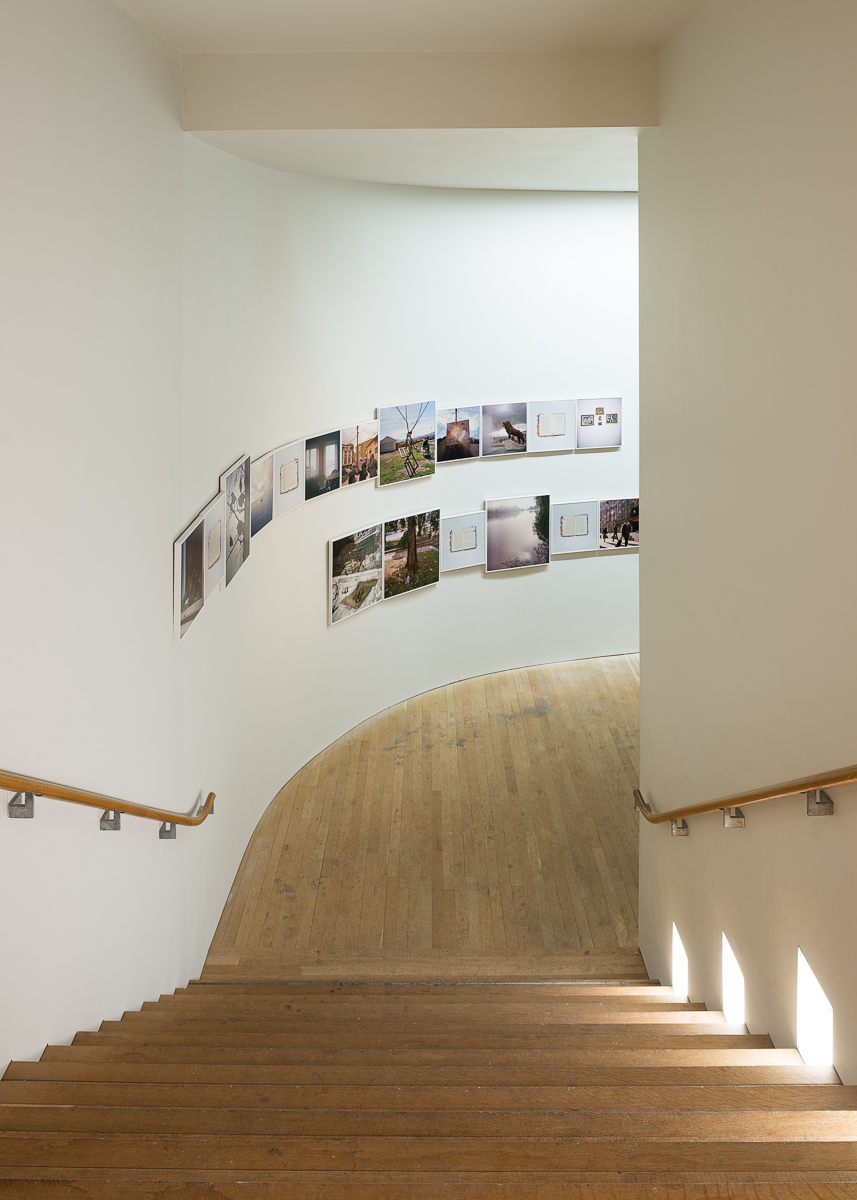 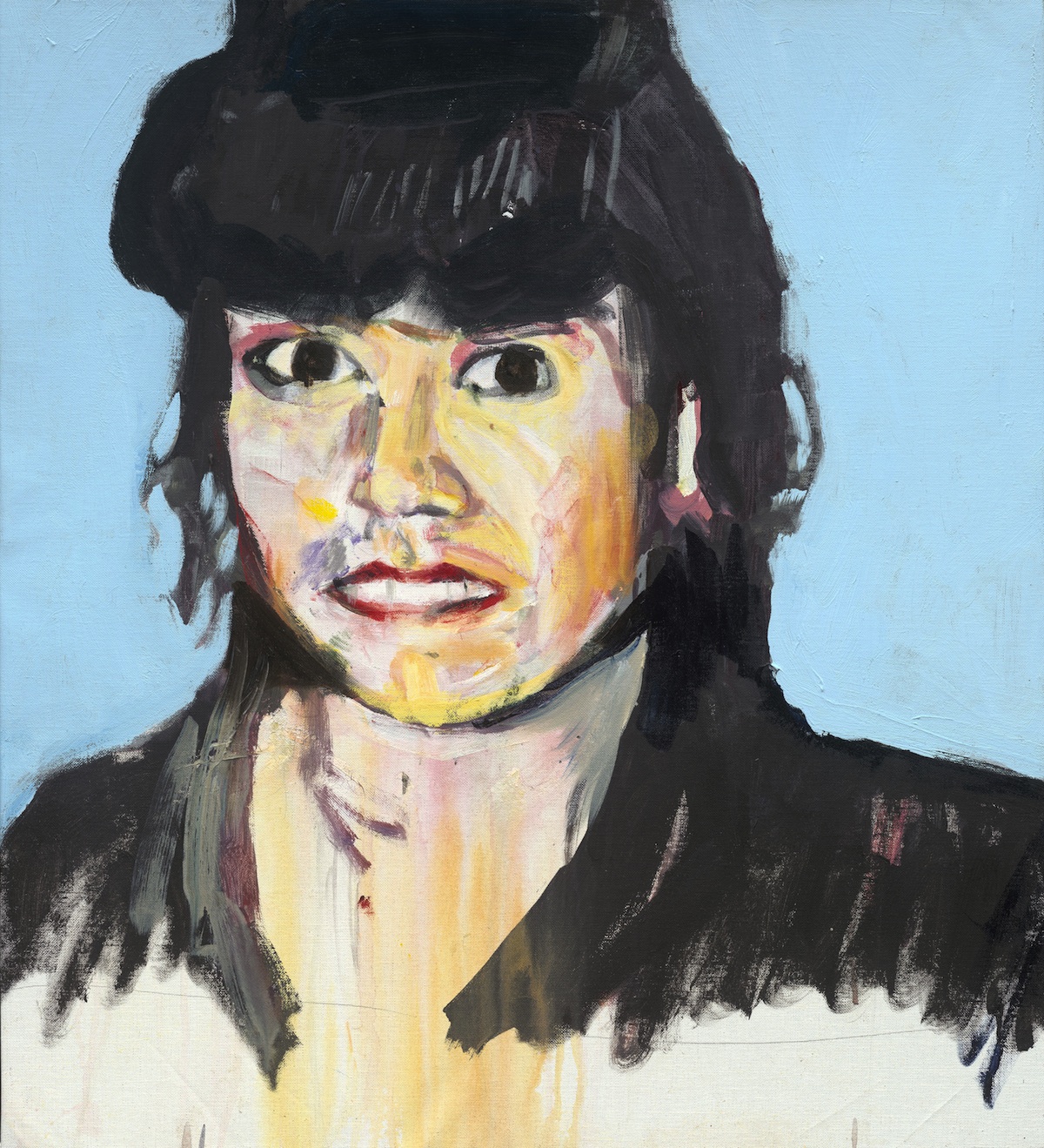 In 2005, the first human projectile was launched across an international border. David Smith, equipped with his passport, was propelled from a Tijuana beach to San Diego, arcing over a ramshackle, saw toothed fence to an empty patch of sand on the US side, its only occupants the migras or border police positioned around Smith’s safety net. The human cannonball was the centrepiece of a carnival staged by Javier Tellez and documented in One Flew Over the Void (2005); a beach party complete with a parade, brass band and candy floss vendors. The work was performed in collaboration with the patients of the Tijuana psychiatric institution, who participated wearing plastic animal masks and carrying placards protesting against the stigmas of mental illness. Tellez’s work is absurdist, surreal and joyous, and the title, which so obviously puns on One Flew Over the Cuckoo’s Nest (1975) prompts us to approach the idea of a border in new and unexpected ways. The Russian literary critic Mikhail Bakthin argued that carnival and the carnivalesque – a temporary and raucous celebration and suspension of the rules of decorum – create a space where ideas and truths are endlessly tested and contested, and all demand equal dialogic status. Tellez’s work effectively opens up the concept of a border: from a division that separates political, social and economic spaces, to a metaphor for another type of division, one that separates the normal from the pathological. It allows the idea of a border to emerge as a distinctly dynamic phenomenon – something that can emerge, disappear and re-emerge as a point of contact as well as a barrier,and as a zone of negotiation as well as one of conflict.

This is among the most compelling aspects of a timely and thoughtful show, which, even in its more problematic moments, raises pertinent questions. Encompassing geopolitical borders from the South Tyrol to Nagorny Karabakh to Palestine, it is refreshingly outward looking, yet it is perhaps most effective when addressing the personal as well as the socio-political. It also allows us to consider familiar work in a new light. Outposts is bookended by Willie Doherty’s photographs. His near iconic Border Incident from 1994 opens the exhibition, a burnt-out hatchback on an unmarked and unremarkable roadside, an image that is haunted by violence and impending threat. Doherty’s work is synonymous with the complex and fraught history of Northern Ireland, and with the specificity of his native Derry. However, this exhibition confronts us with the surprising sameness of disputed border areas around the world. Doherty’s charred wreck is twinned with Syrian artist Hrair Sarkissian’s Front Line (2008), where a rusting hulk of a tank is partially buried in a green hedgerow. This nondescript roadside lies somewhere along the disputed border of the self-proclaimed independent Republic of Nagorny Karabakh, a war-torn enclave squeezed between Armenia and Azerbaijan, and which shares a border with Iran. The saturated green of Doherty’s Derry roadside might contrast with the sun drenched ditch in Sarkissian’s Front Line, but these two contested areas, separated by vast distances are eerily similar: scrubby, nondescript and uninhabited but for the rotting hulks of burnt out vehicles.

This is one of a number of satisfying moments of curatorial choreography. Outposts is dominated by photography, with some painting, installed in staggered ribbons that snake through the space. On the first floor, this undulating rhythm is counterposed by Katharina Cibulka’s ist heute morgen (2015), a domino line of wooden shingles taken from the South Tyrol region of Italy, formerly part of the Austro-Hungarian empire – a simple border or fence literalised in the gallery space, but also a deeply effective formal device, one which marshals and accentuates the inimitable architecture of the Glucksman.

Doherty’s work is made freshly urgent given the newly uncertain fate of the Irish border area post-Brexit, and the curation of the show explicitly positions it this way. His photographic series Loose Ends (2016) which closes the exhibition, is positioned next to a display of artist designed posters in support of the failed Remain campaign. Loose Ends was commissioned by the Arts Council of Ireland as part of its programme for Ireland 2016, and these large scale photographic diptychs present us with lavish close-ups of Dublin’s Moore Street, where the final events of the 1916 Rising played out. Bordering on the abstract, these shots of peeling, dank walls and cracked footpaths are, in formal terms, exquisitely balanced studies of colour and texture. However, although aesthetically compelling, they are drained of any affective impact. The work as commissioned was originally accompanied by a film, narrated by Sean McGinley, which slowly panned across the landscape of Gola, an island off the coast of Donegal, also associated with the events of the Rising. Taken as a whole, the film and photographic works reflect on the corrosive passage of time and the difficulty, indeed the futility of memorialisation. Presented just with the photographic element, however intensely focused on the materiality of a specific and historically loaded place, the encounter with the work remains a formal one, and arguably the full impact of the work is not transmitted.

The preponderance of photography in Outposts becomes somewhat problematic in this regard. The insistence on a neutral, documentary mode, even now, when most of us are inured to photography’s claim to truth, is insistently, even relentlessly affectless. By dwelling on the nondescript, the deserted and the almost uncanny blankness of these border areas, or former border areas, as in Dara McGrath’s Edgelands (2010-11), we are also anaesthetised to the human cost of territorial disputes. In contrast, Larissa Sansour’s film Land Confiscation Order 06/24/T (2007) is more effective in conveying something of the precarity and complexity of life in Palestine. Blending documentary style footage of Israeli soldiers presenting a confiscation order to Sansour’s family and neighbours with a gently elegiac ritual, where the artist’s siblings wrap their house in black cloth, the work communicates both personal mourning for the loss of a home, along with a sense of the strategies of domination and the terror of occupation.

Dragana Jurisic’s YU: The Lost Country (2011-13), similarly interweaves the micro and the macro, or the personal narrative into the larger socio-political narrative, by tracing the border of the country in which she was born, a country that no longer exists. A photographic travelogue of her journey around Yugoslavia, Jurisic’s narrative followed the route taken by the Anglo-Irish writer Rebecca West in her 1937 book Black Lamb and Grey Falcon. The photographs are interspersed with Jurisic’s pencil notes, overlaying the text of West’s book, and recording the mundane or traumatic incidents of her journey, but arguably the handwritten notes do not do enough to counteract the distancing effect of photography.

In this context, Brian Maguire’s portrait series is bracingly visceral. Outposts shows four works from his series of post-mortem portraits of some of the working class women brutally murdered in Ciudad Juarez, a sprawling border city separated from the US by the Rio Grande, and hard by the man made border – a 15 meter high, 1,000 kilometre fence. Juarez, a city on the front line of globalisation, where so many maquilladores or sweat shops are sited, has become infamous for the mass slaughter of women and young girls; many of the victims young women from impoverished backgrounds who worked in the maquilladores. Maguire’s portraits are the result of a four year long engagement with the families of the murder victims. He paints two versions of every portrait: one for the family to hang on their wall as a celebration of their child’s life, the other to deliver a political message to the public – each work hangs next to a stark text that relates the circumstances surrounding the murder. Maguire’s expressionist style renders each portrait in loose veils and washes of colour, rescuing the individual from the statistic, and acting as powerful testament to the lives lost and forgotten in the unimaginable brutality that plagues the Mexican border.

Outposts invites us to consider the “cultural, social and political borders that map our contested world”, at a time when, according to the UN, the world is experiencing the largest migration of people since World War II, with more than a million people fleeing to Europe by sea in 2015, crossing borders illegally in order to escape war, climate change, persecution and poverty. In this context, Maguire’s work provides a jarringly disruptive, and deeply necessary, shift in tone; one which propels us from the dreamily meditative, as in Sansour or Jurisic’s work, or the gently surreal, as in Jun Chang’s Phantom Island (2005) – a video of an artificial land mass, as green and hump backed as a child’s drawing of a dinosaur being towed out to sea by a fume belching tug – to a more stark encounter with the harsh, unpredictable and frequently tragic narratives of migration, displacement and dispossession. This show is at its strongest when these human stories are given voice.