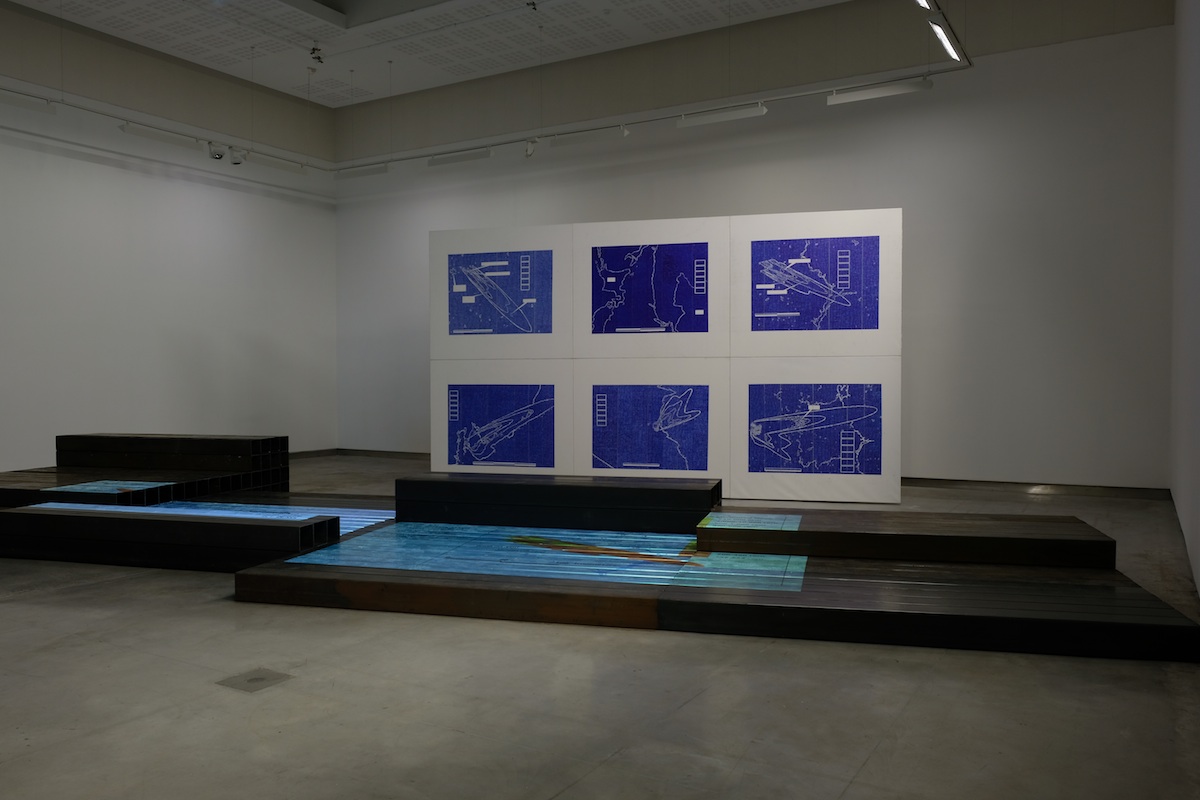 Andrei Molodkins ‘Fallout Pattern’. The Installation centres on ‘Attack on Russia – A Time for Change’, a leaked US Military document outlining a nuclear war plan over Russia. 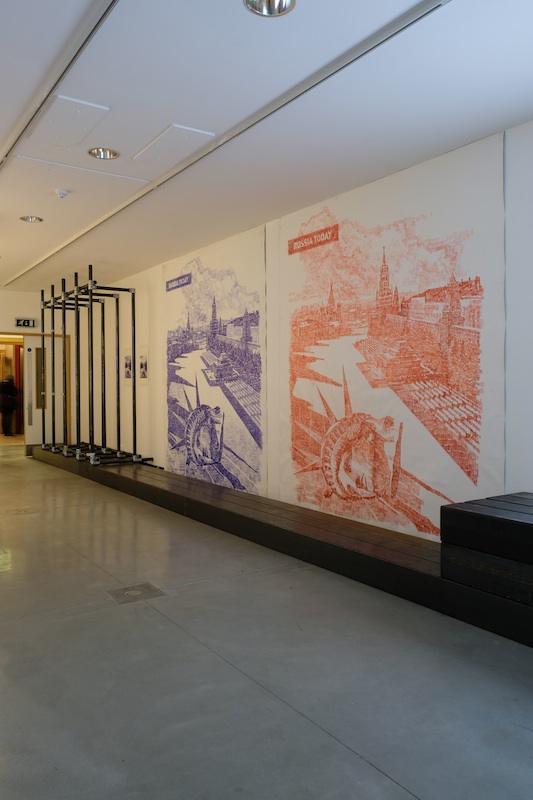 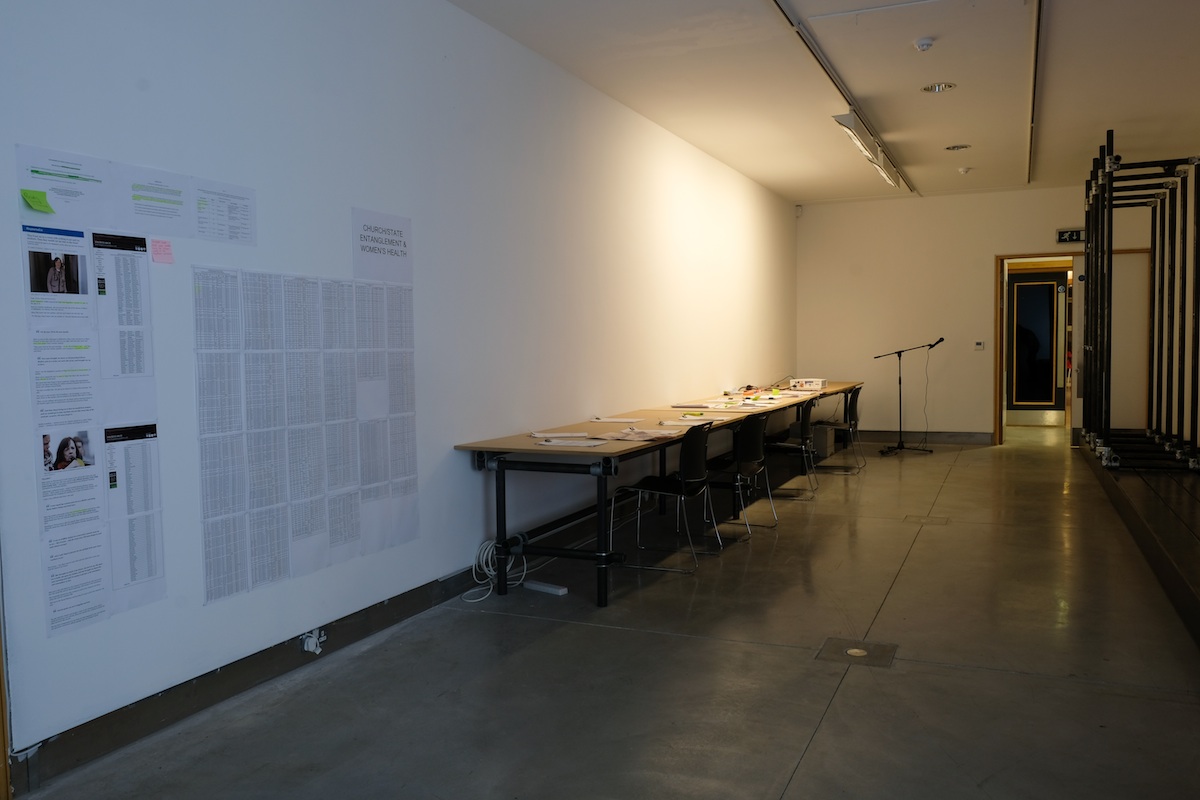 Throughout the duration of the exhibition students from the Institute of Technology, Tallaght will form part of the installation.

This Sentence is False

There is an undercurrent flowing through the two galleries at Rua Red – an ominous, shape-shifting hum pulsing through the adjoining rooms. On the surface, Andrei Molodkin’s exhibition, Fallout Pattern, looks like an operations command centre. In Gallery One: segments of steel box form a central platform, flanked by hoardings covered in hand-drawn isometric maps. Projections of datasets glow on the modular steel structure. In Gallery Two: a group of investigators, wearing black from head to toe, convene at a dedicated workspace. Their research is visible in projections, sticky notes and printouts across the walls. Behind them, a second steel structure surrounds two large drawings in the form of front-page newsprints for Russia Today. They depict the decapitated head of the Statue of Liberty lying across Moscow’s Red Square. In the background, the ominous hum continues to rumble.

Entering Molodkin’s installation requires a deep-dive into a data stream of information cascades, existing as a reverse imagineering of war games both old and new. Drawing (in every definition) from what is described in the press release as “a set of WikiLeaks documents detailing the impact of a US nuclear missile strike on Russia”, Molodkin laboriously recreates the cartographic contours of residual material in each of the simulated nuclear fall-out maps.[1] Every hand-drawn blue ballpoint line appears to vibrate as radioactive pointillism. Further statistics from the report are projected into the gallery space from overhead, shedding light on the devastating effects of nuclear warfare. Details in each slide transition include: the amount of U.S. warheads required for two different attack scenarios, the predicted casualties and fatalities in each case, and the expected radiation contamination of the environment.[2]

In the next room, information is collated, created and published as front-page news – in the case of Molodkin’s large-scale drawings – or as war-room communications. The latter is produced as part of what Molodkin describes as “a moving performance”, involving 4th year students from the Institute of Technology in Tallaght, who meet once a week and respond to a brief that explores “systems that enable the world to function”.[3] Their data-action comes across as a form of opposition research to an info-invasion, developing new forms of language to use within the ‘Infosphere’. This collaborative element to Fallout Pattern also adheres to Molodkin’s Constructivist background, based on the ethos that artists are an integral part of society, and have the ability to effect change through artistic means. He explains, “I want people to be aware that they are part of the global world and they have the ability to change it. I believe in experimentation and I would like to use the gallery as an experimental place where I can observe how the work communicates and how it operates as a language”.[4] Language, after all, is what everything traversing the network is abstracted to in order to become a currency for exchange.

Molodkin’s artworks have often incorporated raw material as a way of examining unknown or hidden systems. Stemming from his experience in the Soviet army transporting military equipment across vast distances by train, he has used blood, oil, and now data, to examine tensions between culture, ideology and power. In an interview with Rua Red director Maolíosa Boyle and the artist Jonathan Cummins, Molodkin breaks down the exhibition as follows: “In Gallery 1 there is the attack and in Gallery 2 there is the response. In my work, I appropriate things, I use imagery that already exists in the world. I take real things such as cultural symbols and make them political such as the Liberty head. I make culture speak about politics. I take things and I change the context to create a new narrative”.[5] Often incorporating factory products into his work, Molodkin’s use of over ten tonnes of steel in this exhibition, kept in its raw, engineered form, is a nod to both the industrial town in Northern Russia where Molodkin was born, and The Foundry in Maubourguet, France – a disused armament factory run by the not-for-profit organisation a/political, where Molodkin develops and produces most of his work. In the context of Fallout Pattern, steel and data begin to emerge as the parts and bits of a much larger network of global flows and cross-border exchanges. Could they be the reinforcement for the algorithmically homogenising echo chambers, as exemplified by social media platforms?

It will be interesting to see how the information exchange among the group of researchers develops over the course of the exhibition, especially at a time when communities are rapidly dissolving into a loose network of ‘dividuals’, and the communicative means of a younger generation is increasingly influenced by machine vision. As data continues to be weaponised through misinformation and censorship, Fallout Pattern is a provocative transgression that points towards the subversive potential of art. Brian Holmes writes in Escape the Overcode: “It’s not about resisting the continual mutations of capitalism from a retrenched identity position, a class status, a locally instituted cultural tradition. It’s about allowing the inherited forms of solidarity and struggle to morph, hybridize or even completely dissolve in the process of encountering and appropriating the new toolkits, conceptual frames and spatial imaginaries of the present. Power flows through the individuals and groups who constitute a social network. It’s generated by their productive activity, so it can always be twisted away from functional paths and channelled in different directions, to meet existential needs or to explore wild and unpredictable desires”. Molodkin’s exhibition acts as a stark reminder that it is always possible to change the rules of the game. You just have to learn to stop worrying and love the bomb.