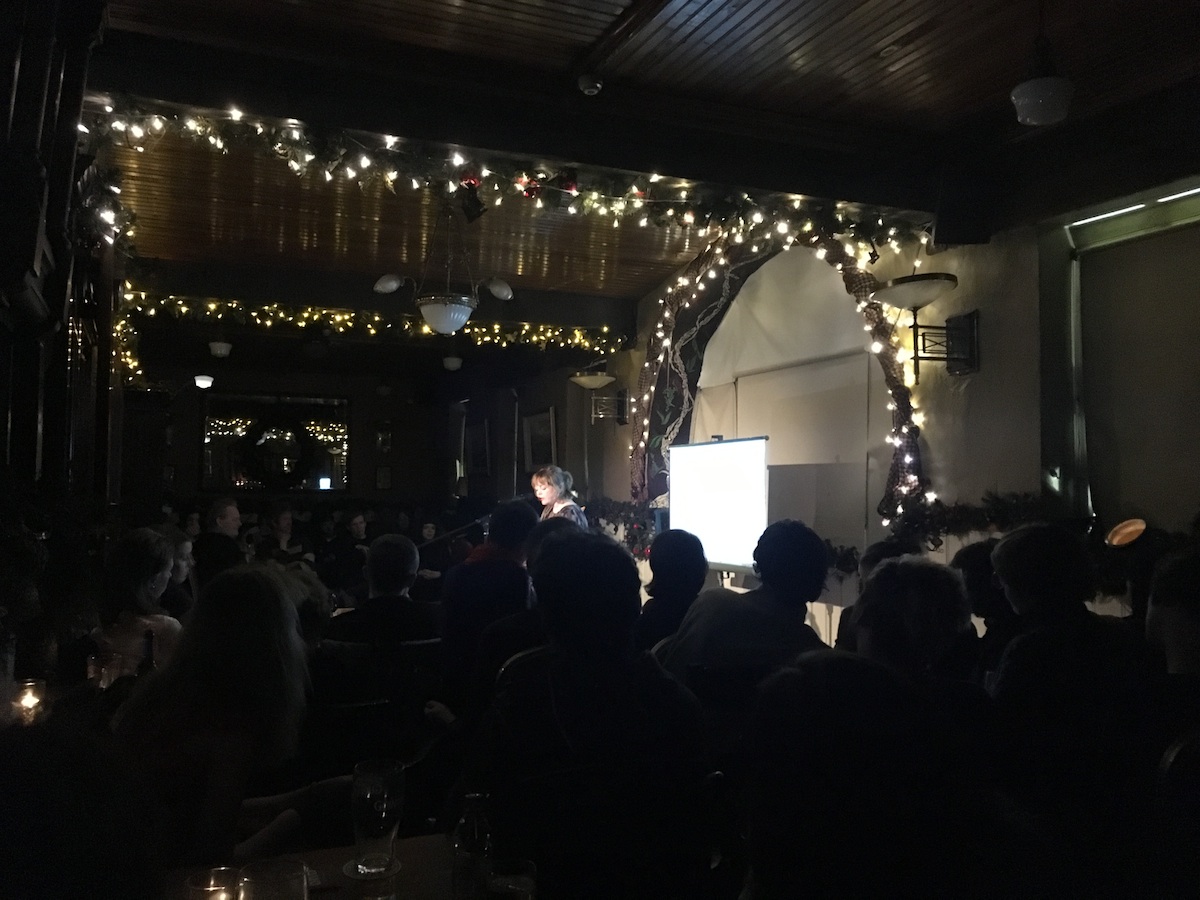 Megan Nolan, extract from \'Acts of Desperation\' (working title) at Foaming At The Mouth, photography by Jack Hogan.

Foaming At The Mouth, curated by Emer Lynch and Tracy Hanna

I’ve been guilty of it more times than I care to admit. I’ve done it sipping a glass of wine at a friend’s exhibition or sitting chatting about ideas in their studio: casually glazing over the more questionable parts of their artistic endeavours. I’ve done it to be supportive to those brave enough to do it, to encourage art to keep being made because you never know when something’s going to turn around and succeed in a way that really means something to you, even if (let’s face it) this rarely happens.

It did happen at Foaming At The Mouth though, the ‘art writing’ performance event that’s been popping up in pubs around Dublin (and once in Amsterdam) every so often over the last five years, curated by Emer Lynch and Tracy Hanna. I went to the latest instalment at Nancy Hands Bar when I was home last Christmas and (happily) paid a tenner in for the first time. FATM describes itself as a ‘visual art spoken word night’ offering a platform to artists and writers and people in between to perform something – anything – they like, resulting in a hodgepodge evening of decidedly de-institutionalised literary-cum-artistic staged experiments.

Since the beginning, FATM has been brilliant. Unlike other ‘experimental’ art endeavours (MOMA’s Artists Experiment initiative comes to mind), there is something real at stake here where participants are constantly running the risk of public failure in realtime – but even this key to its success is a contradiction, because it’s not quite clear what constitutes failure for us outside of the gallery walls. In every iteration there have been both extremely rewarding performances alongside the not so rewarding, and this you ought to expect and value from a truly experimental event. Lily Cahill’s and Megan Nolan’s separate readings were particularly excellent, for example, where both personal stories felt acutely symptomatic of a widespread state of just getting on with things: beautiful and refreshing for just being there, in public, away from any structured cultural context.

These performances were also accompanied by less pleasant ones; a gruelling, thirty-minute sound poetry improv, for instance, seemed to be the biggest test to the crowd’s good nature. As an event that bases itself on the premise of the experiment this blip ought not to matter, but now as FATM has reached its eighth iteration, it’s not really an experiment anymore, is it? It has its established structure, its calibre of artists (who actually get paid, it’s important to note) and its paying customers. It’s set a bar, which is a good thing, but this also means that it no longer occupies such an artsy no-man’s-land for visual and literary creatives (i.e. the outsider’s outsider, i.e. the could-not-be-more-insider insider). And so it comes back to our passivity masked as goodwill, the bad habit of the frustrating and contradictory yet wonderfully tentative art community. Events like this ought to be nourished, but to do so truly we, as an audience, have a responsibility to say when a work is unsuccessful, even if just for a moment. If we don’t, we may all just end up listening to the same song on repeat.