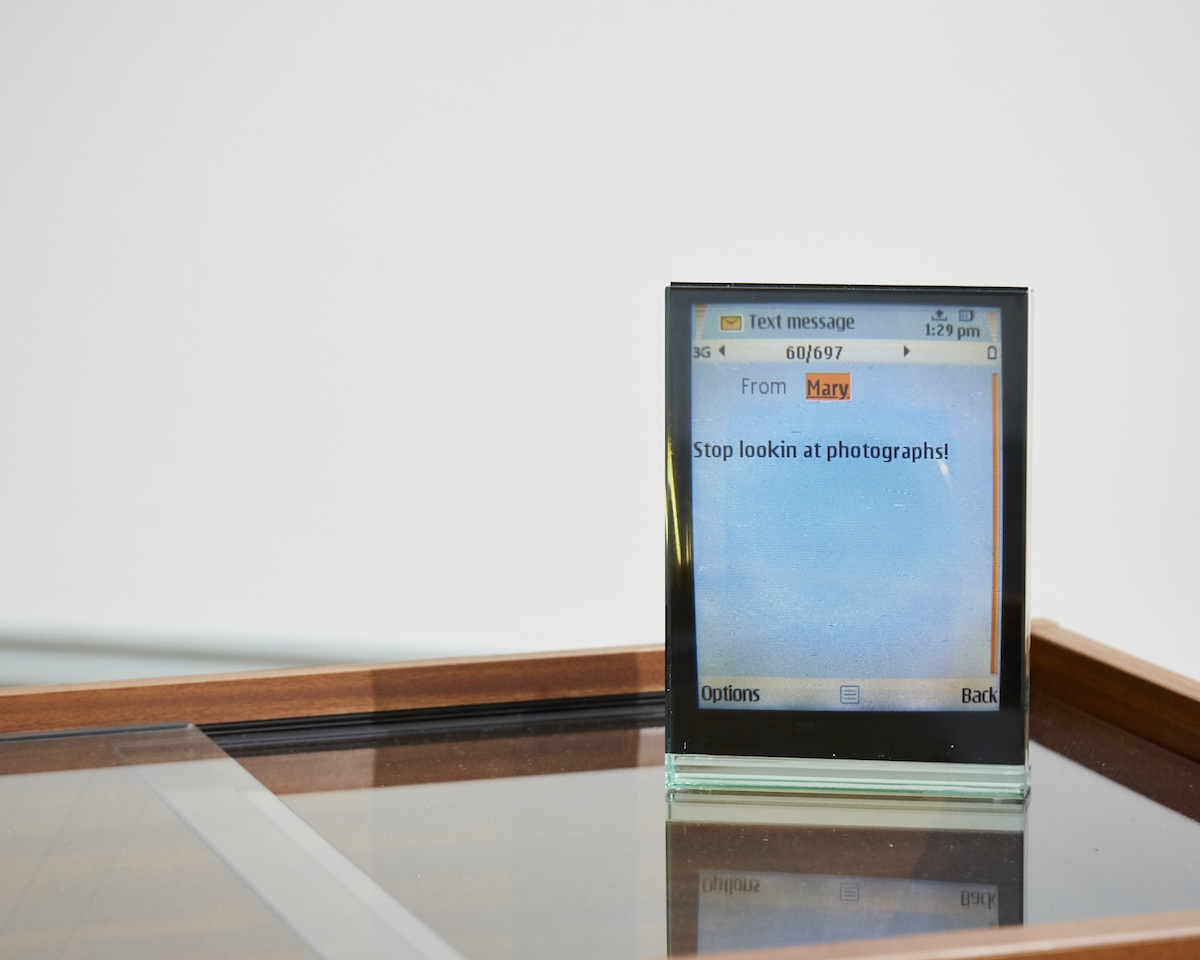 Even supposedly dematerialised digital images, if they are to be viewed by humans, are accessed through an object of some kind, be it a screen, a projector or a print. In Locky Morris’ recent show at The Naughton Gallery, each of the thirteen works arranged precisely along the length of the corridor-like space incorporated a photographic image of one sort or another. For Morris, the physicality of images is a given. He treats them as objects, as things on a par with the other residual traces of everyday to-ing and fro-ing that comprise his sculptural vocabulary. His work spins this personal idiom into terse conversational exchanges embedded with double-entendres, puns and linguistic sleights of hand. Each work radiates a deep sense of experienced time, employing a mode of embodied address which exceeds mere viewing. Narrative strands, drawn from anecdotes and implied by the properties of mundane matter, are braided into conceptual tethers and slingshots, three-dimensional catalysts for profound existential reflection.

On arriving at the gallery, I wove my way slowly between the works to the double doors at the end of the room and back again, passing through their lines of communication as they gathered there together, circulating, thinking, laughing out loud and remembering. Each radiated a powerful sense of the bodies that had brushed against its constituents before they had been bound into their current configuration. And yet, such was the sense of synthesis, of right-ness, that each also felt like it had been grown organically in the spot where it had been placed, like there was never any possibility it might have held a form other that the one it took at that precise moment of encounter.

In The Last (2011), a snapshot-sized laser crystal photo frame and a similarly sized piece of dark grey foam are arranged on a small white wall-mounted shelf, slightly offset from each other. Both lean back against the wall at a slight angle. The frame is foregrounded and etched with a scene in which a group of people are gathered, the backs of their heads just visible beyond a suburban hedge. The ensemble hovers just beyond rational assimilation, like a haiku composed by David Lynch, dense and unheimlich.

Michaelangelo’s House (2013) featured a photo cube, tipped up on one corner and rotating, a form suggesting abundance and variety, an efficient way to seduce a potential customer. Morris places it under perspex on a plinth like a museum artefact and fills it with six identical photos of a building shrouded in scaffolding. This kind of deadpan humour was everywhere in the gallery, as was the work’s concern with techniques of display. In fact, the show acted like a lexicon in this regard with images hung, supported and propped in diverse framing arrangements, both domestic and professional.

Placed near the gallery entrance, Stop Lookin’ at Photographs (2016) flipped a glass-doored cabinet onto its back, repurposing it as a host for a cardboard box stuffed with photos. A screenshot of the SMS message which lends the work its title was placed in a thick transparent mount. It sat atop the glass like an ornament on a mantlepiece, the blown up display looking like a dumb phone apparition, a static stand-in bled of all its digital dynamism. This eye for the absurd is key to Morris’ alchemy. In his work, complexity, opacity and humour oscillate with their opposites, propagating in the process a sense of everyday troubles and joy; a sense of the way in which twenty-first century subjectivity is implicitly soldered into a proliferation of socio-political circuits at many degrees of magnification. With the ease of a knowing nod as it brushes past you on the street, Stop Lookin’ at Photographs felt like a collection of tales from a life lived in full consciousness of what living might mean.