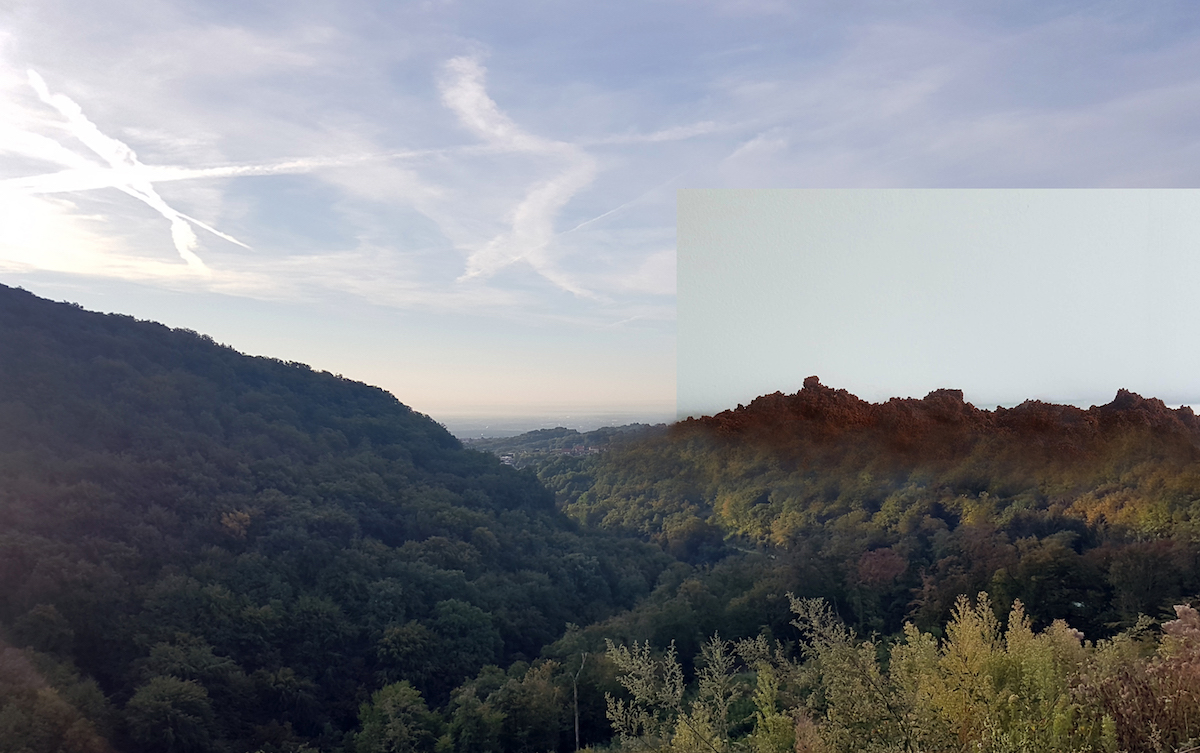 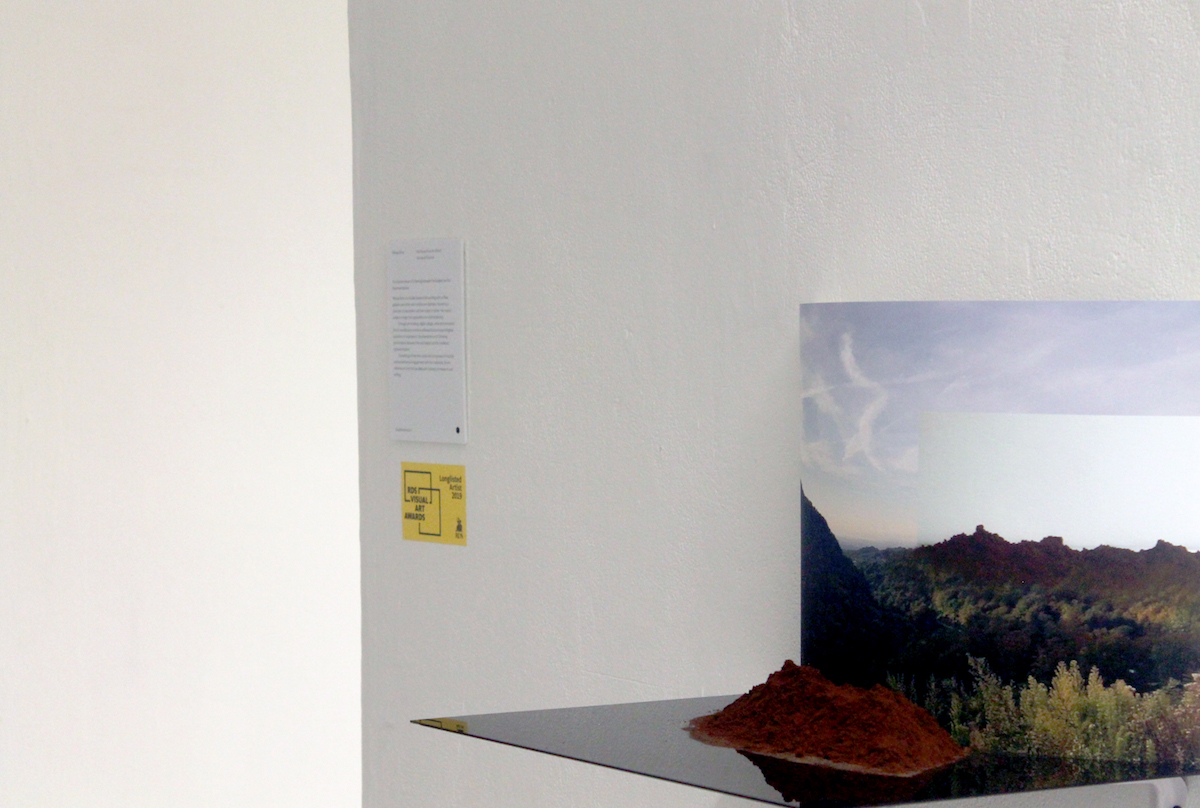 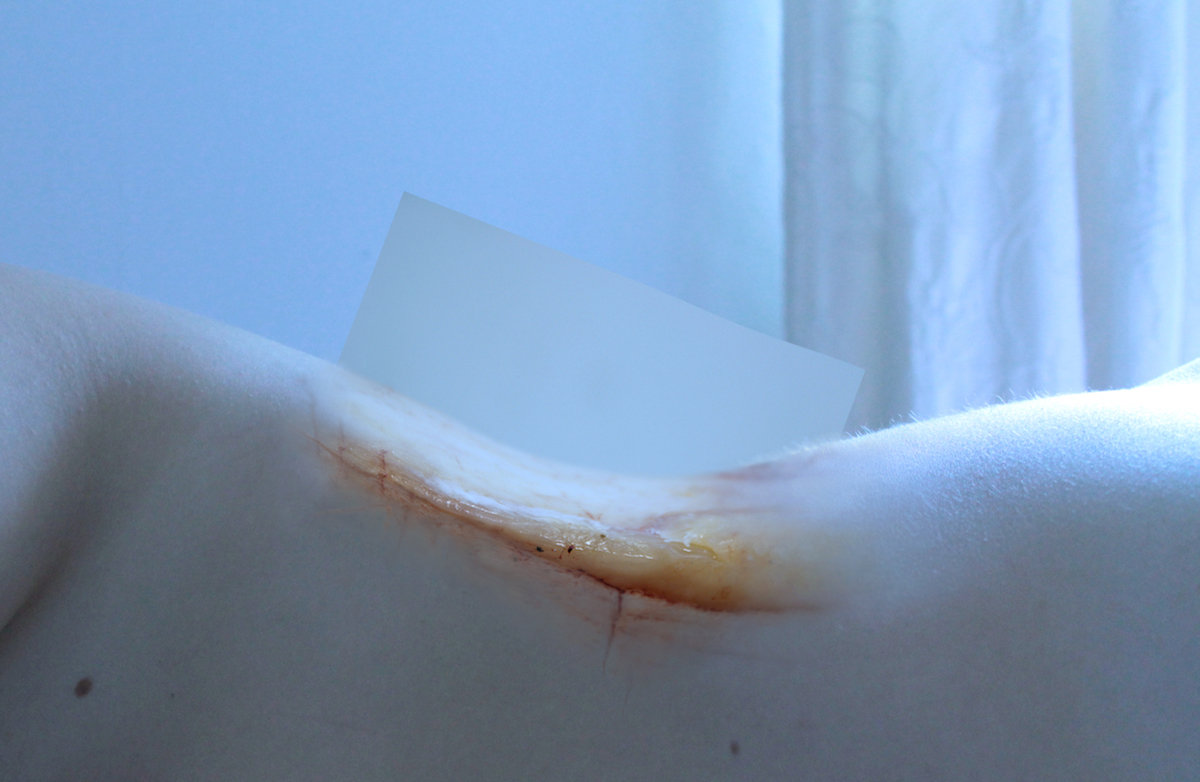 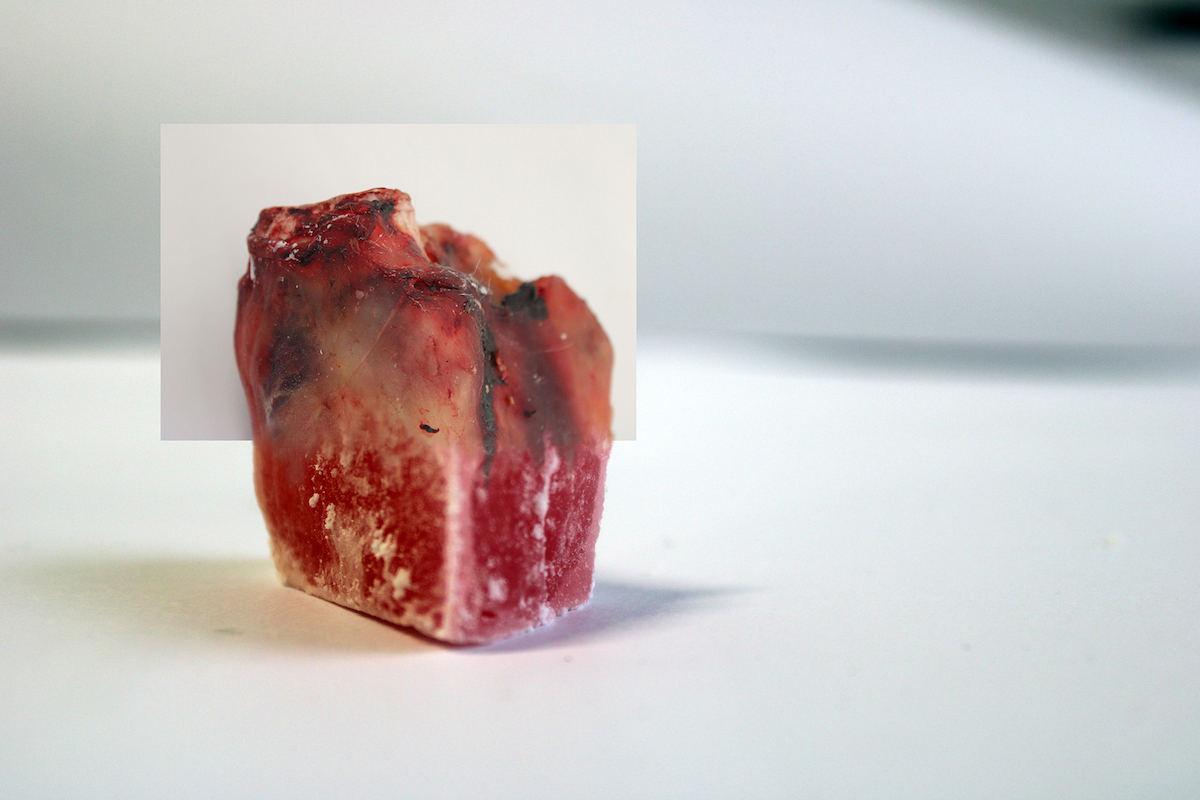 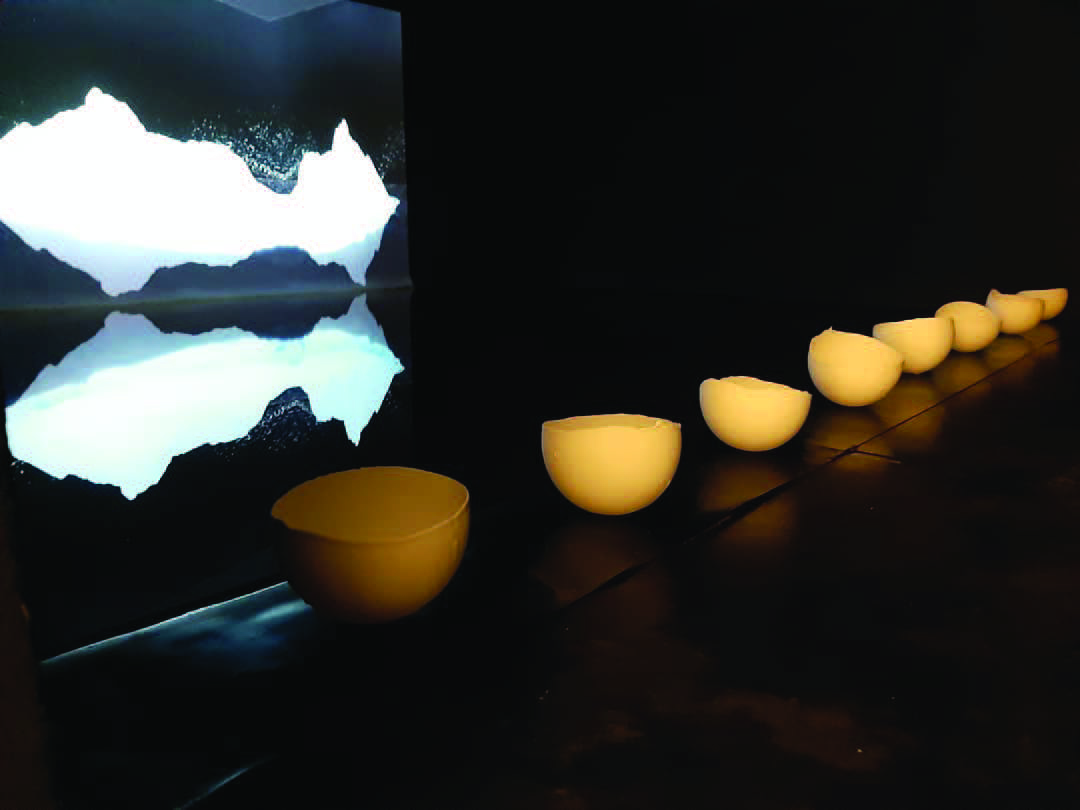 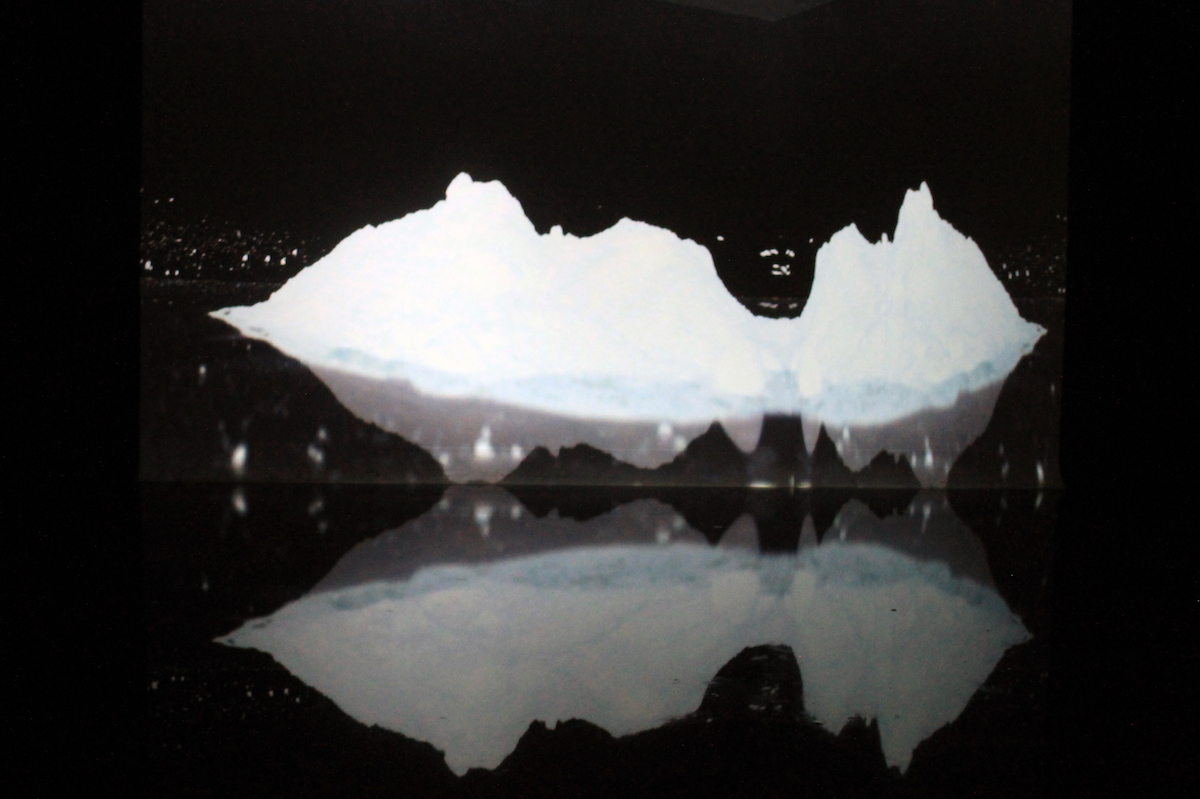 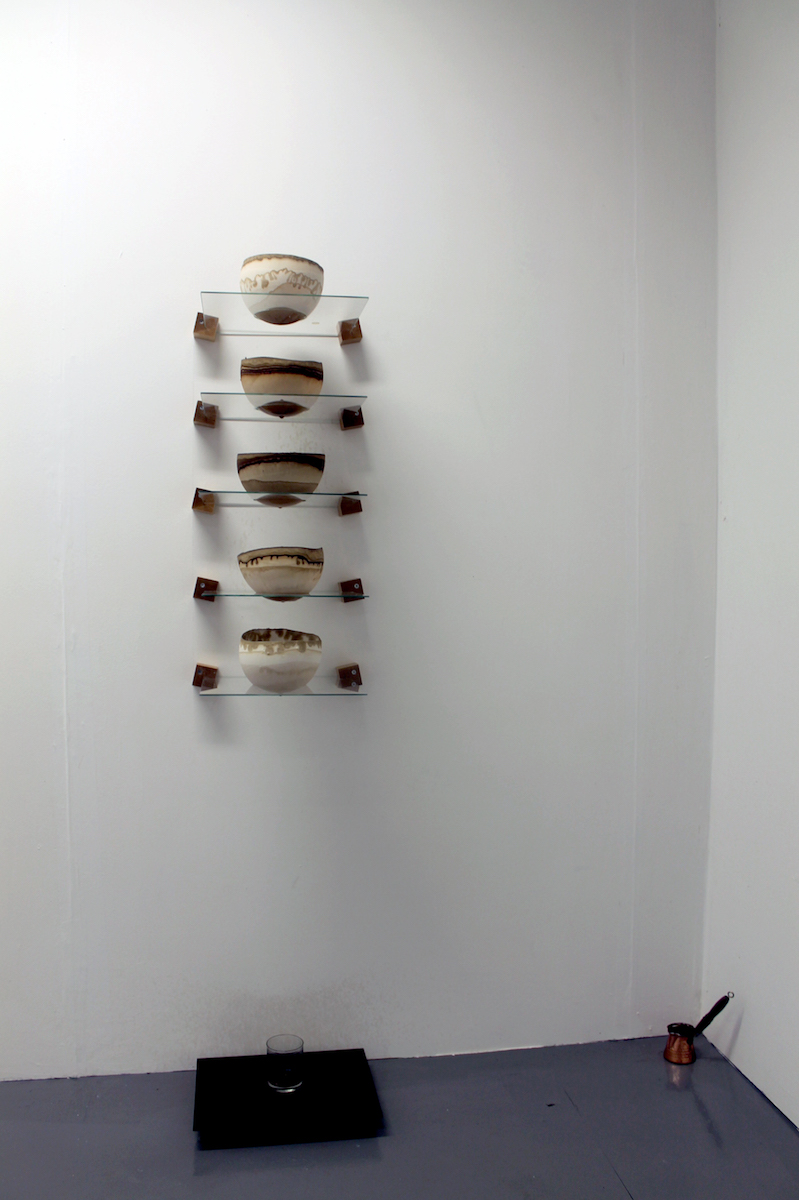 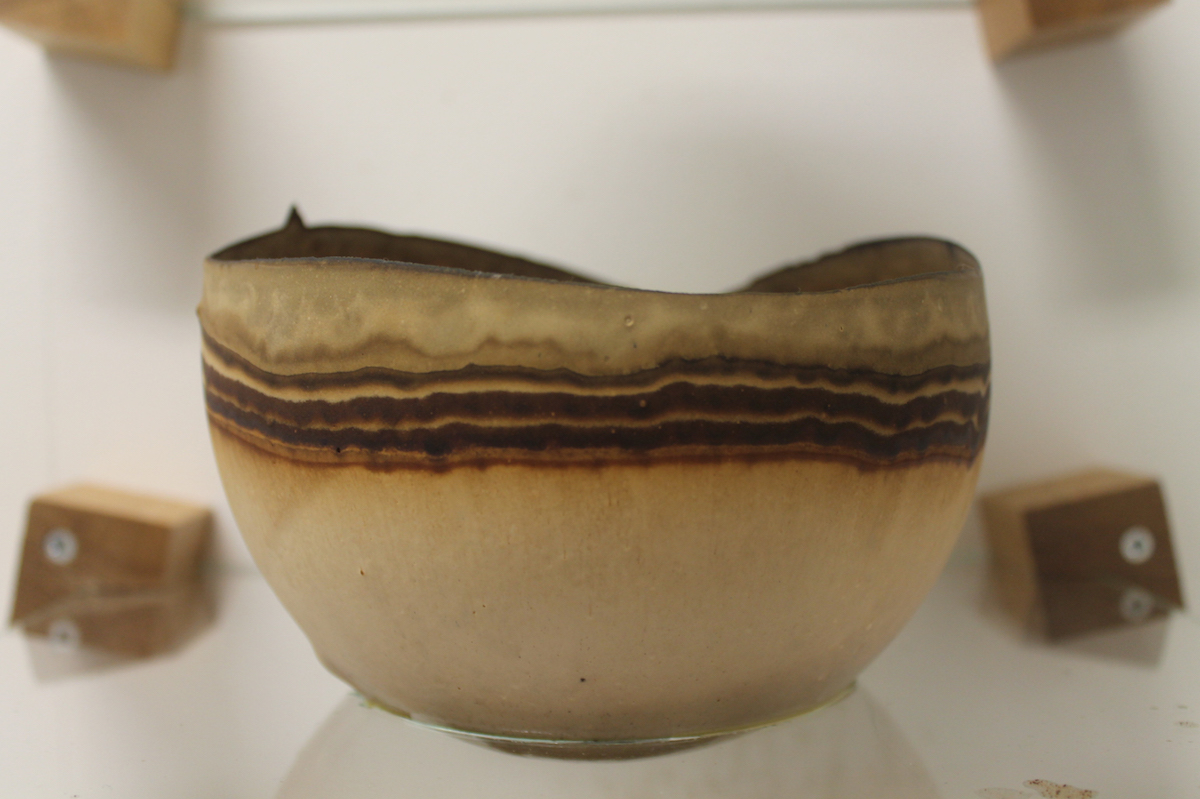 Rounding a white partition and confronting the work of Mateja Šmic felt like alighting in an uncannily familiar zone, a materialised mock-up of experience, where conditions of selfhood are sensed and self-consciously exercised. The room imparted a glittering discomfiture like a surgery or high street window.

A shelf of black glass, jutting at elbow height, supported a print which was pinched in concave from the wall: Zagreb/Synthesis. Marbled, wispy lilac-blue crown its fertile, dark hills. These are serrated with trees, a receding cross-hatched valley like a picture-dictionary entry on perspective. One section is pallid, cropped in a razor blade halo. Mimicking its topography, in front of the print was a small heap of ground coffee.

Šmic’s research has ramified from an examination of self and heritage to encompass critiques of political and cultural perspectives on the Balkan peninsula, via psychoanalytic models of subject formation. The Phenomenon of Othering Between the Subject and its Representations comprised refined, derivative products, works seeming to embody or elicit the performance of obscure dynamics. Articulations of self amid constellated allusions – tropes of nationhood and coffee shop paraphernalia – they posited a rhetoric of self-knowledge, dynamic and mercurial. Ethnographic details of scientific procedure were clouded in the affective tugs of powdery consumables. Gobbets of Turkish Delight became dread incarnate, ground coffee an umber seduction trailing political context.

In the large print Ache/Apoptosis, rotated on her hip in a blueish interior, a body close-up framed a horizon, the side sliced and revealing something gelatinous. Ascending behind the dipped waist, implausibly, was another cropped shape like a Bohemian blade – a recurrent suggestion of a circulating fragmentariness in images, their depth and sharp resistance. This obscenely literal insertion stressed a crude urgency in the perceptual field. In the second, darkened room, white peaks, sugar or drugs, eroded and accreted soundlessly on loop. This was Deconstruction of a mountain/Equilibrium, a projected video reflected in an expansive pool of Turkish coffee which was tangy on the floor. Its limit corralled viewers in a narrow path from the doorway, affording perspective on extremes of scale suggesting subjective perception encompassed in a cultural world. It was bordered by a sequence of cranium-like vessels lit in a gentle nicotine light, exquisitely thin and susceptible.