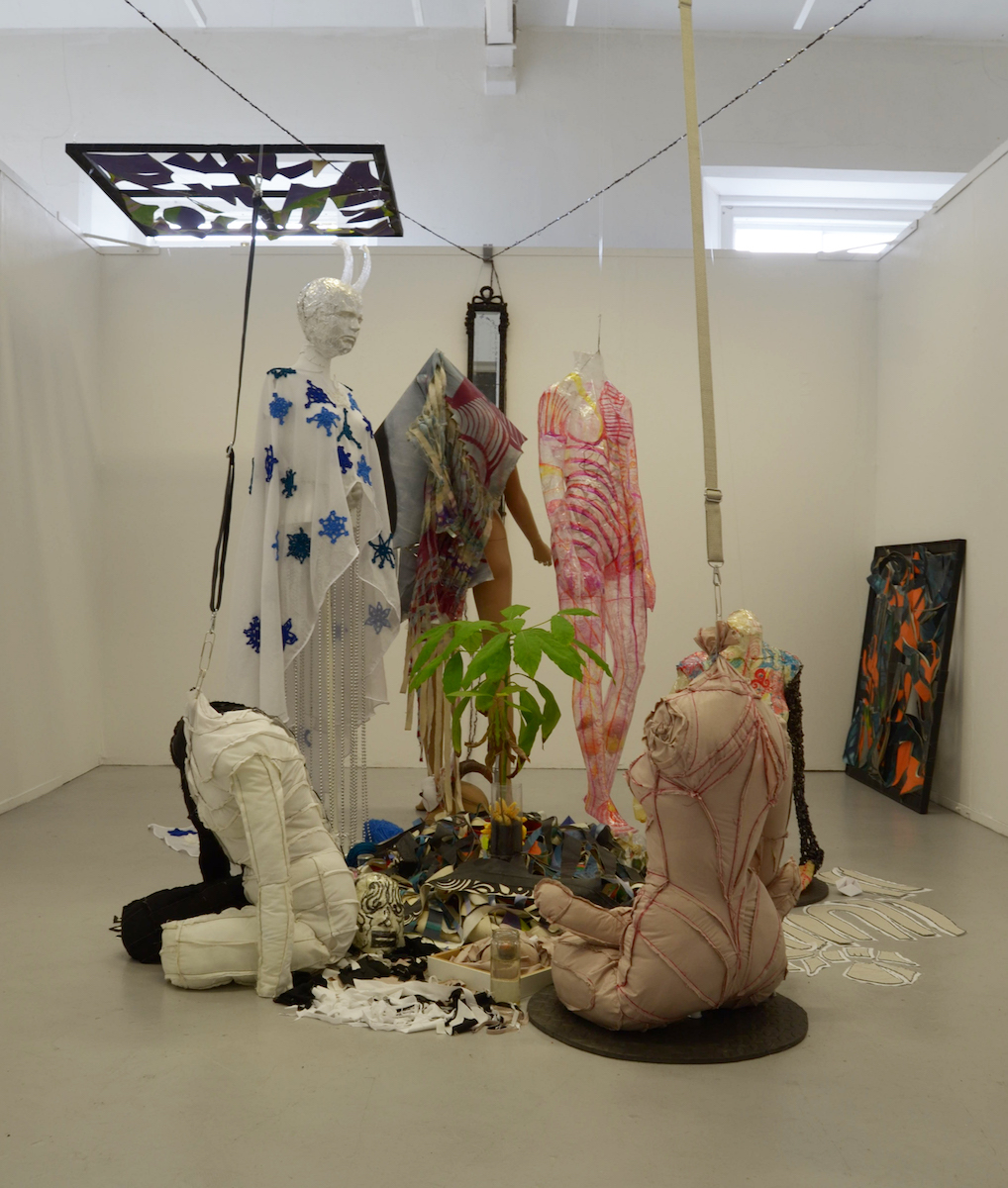 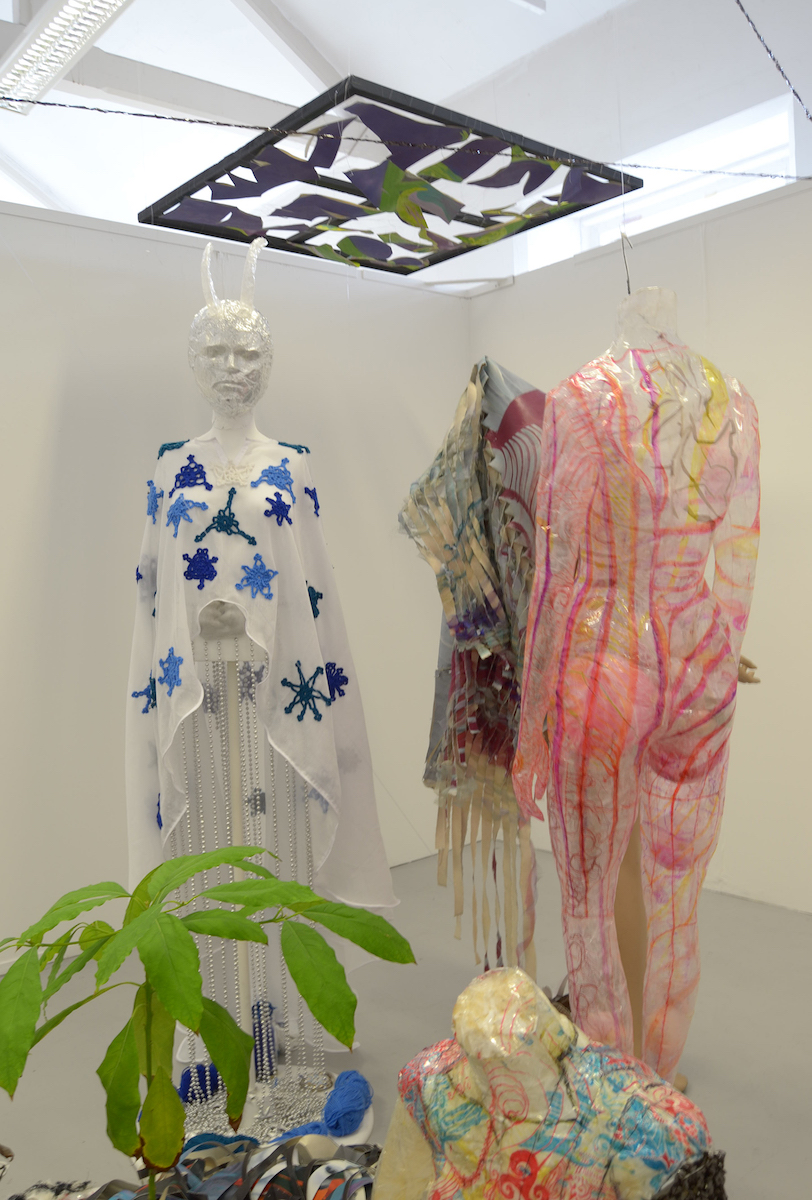 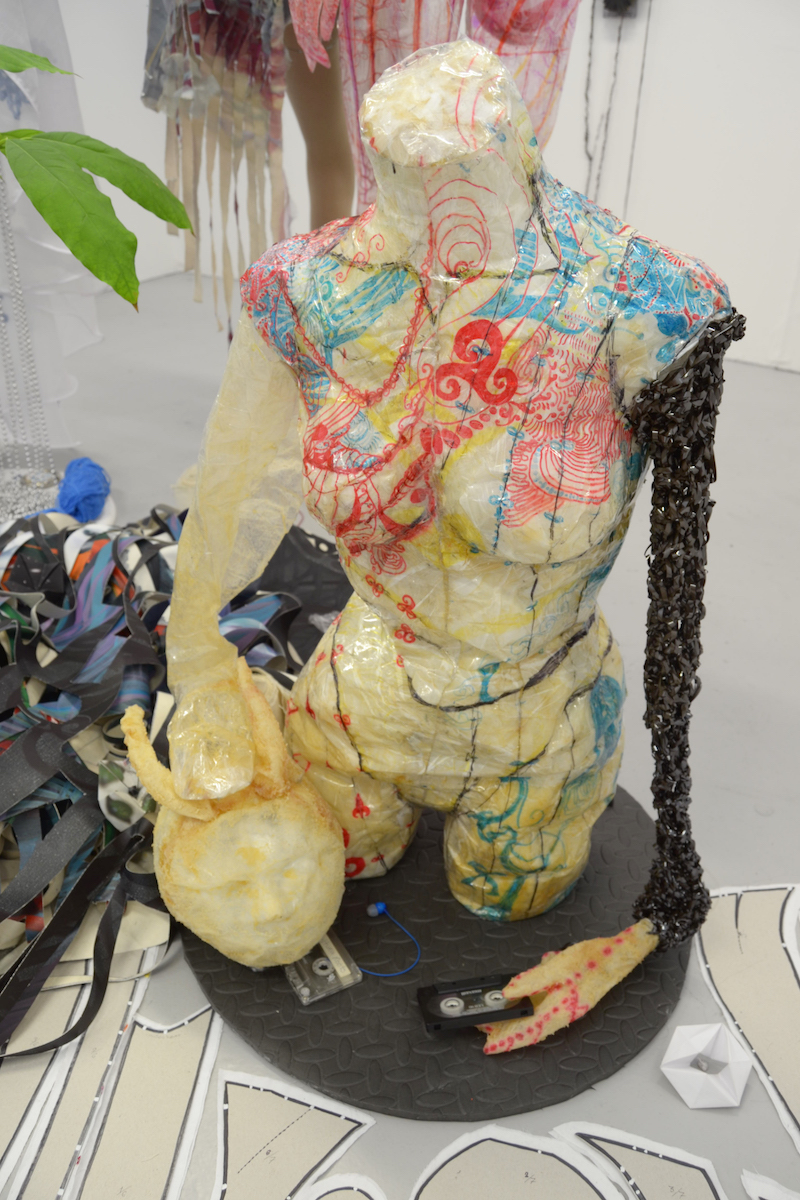 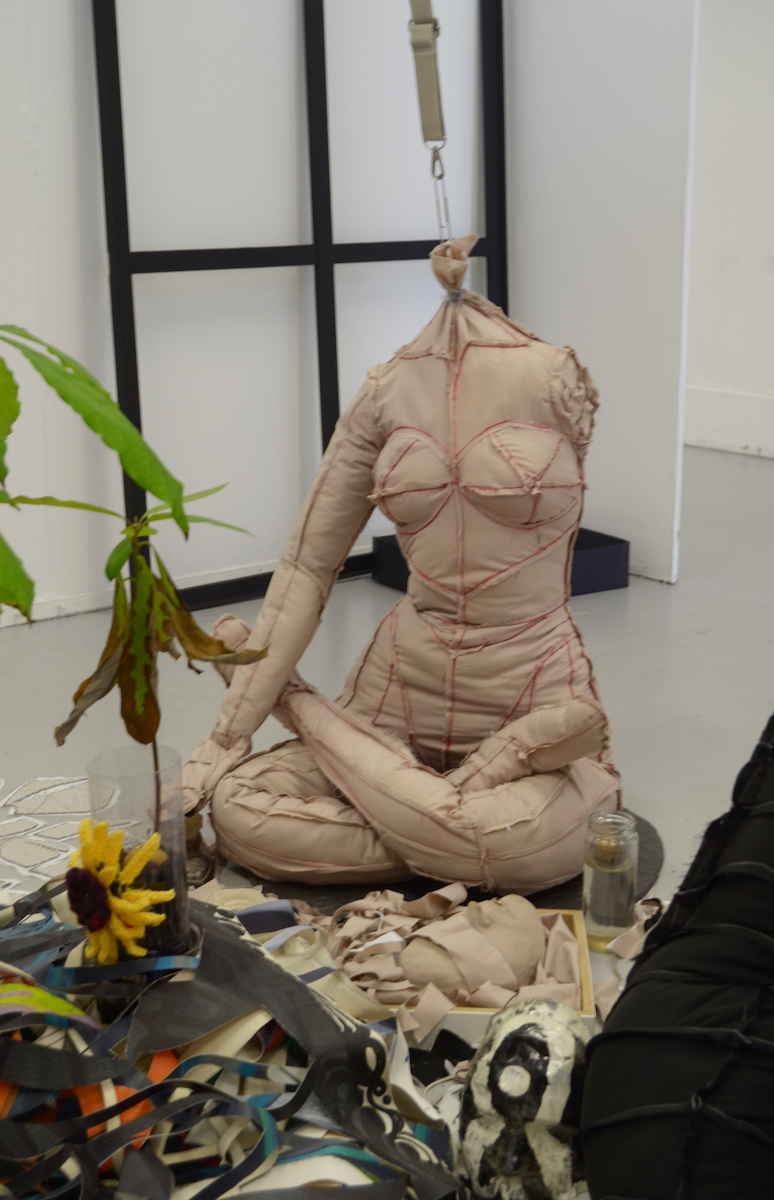 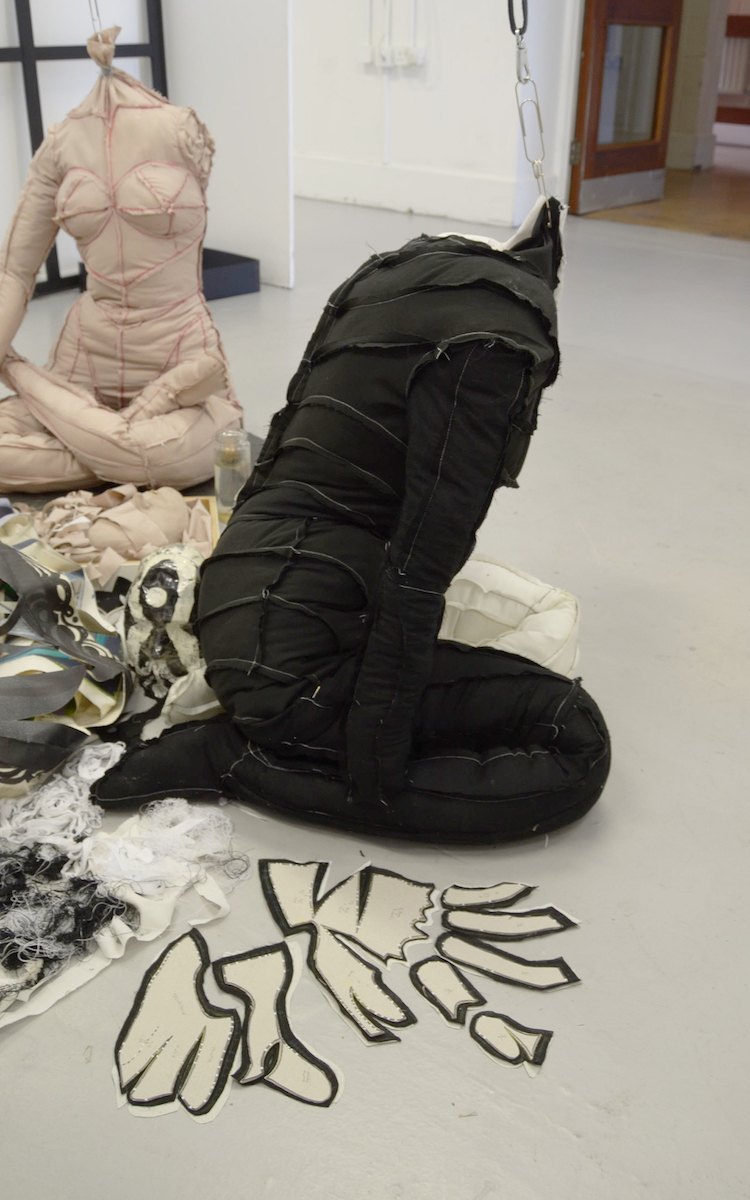 Despite its diminutive size – or perhaps because of it – WIT’s eleven-strong class of 2019 present a show as notable for its variety as for the cohesion provided by a good collective sense of materiality, a sense that is clearly embodied in Kat Cordeux’s work.

Arranged around a nest of cut strips of painted canvas and audio tape from which sprouts a broad-leafed plant, are six, life-sized figures – all but one headless. Two, made from fabric and stuffed, are held up by brutally practical straps clipped on with carabiners one, slumped, recalls a yin yang symbol, black on one side, white on the other. The next, flesh coloured and one-armed sits in the lotus position, back straight. The next figure is legless but free-standing, made of clear tape and decorated with brightly coloured tattoos reminiscent of hennaed designs on Indian brides she holds her head in her right hand. The figure alongside is also transparent but in possession of all her limbs, and suspended slightly above the ground. She is decorated with colourful drawn lines and embedded threads, the shed skin of a now transcendent being. Then, this developmental spiral, which seems to spin from the basement of the psyche towards higher consciousness, is interrupted. A mannequin, only the legs visible, viciously pierced by the metal stand which supports it, is draped, weighed down by a painted and sliced canvas. At its feet a white plastic cartoon goat’s head chews on a headphone. This slight anomaly in the structure of an otherwise organised mythology, is perhaps the most interesting element as it reflects the tensions that exists throughout the whole piece: flesh and spirit, order and chance, structure and the possibility of destruction, craft and craziness.

The last figure is upright, horned with a sullen but shining face of foil. About her shoulders a white cape pinned with crocheted stars. Embedded in the tangled nest of painted canvas strips at the centre of this gathering are various object: transparent moulds of abandoned faces, audio cassettes and nests of crumpled audio tape, headphones, a crocheted spider, objects in jars, a string of sliver beads and origami fortune telling finger games of the sort girls would make in school.

There is a lot here to look at here and while sometimes it seems over wrought, in the ‘less is more’ culture of the Irish art world, the abundance is refreshing. Cordeux’s acknowledgement of her warring impulses is in the many gestures which contain the tension of opposites: the narrative arrangement of the figures in a spiral reflective of a spinning galaxy, the neatly arranged patterns ‘scattered’ on the floor and the clumsily made and sliced canvases, touching as a facsimile of feeling that is nearly contained by the structure of tradition, by the tyranny of craft. Nearly.

There is something reminiscent of Yinka Shonibare’s installation Recreating the Pastoral here and it would be nice to see this in a larger space, but where Shonibare’s craftsmanship – and perhaps the use of assistants – tends to kill off energy, Cordeux’s desire to explicate, criss-crossing with an undertow of magic and mystery, contained in oddball pairings of concepts and materials – the woolly stars! – and her allowance of imprecision to infect her exactitude, creates something nearly unique with her tiny mythological garden packed with meaning. Sometimes more is more.