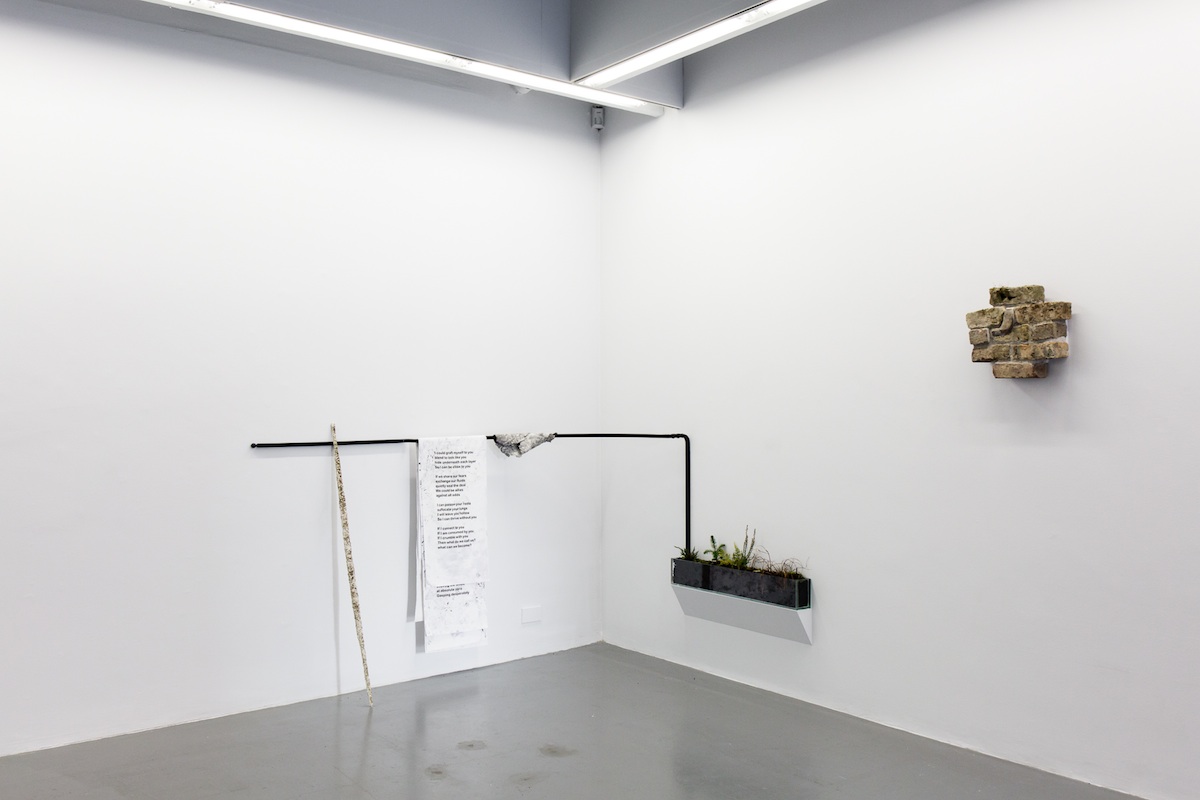 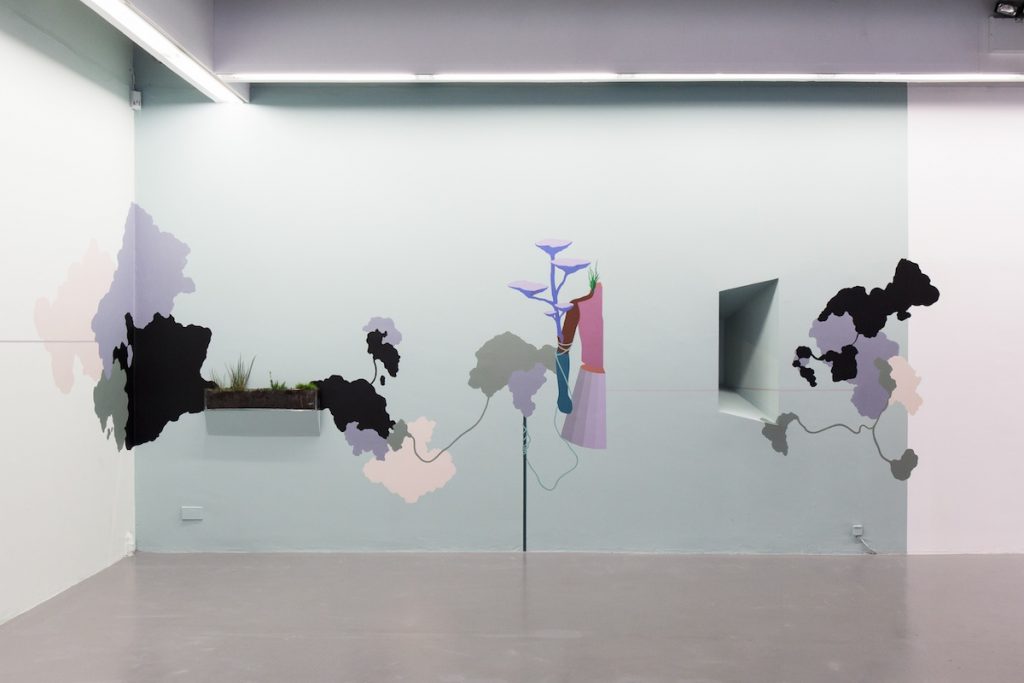 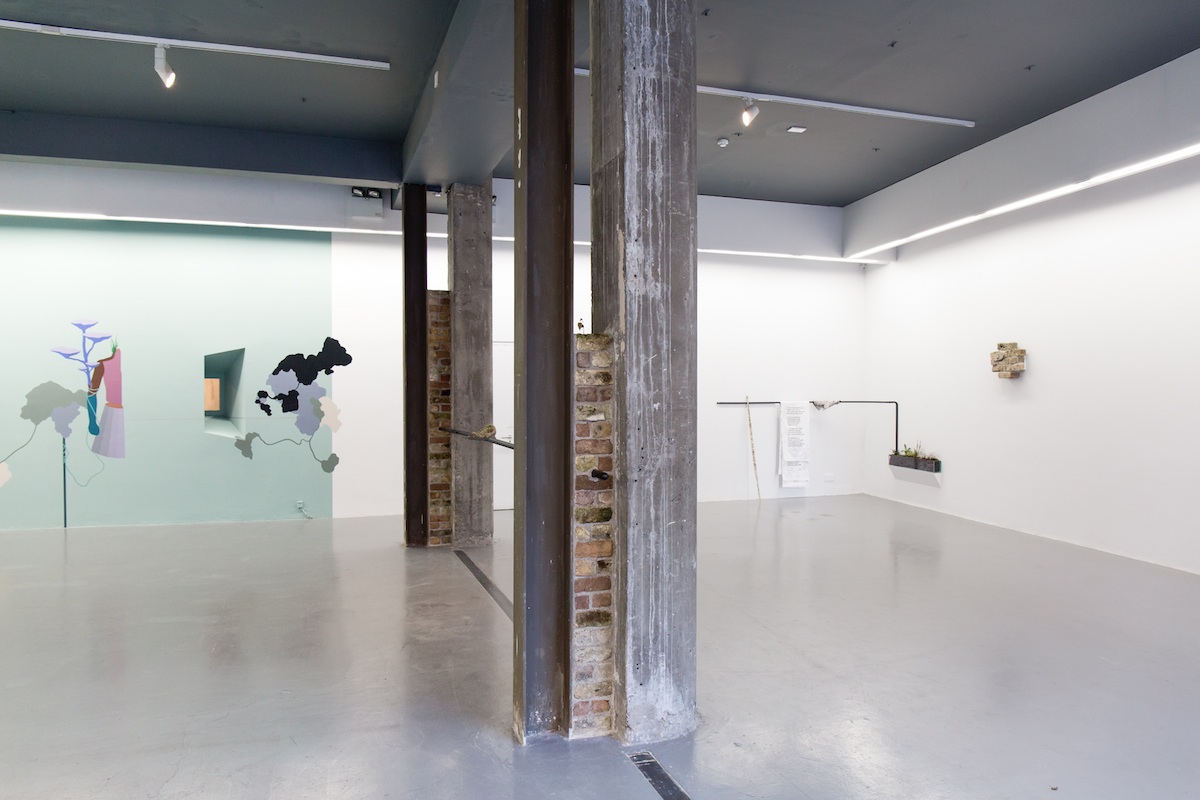 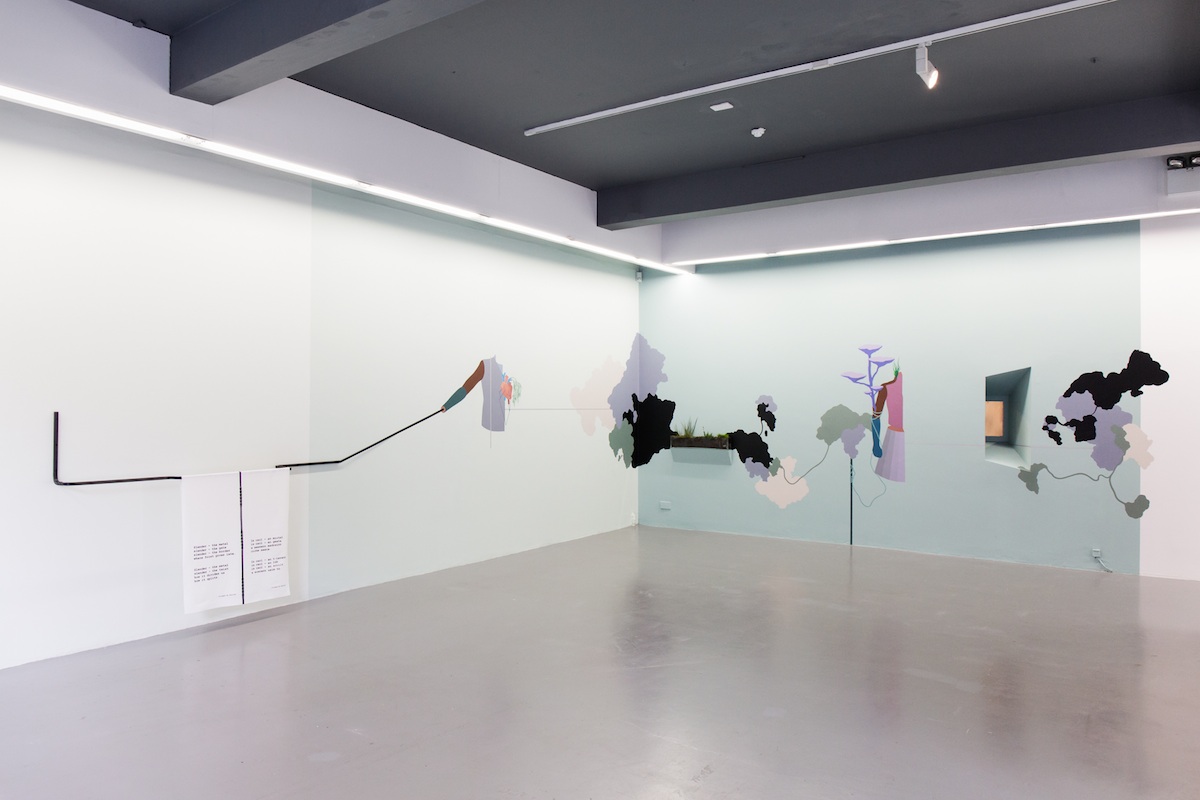 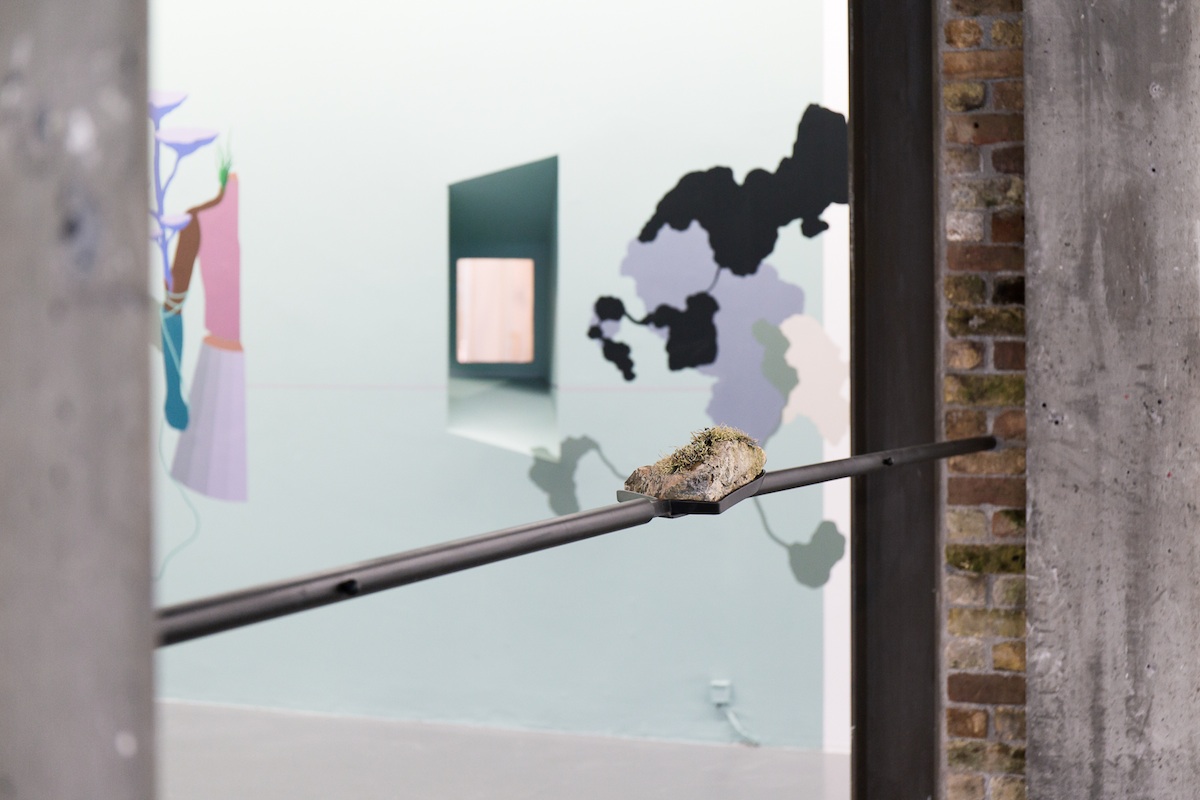 A sparse room is inhabited by a delicately wrought iron bar snaking intermittently along its edges and divisively through its centre. Unfamiliar maps and strange figures sprouting vegetative growths sprawl across its walls, and various forms of plant life accompany its oddities. This is The Breath From Fertile Grounds, an unexpected and intriguing haven in the heart of Dublin’s Temple Bar. Otobong Nkanga’s first solo show in Ireland reacts to Dublin city with an inquisitive and erudite exploration of the intersections between nature and artificiality.

Examining the distance between man and nature seemingly created by the urban condition, Nkanga questions how we interact with our habitat and its resources. She particularly considers Dublin city within a much wider history of man’s interaction with land – one fueled by our innate instincts to map our surroundings, to name, to divide, and to claim. Acknowledging borders to be an artificial product of man, Nkanga takes an archaeological approach to art-making. This exhibition represents a multi-faceted compilation of local resources, spanning centuries of identities and histories in Ireland. Its wrought iron bars are characterised by an ornate twist, a technique dually inspired by the ancient torcs on display at the National Botanical Gardens, and by the fences that divide and demarcate Georgian Dublin. Poetry written in both Irish and English by Doireann Ní Ghríofa hangs from banners along these bars, considering the ways in which we manipulate materials and language to fuse identity with place.

This is a sensitive and measured reaction to the city, not forgetting Ireland’s complex relationship to territory, colonisation, and resistance. Plants emerging from the concrete walls evoke a kind of earthy rebellion, as natural growths rise to the surface, clinging for survival despite urban boundaries. Nkanga cites this resistance to be in keeping with the Irish spirit, its identity, and its history. Boundaries are unstable, and territory becomes a grey area of flux and flow. Natural resources defy man-made borders, and no object has a singular origin. Central to the artist’s arrangement in the space is a small stone, held in place by a horizontal bar between the gallery’s two concrete columns. The stone’s multiple species of lichen and moss seem to echo the human condition, our symbiotic interaction with a habitat by settlement and cohabitation. Titled Handshake, this central focal point invites consideration of the ways in which both plants and people survive together. Nkanga’s own poetry also on display gently ponders:

If I connect to you

If I am consumed by you

If I crumble with you

Then what do we call us?

What can we become?

Nkanga’s questions are particularly pertinent today, time is pressing. As our planet desperately cries out for our attention and humanity wages war over contentious borders, we could do well to remember the multi-faceted nature of our origins. How might we survive the present moment? Connectively, collectively, perhaps.