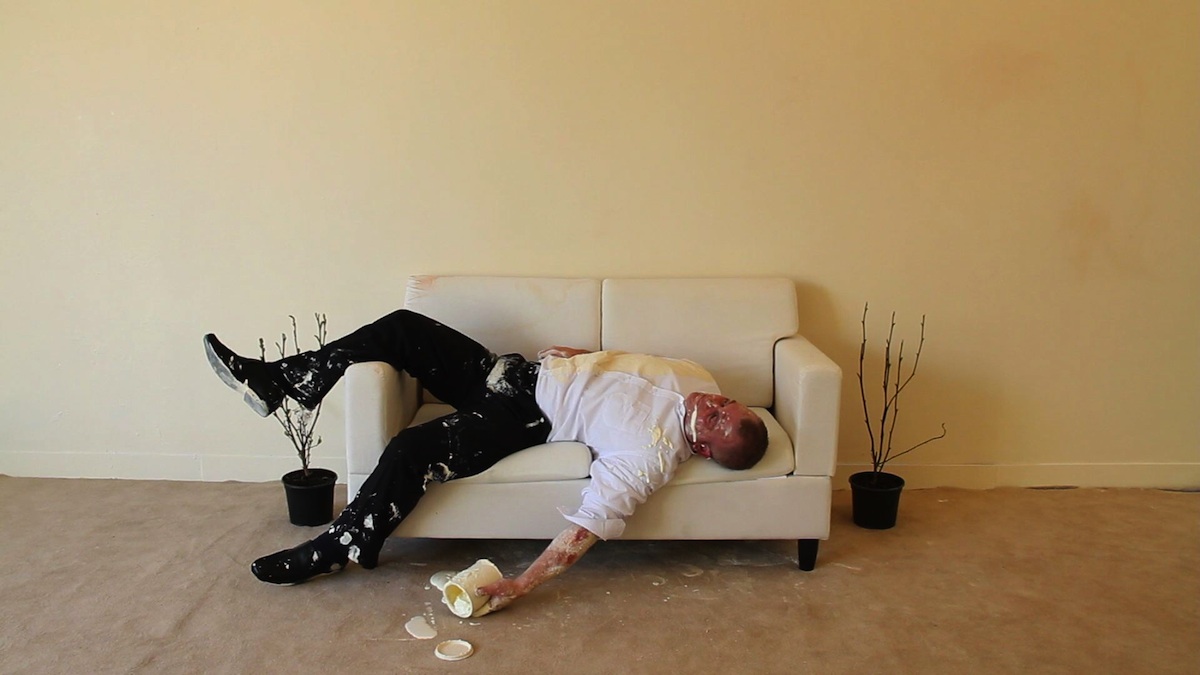 Avril Corroon’s Fresh Paint on the Walls in ‘My Brilliant Friend’ at Temple Bar Gallery and Studios.

Slurping and dribbling. Licking. Gyrating. Rubbing up against a recently painted wall. Lusting for the inanimate and lusting for the financial proceeds from the animate. Avril Corroon’s focus is the middle aged overweight stereotypical landlord – performed here by actor Jeremy Earls. Her short film presents insight into how he might behave in one of his over-inflated, under-maintained properties. Perhaps not what one would expect from a group exhibition showing works seeking to examine “female solidarity, work economy and protest.”

The usual whitewashed walls of the gallery are now magnolia, providing a subtle change from the norm with unnerving impact. Corroon’s video work Fresh Paint on the Walls is located on a flat screen TV in the far corner of the gallery. Headphones on. A loud shriek: ‘WET PAINT WET PAINT’.

The nationwide phenomenon of magnolia-washing is something many tenants in the private rental sector will be familiar with. The nine minute video combining the grotesque with the reflexive is more than just a satirical overview on the current housing crisis and the prevalent landlord culture. Corroon is part of a new wave of young politically engaged Irish artists; her work, though satirical, has the slightest hint of militancy. The positioning of the work within TBG&S might remind us that the art world operates within multiple economies, with artworks presenting as critique yet unable to avoid becoming embedded in that which they seek to critique. However, Fresh Paint on the Walls does not whitewash cause and effect or remove the artist from the problematic equation of gentrification, private landlord culture and the re-territorialisation of creativity as a driving force of capital accumulation.

As an artist in a ‘creative city’ she understands that the insatiable landlord might notice the new hipster coffee shop in the area and hike up the rent again. Which came first, the hipsters or the artists? This cyclical gentrification and consequent precarity has direct relation to her own artistic outputs and a recognition of this within the film renders Corroon’s work refreshingly fresh, much like a new coat of paint on a grimy gallery wall.