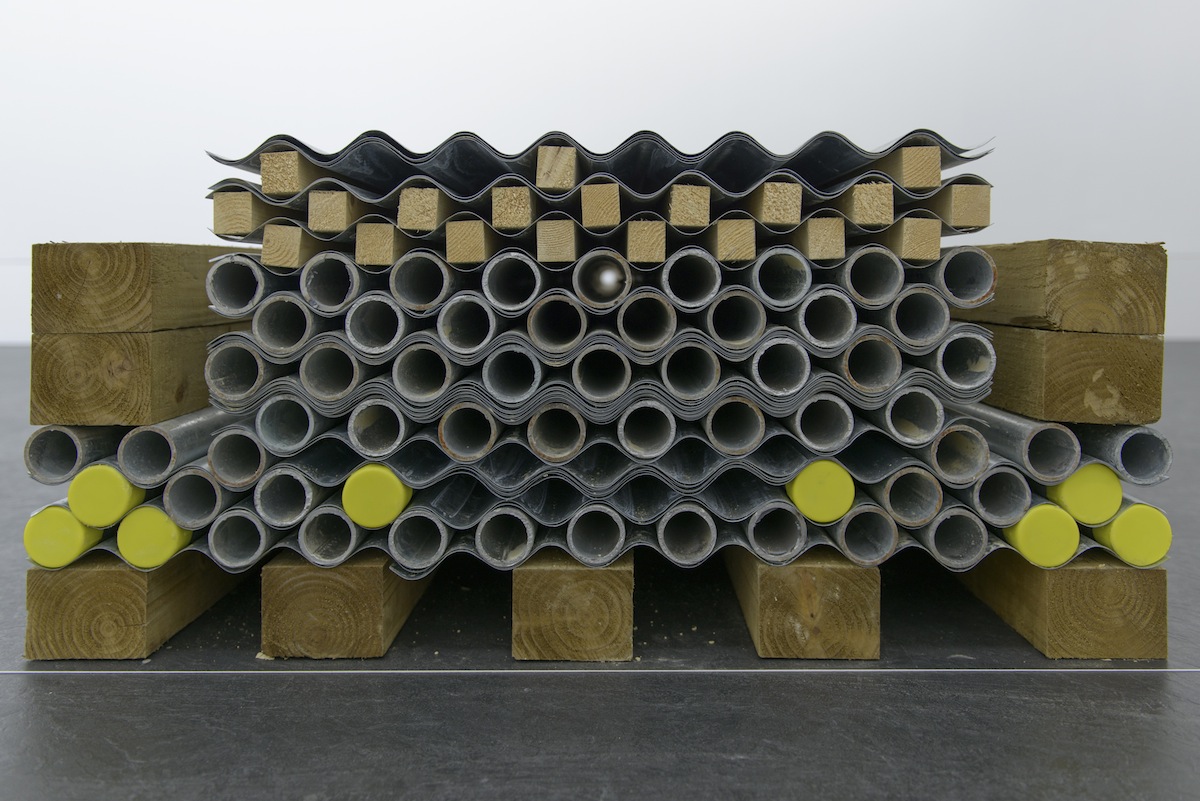 Anne Tallentire’s project, Shelter, co-commissioned by 14-18 NOW as part of the WWI centenary art commissions, considers the legacy of the Nissen hut – a semi-cylindrical structure first designed in 1916 to temporarily house troops and their supplies – and the role of emergency accommodation during times of conflict.

Corrugated iron and plastic, plywood, timber bearers and other locally sourced materials that constitute the instruction ‘kit’ used to assemble the huts are displayed in meticulously stacked grid formations. This minimalist arrangement creates a tension between the materials’ formal qualities and their capacity to provide basic shelter for a human being.

Tightly edited footage displayed on screens depicts close-ups of the performative actions of these materials being rearranged and assembled in a grid – a recurring motif in Tallentire’s practice – on the Ebrington Square army parade ground in Derry by the artist and those assisting her. The camera records the physical movement of bodies, be they material or human, and evokes comparisons to other movements: that of migrants across Europe. By using drone footage documenting this action from above, Tallentire draws our attention to the continuing development and assimilation of military technologies. The desire to witness a ‘reveal’ of the finished construction however proves to be elusive and, ultimately, never realised.

Shelter not only examines the architectures of war but also those of displacement and present-day structures symptomatic of the global movement of migrants and refugees to makeshift settlements such as ‘The Jungle’ camp at Calais. At the end of the project, Tallentire’s collaborator, architect Grainne Hassett, will create new temporary accommodation in Calais with the materials used in Shelter. Tallentire’s astute treatment of a subject that resonates with a contemporary crisis offers a welcome disruption to the many 1916 commemorative projects which only encourage passive reflection on a distant past.