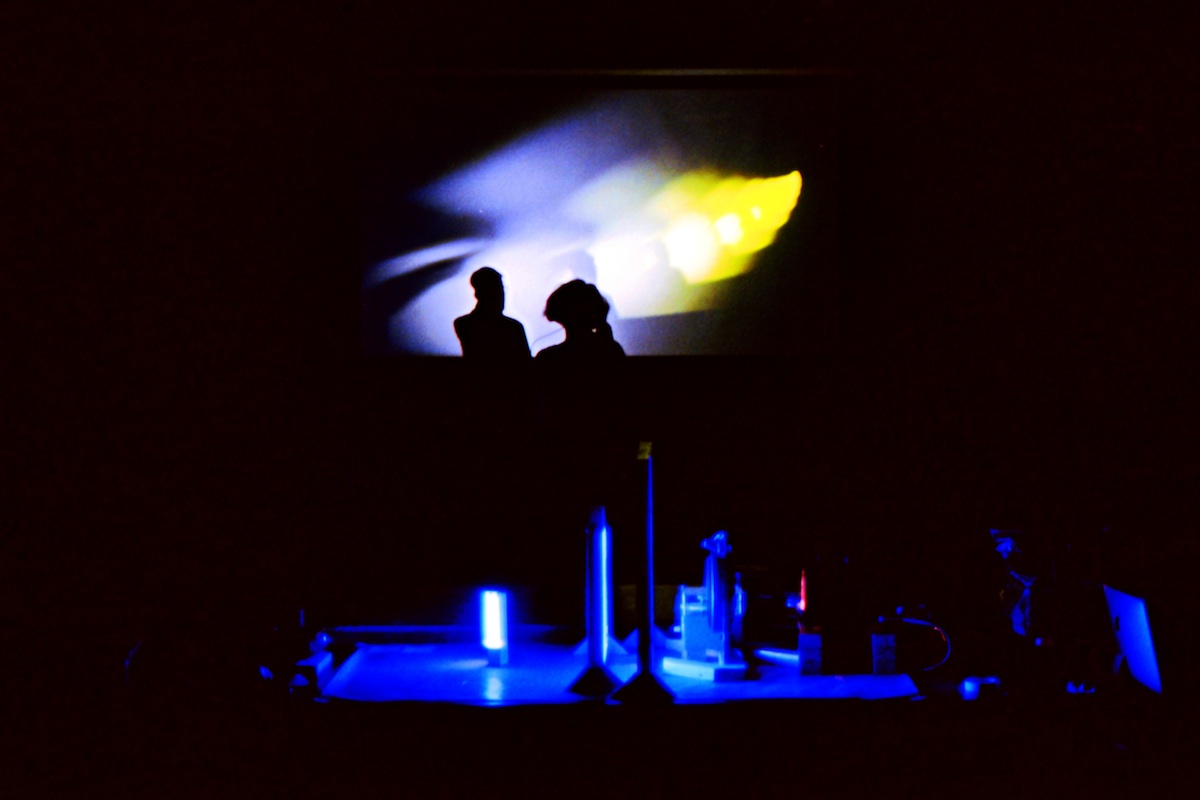 The second iteration in an ongoing series that Anja Mahler describes as exploring ‘the potential drama in properties of light’, ‘True Wholes’ took place in the basement of the Filmbase building, a rectangular space with blackened walls where near-pitch darkness is its default setting.  Invited by Experimental Film Society founder, Rouzbeh Rashidi, to generate a performance especially for the venue, Mahler attended several events there over the course of a year, familiarising herself with its cavernous atmosphere. Central to her artistic research of late is the titular Nautilus Shutter, an opto-mechanical device with little traceable provenance that she named after the pelagic mollusc, distinguished by, amongst other features, its intricate involute shell, redolent of a camera’s refracting aperture.

Employing a theatrical structure – ten scenes in five acts – a captivated, seated audience watched keenly as Mahler and her collaborator on this project, Dean Kavanagh, meticulously assembled, disassembled and assembled again a complex network of devices on two raised platforms. This was done in order to generate, there and then, a series of discrete moving image sequences that were projected onto the screen at the back of the room. To the raw, discordant sound of radio static and industrial groan, a sci-fi narrative predominantly of planetary collision and lunar eclipse also included analogue footage of a voracious roadrunner battering to the ground the lizard clasped in its mouth, an earthly dimension that accentuated an overarching sense of travel through both space and time.

Originally a printmaker, Mahler’s central point of inquiry is to examine what needs to react with light, in order to produce an image, in this case on screen rather than on paper. For ‘True Wholes’, a title inspired by an Arthur Zajonc quote about the role of light in relation to science, society and the rise of culture, Mahler creates a set of interdependencies – scientific in their roots – all of which had to be tightly controlled for the duration of her beautifully crafted performance in order for the outcome to play out for her audience as engineered. Positioning herself more as a factor in all of this, rather than as a performer in any traditional sense, Mahler’s expansive, far-reaching piece is as much about betraying its own mechanics as its results. This revelatory process, while rendered visible, retains a measure of mystery; in its entirety the work is taut in its conception, clear in its undertaking but, nevertheless, enticingly out of reach.