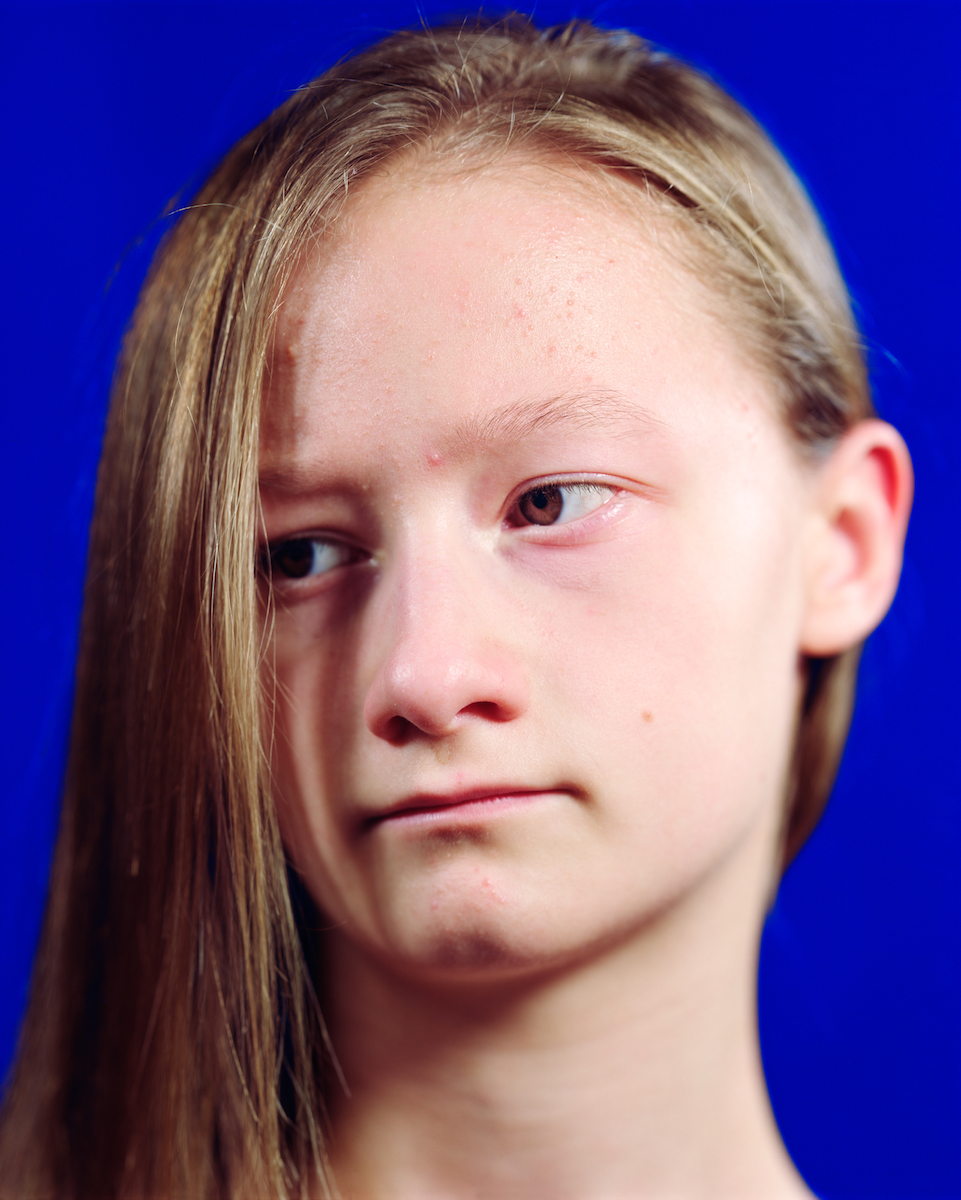 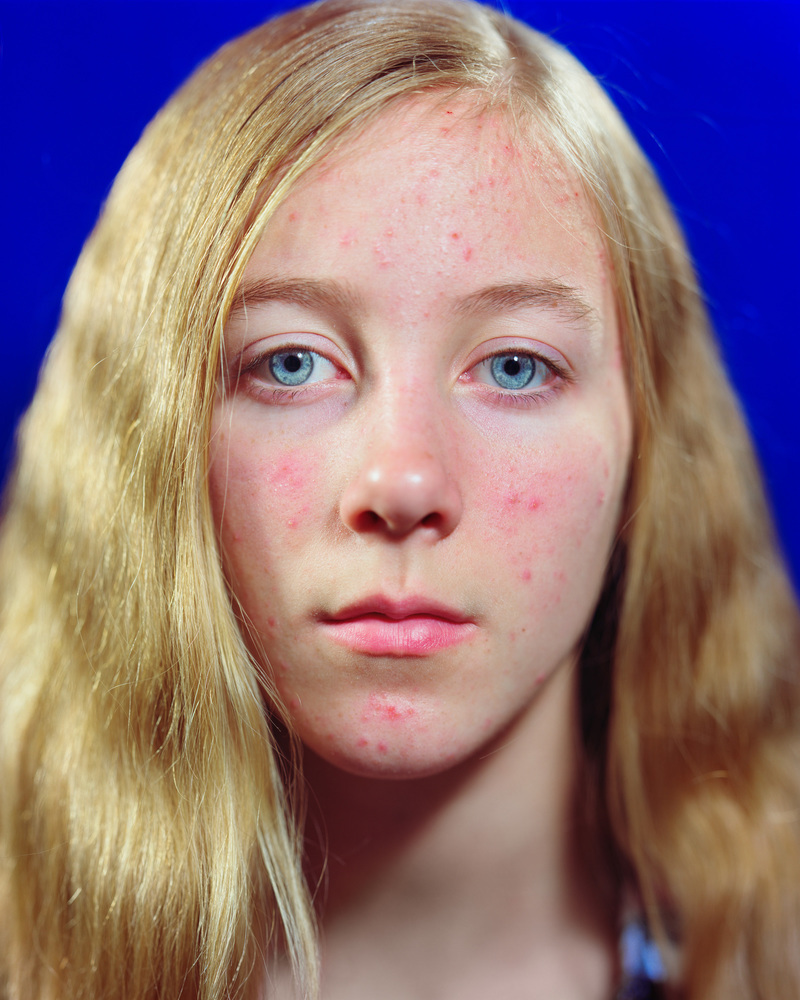 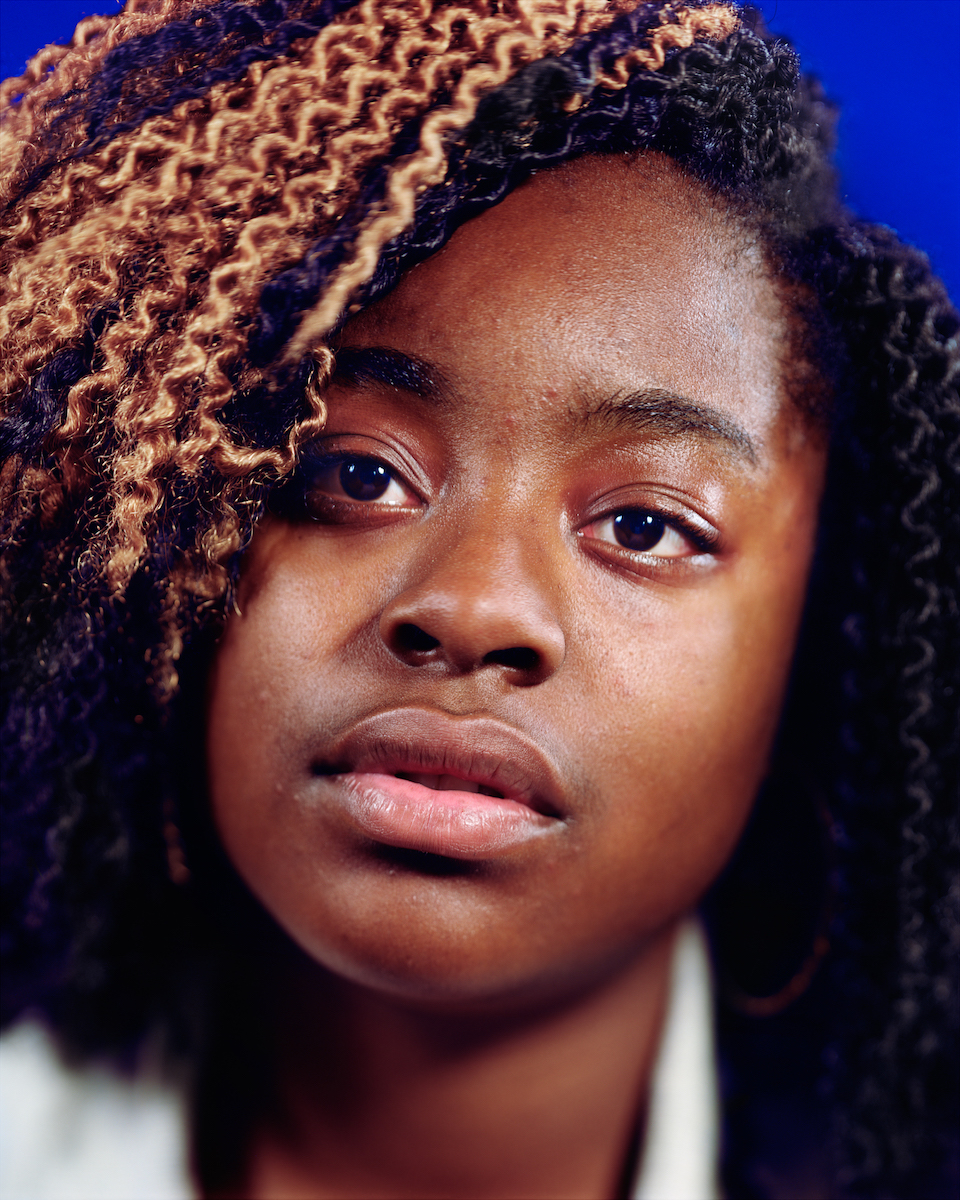 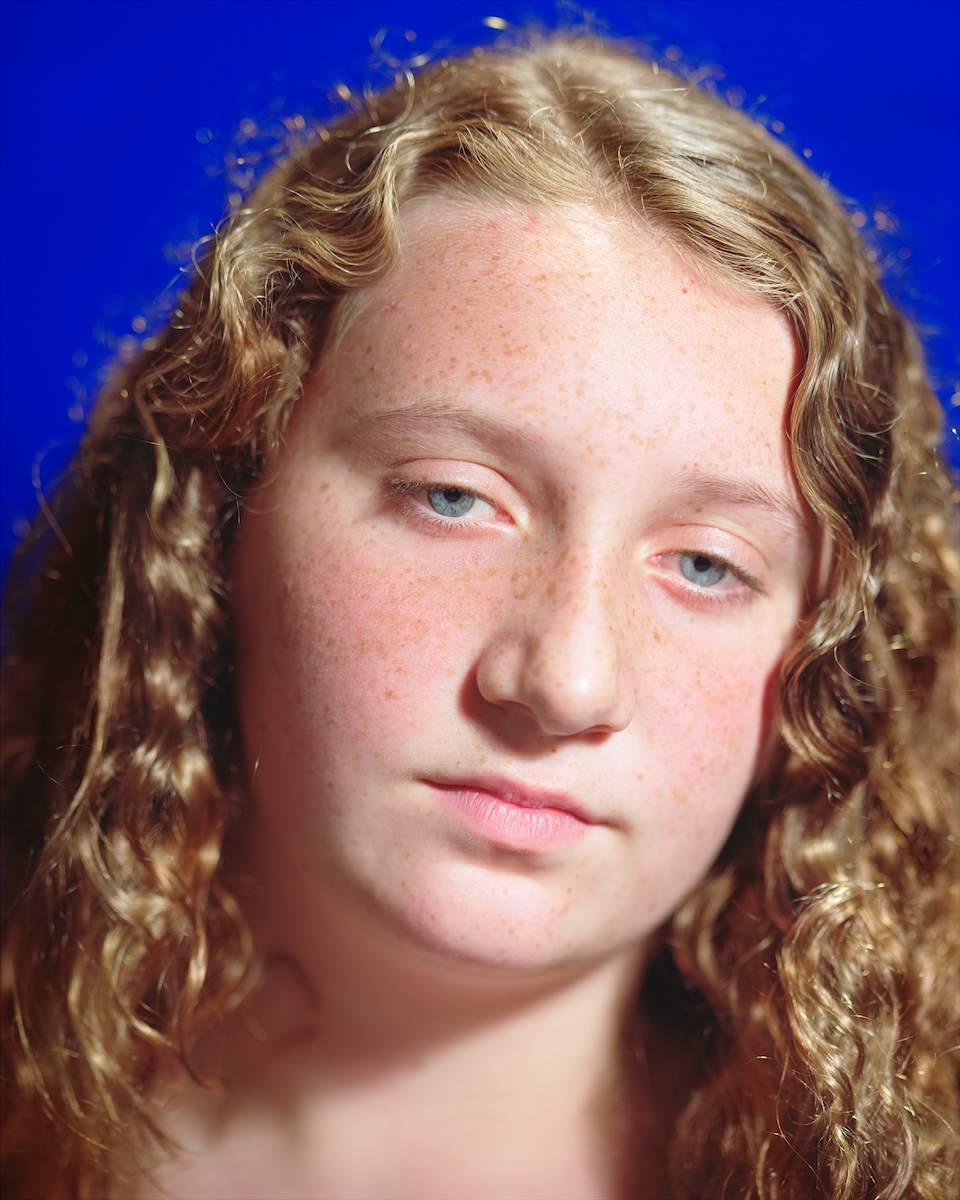 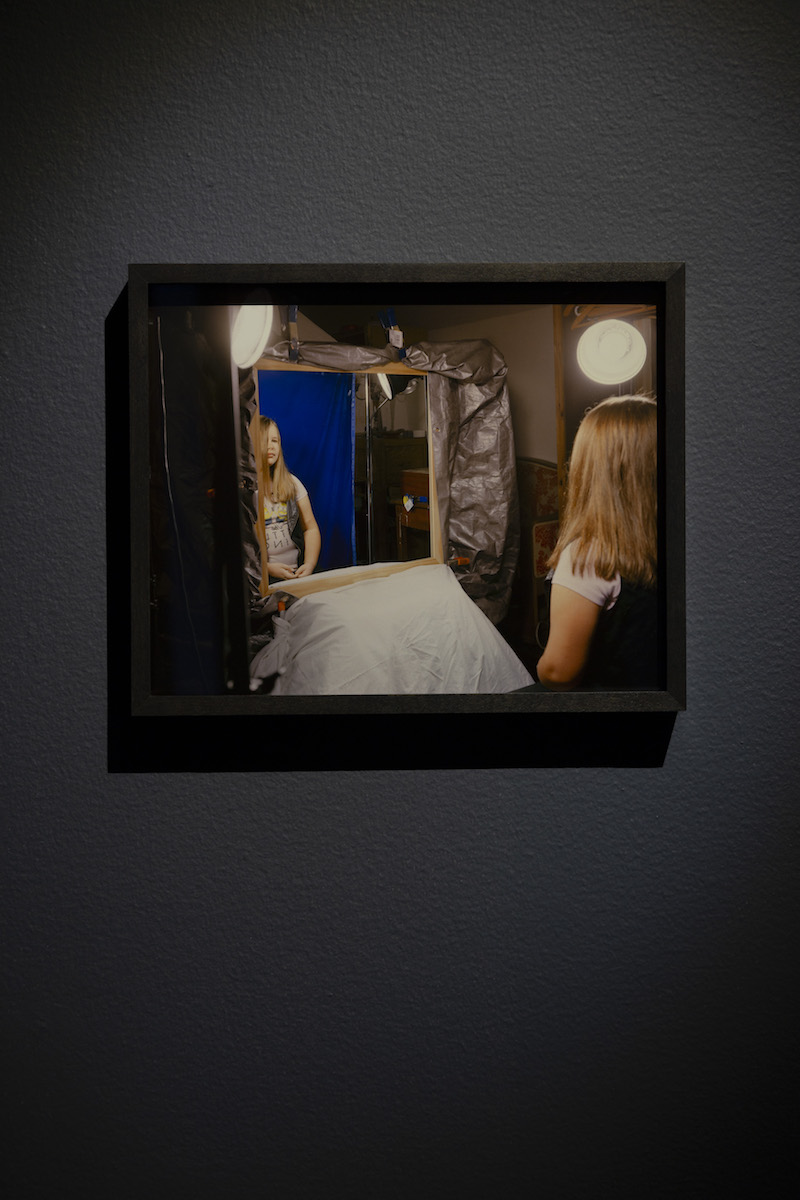 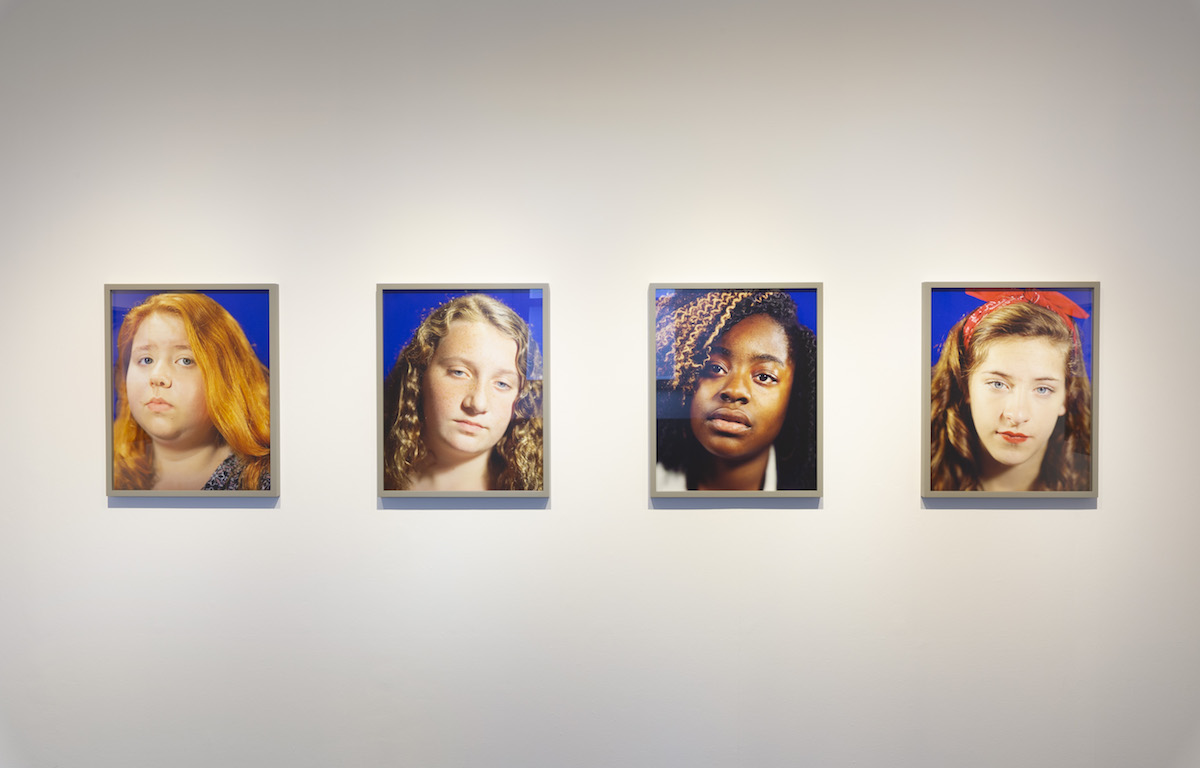 Looking at their pictures, you may be tempted to think that for example Lauren is sulky or that Leah is assertive. In fact, each of the sitters for this series of photographs was aged between eleven and fourteen and responding to a call for ‘female identifying’ girls, with those selected by the photographer presumably receiving their own studio session. Perhaps more than any pose captured, Maddie’s fallen gaze and classic rendition of renaissance curls enlivens an art historical palette in direct contrast to the sitter’s own demi poise.

This measure of knowing and unknowing behaviour is the ground for our introduction as viewers, not that the girls are showing any interest in us, appearing here on too grand a scale to be engaged as equals. Beyond any one detail, each girl’s appearance through the lens is immediately striking for the power it effects. Whatever of the female sitter and photographer re-appropriating a traditionally held male gaze, rooms of teenagers deeply immersed in a self-reflective state of adolescence really does speak of our age. This exhibition of colour photography by Eva O’Leary uniformly addresses the expressions of a lasting gaze, suggesting that in the end we are all looking to be seen.

An accompanying behind-the-scenes photograph shows the sitter propped against a sapphire blue ad-hoc hanging fixed to a dresser with alligator clips. This deep blue backdrop appears in each photo as a key statement about the nature of her work. Despite their proportions, these are not just blown up passport photos, they provide an imaginative rather than institutional framework and together with the clips hint at a photography acknowledging of its own illusion.

Even so, each picture stakes the moment of awareness as being a visual statement, most notably presenting its subject as coming to an awareness, both of themselves and the way they want to be seen. It is interesting to wonder if the space between awareness and exposure can actually be witnessed by an outsider and in a way this is the set up employed to draw out necessary confrontation with a wider aesthetic appreciation. Altogether the images produced show the adult gaze to be as awkward as it is around ideas and facts of puberty, gender definition, or even dreams.

Technical proficiency and staging on the part of the photographer in the end offer us a way to witness the exploitative nature and indeed power of the composed image to circumscribe self criticality, providing access and influence beyond that which even the subject themselves may grasp. The history of portraiture, in painting and photography, and in turn the expectation of the sitter to behave within that manner of identification, only alerts us to those wider conditions defined by society, concerned with proper behaviour and gender assigned roles about the encounter and comprehension of oneself as a subject of a patriarchal convention. Is the composed image the biggest illusion of all?