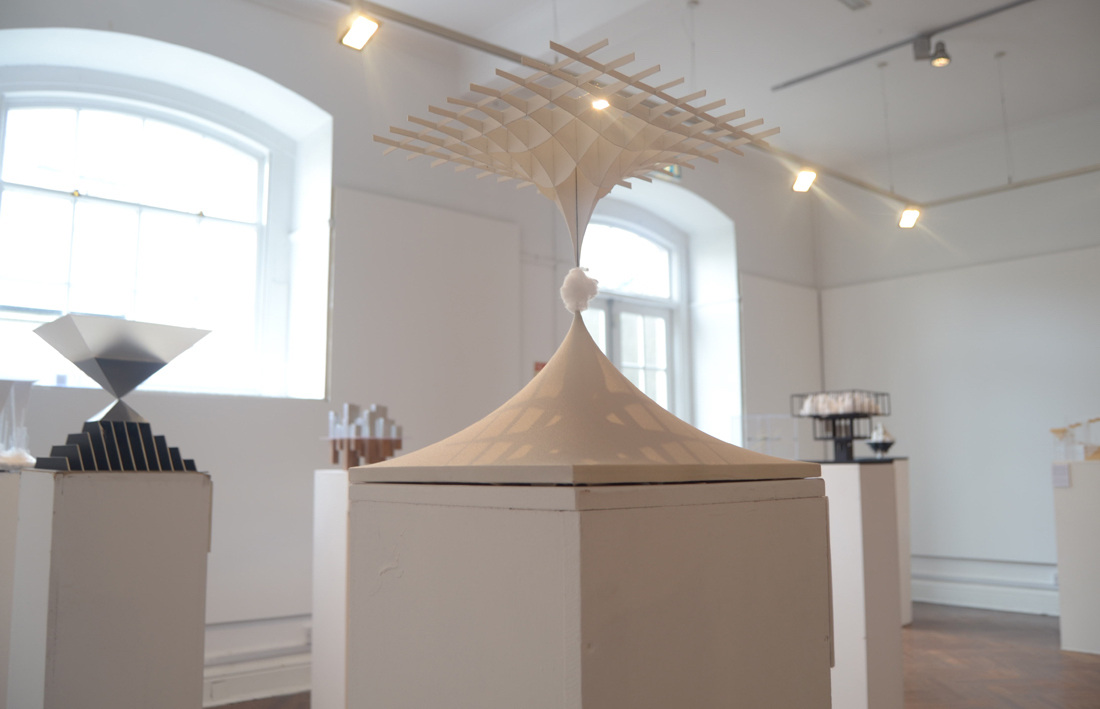 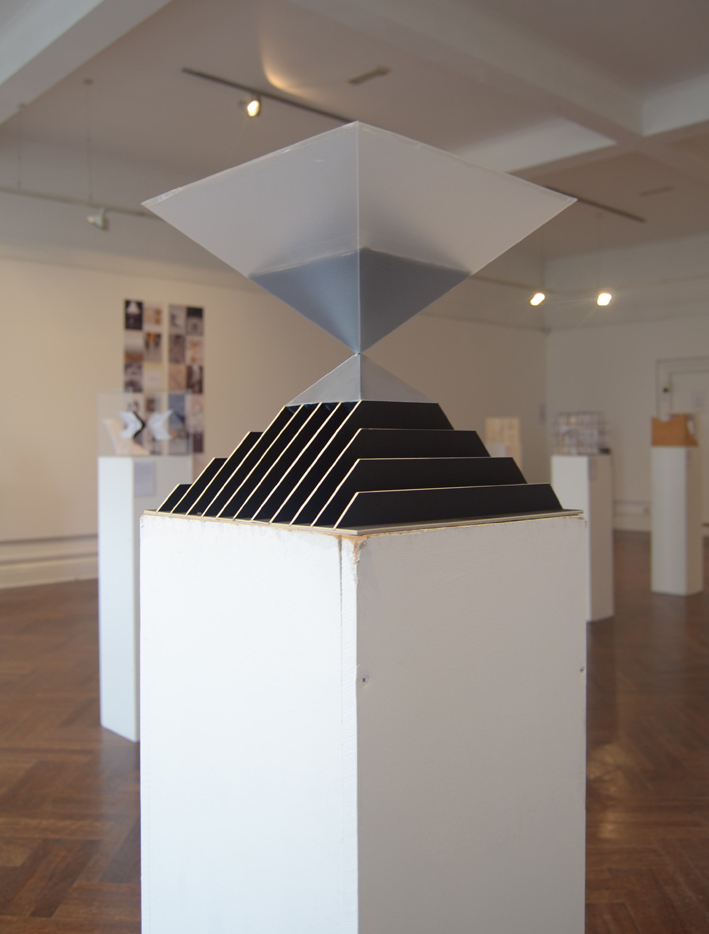 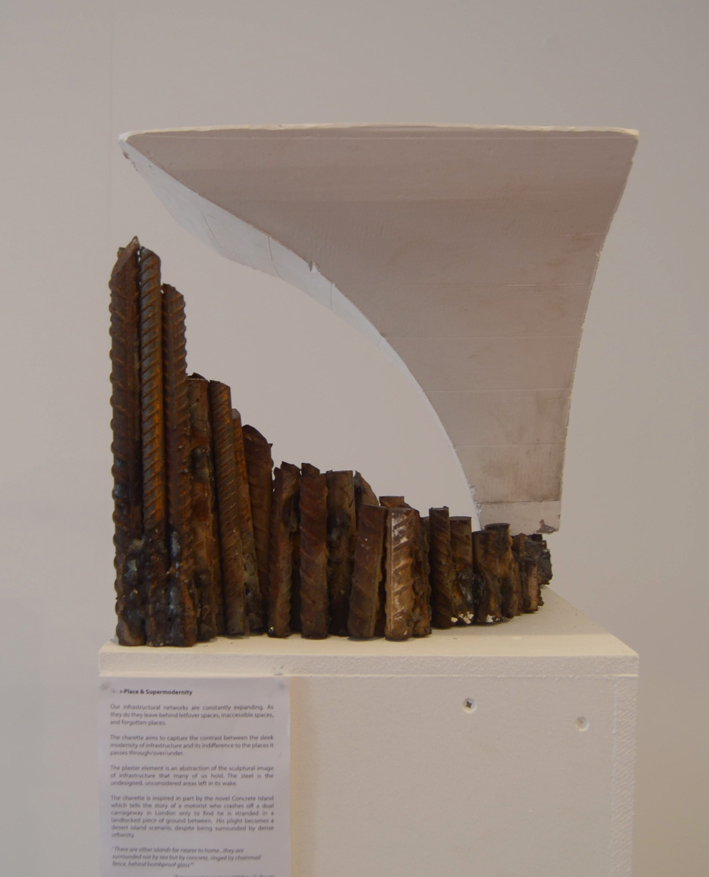 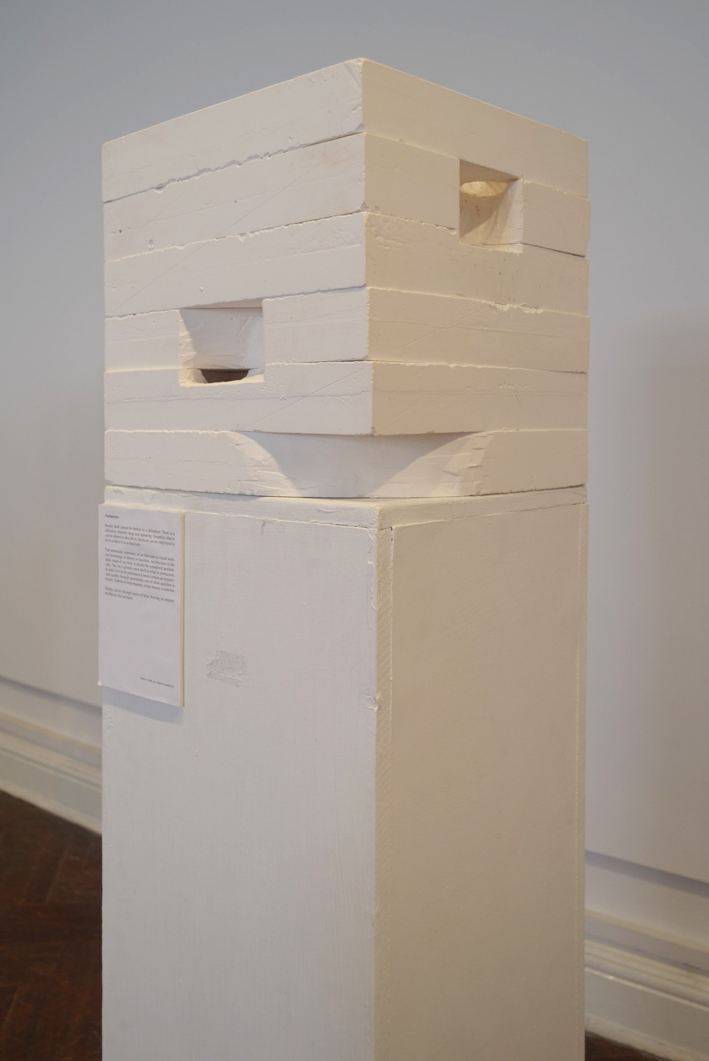 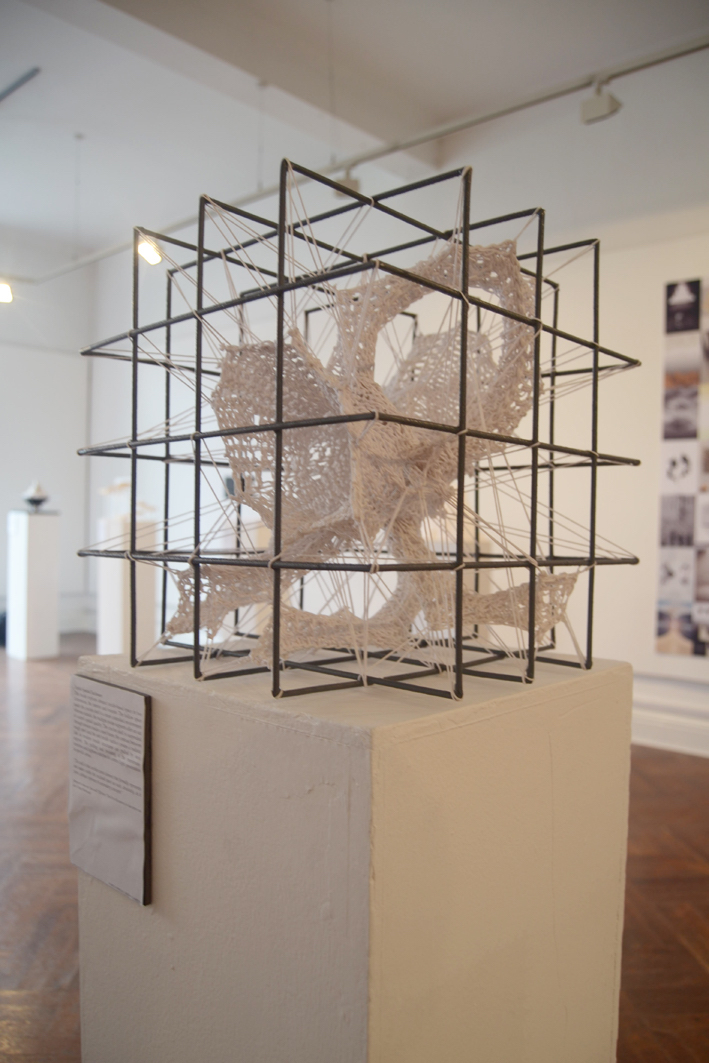 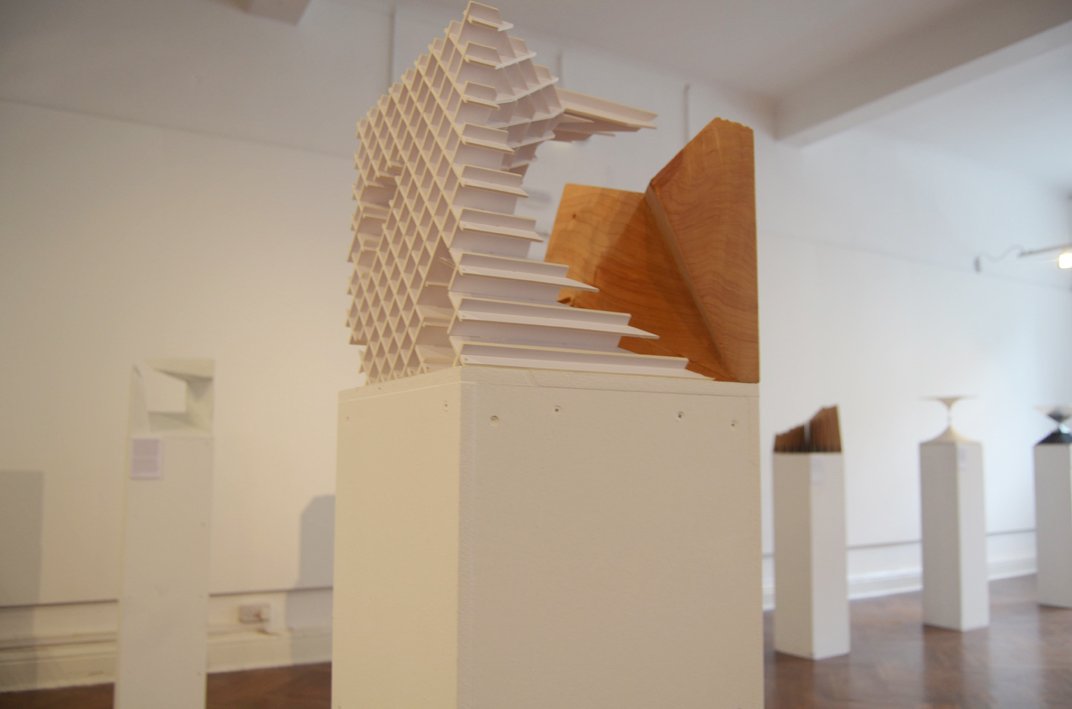 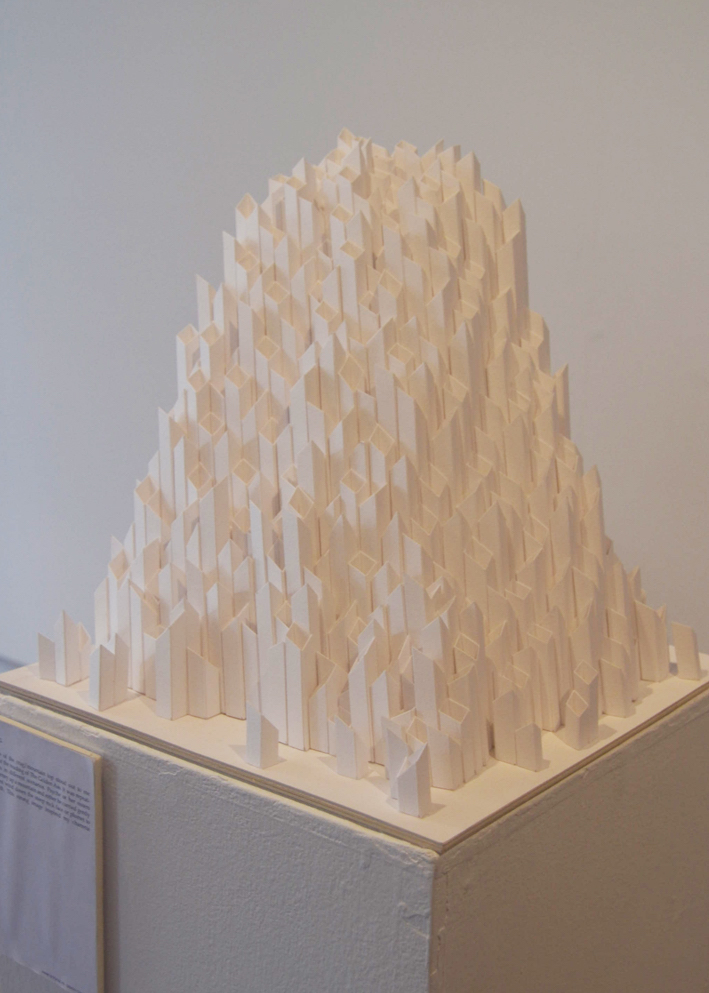 The Crag in Design & Research at Garter Lane Arts Centre, installation view. Photography by the writer.

The plinth, like the picture frame, once served as the barrier between the viewer and the object but, as with the white cube, instead of becoming obsolete with escalating developments in the arts, it gathered an expanded set of meanings and functions. The plinth underpins the first of three exhibitions which have evolved from Project Space, a collaboration between Garter Lane Arts Centre and Waterford Institute of Technology (WIT). Design Through Research, the work of 15 WIT fifth-year architecture students, is an exploration of the process of developing concepts into workable designs. Displayed on 30 plinths, bound by the square dimensions of that platform, their outer limits conforming to a cubical shape, sit 30 ‘charrettes’ [1], the product of the students’ research.

Entering the gallery doorway which is bracketed by the first two of these works, rows of white plinths create a nominal corridor that divide the remaining 28 plinths – arranged in a grid-like pattern – down the middle. To the left of the gallery, 14 works take Lucius Apuleius’ Golden Ass (Metamorphosis) – and more particularly the tale of Cupid and Psyche [2]– as a starting point. To the right the brief is less specific but largely revolves around the idea of contrast, negative space and the ‘other’.

This reversal of the plinth’s original role – from barrier to the mainstay of a porous, inclusive environment – and the containment of such paradoxical ideas, reverberate throughout the installation. There is an echo of bright, classically pillared halls in the layout of the gallery, but it might be the Minotaur’s dark labyrinth that the works themselves conjure. These associations in turn evoke the internal memory palaces of Greek poet Simonides of Ceos [3] which mirror both the classical theme of Cupid and Psyche and its ominous counterpart.

Materials are those common to the architect’s maquette – card, wood, Perspex, metal, cotton wool, with the occasional found material like the rebars in Space and Modernity. Processes include carving and modelling and materials are cast, woven, welded, glued. The Crag, which simply takes its starting point from the repeated reference to mountains in The Golden Ass, uses only lengths of square ‘tubes’ made of mountboard cut to differing lengths at 45-degree angles and set side by side at that angle, producing one of the more gratifyingly organic works in the show. Harmonious Union conveys the attempt to reconcile the digital and analogue through the use of wood and card, carving and construction.

Textile Spatial Enclosure, a crocheted hollow form suspended in a metal grid, explores the notion of interior and exterior spaces and how they define each other, while The Soul reflects on the division between the soul and the Divine.

Despite the occasional distraction of untidy labels, the show conveys a sense of balance, a balance that the visual artist constantly tries – and often fails – to master on the knife-edges of ever moving possibilities. The success of the exhibition lies perhaps in both the layered constraints of the brief and the differing aesthetic compass points from which the artist and architect advance. The artist asks a question, the architect finds a solution. The artist casts herself out and immerses herself in a chaotic world, while the architect remains in control, imposing structure on that chaos. In Design by Research the architect and the artist meet.