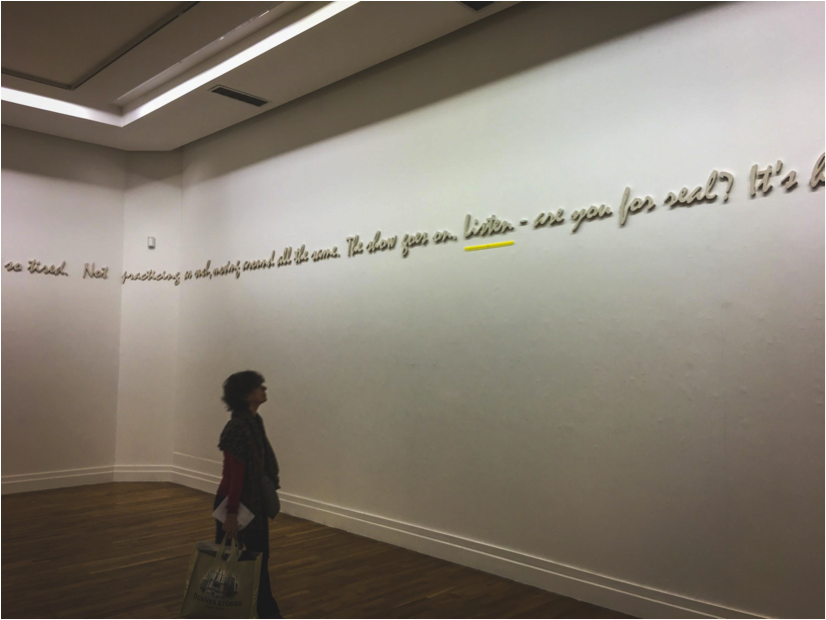 Naomi Sex, All this surface and Silence at the RHA, photo courtesy of the writer. 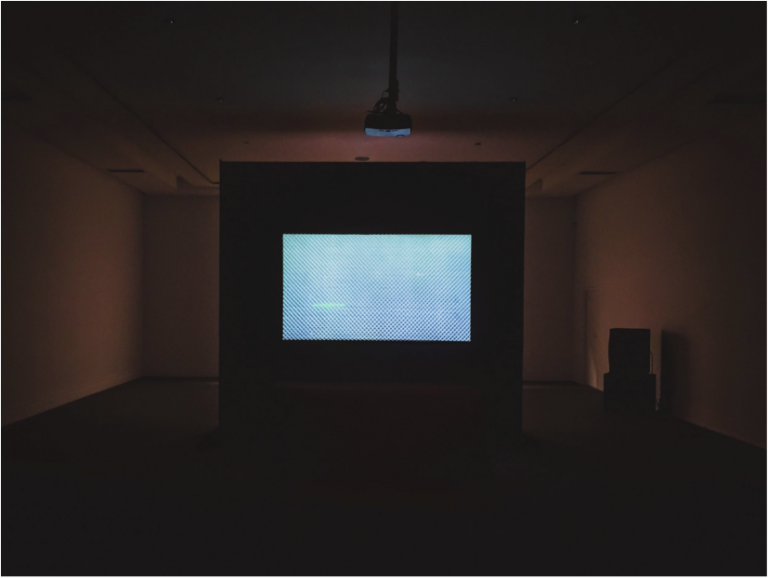 Naomi Sex, All this surface and Silence at the RHA. Photo courtesy of the writer.

Naomi Sex, All this surface and Silence at the RHA

These are the words, underlined in yellow, that hang high on the gallery walls as you enter Naomi Sex’s All this Surface and Silence in the RHA. The words form part of an informal prayer that circumnavigates the room, a prayer which is signed-off with a kiss by Carmel. Here the choices of an artist are compared to that of a religious believer. The decisions made reflecting a vocation rather than a career, and one that is filled with suffering and doubt. Sex’s raising of the text above the door frame evokes the torments of Renaissance artists painting ceilings on their back. An image further enhanced by the use of ‘dado rail’ within the text – the height of a dado rail is derived from the height of a pedestal in the classical order – and the artist’s choice of rabbit-skin glue as a material during its construction.

In a traditional sense the room is bare, left open as a vast space. When viewing an exhibition, particularly in an expanse of this size, individual works provide a point of visual focus. As well as direction, they offer a privacy from others – a personal space within the public space. Visitors can pause for a moment, waiting on the next piece to become vacant before slipping in for solace. Here Sex utilises the entire room for a single piece, combining the space into a single artwork. Each visitor occupies this single piece at the same time, and as such circling the room, head aloft at 45°, to read the text provides a dizzying, and very public, thrill.

The second gallery in All this Surface and Silence affords a contrast. The light and openness of the first space has been replaced with a dark and sectioned room, this intimacy also brings with it a comfort. As you enter, there is a projection of images of painted classical architecture, but it is not until Atlas appears, atop a pedestal and holding aloft the logos of Audi and Volkswagen, that their location in a car dealership becomes clear. Images of these murals are interwoven with shots of the now defunct and derelict dealership. The scenery of villas and gardens in the Italian countryside seems to challenge the work we saw previously. in the showroom it is a piece of visual architecture in a space rather than a work in its own right. A commission for a gallery cements it as an artwork, a commission for a car showroom muddies this assessment.

This space is transformed into a stage five times a week as Car Dealing – Making Art is performed by Darina Gallagher. Gallagher alternates between the persona of the artist working on the aforementioned mural and a car salesman within the dealership, drawing parallels between the two: the proliferation of jargon, the perception of busyness, the veneer of a career. When not a stage, the second gallery is soundtracked by an unknown musician, whose anonymity is deliberately maintained by Sex, she withholds the information but that does not mean it does not exist. The viewer, albeit without ease, can identify the musician through the internet if they are willing to search. Here Sex raises questions about ownership and appreciation. Through digital channels, music and visual art are available 24/7. Art is no longer confined to the institutions that once kindled it, nurtured it, and at times held it aloft from the world. It now exists digitally through the proliferation of applications and websites that host artists’ social media profiles and entire bodies of work for immediate and private consumption. This helps increase an artist reputation but at a cost of decreased ownership, whilst removing the public aspect to viewing artworks. In a gallery the artist controls the variables at play, down to the minutiae. Online these are removed, placing the viewer in a detached environment and dissolving the atmosphere created by the artist. In the 21st century economy of being an artist. the cyclical process of maintaining a persona and presence online is not always sustainable but often necessary. As I leave the gallery I re-read the prayer once again, as it prophetically proclaims ‘the show goes on’.