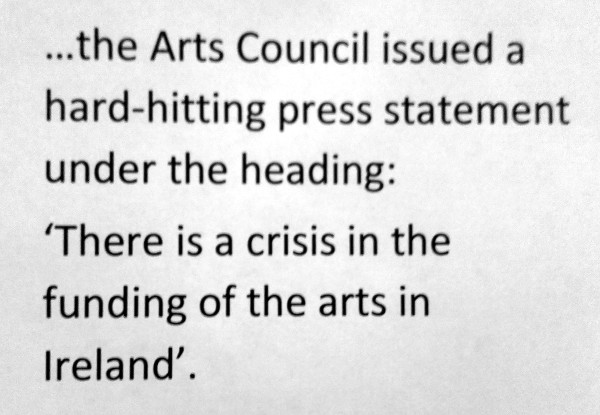 Glancing through the scans of CIRCA from years gone by some items jump out, not just because they seem pertinent to what’s in the ether at present but because the original story and the furore that followed was bizarre enough to be remembered. Notable also is the fact that such incendiary stories did occasionally ‘get out’ and were widely aired and debated even without social media to add to the momentum.

In a CIRCA Note of Issue # 61 (Jan 1992), it was announced that Émer McNamara, the Regions Officer of the Arts Council, had resigned following on from the affair of the ‘shredded’ books. The piece ran as follows:

“Adrian Munnelly, Director of the Arts Council, had shredded or destroyed in some other way 200 copies of Dreams and Responsibilities a history of ‘The State and the Arts in Independent Ireland’ which the Arts Council itself commissioned from Dr Brian Kennedy, Assistant Director of the National Gallery of Ireland. … Munnelly cited ‘good housekeeping’ as the reason for his action suggesting that there was a storage problem in the Council’s Merrion Square HQ.”

“the perception that the book had not been well received by the then advisor to the Taoiseach, Anthony Cronin.”

As CIRCA relates it, the book suggested that

“in 1982 Cronin had telephoned the then Arts Council’s Chairperson James White to convey the taoiseach’s wish that Colm O Briain be asked to resign as Director of the Council.”

Cronin, at the time and subsequently, refuted this version of events. This aside, and as noted by CIRCA, O Briain’s resignation as Director of the Arts Council came at a time when

“The council were at loggerheads with the government over funding.”

In addition to highlighting an instance of a senior officer taking a stance, effectively blowing the whistle on government interference in Arts Council business, the affair also reveals ongoing tensions between government and the Arts Council.

To get a bigger picture of the history of such tensions and oppositions the original source makes for essential reading: throughout Dreams and Responsibilities there are several instances of Arts Council Directors and Chairpersons expressing their dissatisfaction over government’s lip service to the arts and inadequate levels of funding.

“The minister for state with responsibility for Arts and Culture Ted Nealon was barraged with requests for an increase in the Council’s grant in aid. The Arts Council learned … that it was important to have the support of the community. On this occasion the arts community blamed the government and not the Arts Council for the effects of restricted funding on arts organisations.”

In 1984 when the Council’s grant was significantly reduced (by 3.6% relative to what it had received the previous year) the Council decided “to take a public stand on the issue of underfinancing of the arts.” On 14 September, the Arts Council issued a hard-hitting press statement under the heading

“There is a crisis in the funding of the arts in Ireland.”

Subsequently the Council engaged in a public-relations campaign to “obtain media support for the Council’s campaign for significant additional funding.” The true impact of such efforts was probably not really felt until later in the eighties when the new Fianna Fáil government did usher in some significant changes.  It is heartening, however, to read how vigilant and consistent McCullough was in voicing concerns about funding and  the increasing powers of the Taoiseach’s department relative to that of  the Arts Council.

Fast forward  to 2016: It has been apparent to anyone working in or involved with the arts in Ireland that funding for the arts is yet again in crisis, that the sector is critically under-funded, with debilitating effects, and that the current crisis has endured for some time.

There is clearly a different set of circumstances which have led to the current scenario. But it is striking that even in the midst of crisis, the Arts Council no longer publicly articulates its frustrations or dis-satisfactions with levels of funding from government. Perhaps its more recent shift from funding body to development agency means that it has abdicated its responsibility to be an advocate for the sector. It seems that role has now been taken up by other groups and agencies such as the National Campaign for the Arts (NCFA) and Visual Artists Ireland (VAI).

#ArtsDeptNow, the campaign which, in a very short time, has galvanised the community to petition and actively campaign for a “dedicated and adequately resourced department of Arts Culture and Heritage” – gathering over  14,000 signatories – has not, so far, been  acknowledged or commended by the Arts Council for its significant effort.

Who knows what battles take place behind closed doors. But, if the Arts Council is to retain credibility with the greater arts community then it has to be seen, once again, to be vociferously fighting its corner while at the same time openly engaging with and supportive of those at the coalface.