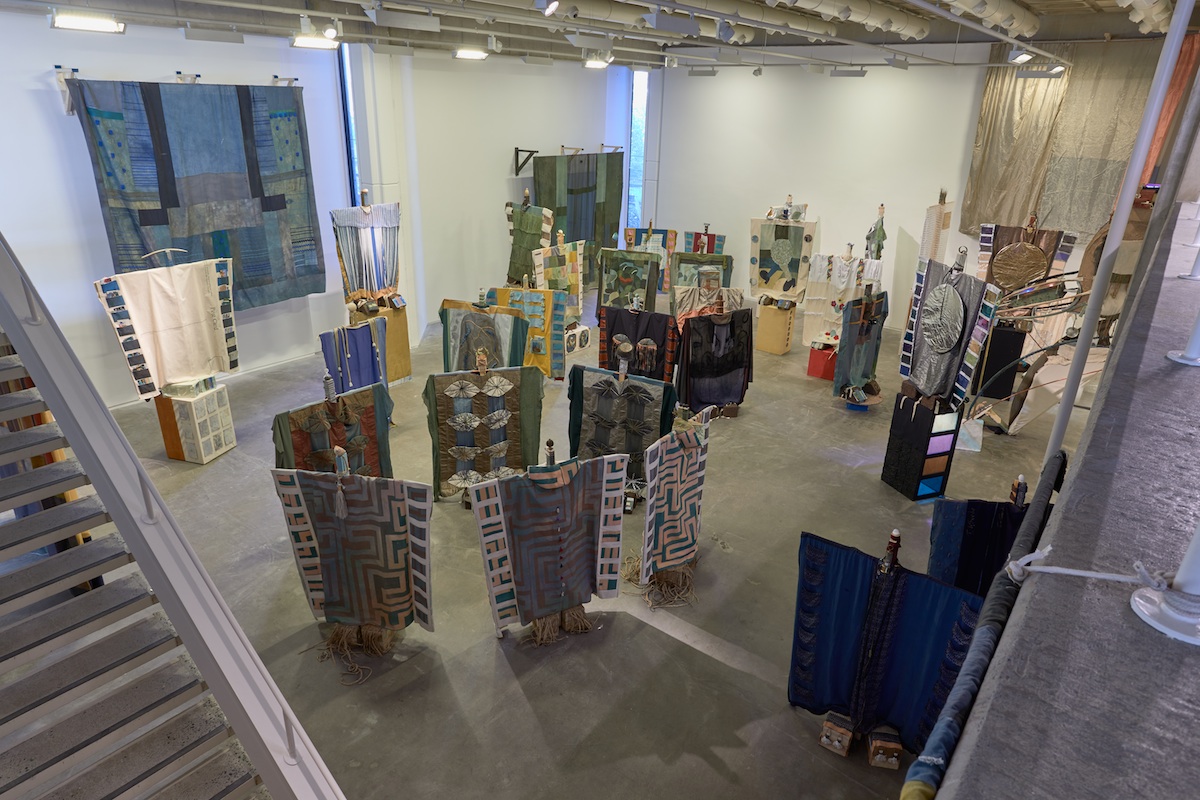 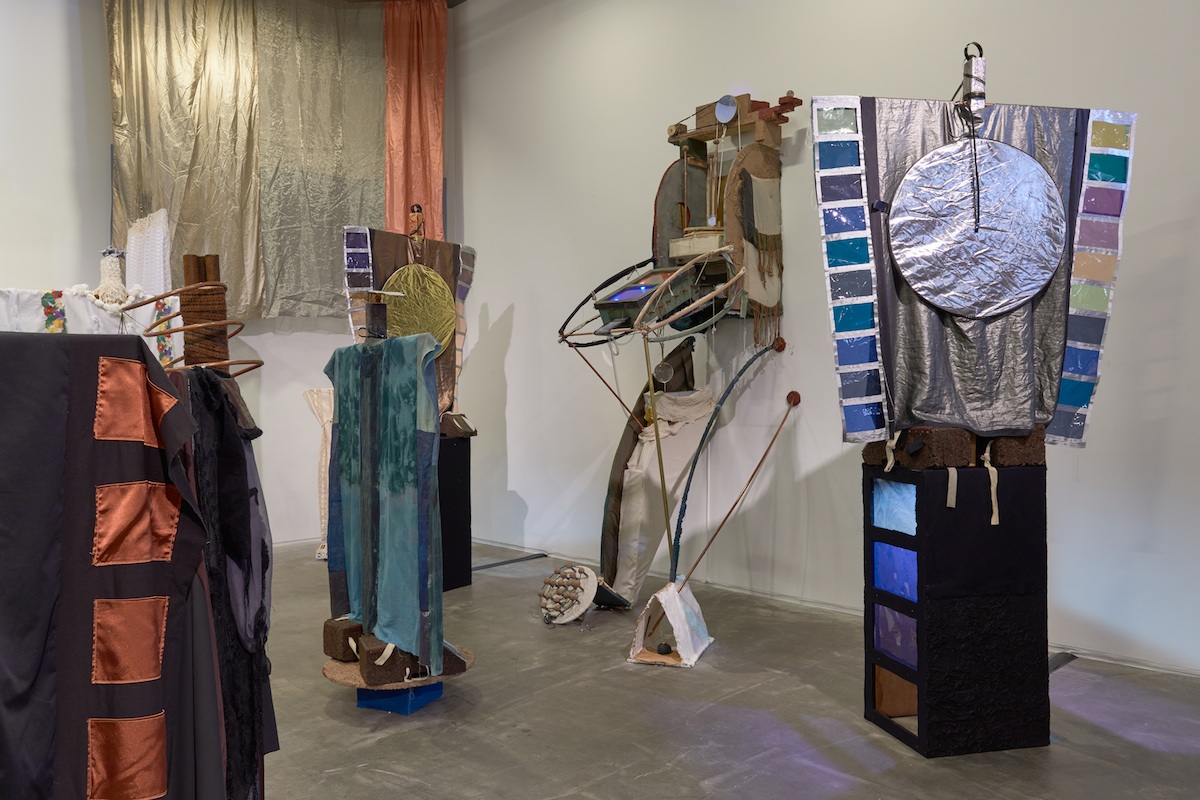 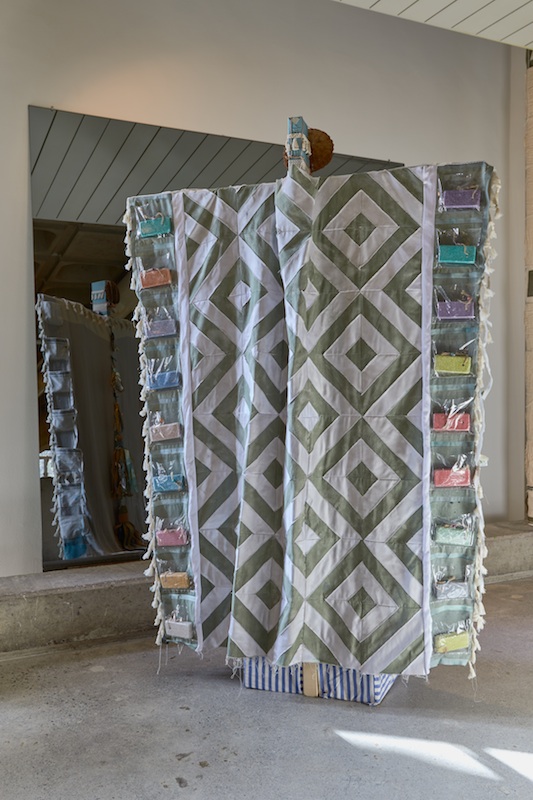 Tamara Henderson’s exhibition, Seasons End: More Than Suitcases, is an immersive and engaging sculptural installation currently on at the Douglas Hyde Gallery. The sheer volume of things – found, gathered, procured, preserved and assembled – creates an overwhelming sensory experience where the space feels crowded, but wilfully so. In the gallery space, a multitude of totems, figure-like and garbed in material, stand alone, side by side and in circles. They are tall and assertive though not intimidating.

On regarding the exhibition from the balcony overlooking the main gallery space, a choreography materialises, with groups forming and figures gradually becoming distinct from one another. After a while, the initial feeling of sensory overload recedes, allowing the emergence of minutiae. Inside folds of fabric, pockets and niches, there are small mementos and souvenirs.

There is that feeling of taking boxes out of storage after moving house. The time it takes to unpack them is multiplied exponentially depending on the personal level of sentimentality or nostalgia at that moment. In this interim, forgotten objects are reconsidered with renewed attention and maybe enthusiasm. “Why did I hoard these maps or that issue of The Scotswoman?”[1], Henderson might have thought to herself before leafing through brittle pages and becoming engrossed.

Henderson wholeheartedly indulges in, and celebrates, the potential for objects to act as a vessel for memory and many of the individual items appear to be of personal significance. She weaves items of sentimental value into the costumes, creating an amalgam of personal and shared experience. In the process of unpacking and assembling, she considers the relationship we have with objects.

In Postcards from the Deep (2016), a totemic figure dons a cloak with insects rendered in paint across the back. Nearby, in a hand sewn pocket, is the source material for this painting, a postcard featuring the same insects. In this way we are privy to a number of phases in the development of Henderson’s practice. In this piece, the postcard is celebrated in its re-presentation. Possibly having been filed away by the artist and stashed with the intuition that its idiosyncrasies would find parallels and perhaps a context sometime in the future.

This seems to be what unifies the many disparate shapes, textures, smells, noises and reams of linen, cotton, painted jersey, iridescent lamé, lace and crepe. Each individual item has been imbued with a sense of rediscovery, a memory that lives within the object, of which only the artist knows. In Samma Arahung (2017), a paint smeared, tattered t-shirt, suggests a longing for a period that was perhaps defined by this garment. Maybe the artist was particularly prolific when she wore these overalls, perhaps a routine developed within Henderson’s practice in which the t-shirt was the fulcrum. It seems significant and inherently becomes elevated by its inclusion on the garb of the costumed figure.

Henderson uses personal effects as anchors which bend time and break the dichotomy between past and present. The artist has spoken of a transient life, moving with her things from place to place and travelling for years to take part in numerous residencies and projects. We might gain clarity in the understanding that, due to Henderson’s transient studio practice, the packing and unpacking of items is invested with elevated pressure on objects to become relevant somehow or risk being thrown away. As such, they are imbued with a melancholic sense of the passing of time.

Yet while the totemic figures are numerous and cluttered, defying a full description in their seemingly endless detail, it is the individual smells emanating from the work that trigger the most intense memory recall. Inside the textile pouches and pockets of Editor in a Suitcase (2017), the smell of oil paint wafts from some spent art materials. My father is an artist and the smell of materials, oils and the woody scent of pared pencils combine to create an olfactory illusion of a studio he had a couple of decades ago when he worked with oil paints. Similarly, Scratched Lab (2018), a darkroom replete with functioning pinhole camera, emanates a pungent aroma of chemicals – developer, fixer and the distinctive smell of a stop bath, acrid and metallic. This too causes an involuntary autobiographical memory of art college in my early 20s.

In Marcel Proust’s Swann’s Way, the protagonist fondly recalls memories of his childhood through voluntary and methodical memory, but the most profound one pops out of the depths of his subconscious when he lowers a piece of almond sponge, the famous madeleine, into a cup of tea. The texture, smell and taste combine like an elixir causing the release of a moment that would otherwise have been lost, perhaps only to recur fleetingly in a hazily recalled dream.

In a similar vein, Henderson has found a means to access points in her past and in the history of her practice that allow her to explore an ecstatic quotidien – a life and a practice that are naturally reciprocal and inherently explorative. Her life as an artist and her travels are inseparable, and the accumulation of miscellanies form the basis for each piece. In this way Henderson’s self-sustaining practice evolves as an inward journey, part visual memoir and part cultural commentary.