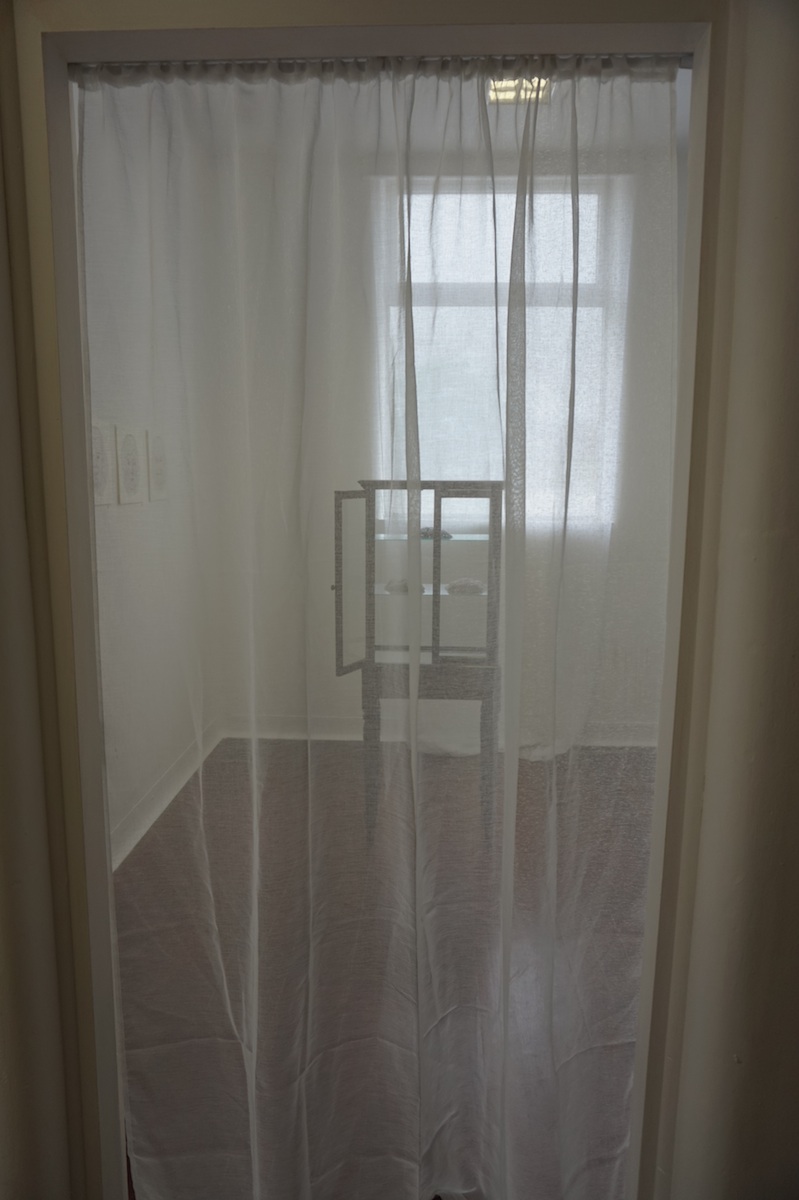 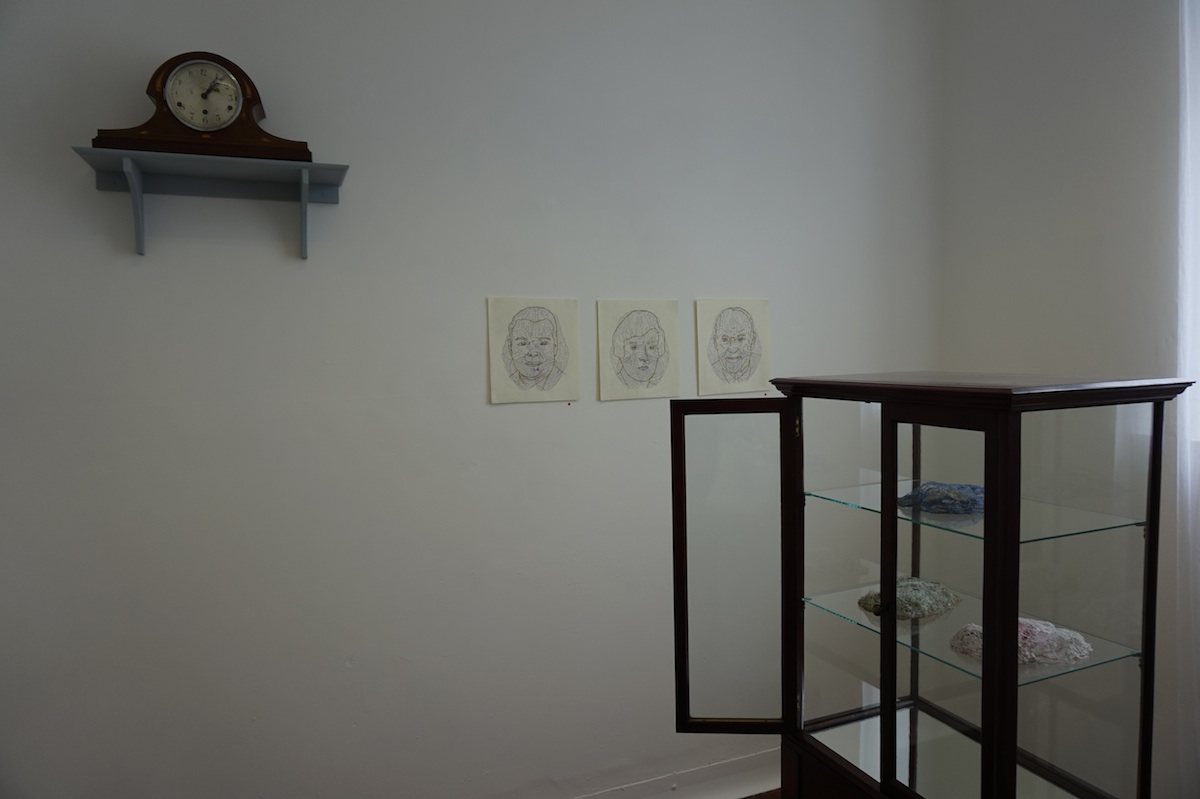 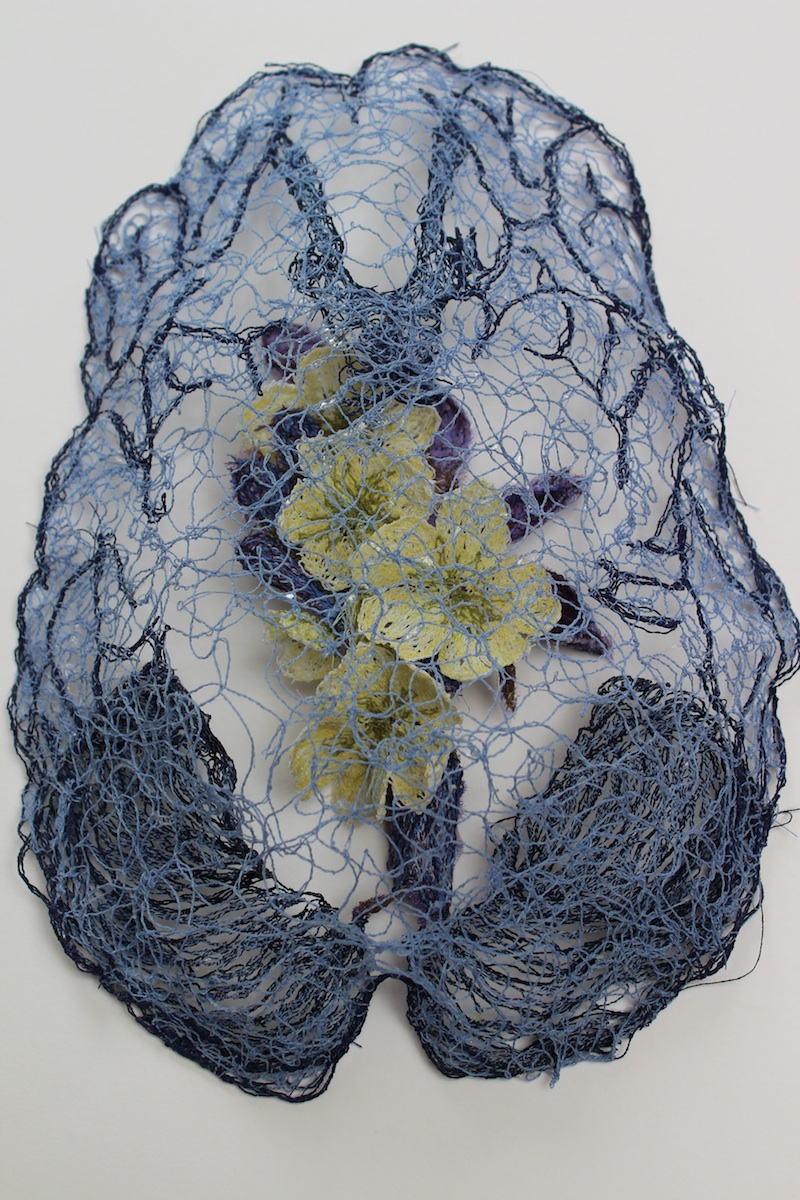 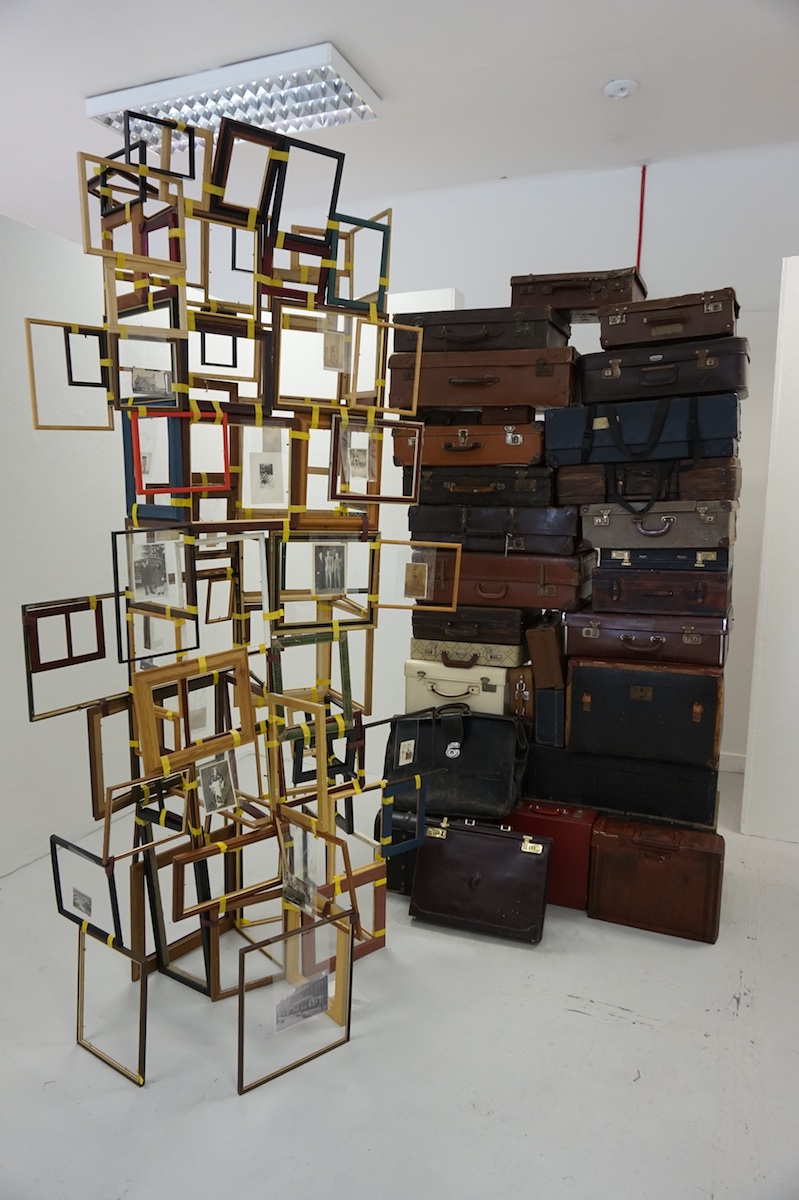 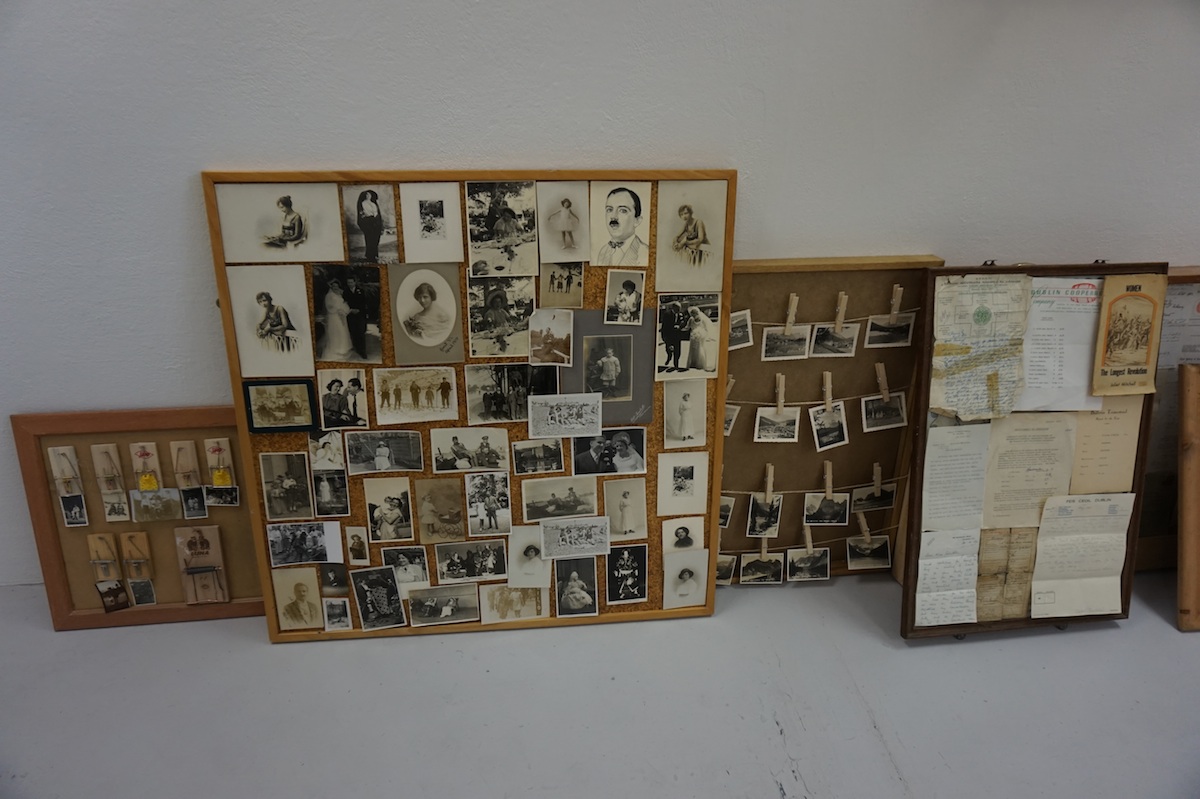 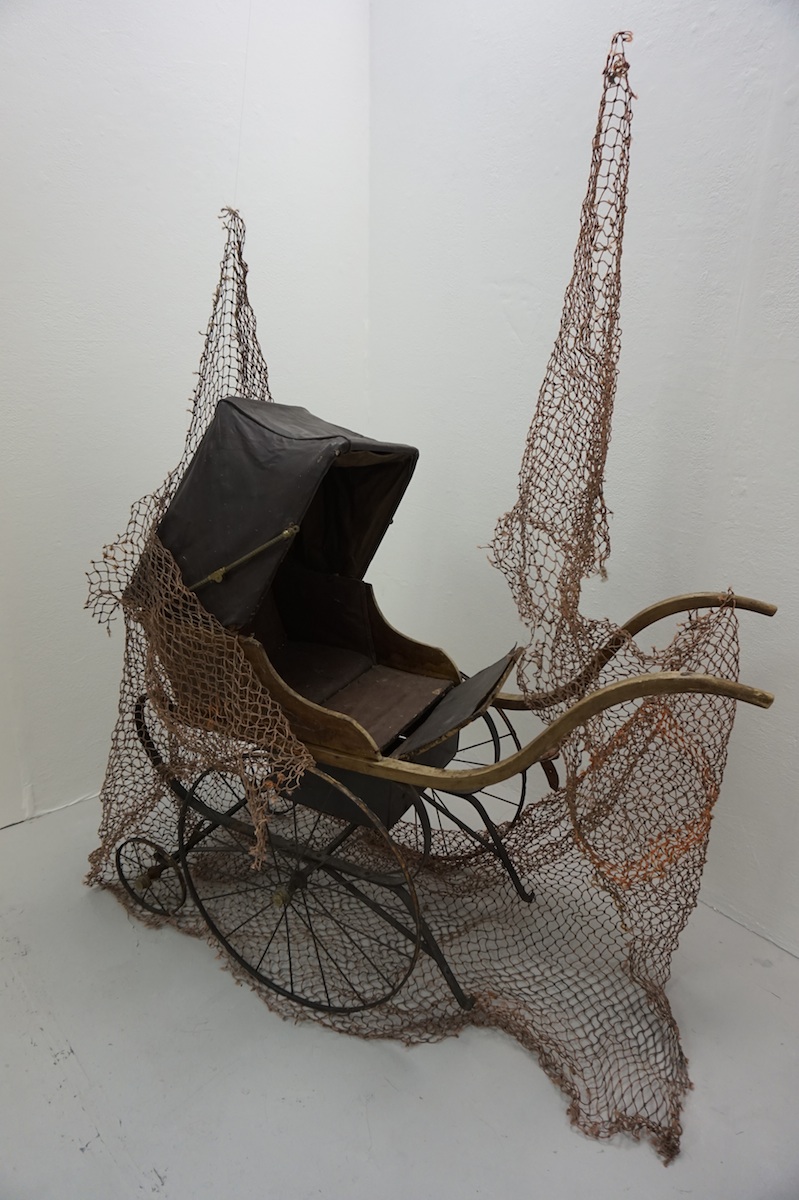 Out of the Blocks – Fine Art Graduate Show 2017

To draw back the white curtain, step across the threshold and into Rosemary Hurrell’s installation is to experience a shift in awareness and altered perception. The viewer has left the corridor to inhabit this space. It is a quietly insistent room; subtly immersive. The senses are engaged – sight, touch, hearing, smell and taste. Hurrell told me that her starting point was “family history and olfactory memory … As the work developed it became apparent that not only smell, but sound and objects are also powerful instigators of suppressed memory.” The scents within the installation are that of rose and lavender furniture polish, evocative of gardens, pristine convents and domestic spaces, recalling spring, summer and fragments of childhood.

There is a strong narrative within this space. The installation comprises of a centrally-placed vitrine with handmade embroidered objects on glass shelves. There are three portraits on the wall to the left (three generations on the artist’s paternal side), another wall work and a suspended rib cage. One is also aware of the ticking of a clock within the space which has been placed on a high shelf, to be heard but not seen. Hurrell employs an intriguing fabrication method; “The process for my embroideries begins with an image, the brain being the most prominent … I then trace the image onto soluble film and place it in an embroidery hoop … I draw the image with thread … when the image is complete the film is dissolved with water, leaving the stitching which is then moulded into shape, and pinned in place to dry.” There is an atmosphere of growth and memory; an emergent self and sense of becoming.

Margie Dunne has also produced an installation with an autobiographical focus. It is defined by absence; Photo frames without photos, empty suitcases and a lonely pram. The memory of the artist’s ancestors is conjured through letters, photographs and other materials but the space strikes the viewer as one acutely devoid of human presence. As one arrives into the space there is an obstacle to negotiate. The artist speaks of the suitcases as an indication of the obstacles in the lives of marginalised people on the move. She has replaced “some of the missing photos with photos in little bags, hanging from the frames, highlighting the fragility of life.”

The artist succeeds in portraying the universal through the personal. It is a heartfelt representation and Dunne takes on the role of cataloguer and archivist providing quiet moments of commentary and opposition to injustice. There are thematic layers to the installation. We are shown “personal photos, shopping receipts, title deeds, cheques, old money, personal letters.” As she mentions “The importance of religion and its effect on people’s lives [is] indicated by the closed display case of Mass Cards, crucifixes, rosary beads and holy water containers from Knock and Fatima; which once belonged to my Mother.”

Hurrell and Dunne both share personal histories to communicate a message that reflects on universal collective identity. Although their installations are very different in configuration, thematically they are similar; there is an evident consciousness of transience and the swift passage of time, fallible memory and the fragility of life.