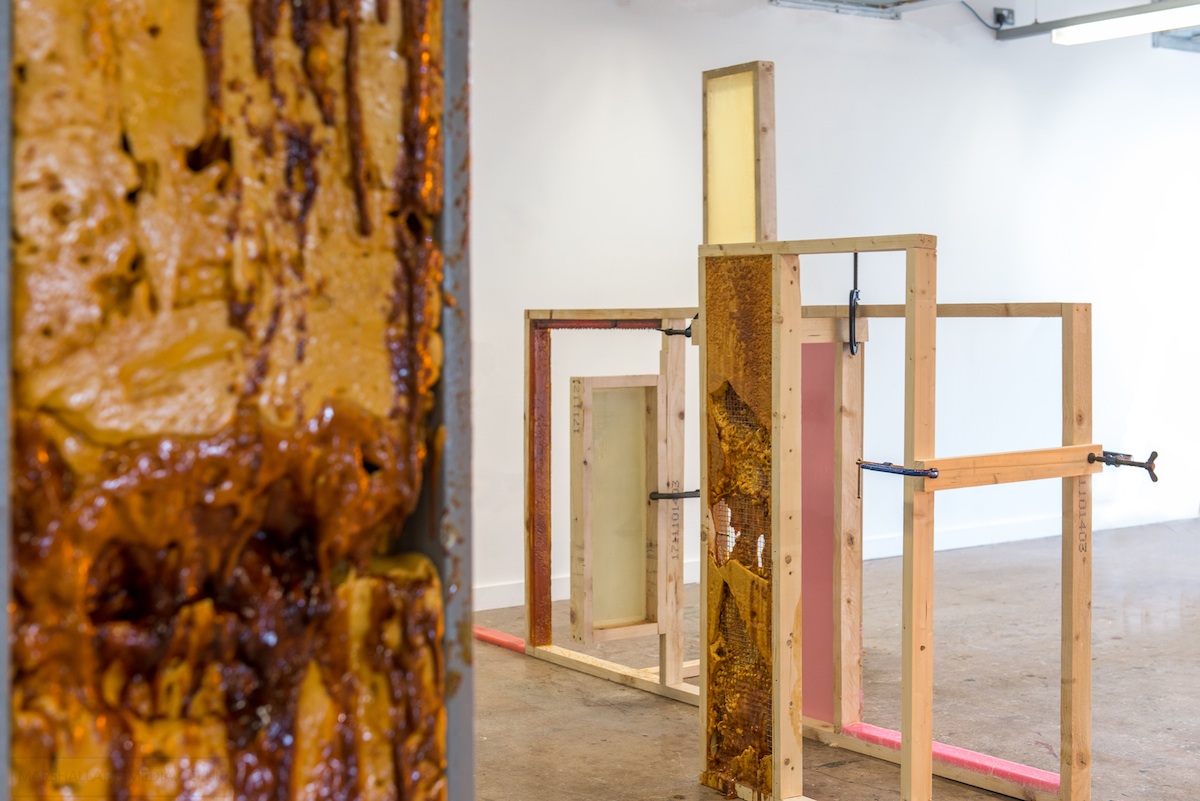 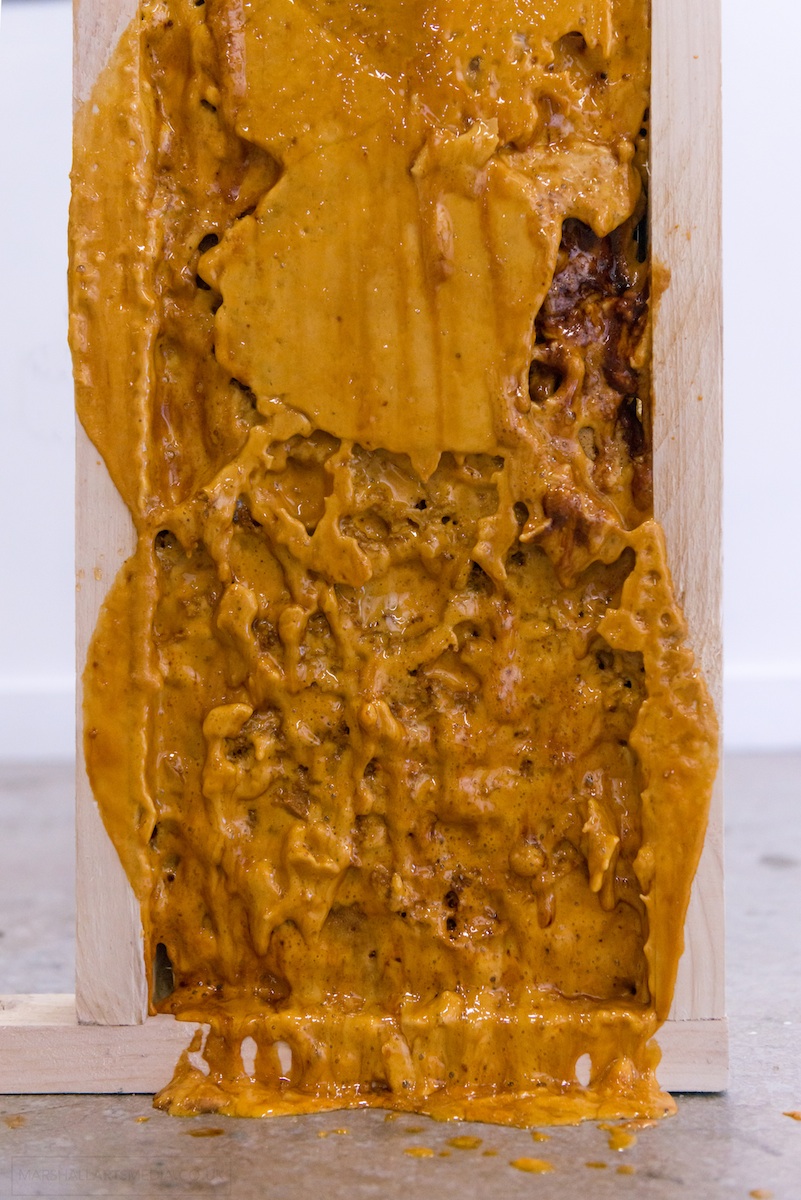 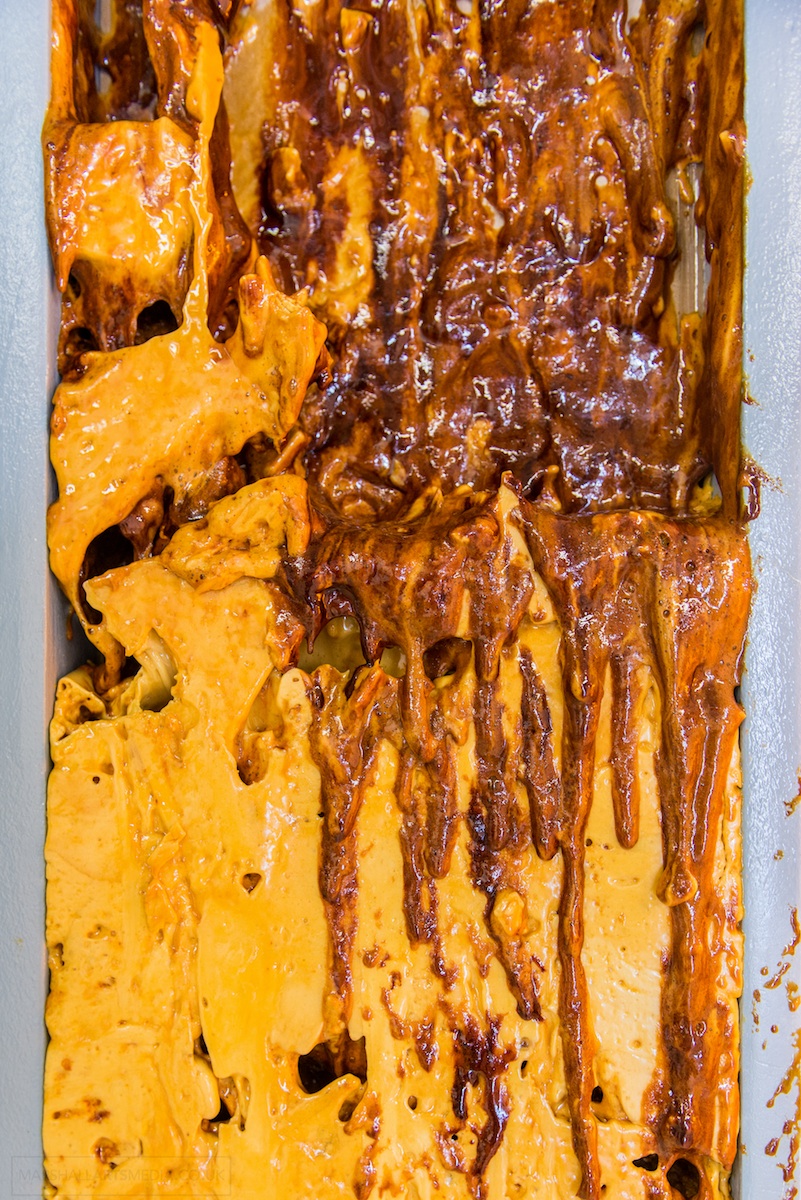 The saccharine smell of Rosanna Wilson’s sculptures mingles with other unidentifiable scents in the corridors that lead to the MFA studios in the Ulster University Belfast York Street campus. To the left as you enter the studios is a simply hewn modular pine framework held together by metal clamps that support thin vertical panels and narrow horizontal slabs of what appear to be glistening and matte solidified sugar syrup in various sizes and colours: soft lemon yellow and hot pink, opaque coral and translucent orange. Wood-framed metal mesh panels provide a grip for lumpy sugar honeycomb panes in various toffee shades. Like hardened lava, the honeycomb seems suspended in mid-molten state, oozing through the grid and spilling out of its wooden boundaries. Beads of sticky sugar ‘sweat’ have gathered on the concrete floor and on the bare wood.

Despite aesthetically referencing Minimalist sculpture, this is not a strict, polished, rigid structure but a raw holding space for materials whose shapes imperceptibly shift. In the background, a large window provides a rare elevated view of the foundations of the new university campus where ant-like workmen scuttle across a miniature construction site. Turning the corner, the cavity of a large steel girder which – like so many of the pipes, beams and other features of this building has been deliberately left exposed – is filled with more honeycomb. Resembling a parasitic, insectile structure that has grown and swollen inside its host, the familiar substance is now alien and grotesque.

Wilson deftly connects materials to the spaces that they occupy, subtly utilising their potential and restrictions. Her objects quietly resonate with the promise of transformation and temporality: from raw matter to sculpture; familiar to strange; one state to another. Instead of ignoring the visual interruptions of the studio, her sculptural installations acknowledge and accentuate their surroundings. I cannot help but feel that they also connect to the growing structures and activity visible from that window, to a city in permanent flux whilst it attempts to regenerate itself.