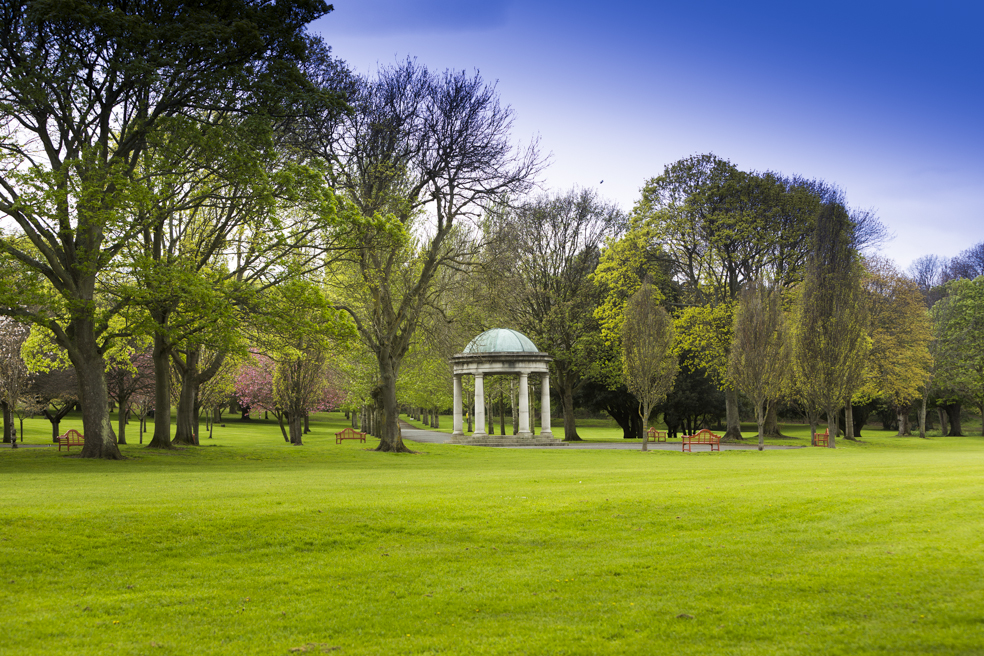 Site for Christina Kubisch\'s sound installation in the National War Memorial Gardens, Dublin. Courtesy of the Goethe-Institute and Eugene Langan.

30 June 1916. The eve of the Battle of the Somme. 100 years later, a listening engagement. At the Irish War Memorial Gardens, the date marks the beginning of a long dedication to those who died. Overlooking the River Liffey, Christina Kubisch’s sound work emits from four speakers attached to a telegraph pole. Voices of Memory recalls over 40,000 soldiers’ names that rest in the Books of the Dead. A portrait of a nation. It is art to contemplate, as well as a memorial to the Irish lives lost in WWI. These gardens, designed by Sir Edwin Lutyens, were once overgrown and abandoned, a forgotten memorial. Now, an arcadian scene of leisurely tranquility. Passers amble by. Boat clubs line the opposite bank, and a paddling of ducks glide along the river’s edge. Repetition, repetition, then change. A man’s voice reads a list of names until they collide on top of each other in a dense, abstract layer. A pause, before the sounds of life on the river bed are brought to the surface through underwater field recordings. The wind erodes parts of the composition and carries them elsewhere. The remembering resumes. A blur of names. It is now a female voice. I am struck by the cadence and tonality of each acousmatic sound, their circadian rhythms oblivious to time and space, imbued with a humanity far removed from the rates of fire of the front-line trenches. Snatches of external conversations drift in. I leave one sound field for another. November marks the close of an already ephemeral memorial.