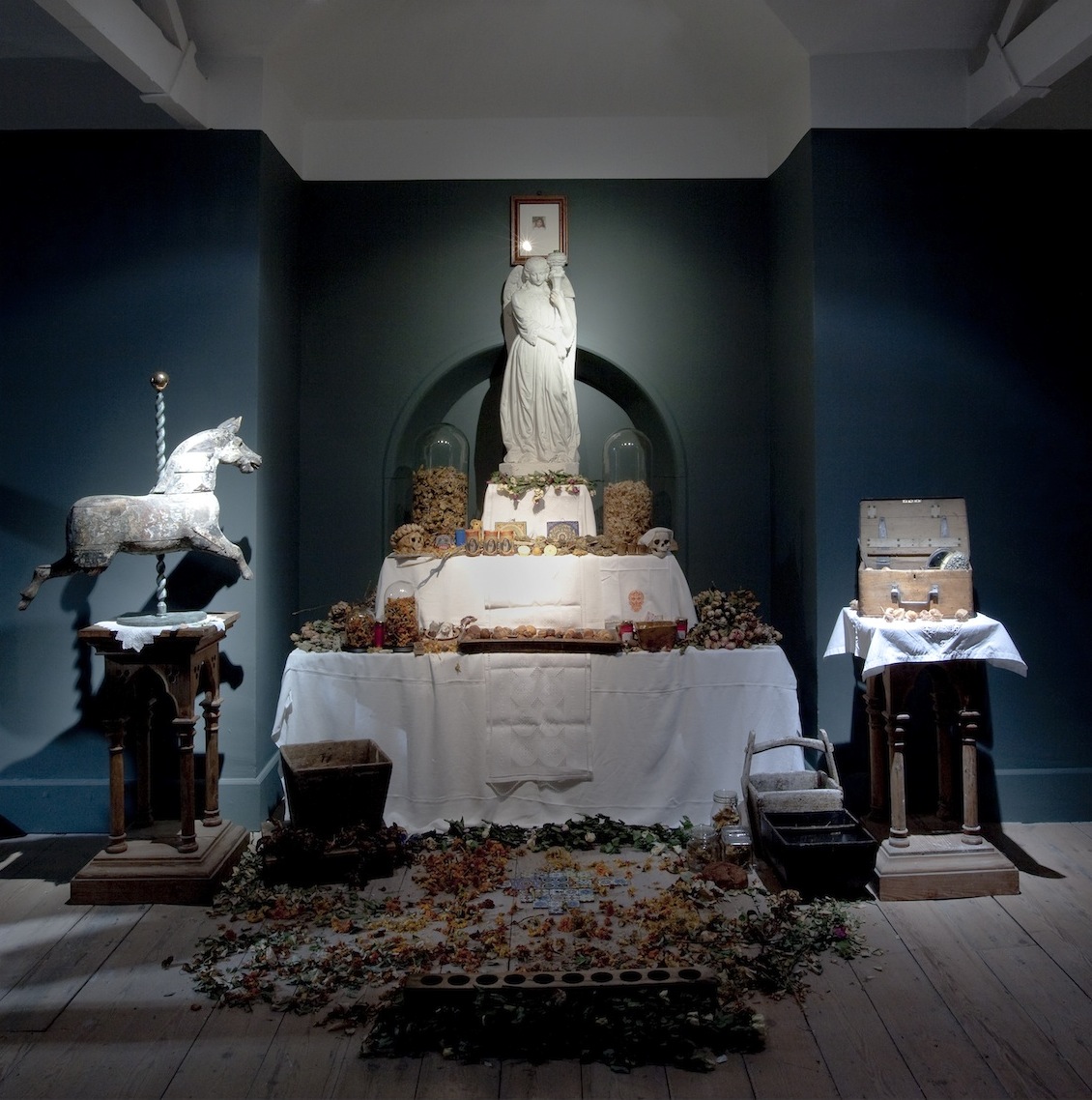 Installation view of ‘Reconstructing Memory’ at The Model, image courtesy of the artist.

Venturing into ‘Reconstructing Memory’, a multi-media exhibition featuring large-scale paintings, photography, installations, artifacts and sculptures at The Model, Sligo, is a truly subversive experience. The exhibition is the creation of Cléa van der Grijn, an Irish artist who wishes to challenge our perceptions of death, grief, ritual and memory. This six-part show was designed to engage all the senses – the heady scent of marigolds perfumes the air, an audio track of exotic jungle sounds plays on a loop and van der Grijn contrasts visuals of intense colour with the atmospheric darkness of the space.

The first part of the exhibition introduces a fictional character, a girl garbed in a Victorian dress. We see her in a short film, as she idles down a road overgrown with wild tropical vegetation till she reaches a graveyard. Here she picks marigolds, presumably from her own grave. In a second film, dusk becomes dawn over a graveyard illuminated by an assembly of candles. A small army of pediatric replicate porcelain skulls are assembled before the screen. One room houses a series of documentary photographs depicting Mexican families performing traditionally domestic tasks in the haunting but beautiful surroundings of a graveyard.

The conceptual centre of the exhibition is the room where an altar is covered by artifacts: including marigolds, decaying fruit, glass replicas of the artist’s own eyeballs, combs, and two metal hearts. An elevated rocking horse next to the altar lends an eerie note. These personal objects embody the core idea of ‘Reconstructing Memory’: that our perception of the dead is reliant on memory, which naturally warps over time so our remembrance of the dead is rooted in a distorted understanding.

Some may think than focusing on death, dying and rituals of memorialization would make for a rather sombre exhibition, but the last compartment of the show challenges that thought. The exhibition ends with a striking parade of large, abstract oil paintings. These paintings are wild celebrations of colour, perhaps to echo the joyful way Mexican folk tradition celebrates death. Presented as the climax of ‘Reconstructing Memory’, the series is a stark high where one might assume there to be a quiet and solemn ending. These paintings and their substantial presence offer an exuberant spark of life at the final close, like a chuckle masquerading as a death rattle.