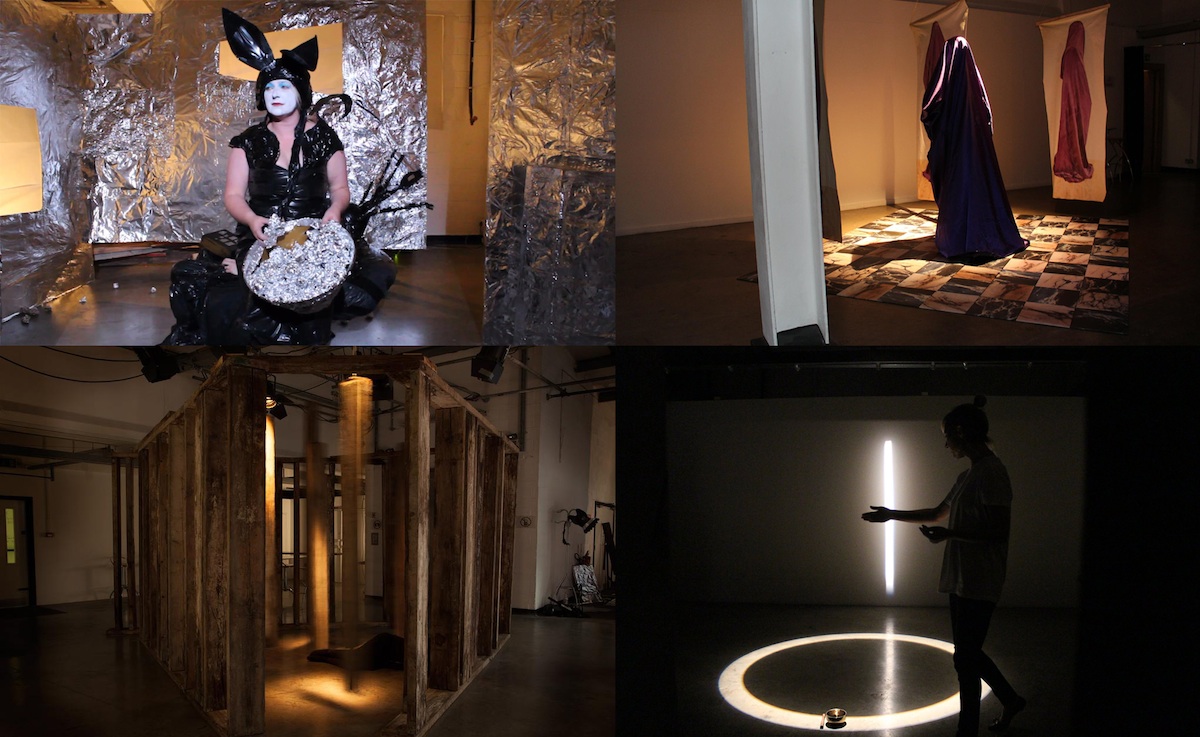 STILL at The Complex, Dublin

Still implies persistence: actions already in motion, carried by the propulsion of their own gravity. Still also implies inaction – a state of motionlessness. As such, ‘STILL’ at The Complex drew from these different meanings of the word, addressing concepts and ideas that affect Irish society. Overall there was a modular quality to the exhibition, with each of the four artists, Celina Muldoon, Austin Hearne, Annemarie Kilshaw, and Angela McDonagh, creating an overarching formal structure while tapping into distinctive yet interrelated ideas.

During opening night, the artists presented live performances, leaving traces of their actions as part of sculptural installations that remained on view for the duration of the exhibition. In Navel Gazing with Nora Helmer Celina Muldoon cultivated a false façade of domestic hospitality glazed in consumable culture. She performed within a haphazard set made up of household objects – foil, black plastic bags, and cardboard – an oversized child’s fort filtered through the adult imagination. Dressed in a costume created from the same materials, Muldoon began a cleaning routine to the beat of a pop music track. Filled with exuberant energy, she slipped through the threshold of the fourth wall as she mingled with the audience, serving wine and doting air kisses. Her exaggerated spectacle simultaneously revealed the limits of her illusion and hid an unknown truth, acknowledging the complexity of life within the home. In The Shrouds, Austin Hearne obscured his presence in a purple shroud, standing upon the simulacrum of a marble floor. Three larger-than-life images hung from the ceiling on chains, portraying the same figure and shroud as in the performance. In the centre image, there was a wet stain at the crotch area, providing insight into what Hearne was doing underneath the cloak that blocked the audience’s view. His covert act of masturbation made explicit reference to the sex scandals of the Catholic Church while also alluding to the masturbatory quality of rituals that have become disconnected from the Christian values upon which they are based, serving only to glorify the institution that they are associated with. In Floored, Annemarie Kilshaw created a structure that echoed the decay of a house. She lay in the centre of this form, with her eyes closed and body curled in a position of sleep. Her presence was silent and subtle, an unacknowledged shadow in the room. The structure and her performance spoke to the ongoing homelessness crisis in Ireland — where homes remain unoccupied and people remain unsheltered. Tucked next to Kilshaw’s forest of debris, there was Line to Circle by Angela McDonagh. Two light projections – a line and a circle – broke the darkness. In the accompanying performance, McDonagh told us a story of a line becoming a circle: these two shapes are the building blocks of our infrastructures, physical and metaphorical, which form the networks that mediate human relations. Over time, however, these structures have taken on lives on their own, and while we have created many of these systems, we have become alienated from them as they no longer accommodate our human-to-human interactions.

Just as Newton’s First Law of Motion states that “an object at rest will stay at rest and an object in motion will stay in motion,” social activity has an inertia that emerges from the complex networks of its interactivity. Various connotations of the term can be found throughout this exhibition, referencing different aspects of Irish society that remain our concerns – or are ignored as such – still.