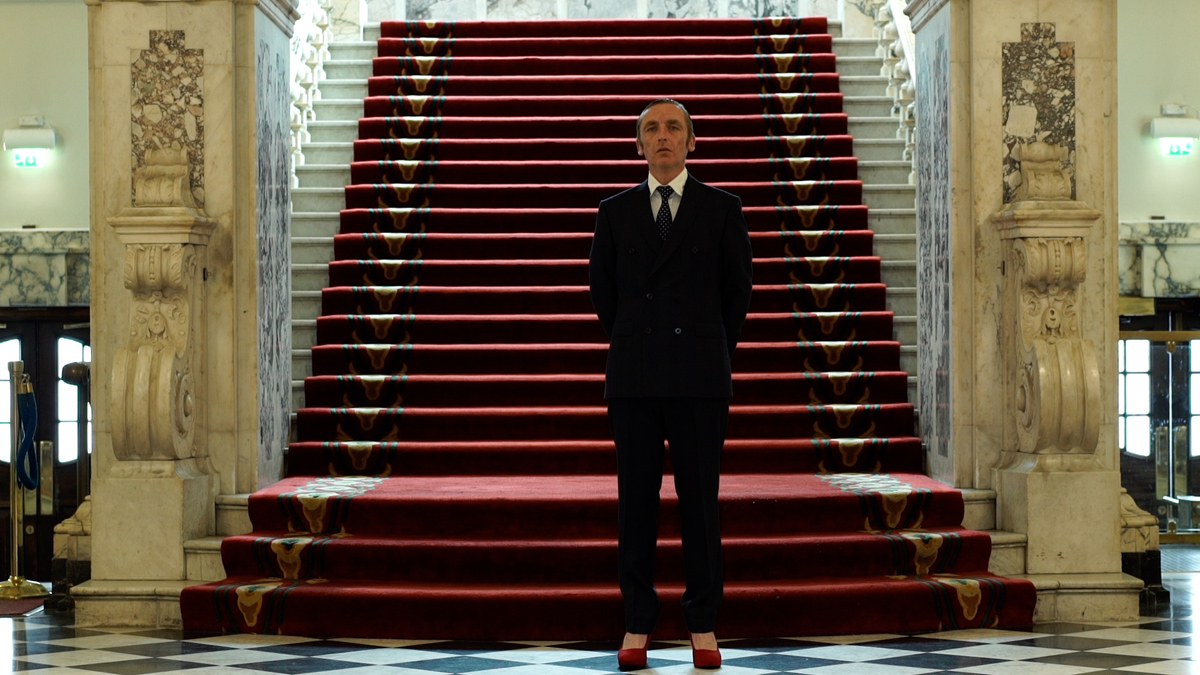 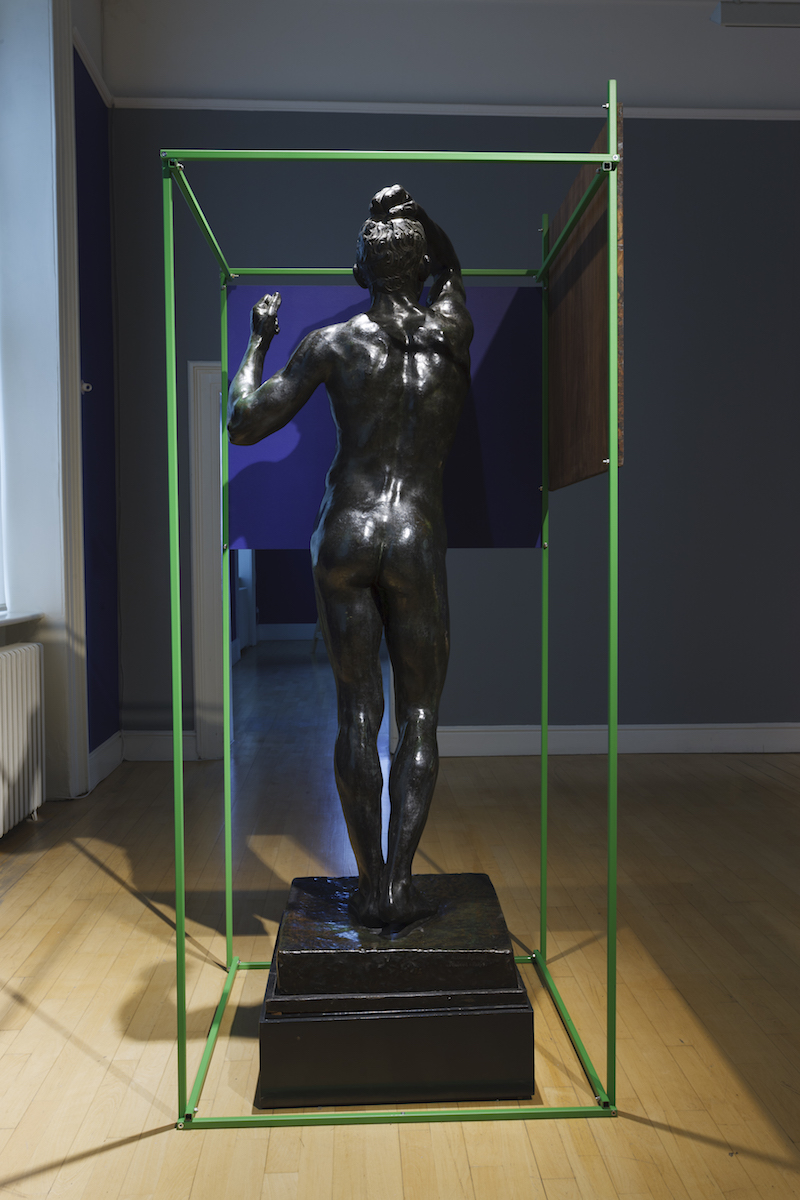 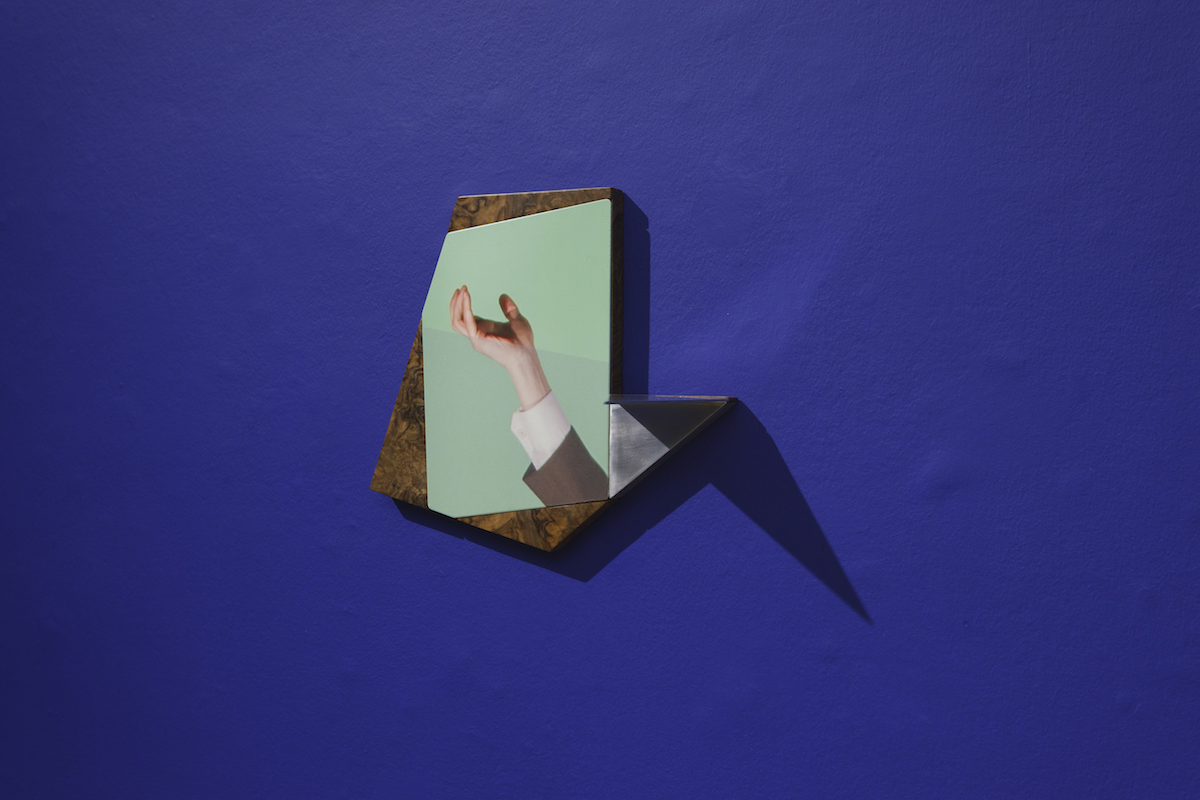 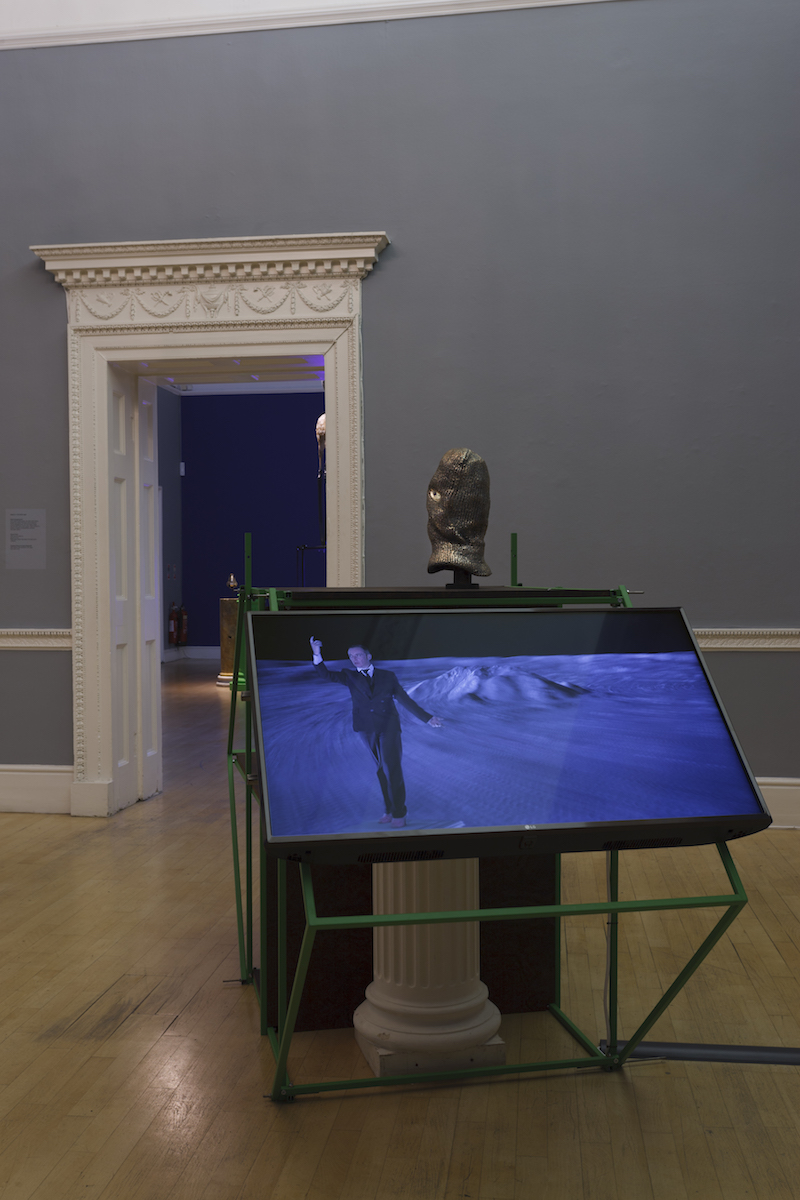 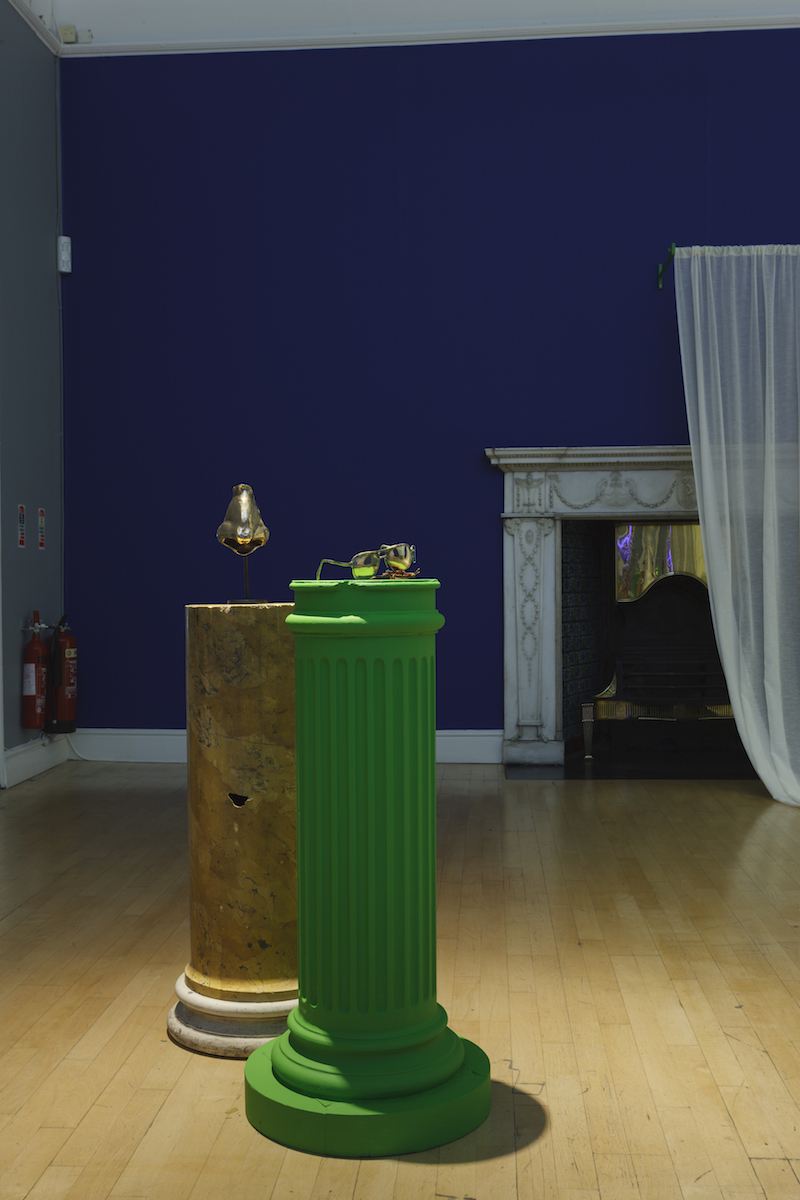 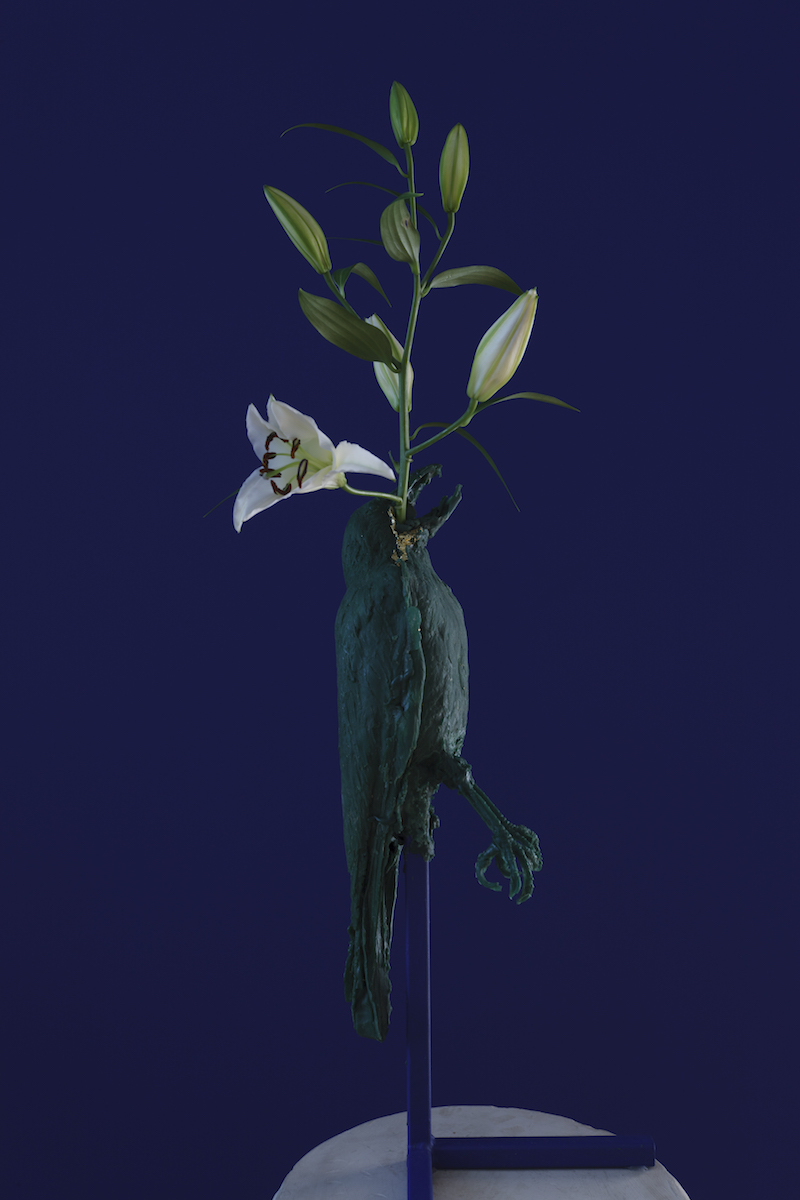 Deriving from the Ancient Greek word parallaxis, the Oxford English dictionary defines ‘parallax’ as “the effect whereby the position or direction of an object appears to differ when viewed from different positions”. The term can be applied to a variety of different fields of knowledge (in his work The Parallax View Slavoj Žižek lists its various uses, including “the parallax of nuerobiology”, “the parallax of ontological difference” and “the parallax of the unconscious”) and for the 17th century writer Sir Thomas Browne, it was a way of understanding the world itself: “many things are known, as some are seen, that is by Parallaxis”.

In a 2015 interview with the writer Darran Anderson, the artist Niamh McCann acknowledged her interest in the idea of the parallax in her work: “We can, for the most part, settle on the central presence of a mutually agreed subject matter or more simply subject. However, we bring to that viewing a parallax of personal or geographical subjectivity”. This exploration of the plurality of associations which we bring to a subject is apparent in Furtive Tears, McCann’s latest exhibition, which radically recontextualizes familiar images, objects and individuals thus allowing us to encounter them anew.

One of the central figures in this exhibition is Edward Carson, whose personality and gestures are threaded throughout Furtive Tears. Carson was the leader of the Irish Unionist Party and a redoubtable figure: in photographs he looks unimpressed with the entirety of creation and he has a face that appears as if it was carved from limestone. A sort of walking personification of the late Victorian era, Carson turned up at many of its most significant junctures. As a lawyer he defended both the Marquess of Queensberry, when Oscar Wilde sued him for libel, and George Archer-Shee, who was the subject of the famous ‘Winslow Boy’ case. But behind the image of an intransigent unionist which has clung to Carson since his death, there was a much more equivocal character. He was also a Dublin-born Anglican who had misgivings about the Northern Ireland he helped create. As someone attracted to the possibilities of the parallax view it is easy to see why McCann would be interested in him.

The most notable incarnation of Carson today is a statue of him which stands outside Stormont, one hand raised in an act of fierce gesticulation, as if reaching to snatch something from the sky. This pose is recreated in the video Furtive Tears, Salomé’s Lament where a figure named Boris (who bears more than a passing resemblance to Carson) stalks around the rotunda of Belfast City Hall. The location is significant as this was where, on September 28th 1912, Carson signed the Ulster Covenant to protest against the Third Home Rule Bill. Boris/Carson walks through the building’s empty hallways wearing a sombre dark suit and tie. But there’s an incongruous element to his dress, which undercuts the severe public image: a pair of bright red high-heeled shoes.

The video then cuts to Boris/Carson wearing a panda costume walking along the Black Mountain, with Belfast visible in the distance. He strikes the iconic pose of the Carson statue once again but this time it is almost comic in its grandiosity. Arms outspread, he proceeds to imitate another familiar stance: that of Jim Larkin’s statue on O’Connell Street, Dublin. The soundtrack accompanying the video, an original piece by David Coonan, reinforces McCann’s cultural collaging by blending elements of Strauss’s Salomé with Donizetti’s aria Una Furtiva Lagrima. Carson, Larkin, Wilde, Salomé, each of these individuals comes to us with their own set of cultural baggage (just think of the various ways that Salomé has been mythologised, vilified and portrayed by artists down through the years). McCann’s choice of these figures isn’t explicitly polemical, but rather a way of looking, in her own words, “at faultlines and nodes of contact across divides”.

What those divides are McCann leaves unsaid, but oblique references to the Troubles occur throughout Furtive Tears. The most explicit allusion is a bronze balaclava which could have been chosen for its parallax potential. As McCann mentioned in a recent interview: “The balaclava has particular associations – but it’s also a woolly hat. Its meaning lies somewhere in between amicable and threatening – it’s both cute and attractive and also it carries with it all the darkness of a mask.”

McCann continues her investigations into the same theme across various media. There is a restaging of Rodin’s Age of Bronze sculpture where the figure is partially blocked by a walnut panel. The statue’s familiar pose is obscured, thus forcing the viewer to look at it from a different angle. This process of estranging familiar gestures recurs throughout Furtive Tears. In a series of images entitled Sculpture Picture Furniture Gesture we see disembodied hands pointing, grasping and signalling, but removed from their original context we can only guess at their significance. In another video, and one of the exhibition’s most engaging works, we encounter Boris/Carson trying to recreate the familiar pose of his Stormont statue as he orbits a lunar crater. This time, while wearing a pair of men’s black dress shoes, he struggles to keep his footing and looks as if he is going to fall at any moment. McCann appears to be taking her line of thinking to a logical extreme: What resonance can his gestures have in a cold void, far removed from any recognisable context?

The traces which remain from an historical moment or an individual seem to be of particular interest to McCann. As she mentions in her interview with Anderson: “I look at subjects that are still current or, more particularly, elements that retain some cultural currency. It is curious how certain images, objects, methods of making or stories survive and live on whereas others fade. This cultural debris can be revealing.”

If Furtive Tears has a failing, it would be from a surfeit of installations and ideas on display. For example, it was almost too easy to miss the series of flower vases shaped like birds which accompany the exhibition. According to the exhibition notes these are a playful reference to Sir Hugh Lane’s request that the gallery be decorated daily with fresh flowers, but as objects they don’t really manage to distinguish themselves amongst all the other items on display. More significantly, it is difficult to see how they engage with the larger schema of the exhibition in any meaningful way. There is also a bronze nose entitled Not Tycho’s but Collins’ nose which is not only based on Séamus Murphy’s bust of Michael Collins but also the false nose which Tycho Brahe wore after being injured in a duel. This feels like an abstruse reference too far.

However, it is still tempting to try and untangle the web of associations that McCann has created. The connective purpose between these objects is all our own as Furtive Tears draws discreet lines of thought and opens alternative doors for the viewer into the past. McCann is testing the pressure points of her subjects, turning them upside down and seeing how they look through different mediums. Ultimately, it is the exhibition’s interplay of materials and subjects which allows us to experience the parallax view.