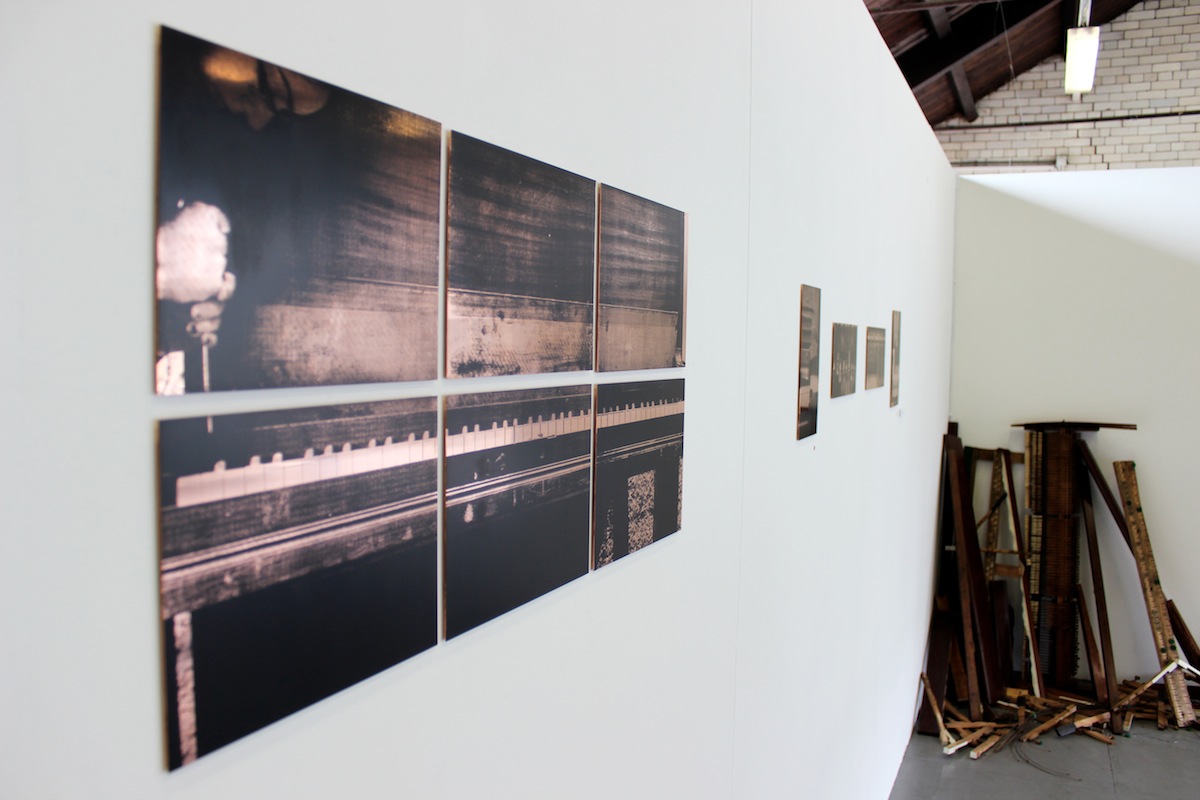 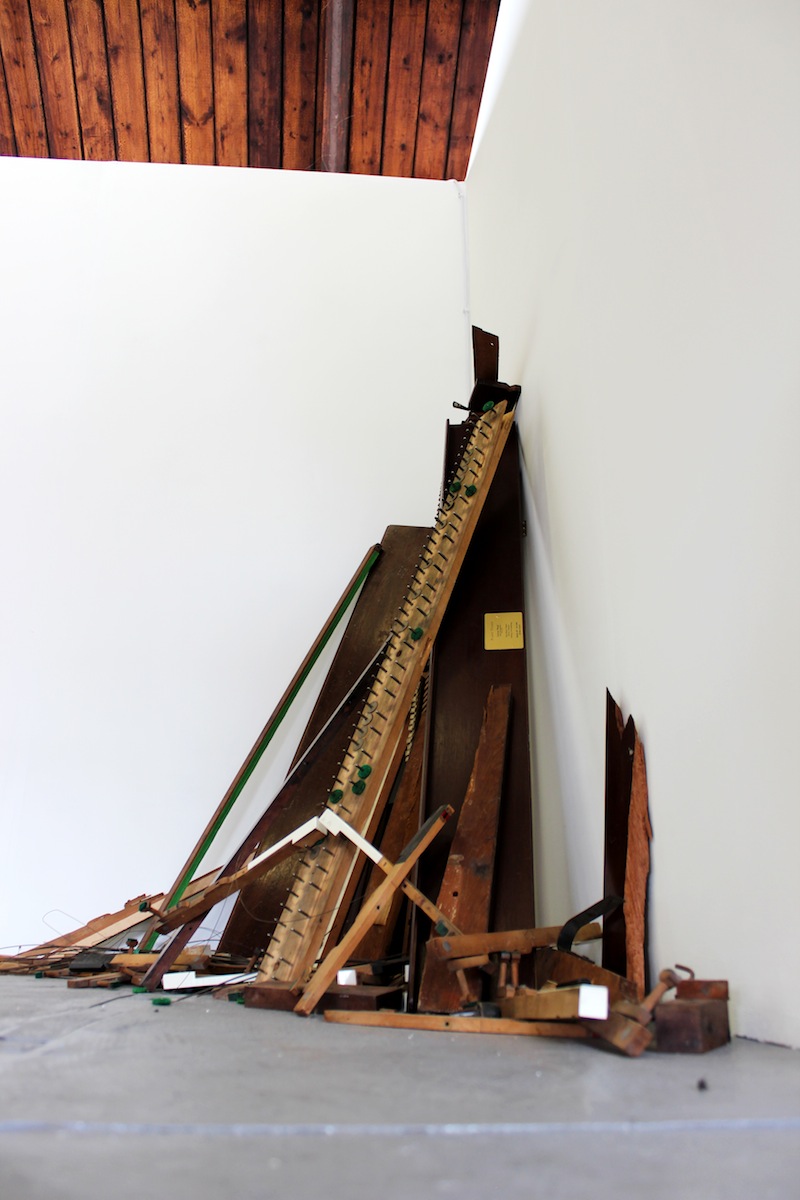 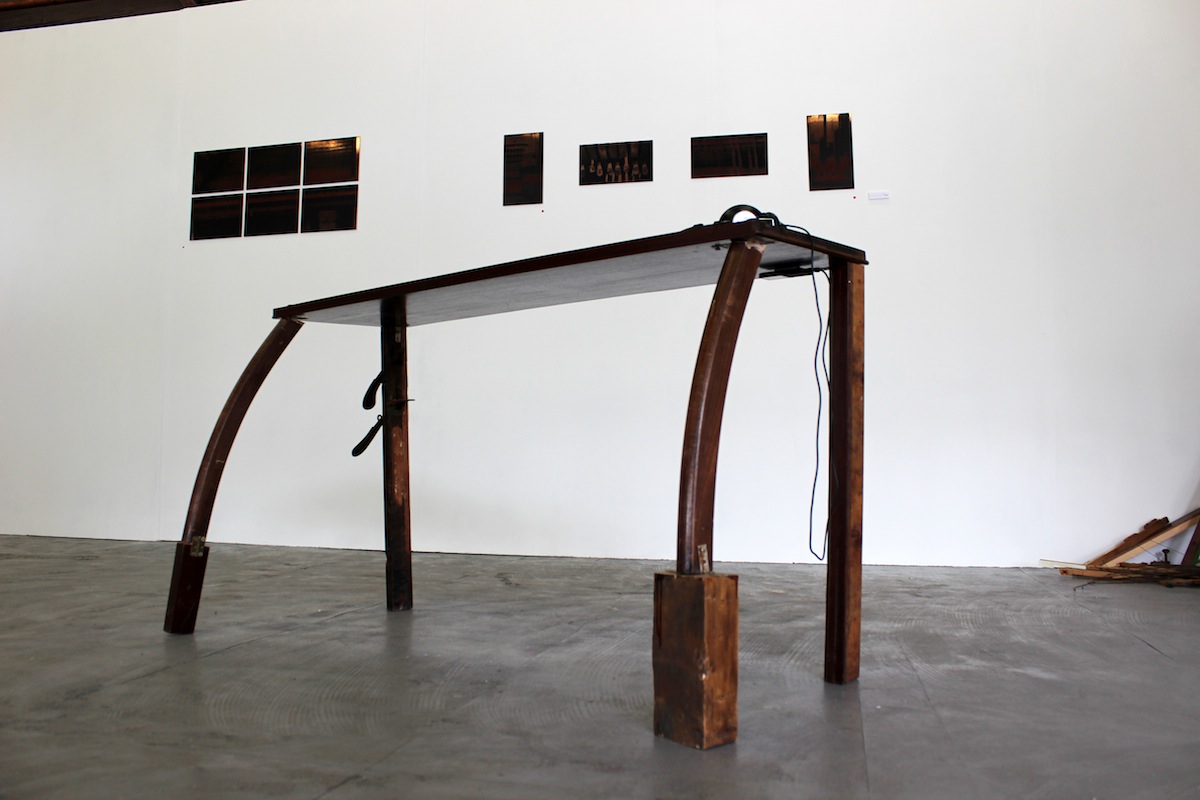 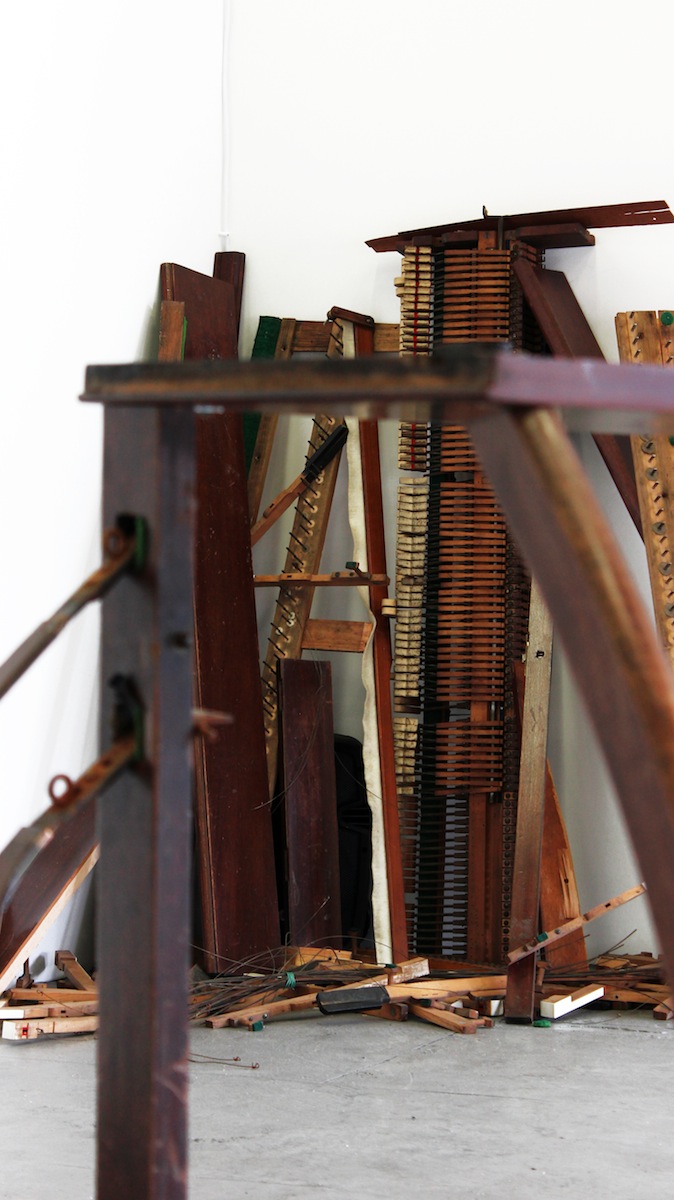 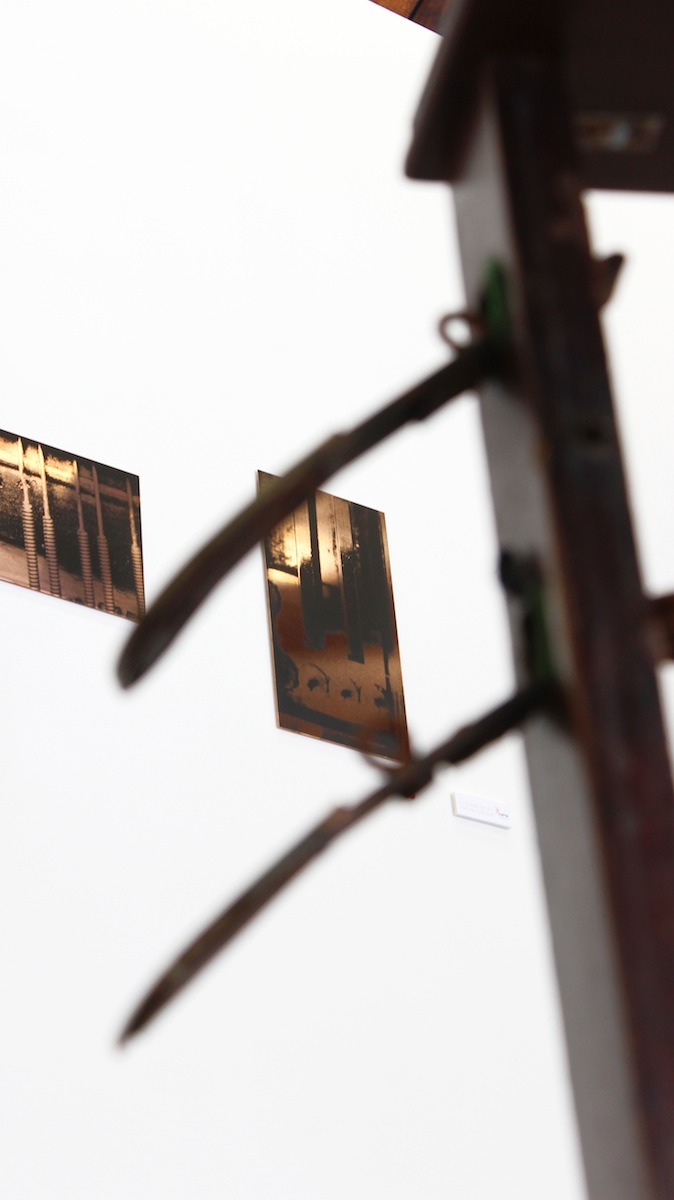 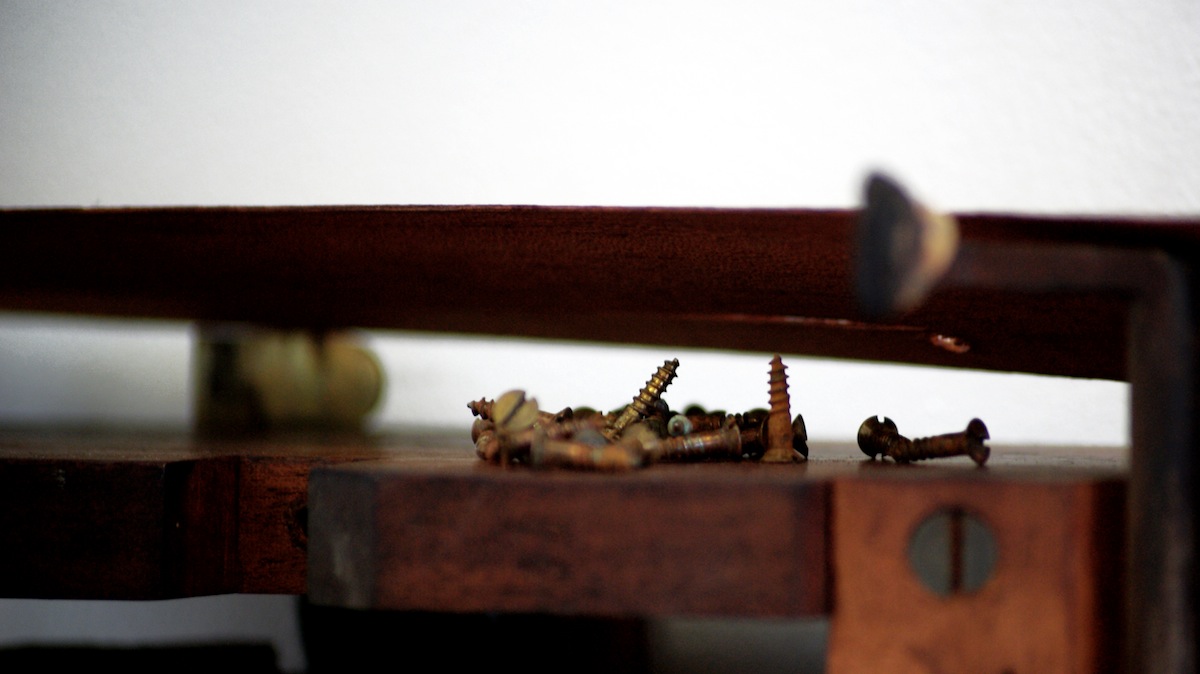 In Andrea Calabro’s The silence of growing, fragments of an upright piano, which the artist took apart, have been hobbled together into a table. Snaking circuitously onto the table’s panelled working surface, a set of headphones relays a recording of a classical piano composition being played. Observing what’s left of the dismantled instrument, the exposed entrails of hammers, screws and severed strings, stacked in a corner behind the DIY table, feelings of intense joy in seeing the keys of ivory white privilege dislodged from their glossy coffer, the ripped-out tongues of the pedals’ tarnished leavers are inseparable from the melancholy of a busted boogie-woogie.

It is tempting to see the destruction of the piano as a welcome assault on cultural hegemony, and the classical Western musical canon of which the piano is an integral part, a diseased organ ripped out and reimagined, tempting to opine upon individual virtuosity as a tool of oppression, a constricted, regimented form of nimble-fingered domination, seeing in the sheaf of severed piano wires the remains of a gutted garrotte. And yet the musical canon contains John Cage’s 4’33”, a work that, when it was first performed, tore its audience’s expectations to shreds with voracious efficiency. The contingent, incendiary silences contained within its three movements celebrate an exhilarating indeterminacy.

Standing at an intersection between creativity, criticality, innocence and obligation, I try to induce a sense of belonging by identifying the composition. As I hold the flex of the headphones the music flows into my ears, through my fingers, like a breath of air. I have come, for the most part, to this unsightly table and the stacked remains through exercises in pedantic demagoguery, the polished scales and soft pedalling of arrested maturation, a renunciation of the violence of engagement and release, ascent and descent flattened and hammering out in notes of pedestrian circumvention.

I drop the flex and look up at the suite of prints on the wall – screen prints on copper plate – glowing in the morning light. It’s refreshing to see destruction unashamedly deployed, its aftermath screwed into a provocative, precarious renunciation. The artist, who after almost twenty years abandoned playing the piano, wishes to “physically describe the transformation from childlike creativity, to adult necessity”. What is prefigured by this disruptive physicality imprints itself on the imagination. Emotional log jams become reflectively available. The correspondence between ground and imprint traces processes of excoriating growth, over which the soft furnishings of ideological interpretation and fashionable formulation have smothered and choked off the restless flow of uncensored cognition.

Andrea Calabro’s work returns me to a lapsed moral order. Through the pain of such psychological and emotional labours, confronting the scorched earth of delayed conclusions and abandoned reckonings, we are birthed briefly into a vivifying death, into an end to rehearsal, competitive practice, proprietorial transcendence, the endless striving for excellence.

The makeshift table embodies something of what it is to be an artist now. A freighted flex snaking circuitously onto a refracted and unstable surface, a resuscitated gasp of emotional fragility and subjugating memory, driven by necessity and obligation to enter into orbits of inconclusive contemplation, of looping, repetitious visions and re-visions, cutting through the polished instruments of orthodox ideation, a childhood’s worth of ecstasy and cruelty and unfulfilling fantasy.

Still in the dark as to the composition’s identity, I pull the headphones from my ears. Discordant sounds are coming from the piano’s stacked remains, the regimental screeches of dreams being pulled apart, assumptions splintering into staves of belligerent unbelonging. The imprint from inadequacy and instability resonates against the white noise of surface perfection. The sunken sun-drenched pings of endless expectation echo through partitions of distracted self-absorption. Against the blackened ground of an artistic afterlife secluded lagoons are drained of never-ending sunlight.

From the ruins of an adult life you attempt to fathom your childhood, plundering and despoiling your innocence and your virginity, gathering up the pieces of a despotic deposed autocracy, the drowned out and upended harmonies of a disabled musicality, in the hopes that one day a banjaxed dawn might break. As I walk around the table the images on the copper plate hover between the daylight and a reflective darkness.