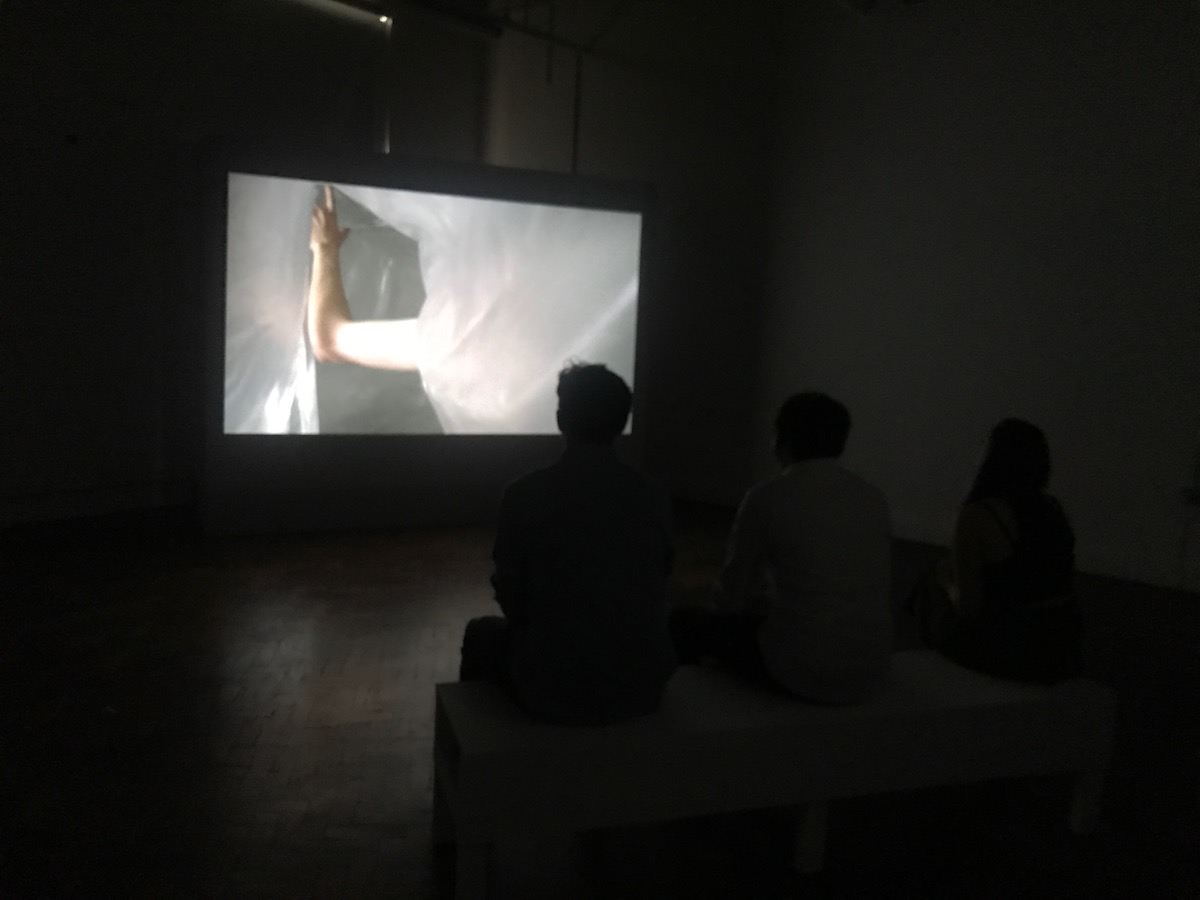 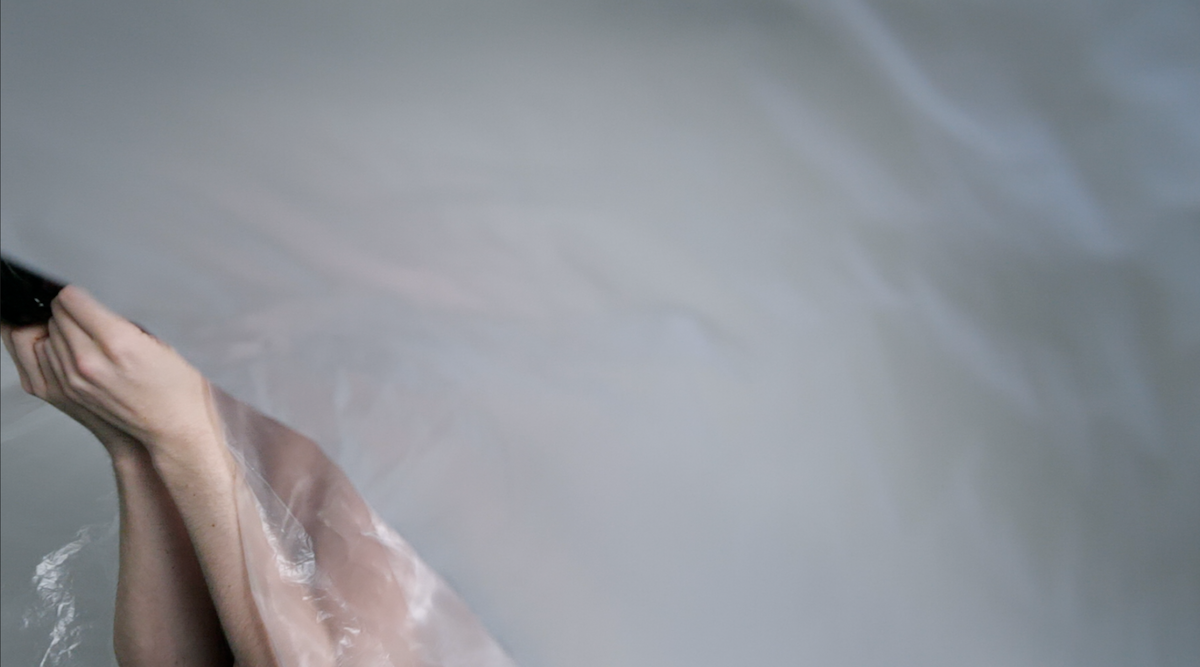 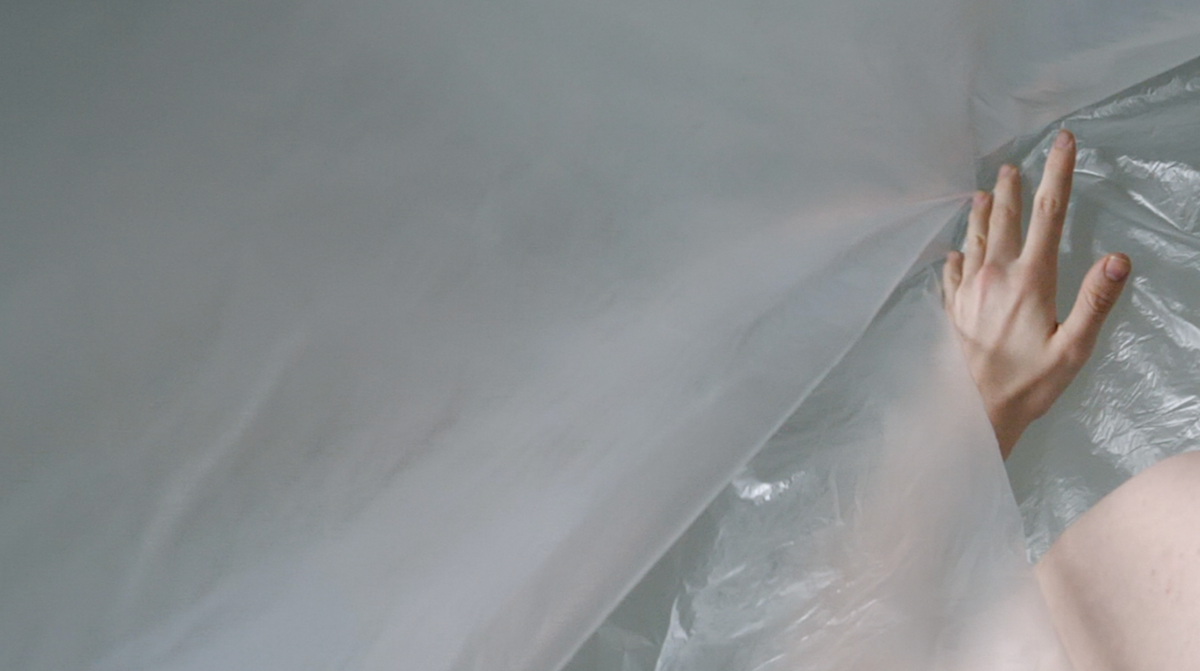 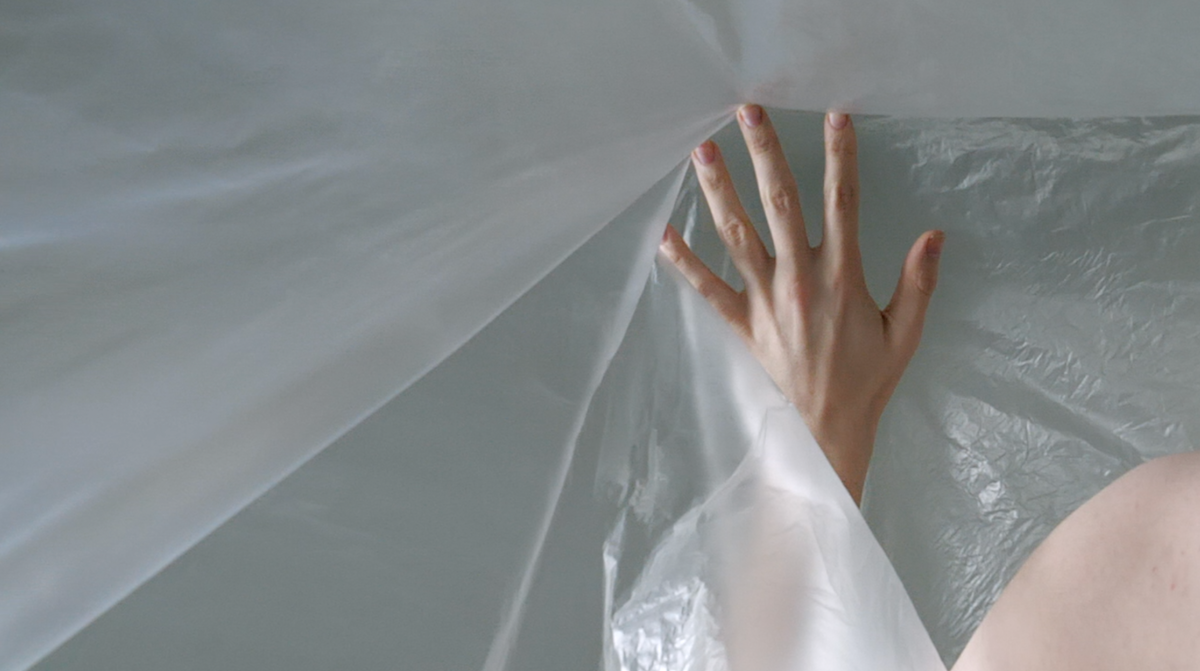 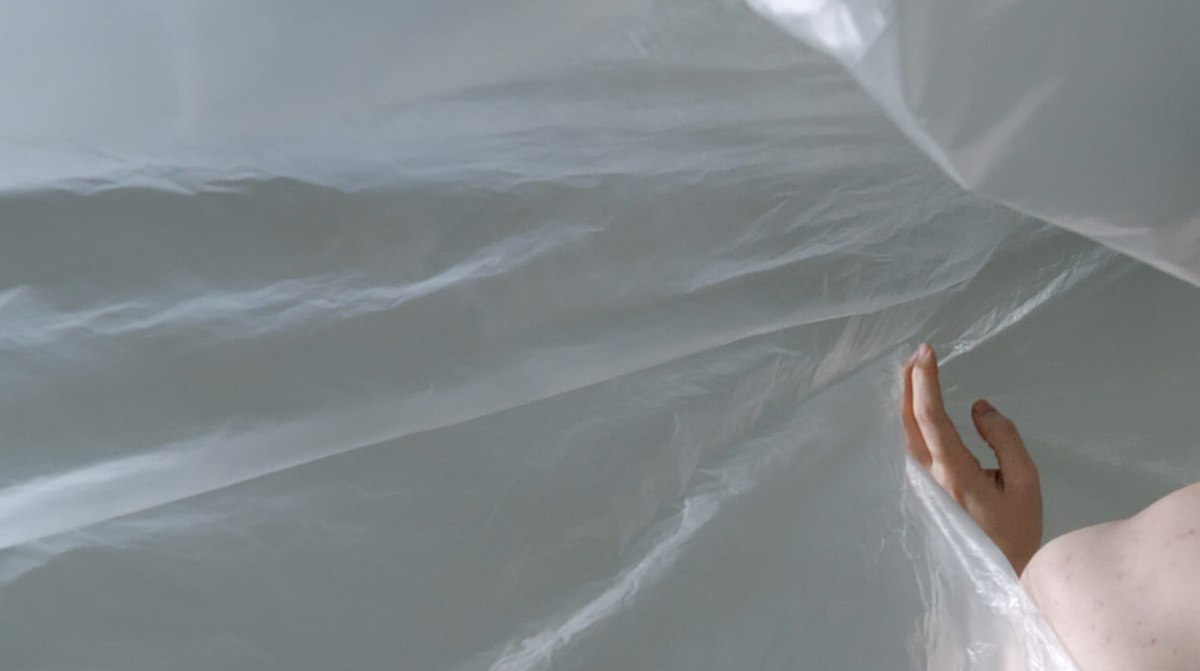 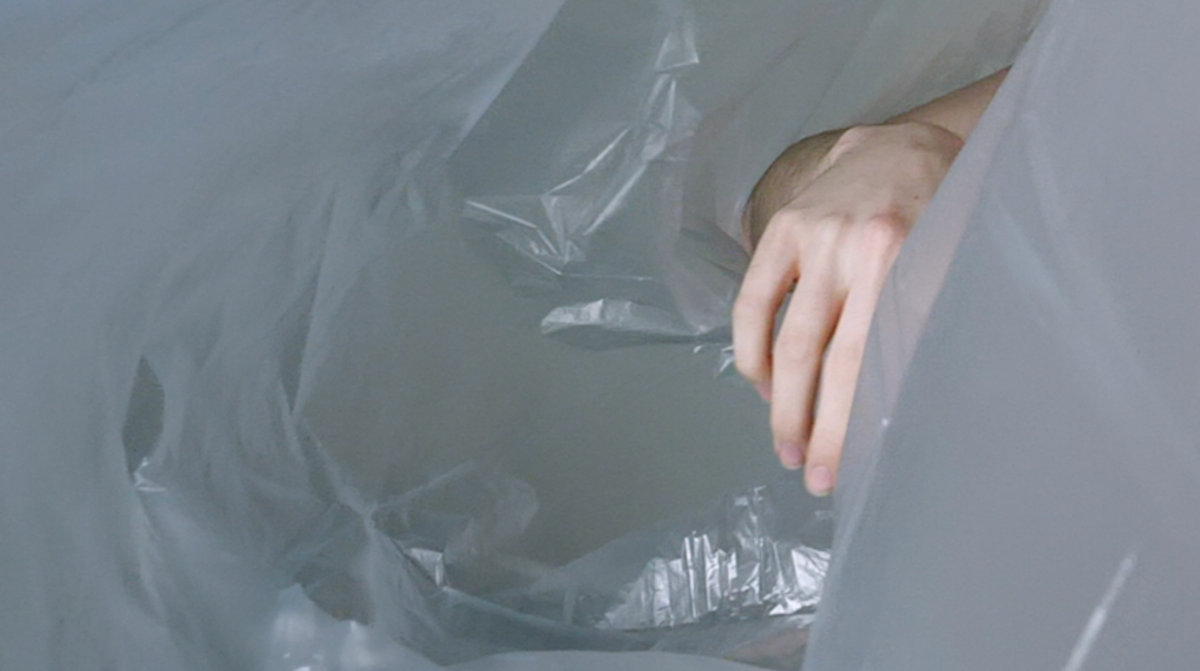 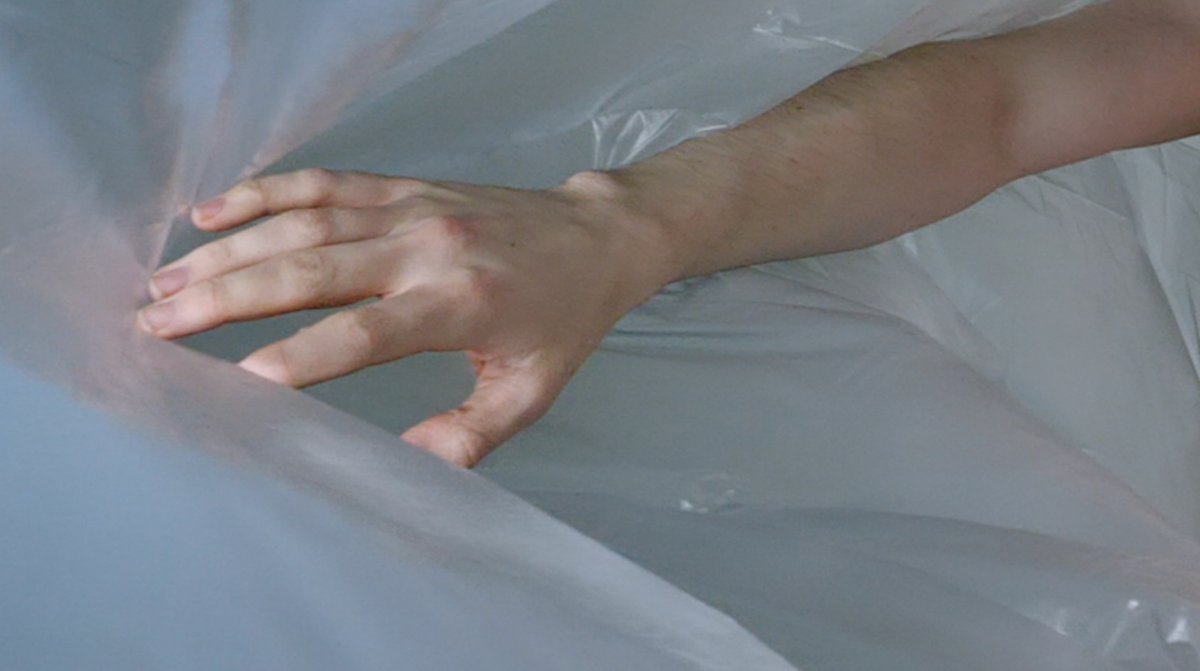 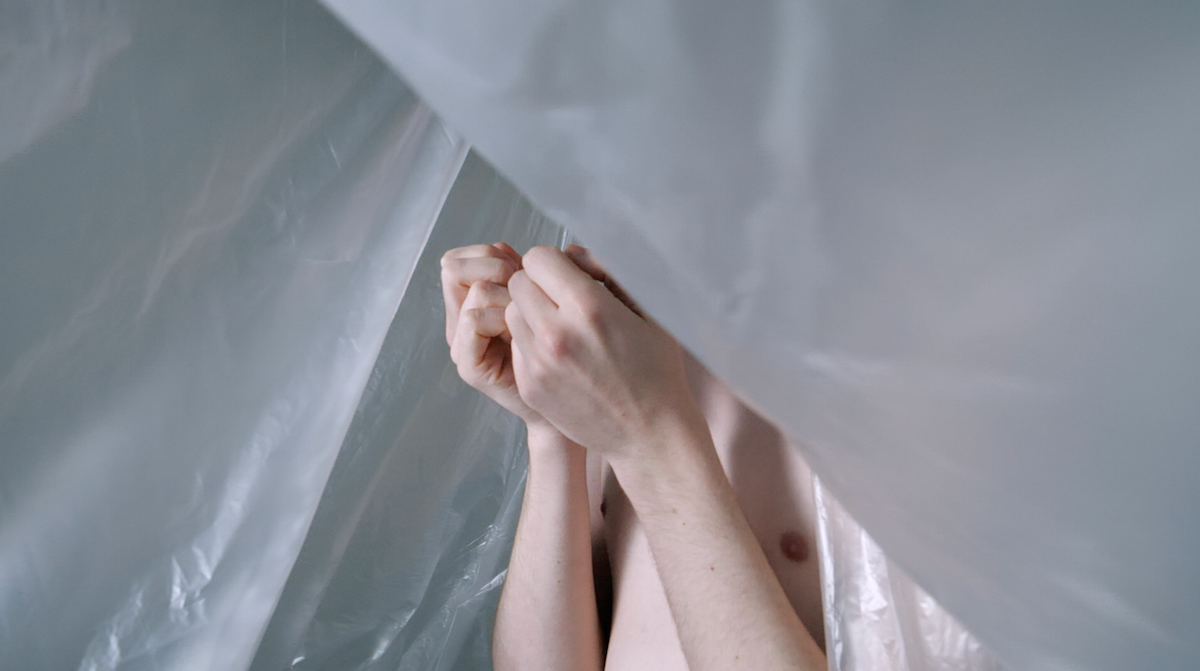 In one of the corridors of IADT during their 2019 Grad Show, Leah Harris’ Fabricated Tribulations, a 3:40 min long video piece, sits projected at an oblique angle in the corner of a small room. A constant, ever present metronome against a rumbling soundscape fills the space, the atmosphere claustrophobic, thick. The screen is filled with light, diffused, opaque plastic, with a young man trapped inside.

The inescapable plastic seems to come straight from the lens of the camera, the pressure direct and pointed at the figure, occluded by the billowing material. The atmosphere is heavy with tension, as the figure alone tries to move around inside the suffocating sheeting, pulling, reaching, searching for escape.

The young man’s voice starts over the metronome, speaking of “…ever impending doom…’ and the ‘…moment of stillness as crippling panic looms…”.

This is no sublime visual adventure.

It is a tender, poignant portrait of a person struggling with the frustration and claustrophobia of the constant, incessant anxiety that underpins our current reality. It is difficult not to read the piece in the context of the many tyrannical realities of our current existence – surveillance, precarity, the inescapable permanency of social media. Of a life writ public – every act, decision and mistake recorded for an unknown digital posterity.

Pressure builds, the intensity of the camera’s gaze unrelenting on his struggle against his own mind.

The spare, thick, creamy blue light softly diffusing through the swirling plastic gives a particularly menacing tone to the piece, so totally at odds with the struggle for purpose and identity of the person trying to escape the oppressive lusciousness of the billowing plastic enclosure.

“It advances by the minute, taking hold with a terrible weight”

The plastic sheeting appears to be a deliberate nod to this current generation having to deal with the waste and bad decisions of those gone before. A system dumped upon them by previous generations in a charge for progress. A constant, accumulating detritus of an increasingly suffocating material builds up in the physical and mental realities of those left to deal with the effects of this ‘progress’.

“We feel trapped in our choices…”

He becomes increasingly frantic in his need for constancy, grasping for solidity in the soft, yielding plastic, struck by the twin tyrannies of choice in a time of perennial inconstancy. Precarity underlining every moment of his existence, no ground, no solid, no foundation from which to build a self.

Eventually overcome by the pressure, the constant, nagging anxiety, he becomes overwhelmed, unable to fight, to grope for solid ground.

Head in hands, the metronome takes over, and he fades into a black oblivion.

Harris chooses to relate her boyfriend’s experiences through the work rather than her own. By using a male figure to act as a proxy for her own investigations, she appears to subvert old gender casting. Whereas before, women enacted male ideas of what they could be, or who they were, or what their experiences were, here Harris seems to be an observer of issues she sees played out in her boyfriend, using him as a platform for her observations as a woman.

Beautifully shot with a menacingly tender gaze, a subtle, well-judged performance from Harris’ partner creates a timely, relevant piece loaded with atmosphere and anxiety. Harris has created a sharp, tight, articulate commentary on the struggles of trying to create a life, a self in society today.