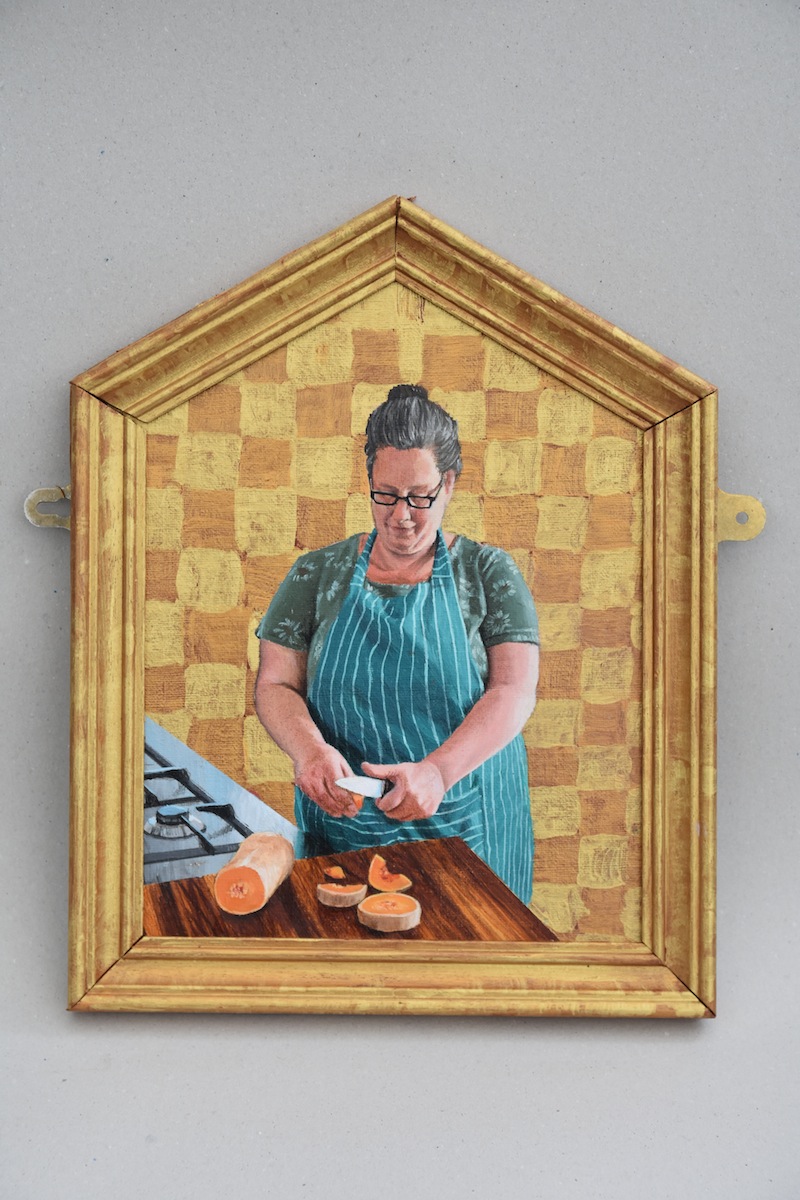 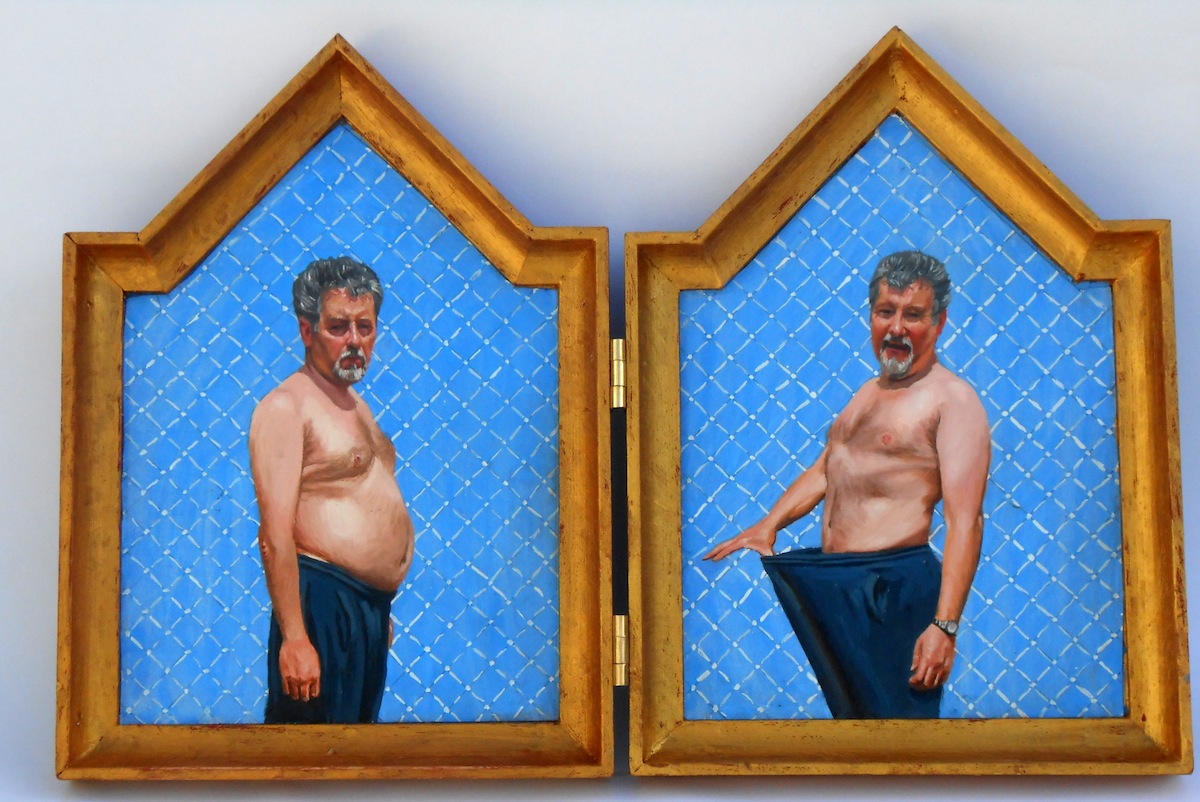 Paul MacCormaic, Before and After. 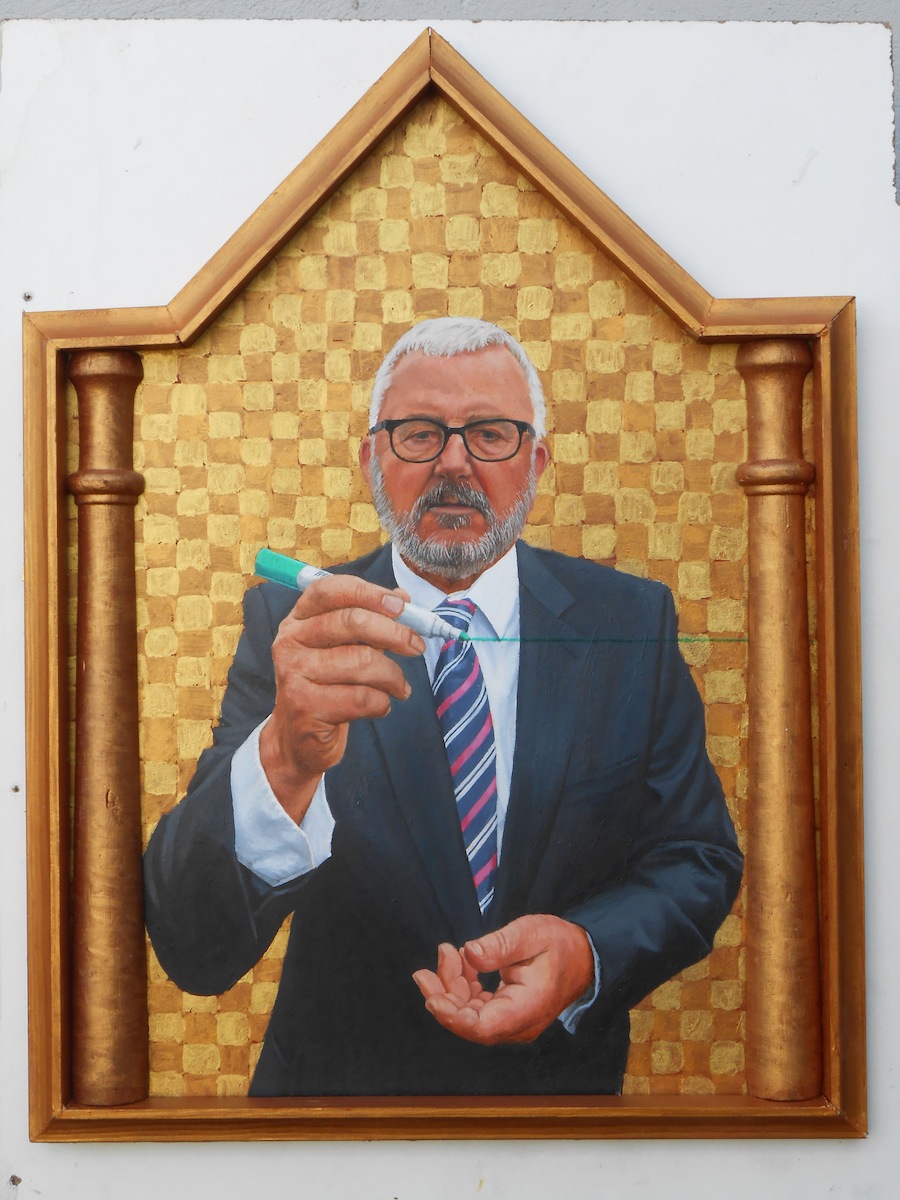 Contemplating the icon with faith and love draws us out of our material world and into that divine world to which we will only have access after death.
– Sr. Wendy Beckett

The words of art historian Sr. Wendy Beckett speak of a faith and a religious set of values that are a point of reference for Paul MacCormaic. A point of reference but not an inspiration. MacCormaic sees the shallowness of the materialism that defines contemporary Ireland but he is not waiting for a redemption to come after death. He has long had an admiration for Byzantine and Renaissance art and he has adopted the aesthetic of Christian iconography and adapted its vernacular for a strictly secular purpose.

His work, elegantly showing in the Axis Centre Ballymun, is a reflection on contemporary Irish life, a reflection laced with dark humour and rueful irony. MacCormaic is a free-thinking and agnostic commentator, who recognises the collapse of religious orthodoxy. He sheds no tears for the Catholic strictures that shaped his own upbringing and the mores of the Irish state throughout the 20th century. But he does constantly address issues of values, ethics and morality. Using conventional materials and techniques – oil and acrylic paint, representational imagery, portraiture, faux mosaic – as well as cigarette foil, recycled timbers and plastics, he displays a confident and impressive technical virtuosity. These contemporary icons look like icons as we have always known them, even to the extent of a palette that reflects the range of early Christian icons.

The exhibition is marked by humour, with a wicked undertow. Thus The Poverty Line Setter is both a finely worked portrait and a wry and devastating commentary on the dehumanisation of social policy in Ireland. Before and After and One size fits all – me arse are witty takes on the pressures that consumer culture imposes on people. Some of the works, however, carry a stark power that can afford no humour. The horror of war is graphically portrayed in Vision of Hell, Iraq 2007 and equally in the portrait of a badly beaten victim of random violence in a Dublin street.

Several pieces depict women at work, in employment and domestic settings: peeling vegetables, cleaning floors, shopping. The striking Madonna of the Cordless Phone, in its colouring and its framing, echoes the classic icons of Mary. That work, and the exhibition in general, carries an echo of The Ikon Maker, a novel written by Desmond Hogan in the 1970s. This was the story of a Galway woman trying to make sense of the changes her son has gone through in growing up, leaving for London and returning with a vastly different set of values and experiences. She tries to make sense of him by reference to his habit as a child of making small images and collages, like icons.

Paul MacCormaic is an icon maker of contemporary Ireland. His exhibition is a collection of work, carefully conceived and composed, that honours an old and established mode of expression. In adapting and subverting that tradition, MacCormaic makes a political statement that is ironically more critical of contemporary consumerism and selfish individualism than of the religious tradition that it has already rejected.