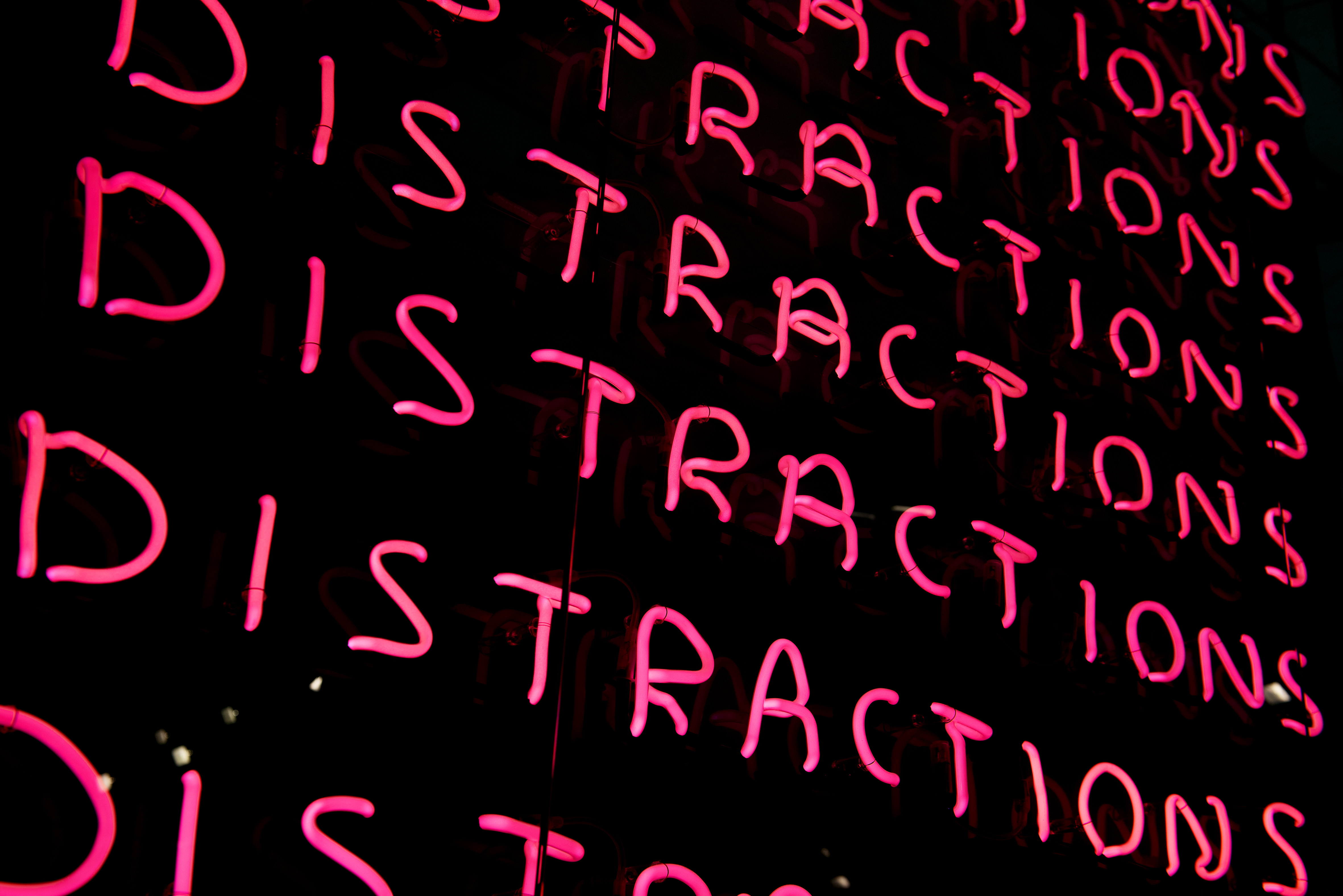 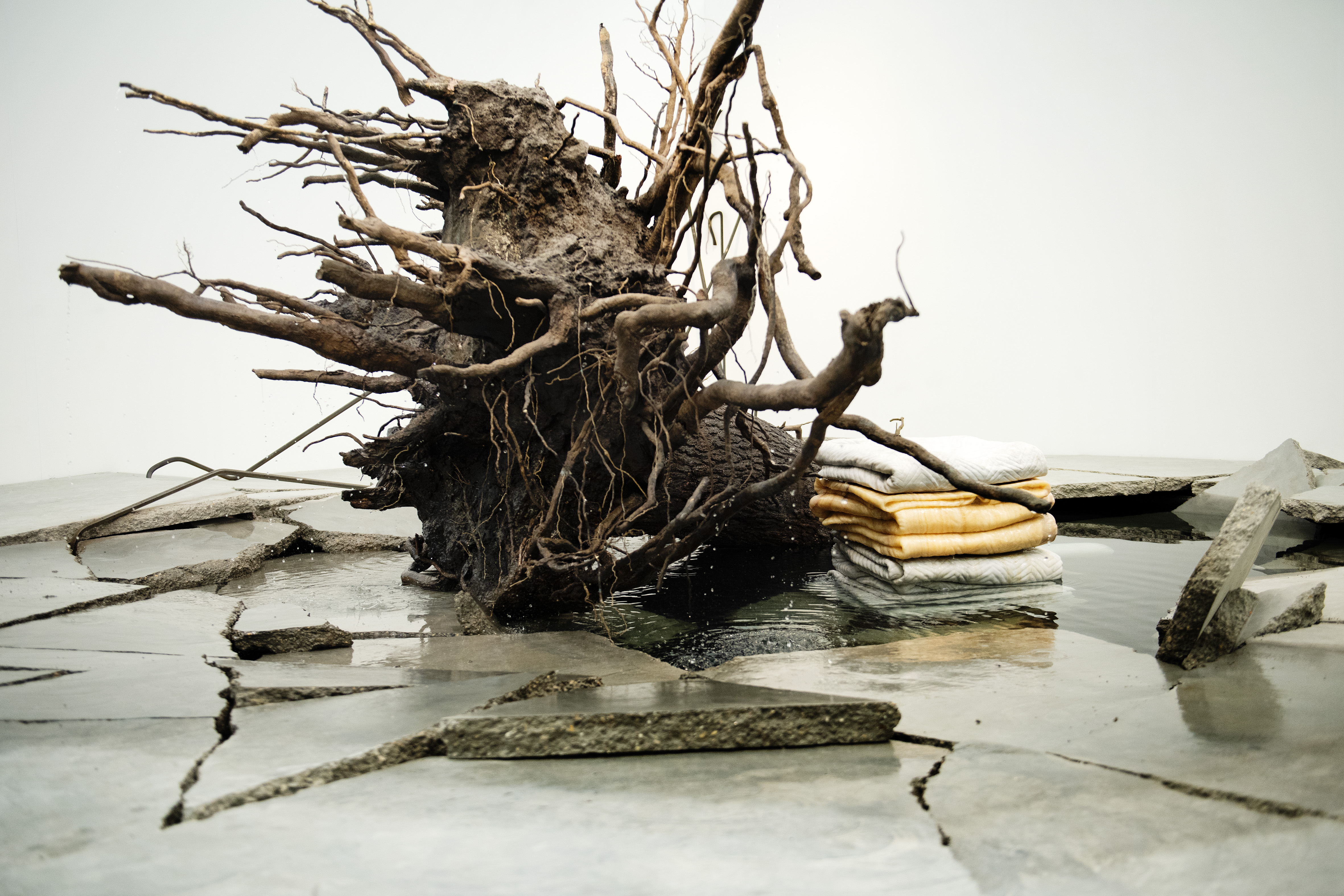 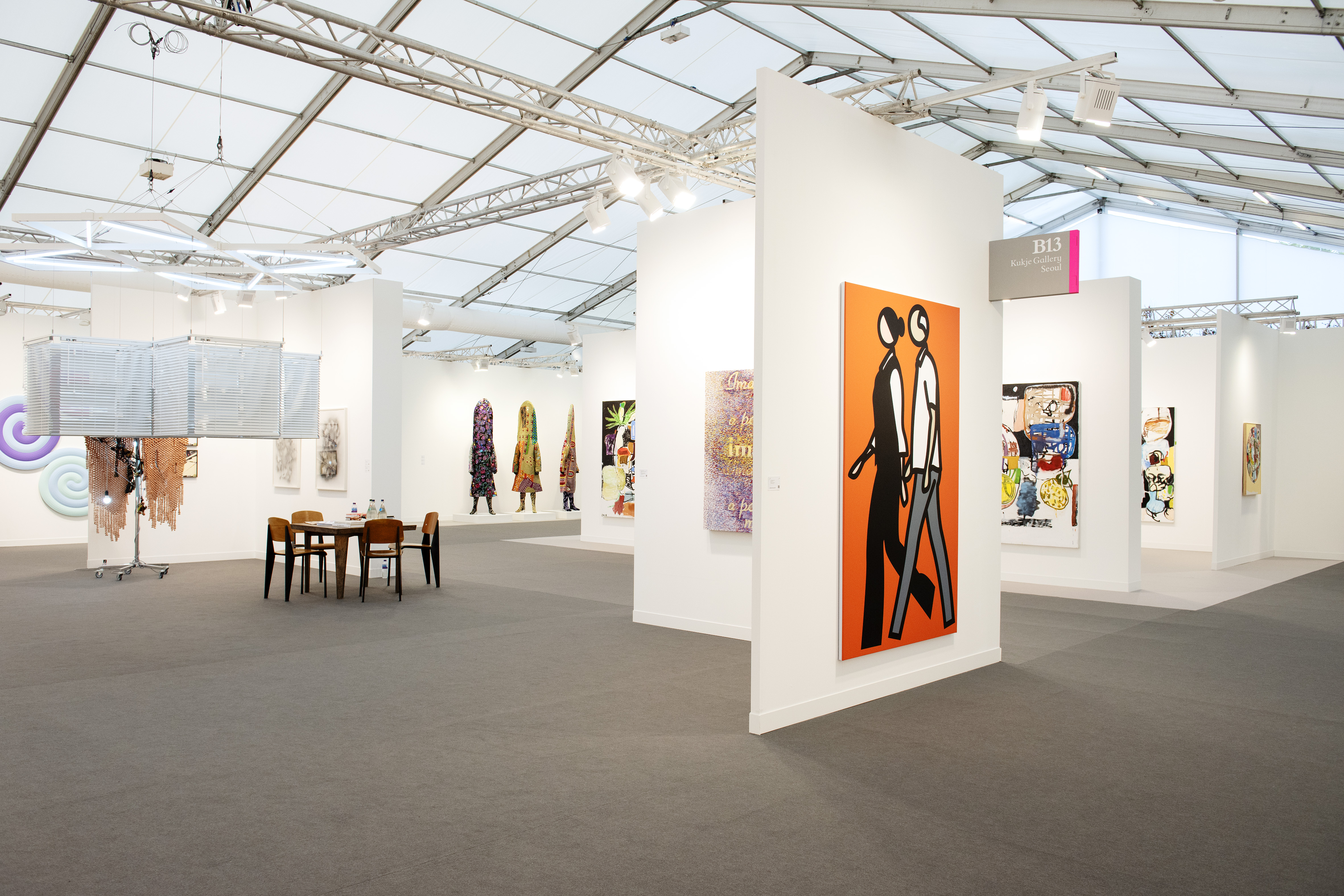 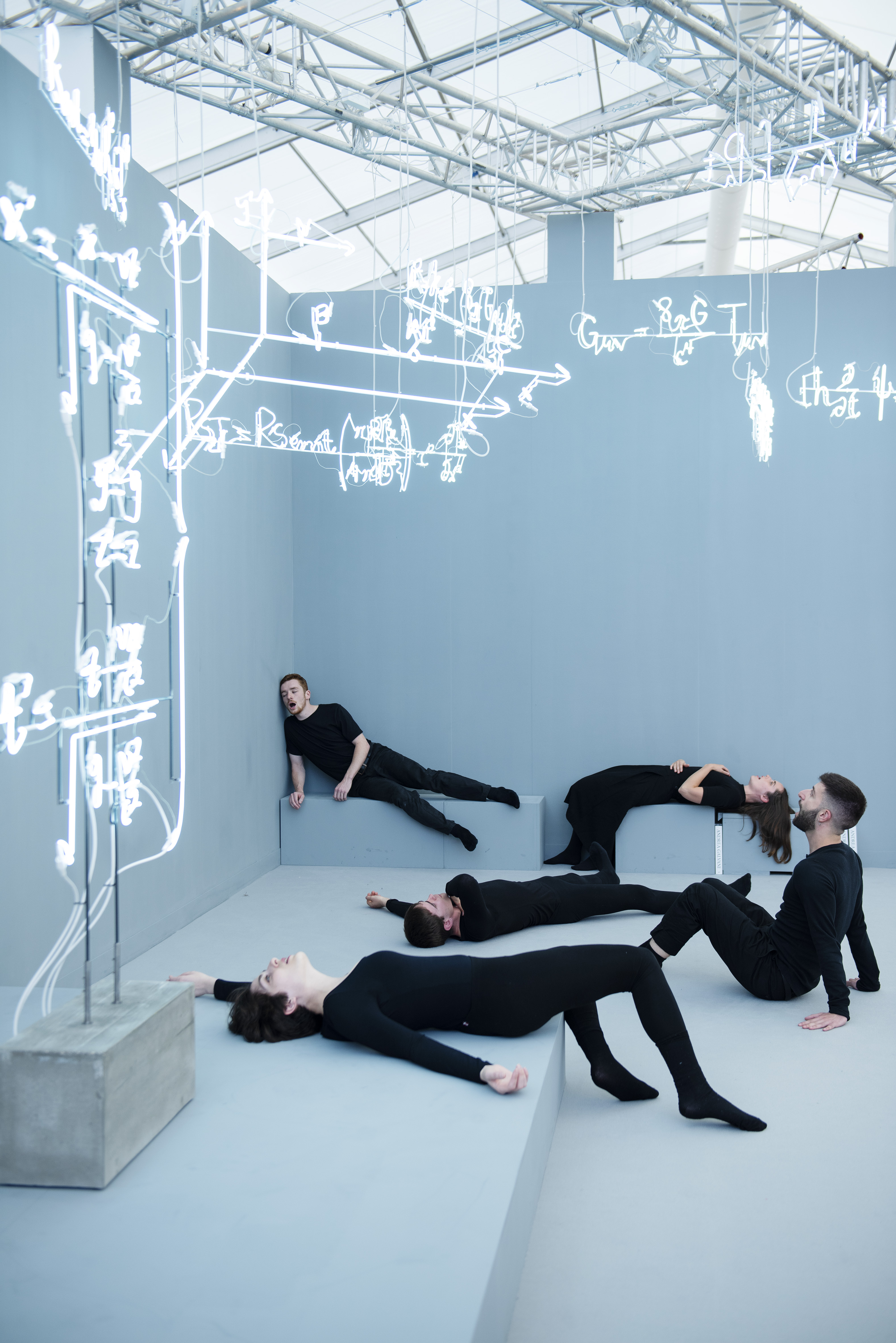 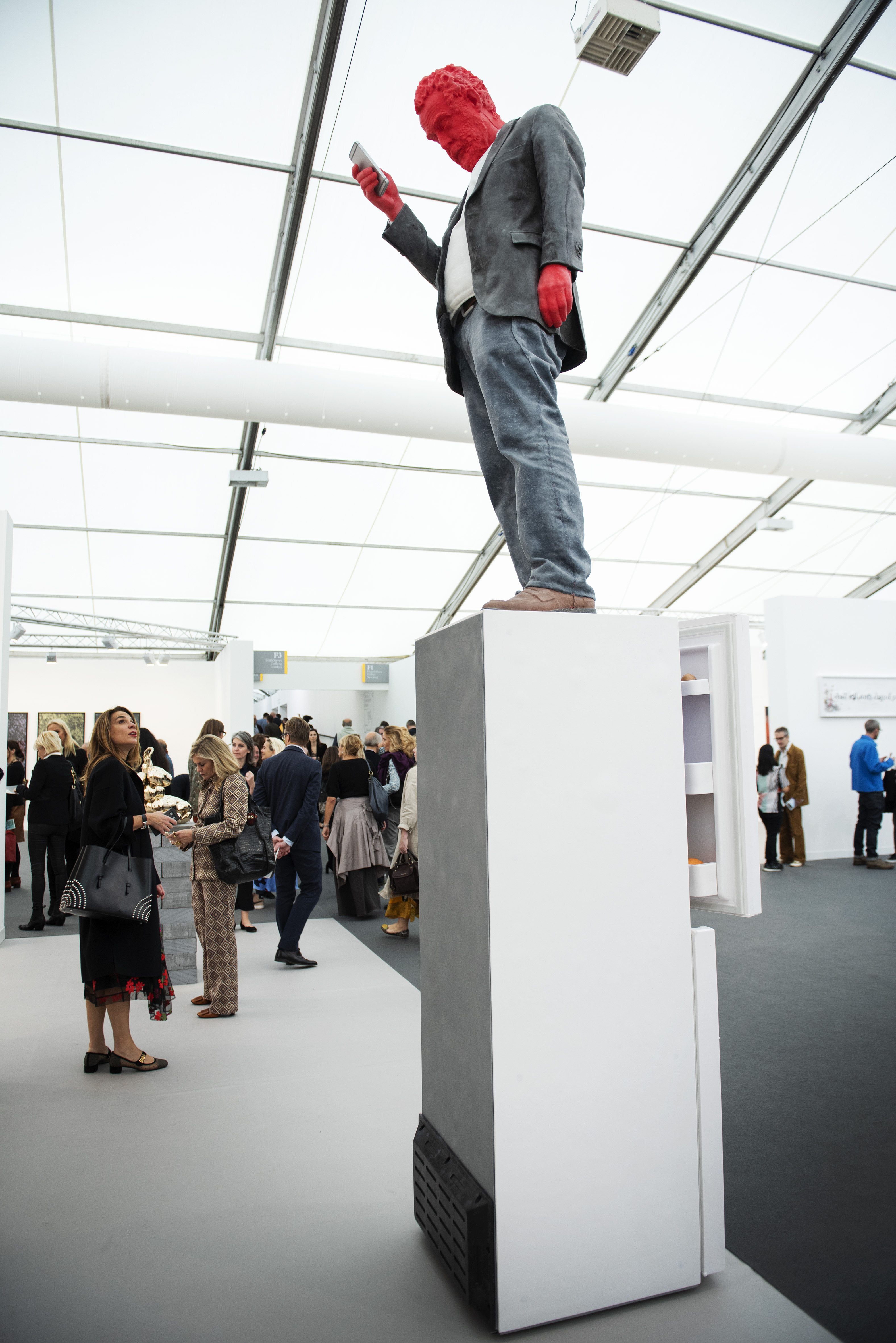 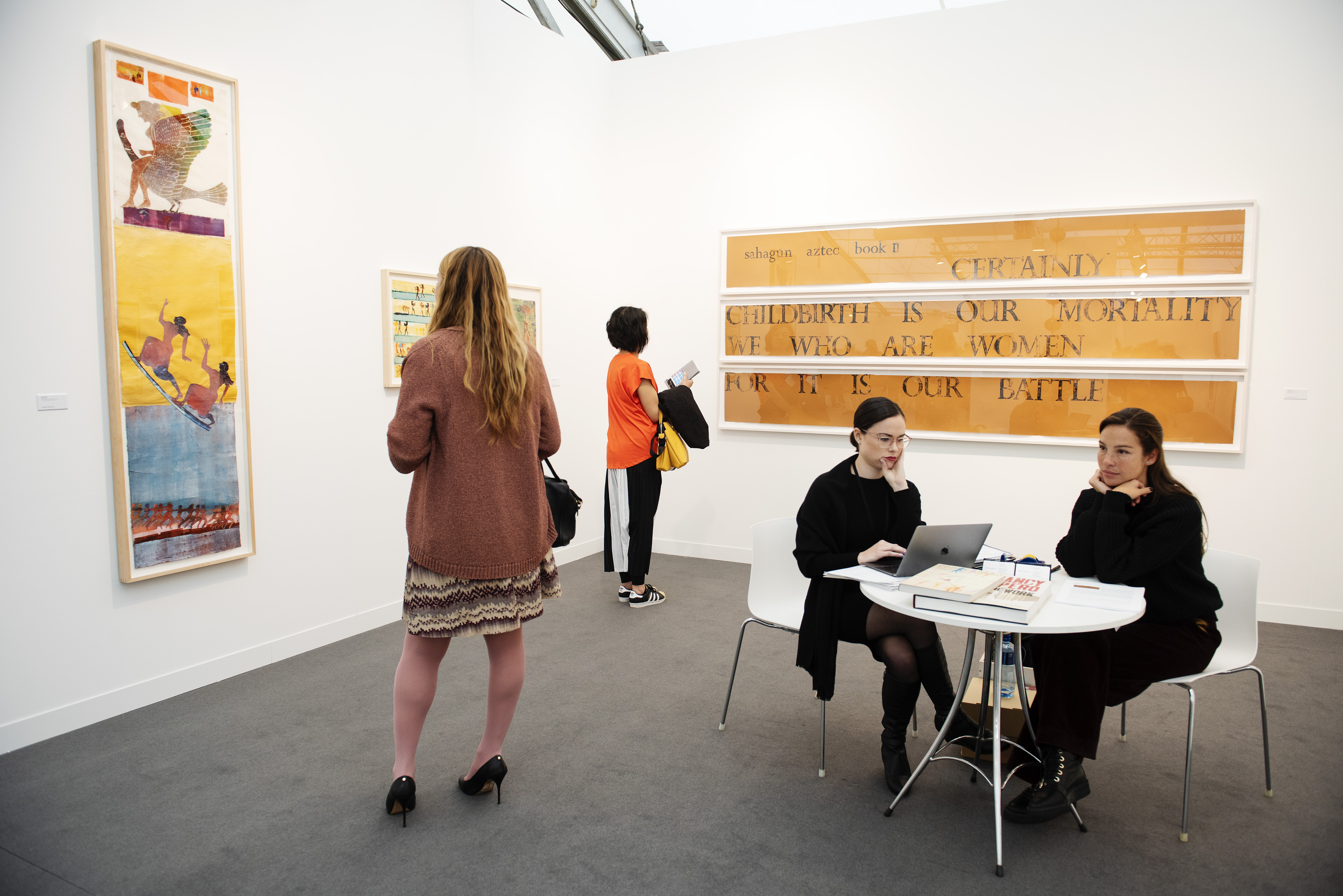 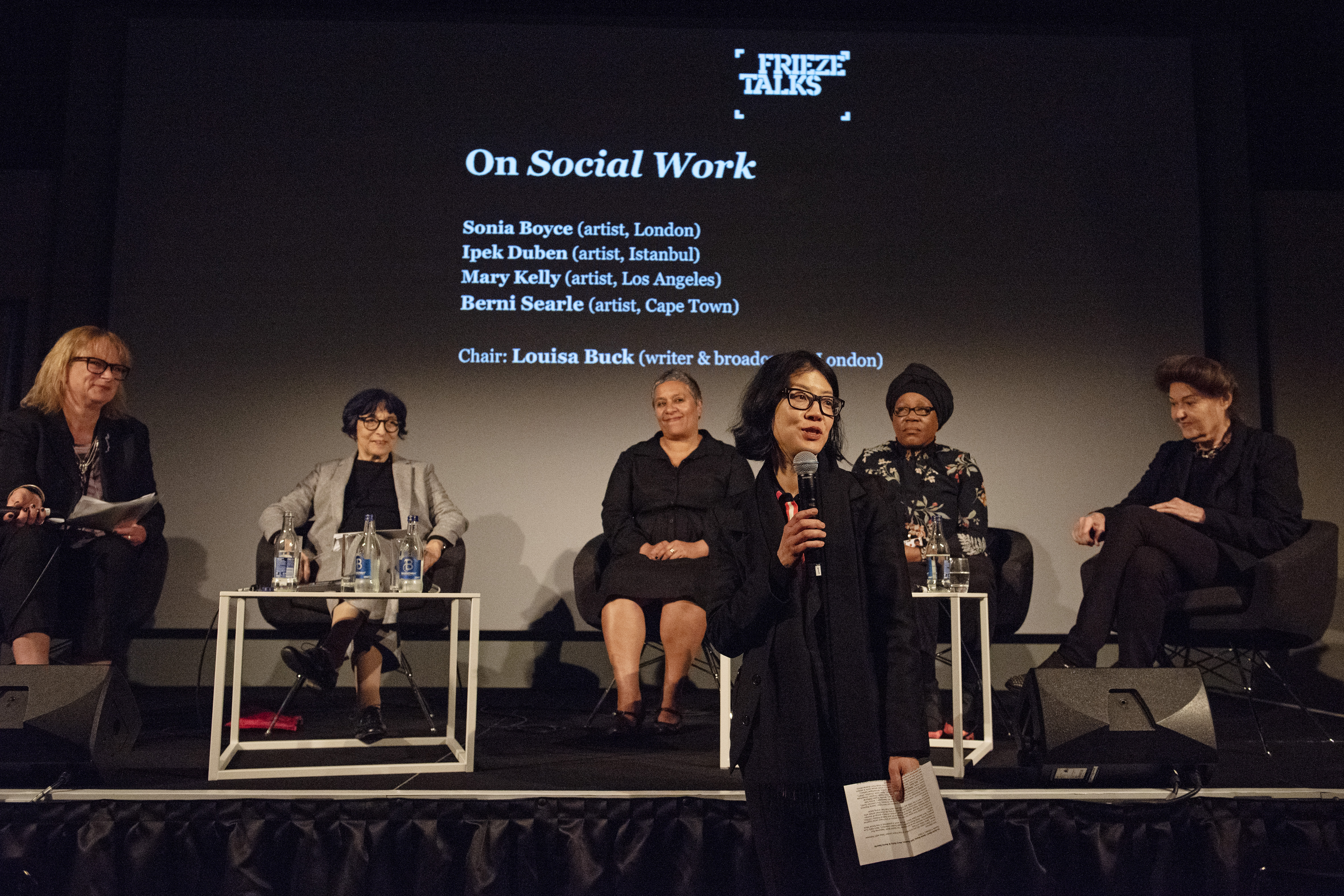 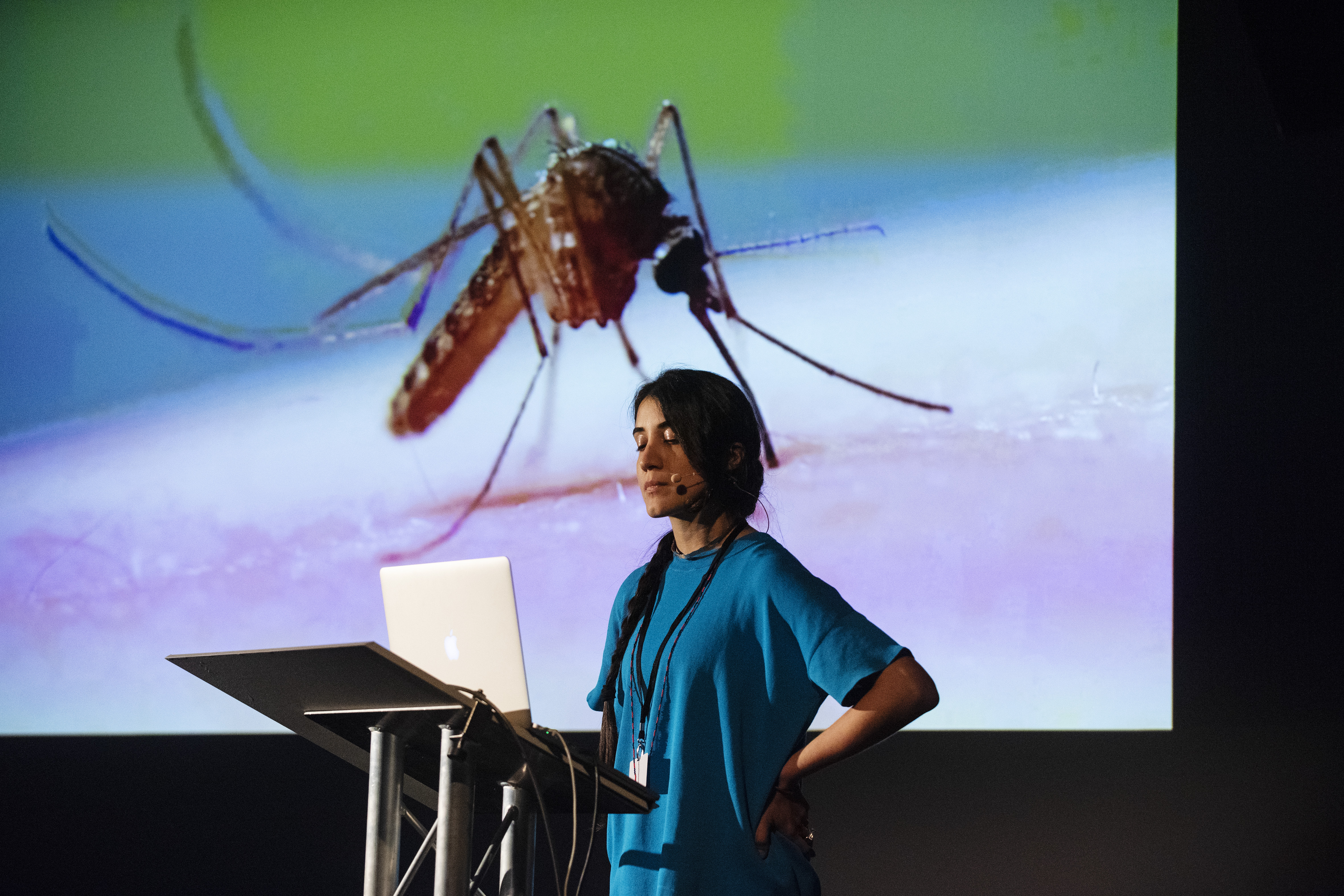 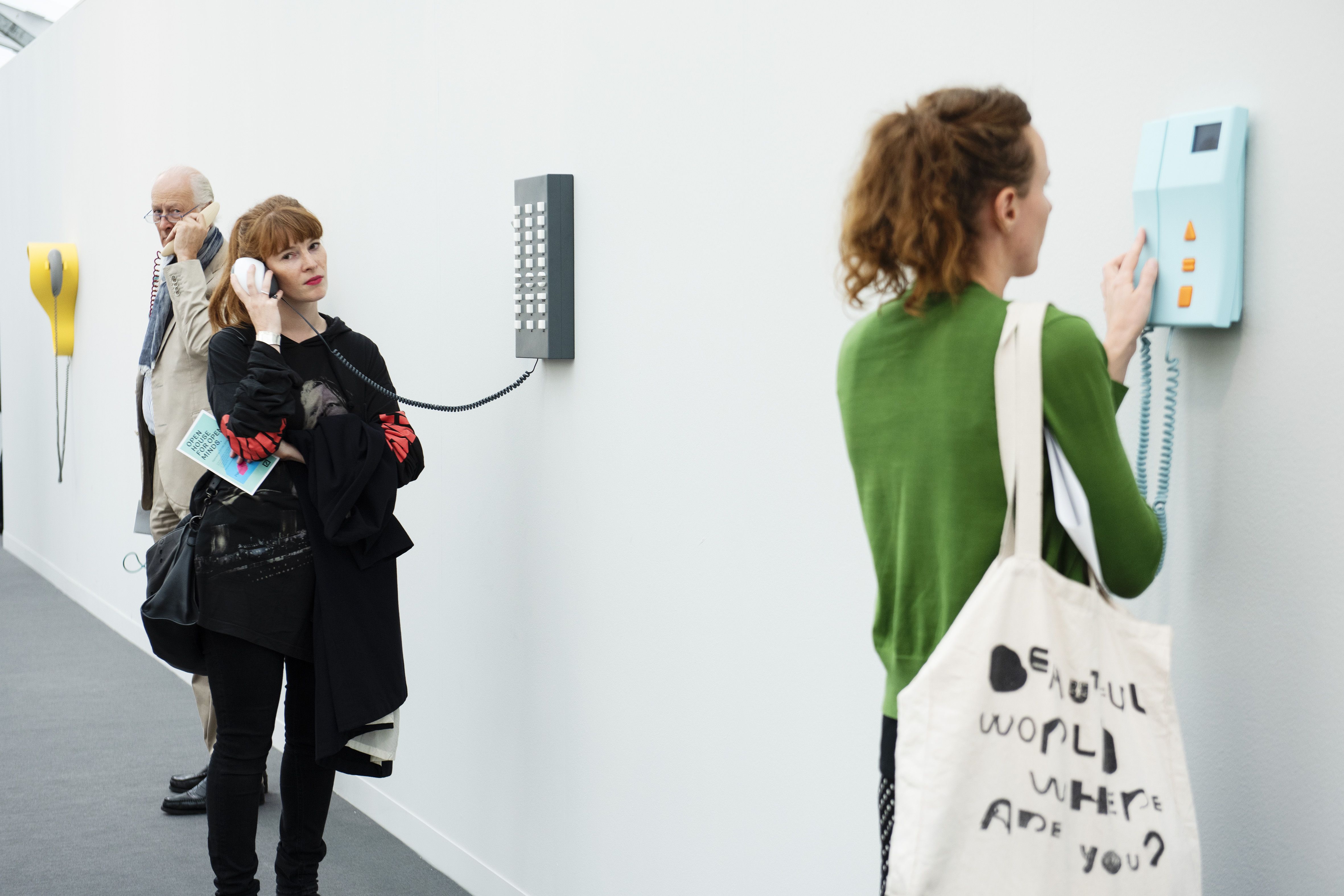 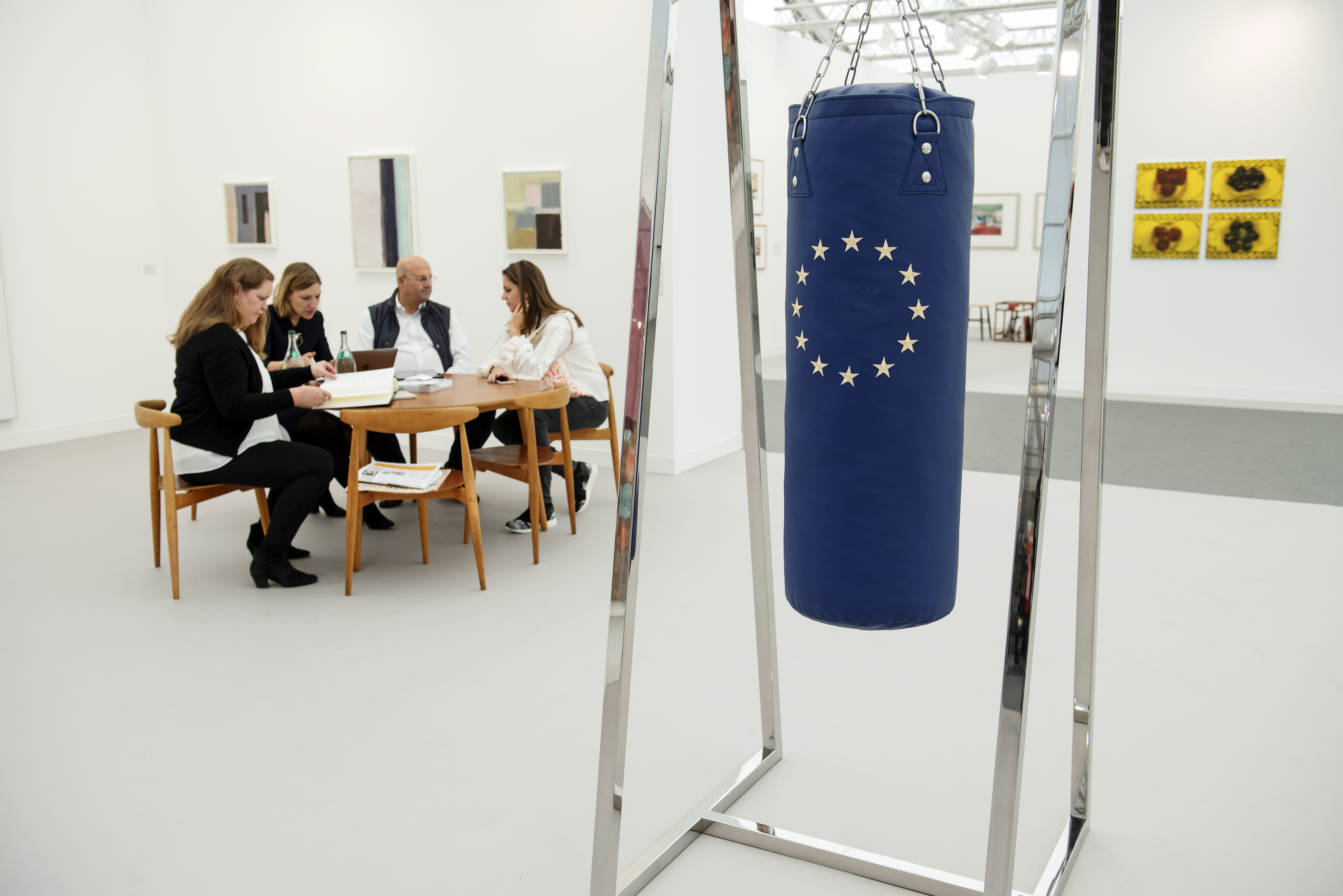 Chris Hayes visited Frieze Art Fair 2018, and is now reporting back on FOMO, cash being splashed and the international art world.

Nothing makes any sense here, but it all works efficiently to its own logic. I’m standing in Frieze Art Fair, a little confused, somewhat scared, and despite myself, flattered to just be here. Everyone is staring at their phones, or selling to rich people. You need six figures to be noticed.

Sometimes things are beautiful, but that is suspect in this place. Yet it feels too easy to make fun of things here as every hack writer loves to profess their outrage from the outside. Inside, much of the art does begin to blend, admittedly. There’s lumps and clumps of stuff mashed together. This is made from bronze, it’s many tonnes heavy. This domestic stuff is quite derivative, isn’t it? This thing is insta bait, but I love it. My notes don’t help much. What’s not present here is perhaps more informative. Very little is topical, grander themes of portraiture, landscape and material experimentation with a strong hang-up on abstraction dominate. That’s the problem with cramming art into a tight space. You’d think this compression of the art world would be great: it’s fast, easily accessible and digestible, an effective antidote to FOMO. You can see it all. It’s all right there – but it’s horrifying.

It’s easy to hate the art fair. All the money and privilege and excess is on show. It’s so much more dignified to have everything hidden away – like the patron’s name on the wall of the museum, or the project space that is quietly funded by the curator’s parents. The art fair is a place where old money mingles with new money, and the few of us who manage to wrangle a ticket somehow can peer in. It makes the circulation of capital in culture more visible than elsewhere. Ironically this is right before the works shuffle out of view, to someone’s home or worse yet, to be housed in a hidden warehouse far away from visitors, critics and any kind of tax liability.

Across the world, art fairs and biennials and other international parades of culture to lure in tourists and foreign investment are exploding. Not only in the old art world capitals, nor just in secondary cities, but tertiary cities are hosting their own. And within this explosion of quantity, there’s a race to be distinctive: there are artist-led art fairs; biennials just about drawing; events just for certain artists, methodologies, experiences and perspectives. But Frieze remains a steady centre. It’s birthed a magazine. The curated section, talks and performances add an additional edge of cool. It’s a leader, not a follower.

It’s interesting then that frieze magazine has called time on this globalised shift. Writing about the Berlin Biennial this year, Pablo Larios asked whether we need another fair-to-middling biennial. The curator, Gabi Ngcobo, argued in an interview that “we are not interested in countering this idea of biennalization.” Regardless, this is on people’s minds. But what links an art fair and a biennial? Isn’t one a kind of ugly business formality, and the other where the art really happens? What they have in common is the international scale of production and dissemination that is so integral to the functioning of the contemporary art world. The problem, as Larios argues, is the situation of “over-production and multiplication in the arts that seems increasingly at odds with the quality of what is exhibited.” These ‘diminishing returns’ are, realistically, what the scale and pace of the current art world lead to.

Many of the artists at major biennials and exhibitions, celebrated by critics and awards, have their work in the fair too – I went to the Berlin Biennial, and I encountered much the same artworks in Frieze. It’s hard to resist the gravitational pull. Both Camille Henrot and the Turner prize winner, Laure Prouvost, presented an installation and live work, respectively. While Marina Abramović, Sarah Lucas and Andreas Gursky showed in numerous booths throughout the fair. All art fairs demand, almost by law, some work which quite obviously plays with the increased competition for attention – previously these were very big or loud. In recent years it’s manifested as reflective work (selfie bait) or booths with a social media friendly balance of colour, lighting and text (Instagram bait). Urs Fischer’s Francesco 2017,  a large sculpture of a literally red-faced man on top of a fridge acting as a plinth, loomed over passersby, turning the camera gaze back onto visitors. It’s a shame that a kind of gimmick-cum-sculpturish-statement overshadowed what were some excellent iPad paintings on aluminum panels by the Swiss artist. A major Frieze-commissioned rave documentary by Jeremy Deller, Everybody in the Place: An Incomplete History of Britain 1984-1992, was screened on Saturday but will likely find its way to countless museum and gallery walls shortly.

The strongest statement made by Frieze to position itself as an active agent, a leader, a place where artists show and don’t just sell was through its curated section, focusing on women artists who operate on the edge of the market due to their political commitments, while simultaneously highlighting the gallerists that supported them. Titled Social Work, this featured eight artists: Faith Ringgold, Sonia Boyce, Tina Keane, Mary Kelly, Nancy Spero, Ipek Duben, Helen Chadwick and Berni Searle. It’s a curious and worthwhile gap to trace: between artists struggling to maintain political intents and artistic integrity, whilst also needing a career and all the practical compromises involved to continue.

But this sense of the outside and the outsiders is increasingly an art historical reference rather than contemporary reality. Some of the most advanced political art today is happening right at the heart of the art world’s institutions. Previous Turner Prize winners have embraced a social function for their practice, with recent nominees Forensic Architecture advancing the ‘evidentiary’ potential of artistic activity. And the recent Turbine Hall commission by Tania Bruguera is the first community engaged project in its 18 year history. Artists aren’t entirely complicit, but see their political action as navigating established organisations and infrastructures. The Design Museum in London is an example of this, holding the political exhibition From Hope to Nope which experienced a large withdrawal of works once the simultaneous hosting of an arms dealer’s reception came to public attention.

This collapse of the outsider is also evident in how artists engage with the fair itself. The curator of this year’s talks and artistic director of the Royal Academy of Arts, Tim Marlow, has noted a major shift in how artists interact with Frieze. “It is very interesting that there are certain artists who in the past wouldn’t touch an art fair with a bargepole,” he told the Guardian*, “there is never a problem asking an artist to get involved with the talks programme, or any form of curated projects.” The boundaries between the institutional and the commercial are blurred, Marlow argued. Examples of that might include the first year of an emerging artist prize, funded by a group of young collectors, in which the winner will be rewarded with an exhibition at Camden Arts Centre (a similar history to the establishment of the Turner Prize). Tate will once again get £150,000 to spend at the fair on works for its collection. With Arts Council funding being squeezed ever tighter, reduced significantly over recent years, how surprising is this increased push to the market?

This persistent commercial creep doesn’t end with these explicit relationships, crossovers and collaborations. The whole city gets caught up in its rhythm. October is when the slump of the summer is thoroughly broken, with exhibitions, talks, events and whatever kicking off in earnest, syncing with the fair. I remember standing in a small gallery during Frieze week ­ as far away from the moneyed excess as it could be – and wondering why they were taking part at all, at least in this tangential way. In the hope, perhaps, that a collector or a critic might stumble across the space and find their way inside. It makes sense for Sothebys and Banksy to revel in the spectacle. But the rest of us drift too. Perhaps, there is little enough of the outside left to resist. Perhaps there is no longer an alternative or, at least, less of a belief in it.

Walking through the expansive space of Frieze, hopping between booths and timing each section with the performances on the hour – a quick stop for a coffee, or to bump into an acquaintance – I marked each little square on my map. A circle for good. A cross for bad. Perhaps I’d jot down a name, or take a card. You stumble upon patterns this way: a lot of New York galleries named after a man were showing only men. And you can speculate on trends: I was very impressed by a number of smaller Scottish galleries. But what is the function for quality of artworks or critical reflection at Frieze? Do all roads lead to sales here? In 2016 when Brexit was a fresher threat, the director of Frieze Fairs, Victoria Siddall, argued they could weather the storm. If anything, the currency devaluation improved its value. But the resilience of Frieze extends beyond this, and arguably Siddall has been instrumental in this. She launched Frieze Masters and Frieze New York in 2012. The Frieze Academy organises courses and lectures too. As director she’s continued Frieze’s identity as more than just a place of business, demonstrating that critical acclaim and commerce can co-exist with prestige and excitement.

Brexit continues to be a slow, grinding reality for Britain and its European neighbours. Hard or soft, this art fair is showing little sign of slowing down. Immune from the surrounding political strife, Frieze like much of the arts is a highly stratified world, seeped in privilege, excess and inequality, while the rest of us peer in, and even identify with it. The seeming collapse between the insiders and outsiders comes at a cultural moment witnessing historic levels of wealth inequality, a globalised political system that steams on ahead as the disrupted lag behind. To curse the art fair for this would be to pretend that the market isn’t everywhere already – in the galleries, museums, the artists’ studios, the independent project spaces and even shaping the edges of our political imagination. People say the VIP tickets are the one thing money can’t buy at Frieze. I visited the fair, but maybe it doesn’t matter. It’s everywhere, now.