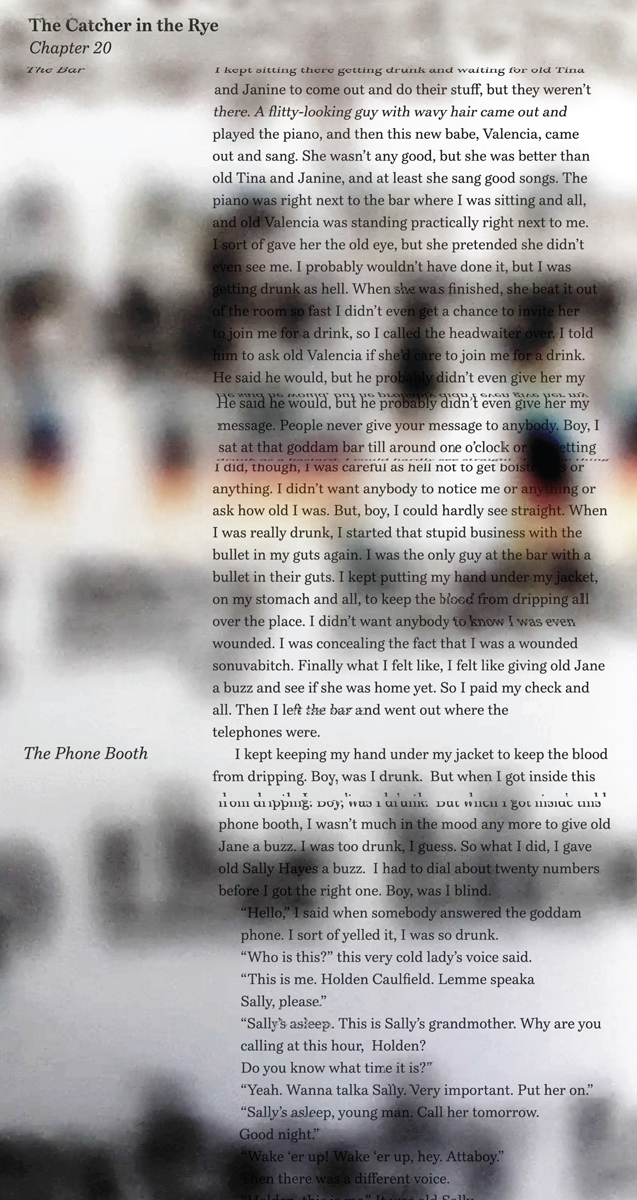 A brief is set by the International Society of Typographical Designers, on the theme of banned books, and a number of students choose to respond to this in a small section in Visual Communication Design on the top floor of the DIT Graduate show. Touch screen technology is adapted creatively here for literary purposes. There are prototypes for a new digital version of Nabakov’s Lolita (by Cindy O’Keeffe) recensoring in nature, with sentences which mutate as the reader touches the screen, making the reader uncomfortable, aware of the inappropriateness of the relationship within the book; a digital The Second Sex by Simone de Beauvoir, which was once on the Vatican’s list of banned books, updated by Aoibheann O’Sullivan for a contemporary audience with added hyperlinks, including current statistics and information about issues such as domestic violence and the gender pay gap; George Orwell’s 1984 (by Dylan Panetta) complete with interactive maps for an iPhone which has the user-reader moving quickly from place to place attempting to avoid the Thought Police who threaten to cover over aspects of the story – all literary prostheses or conceptual digital remixes.

However, the work that appeals to me the most in this series is a reworking of J.D. Salinger’s The Catcher in the Rye by Luke McLaughlin. An evocative adaptation of the original text, its distorting visuals echo the near mental breakdown of the ‘coming of age’ narrator Holden Caulfield, who has just been expelled from yet another school. The text, banned in some schools and libraries in the U.S. in the 1970s, turns cinematic here (J.D. Salinger also forbade the book’s transition into film). The text distorts, shifts, seemingly deleting portions of itself, constantly remaking itself, as a blurry tear/lens slowly falls down the page. Reader and narrator begin to merge in this immersive text, resembling also an interactive video game, like the eponymous game of the book’s title. Touching the screen not only alters text but also causes an audio track to play. Listened to on headphones, repetitious, designed, slowmo, fragments of text, give the piece the psychological feel of the inside of Holden’s tortured mind. Menacing typography, wild, glitchy, magical even, begins to darken and swirl before our eyes, a textual breakdown, as if the book itself is actually distorting in this translation.

I went down near the lagoon.

I dunked my head in it right up to my ears.

So I got the hell out of the park.

It was partly frozen and partly not frozen.

Blind spots of the narrator. Migraine. Dizziness. Fainting. Breakdown. This version returns me to the original text. When the reader touches the screen, the text distorts, mirroring Holden’s own sexual hang-ups. Perhaps it is the roommate to whom Holden gifts his already jamming typewriter on leaving school who is writing this interrupted text. Thrown out of school again, Holden is here thrown out of language or the text itself, which ceases to function correctly. The work on display is a prototype; the completed version is in progress. I imagine colour perhaps being used too in the final version: The green ink of Holden’s dead brother’s poetry, scribbled all over the baseball mitt, or the ubiquitous red hunting cap Holden wears almost throughout the duration of the novel, green and red leaking into the narrative typographic chaos. This text erupts in horror to present us with the contemporary significance of anger. Deconstructive, psychoanalytic, form mirrors content, text is symptom, reminding me of the bug typewriter in Naked Lunch and of Borges’ ‘Pierre Menard, Author of the Quixote’, a story about an attempt not just to translate or rewrite the original Don Quixote, but to actually recreate it as if writing it again for the first time.