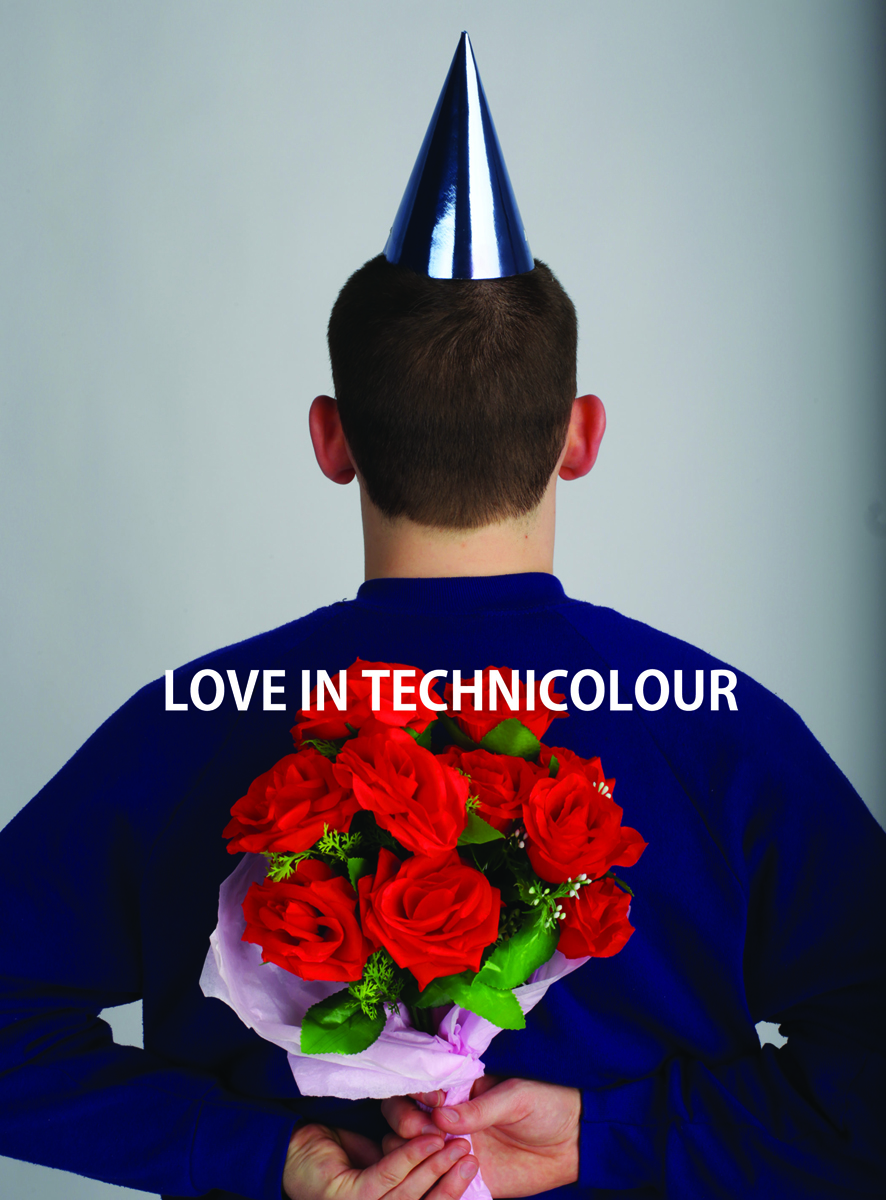 At the start of Kevin Smith’s short film, Love in Technicolour, the protagonist recounts how, while visiting an art gallery, his attention turned to something more stimulating than the artworks on display: his female companion.

As the ensuing relationship descends into the zero-hours contract of unilateral decoupling, the compulsions and corruptions of abortive courtship are tracked from obsessive infatuation to disillusion and wry resignation.

On the way to this resignation the protagonist, broken-hearted, beer in hand, traverses a pedestrian crossing, the sound signal’s woodpecker throb sounding and resounding as he crosses over from the bright lights of a shopping centre to a dimly-lit alleyway.

Alone in the alleyway a vestigial cardboard party hat is donned and the beer consumed in a forthright and prescient exposition of situational disengagement. Between resonating belches, the beers are downed in one and the cans flattened underfoot. Compacted spheres ejaculate the dregs, weeping frothy rays of runoff.

The body revolts and in a display worthy of Jackson Pollock regurgitated beer is spilled, dripped and dribbled, onto the concrete. As constructed dislocation the ritual of acquired insensitivity is tragicomic.

Following an unseen act of violence splashes of colour, a rosy inkblot bouquet, are spat into an antique sink. A grubby white pillow with sightless eyes and a smudged mouth sits propped up, incarcerated, beside the lovelorn youth, who has an aerosol can from which intermittent bursts of mist are released, highlighting the dust in a shaft of sunlight. Flex tail wagging, electric hair-clippers judder ominously across gnarled floorboards.

In the opening sequence of Stanley Kubrick’s 1987 film, Full Metal Jacket, in preparation for a collective psychological decoupling, similarly plugged-in devices eat their way through lush follicular pastures. The inverted shades-of-grey brushstrokes of Elvis Presley’s 1958 army buzz-cut are also brought to mind by Love in Technicolour’s graduation ceremony: a process of voluntary erasure in which the febrile grasslands of youth are shorn to a bundle of battle-ready bristles.

The art galleries of the world are haunted by such absences and erasures. In their denuded interiors lost ecstasies and out-of-body adorations are searched for and sought out. The wounds of love are reopened. Gates are ripped from their hinges. Pillars pulled down. At the millstones of art we grind ourselves into existence.

Crowned with an upended cone, his head a tumescent scoop dipped in murky hundreds and thousands, our hero draws a semicircle, a jocular ruby-red U-bend, on a bathroom mirror using the stock-in-trade of serviceable sensuality – a stick of lipstick.

Like a hand receiving a graduation scroll he manoeuvres his mouth into position, behind this seductive veneer.