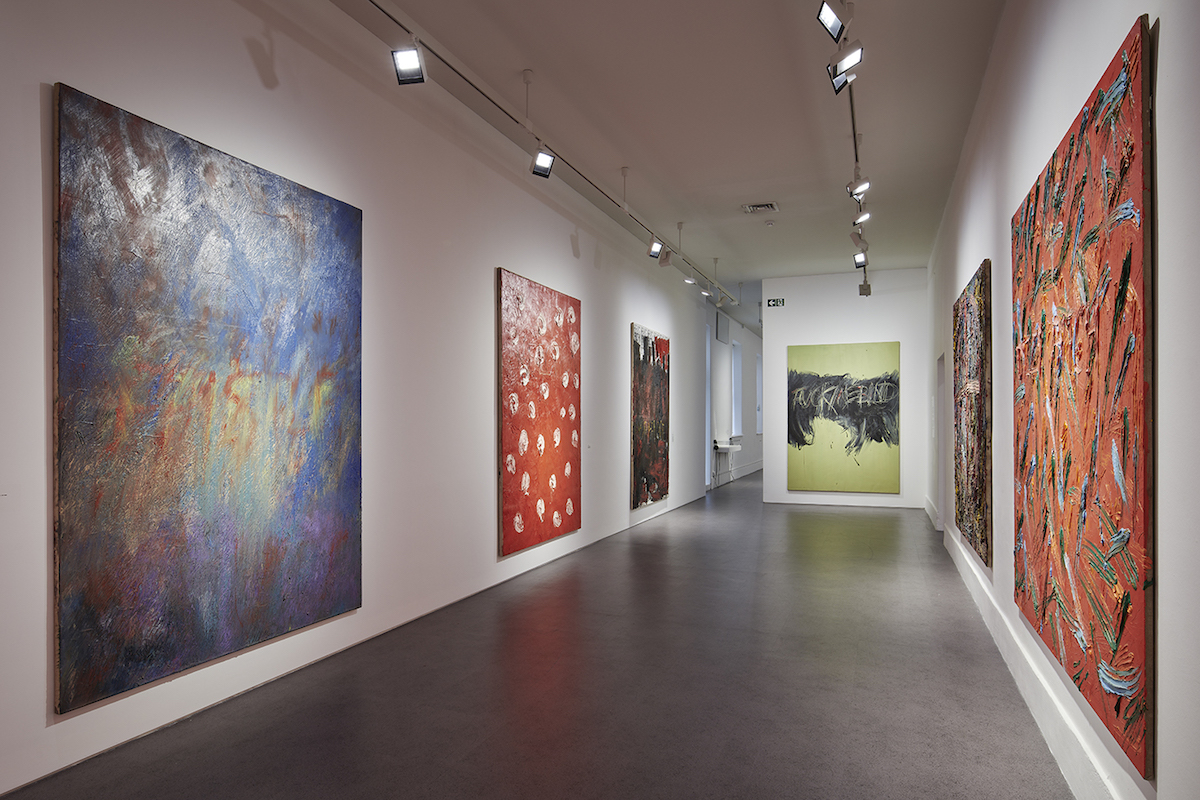 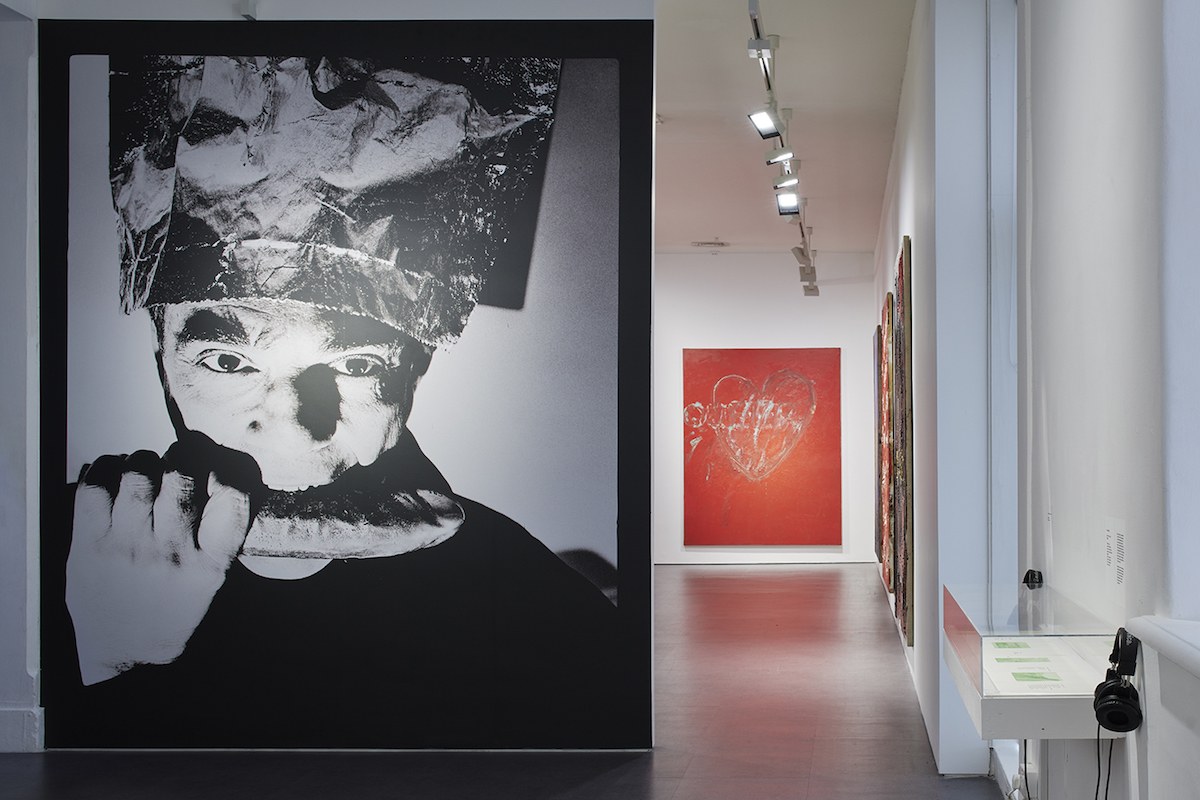 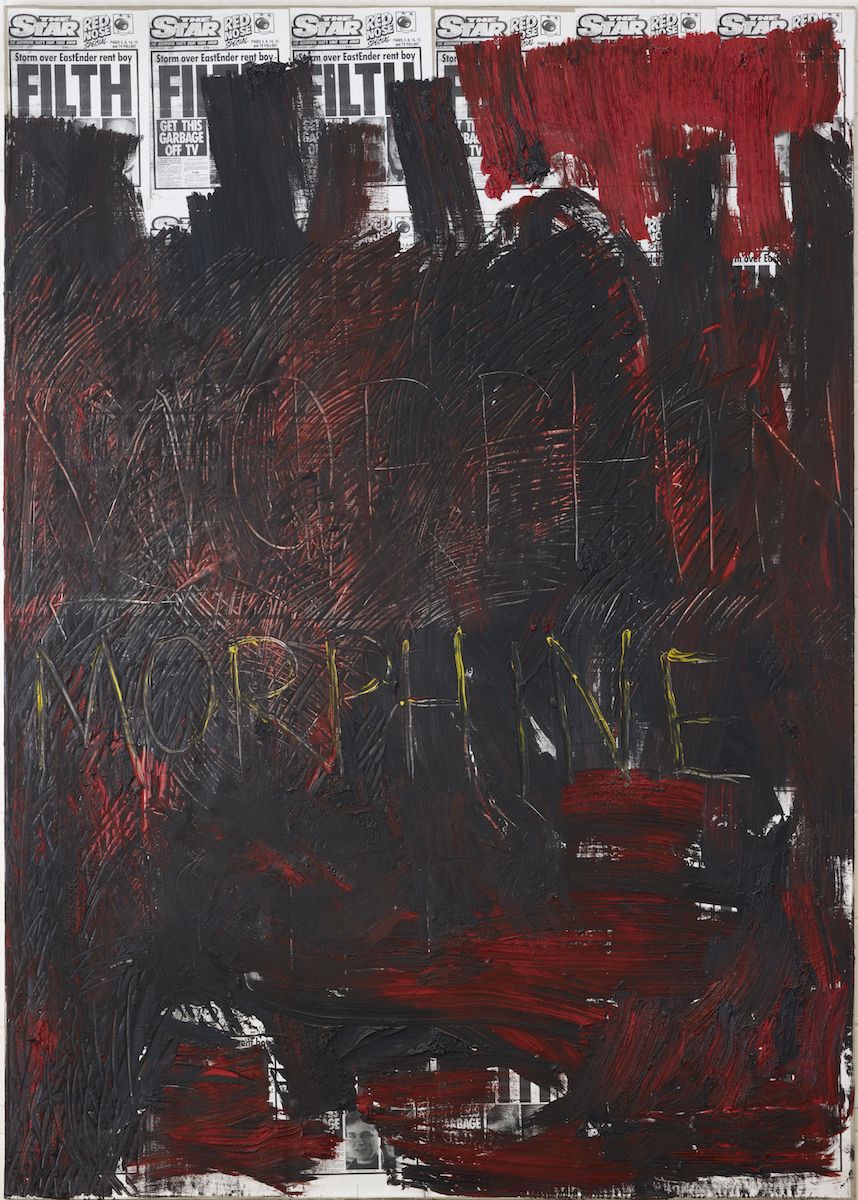 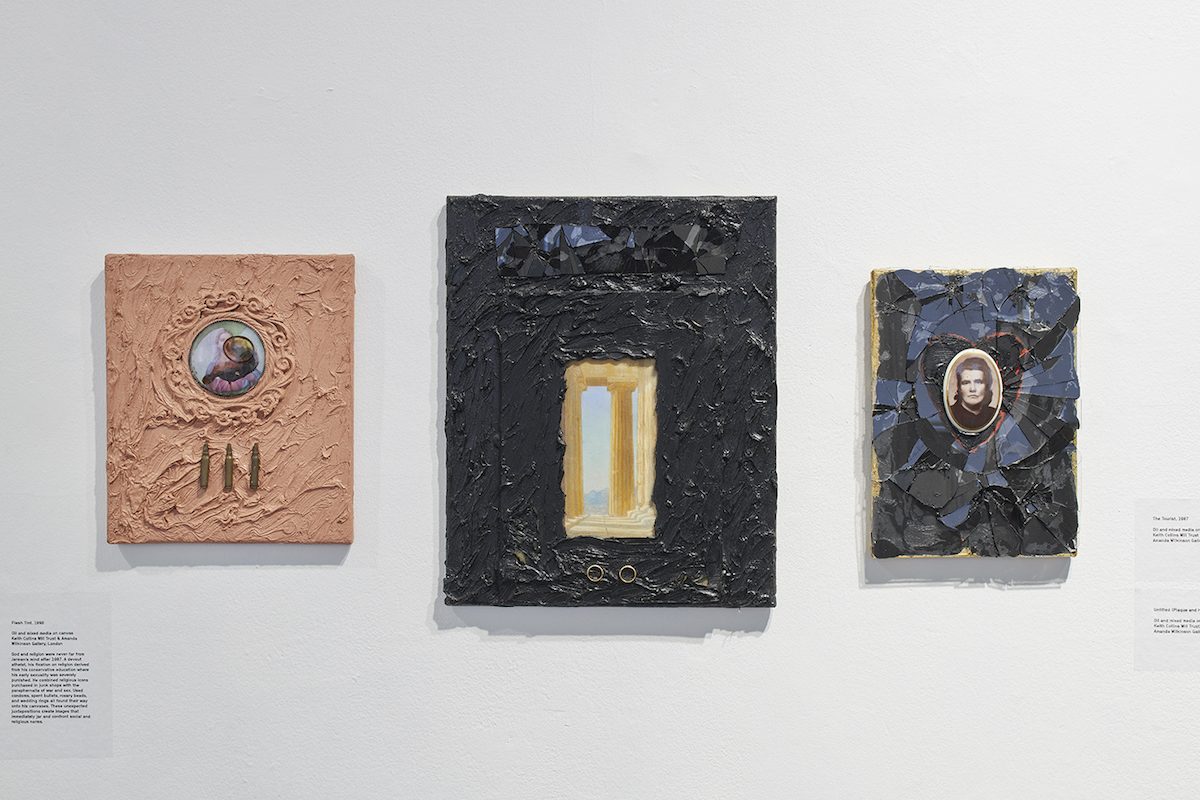 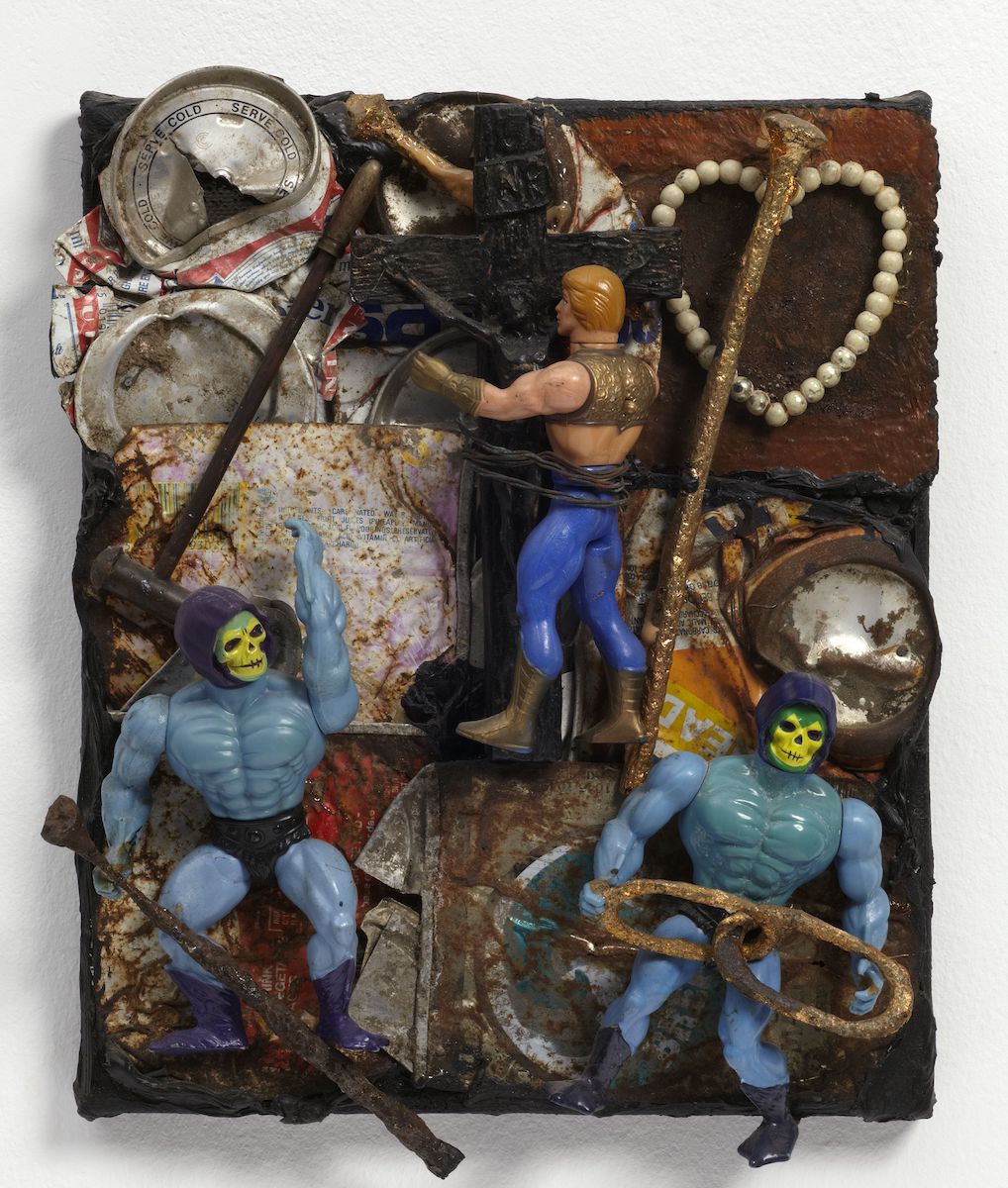 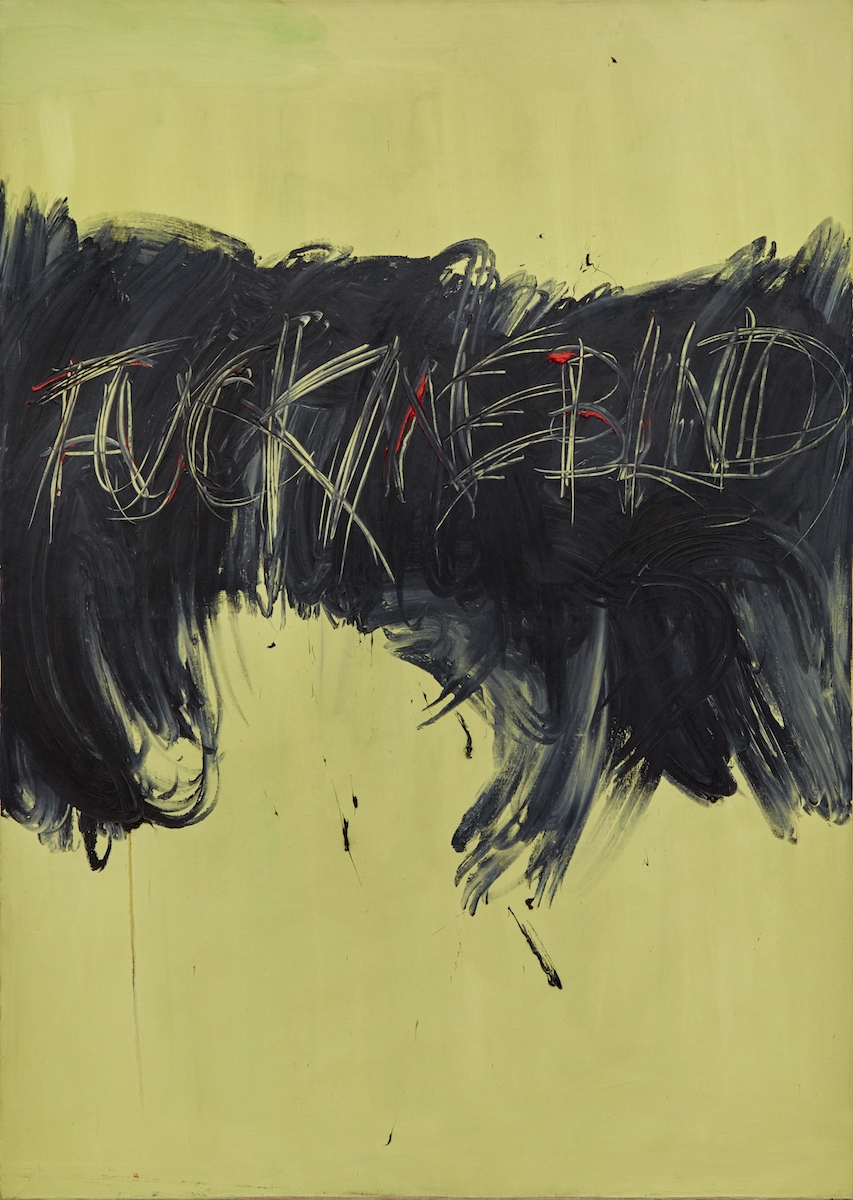 In Modern Nature, a collection of journal entries written after he was diagnosed with HIV, Derek Jarman mentions reading a biography of Eric Gill. He notes with seeming approval how Gill “although eccentric, even silly, attempted to fuse his art and life, throwing his body into the struggle”. Jarman then embarks on a mini reverie, celebrating a lineage of nonconformist, visionary artists:

Whitman, Carpenter, Gill and, nearer in time, Ian Hamilton Finlay and John Berger seem all to have set off on that old straight track, a road pioneered by Mr. and Mrs. William Blake playing Adam and Eve nude in their London garden. Blake and William Morris… all of them look backward over their shoulders – to a Paradise on earth. And all of them at odds with the world around them.

Visiting PROTEST!, a retrospective of Jarman’s work, it’s clear to see why he singled out these particular artists: for their utopian vision, their practical skills and the desire to commingle their life and art. This dialogue with artists from the past recurs throughout the exhibition and can be seen in pieces such as Spring- from Poussin’s Inspiration of a Poet, a painting from the mid-’60s when Jarman was a student at the Slade School of Art. It feels like an apprentice work in the literal sense of the term, as if Jarman was reverse engineering Poussin’s original in order to see how it was accomplished. Although formally different to Jarman’s later work, it does contain, in inchoate form, a sensuality and interest in the classical world which would manifest throughout his career.

While best known as a film director, Jarman was a remarkably prolific and protean artist who experimented with a variety of different mediums throughout his life. PROTEST! goes some way towards capturing his disparate creative elements: we encounter Jarman the designer of elaborate film sets and costumes, Jarman the Super 8mm filmmaker, Jarman the passionate gardener. Throughout the exhibition we find someone who pursued the full expression of his personality, unconcerned with reconciling its different facets. For Jarman there was little distinction between his endeavors as a gardener, artist or activist.

Along with Jarman’s artworks there is also an impressive arrangement of personal objects on display in PROTEST! which help illuminate his questing intelligence. Among the most revealing of these is a judicious selection of works from his personal library, which include William Gass’ treatise On Being Blue, Allen Ginsberg’s Howl and an Elizabethan herbal guide. One book in particular caught my eye: a copy of William Blake’s The Marriage of Heaven and Hell which contains an imaginary exhortation by the prophet Isaiah that could have been a creative creed for Jarman himself: “the voice of honest indignation is the voice of God, I cared not for consequences but wrote”.

Continuing his conversation with the past masters, Jarman created a series of ‘Black Paintings’, which were influenced by his research on a film about Caravaggio. These are anarchic and moody works of oil on canvas, which show Jarman experimenting with chiaroscuro techniques and revolve around his customary preoccupations of sexuality (Male Nude with Erect Penis) and Christianity (Irresistible Grace). Caravaggio was subsequently released in 1986, the same year Jarman was diagnosed with HIV. Shortly afterwards he purchased Prospect Cottage in the bleak surrounds of Dungeness, Kent, and started to create smaller works using found objects. These canvasses, which resemble a post-apocalyptic version of Joseph Cornell’s boxes, were often covered in pitch black tar and affixed with various items attached such as smashed glass, bullet shell casings or Christian iconography like relics from a subterranean sect. Perhaps my favourite was INRI (1988) which recreates the Crucifixion using a He-Man action figure in the place of Christ and a pair of Skeletors standing in for Roman soldiers.

Black becomes a more prominent colour as the exhibition progresses, giving the impression of an encroaching darkness as Jarman’s sight began to fade. Some of the most striking works in the exhibition are from this stage at end of his life, including his ‘Slogan Paintings’, which are a dark riposte to the homophobic British tabloid press. Commissioned by the Manchester Art Gallery, they consist of large canvases, chaotically smeared with oil paint and phrases such as ‘Fuck Me Blind’ scratched into them. These ‘Slogan Paintings’ are overwhelming, but also suggests Jarman laughing through the darkness. In the later works there’s no sense of self- pity or sadness at his condition, just dark humour and honest indignation.

Contained within the word ‘protest’ is the Latin verb testari which meant “to bear witness” and from which we also derive the word ‘testament’. Jarman’s work was a testament to the times he lived through and, 25 years later, seem as urgent as ever.