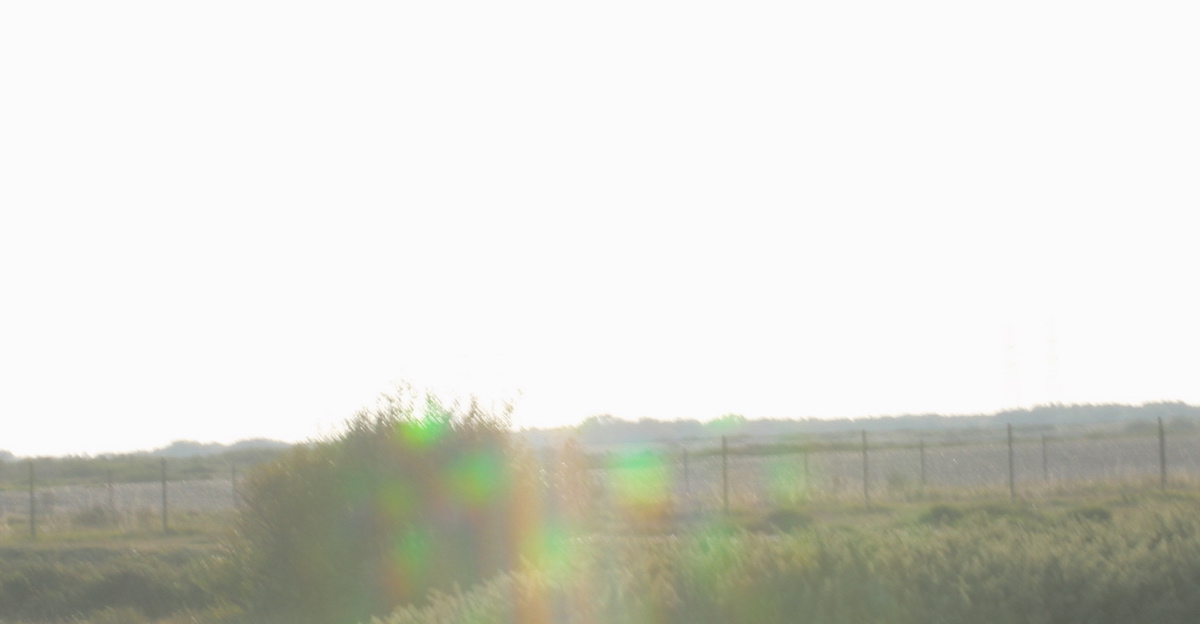 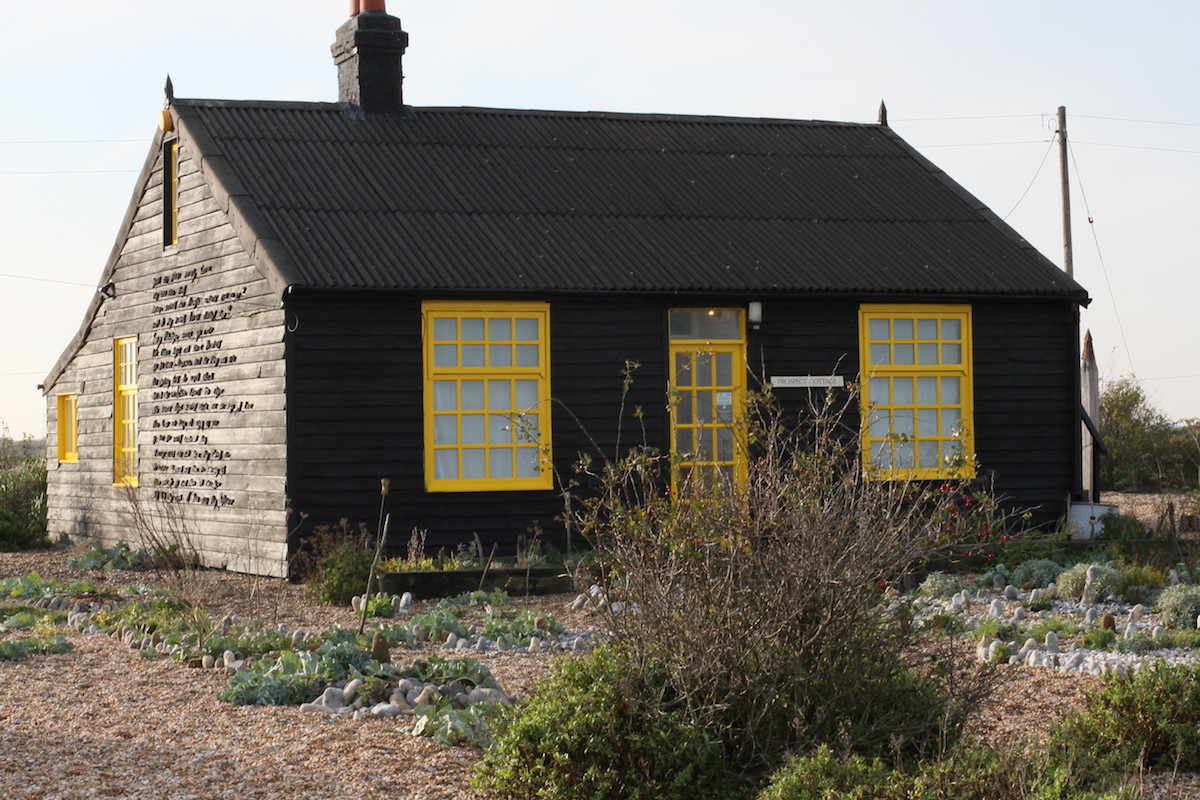 View of Derek Jarman\'s house. Image courtesy of the writer. 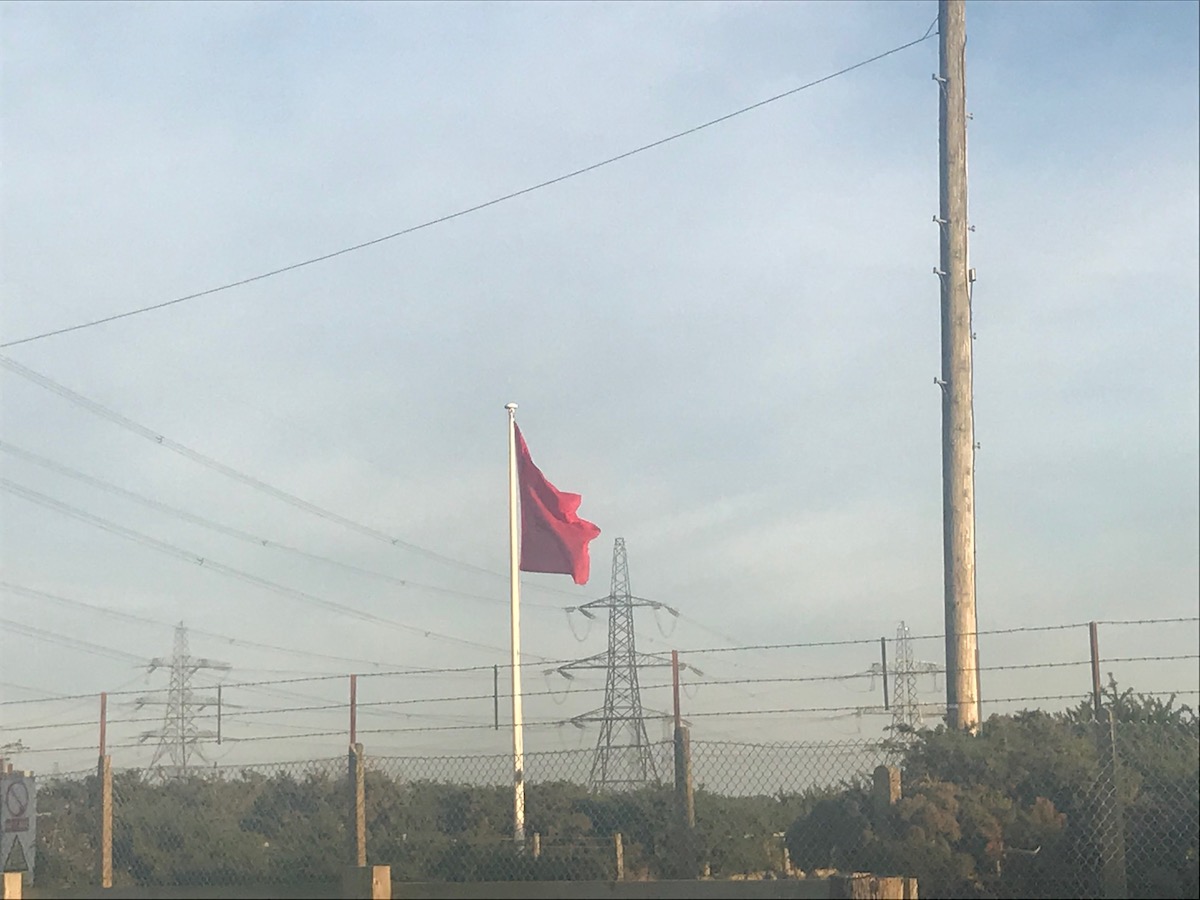 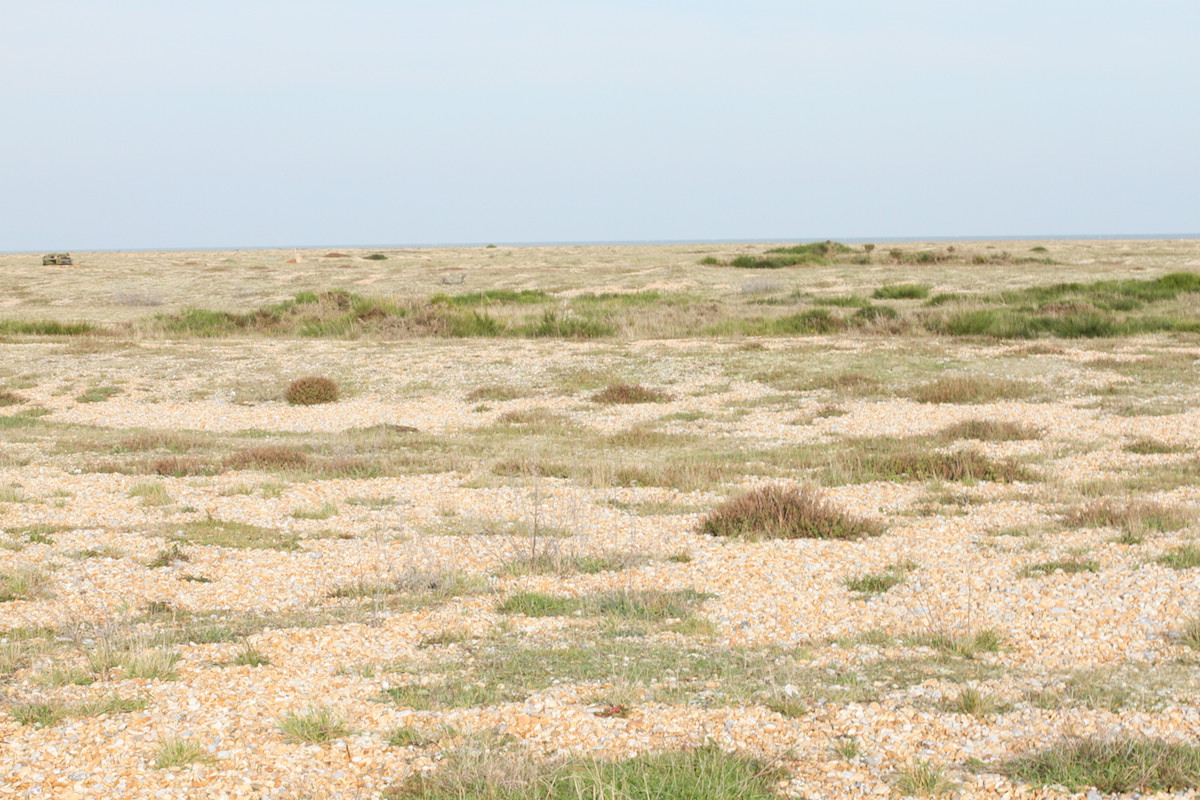 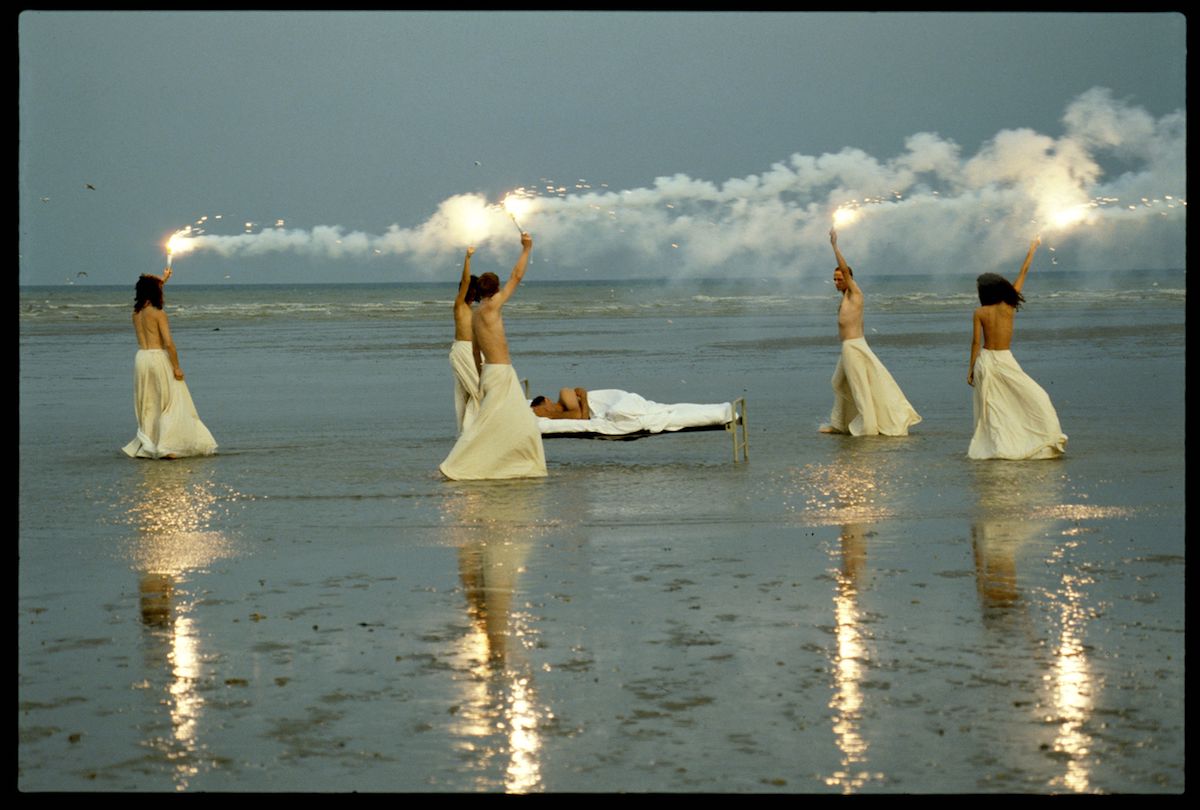 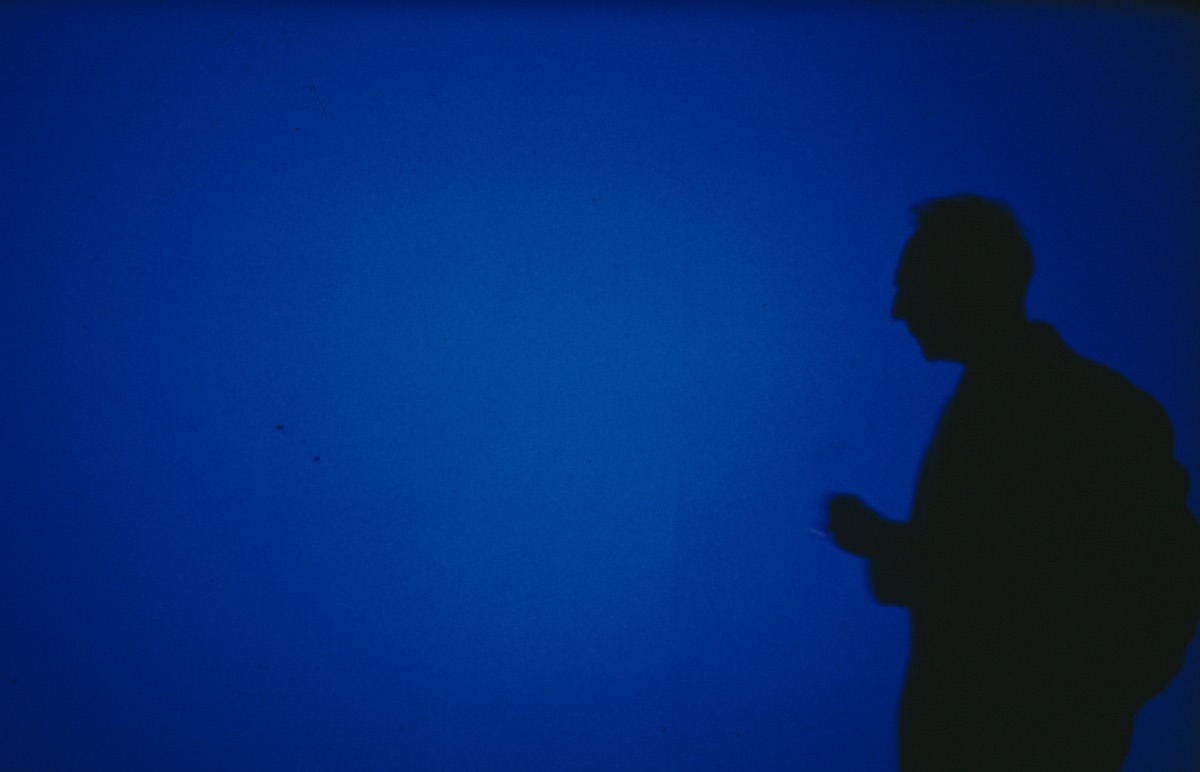 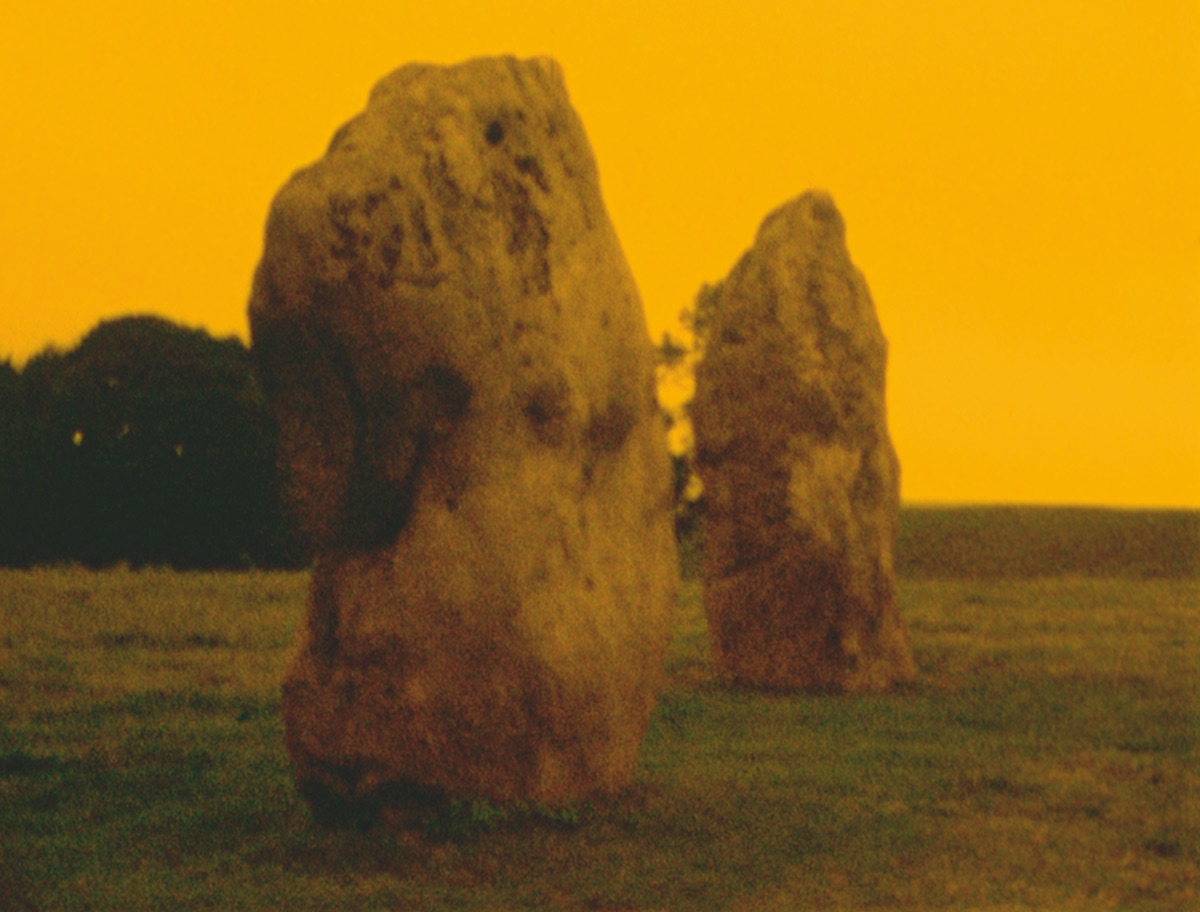 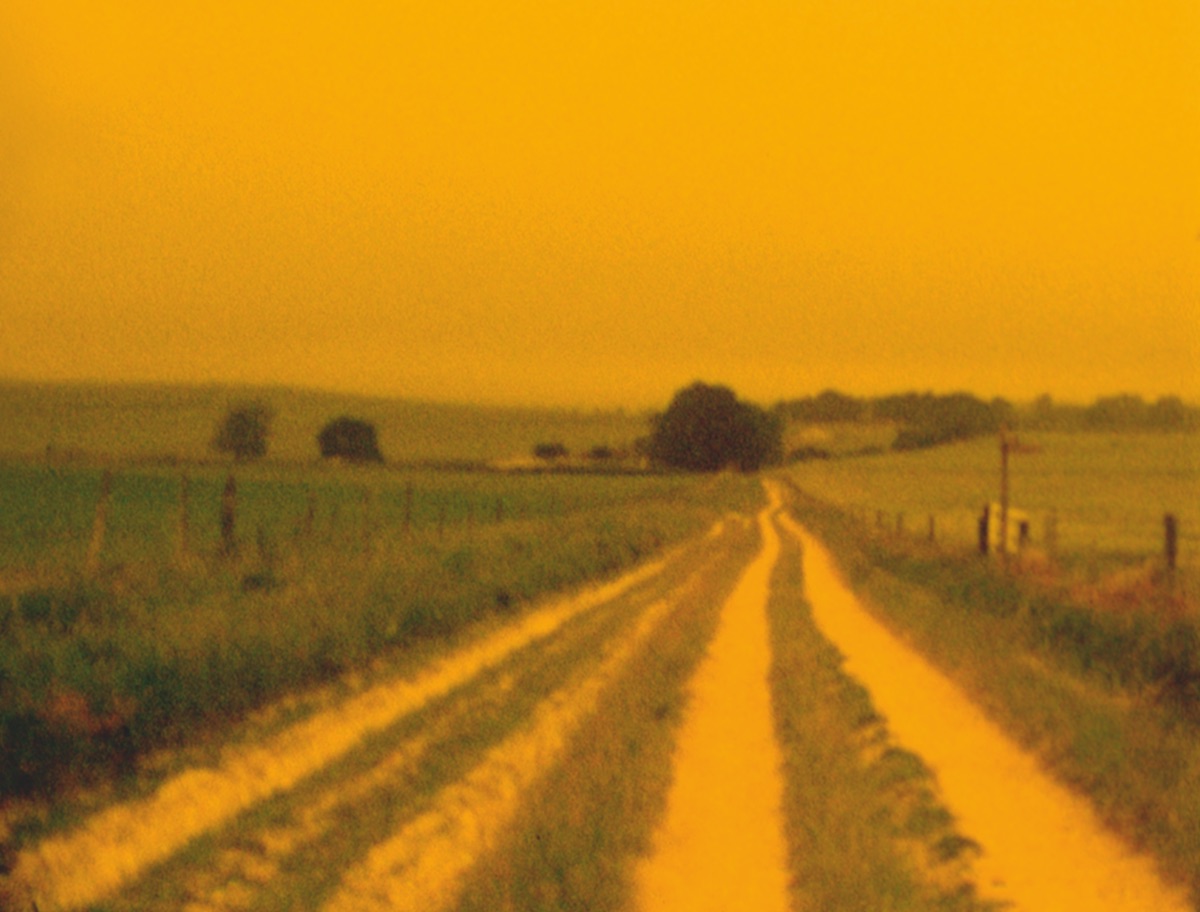 The earth is dying and we do not notice it.

Magnox: You received ‘shine’, 0.56 millisieverts to be precise, in the shadow of the nuclear power station at Dungeness, accounting for your saintly glow. A postmodern alchemy on a large scale. Fission.

One day as autumn gives way to winter and the roads are treacherous, I visit Derek Jarman’s former house and garden. The landscape changes about fifteen minutes before I arrive. Suddenly, it is as if we are not in England anymore. The villages, smoking chimneys and old windmills, undulating roads, green, little England, all disappear and give way to a flat plain, a bleached out landscape, pylons of the nuclear reactor stretching to the horizon, and barbed wire fencing off miles and miles of land, large red flags billowing. Further on, the acoustic mirrors at Dungeness, military, concrete surveillance ears of the past. It is as if we have left England and entered an imaginary state, a landscape of the mind; the lunar, atomic, post apocalyptic landscape of The Garden (1990). A revolutionary zone, reminiscent too of the fenced-off Soviet-flagged zone in Dorset, at the end of Jubilee (1978), which bans “blacks, homosexuals and Jews”. His former house, immaculately kept, the garden, few flowers now, stone, an old boat.

Red flags of a climate emergency. Red final painting Queer in the exhibition.

NHS told to give out £5,000-a-year lifestyle drug to prevent HIV – as vital cataract surgery is rationed
WHAT A SKEWED SENSE OF VALUES The Daily Mail, 3 August 2016

The after-effect of an eye specialist’s light is sky blue. Blue (1993), a tunnel into the exhibition, is an after-image in every sense. It is the point of view of the Director, losing his sight, dying, his after-film. The empty blue screen, a door to death, bardo, soul, the heavenly blue light of the cinema screen beckoning. The voiceover at one point speaks of the road to the city of Aqua Vitae, protected by a Labyrinth, covered in crystals and mirrors. The mirrors magnify all your betrayals and drive you to madness, cause blindness. Are these the betraying mirrors whose light is shone at the viewer in The Art of Mirrors (1973) and Sulphur (1973)? The cultural, social, legal, religious, cinematic mirrors of betrayal, which instead of representing the queer subject or viewer in their mirrors, betrayed them. Or is it Narcissus, dancing in the middle of concentric circles of fire, a mesmerising burning statue head like the fall of an old civilisation, Morse code, a hypnotic trance, the music and rhythm. All the betrayals: The Thatcher Falklands paintings with black red blood knives; The Last of England (1986) painting has actual fragments of a broken human skull; tar pictures; ancient coins; broken glass; pills and medical accoutrements. The making of these paintings appears as a scene in the homonymous film The Last of England (1987). The tar black paintings are a kind of obsidian mirror, like the one owned by historical alchemist John Dee in Jubilee (1978), who summoned angels on its dark surface.

BAE SYSTEMS’ SPONSORSHIP OF PRIDE HAS TO END. THE LGBT+ COMMUNITY MUST NOT BE COMPLICIT IN WAR AND DEATH The Independent , 24 June 2019

He painted some of his last paintings with his hands while dying, directed others as if films. Abstract like Blue (1993), expressionist. The marks of a dying man, dying of AIDS publicly, in 1994, breaking taboos by coming out as HIV positive, the first public figure to do so in the UK, and a year before the pills became available which changed the whole nature of the disease to a chronic one, the pain and fury evident in the marks, like someone trying to escape, gripping on with nails scratching across the canvas as if a floor or wall. Together with The Garden (1990) playing in the next room, with its religious/anti-religious operatic grandeur, it is almost too much, too raw. Lost paintings. Pain of loss, of friends, lovers, Jarman himself. And the lost paintings too, returned, and shown here, and perhaps there is resolution in that.

Tabloid newspapers underneath the paint. Painting over homophobic headlines.

There is the sense of history in much of Jarman’s work, from the deliberately anachronistic, experimental dramas Sebastiane (1976), Caravaggio (1986) Wittgenstein (1993), to the Super 8 film of standing stones of A Journey to Avebury (1971), to the pyramids in the grid paintings (Structuralist though he rebelled against this movement in film), the layered, archaeological Garden of Luxor (1972), and the paintings which look like broken statues from the fall of one civilisation or another. His work is time travel.

While the feature films are period dramas of a sort, with the Super 8 films it is possible to forget their progenitors – the New York experimental film scene of the 1960s and early 70s, Kenneth Anger, Pasolini. Instead cultivate amnesia and imagine them as having been made centuries ago, imagine the kinds of cinema that would have been made by earlier civilisations, different cultures. As if this were another undiscovered beginning of cinema prior to and contradicting our received knowledge. An alternative film history, as if film itself had begun at another time, and these were the first colour films of that time’s experimentation. Jarman based some of his Super 8 films on Jung’s Alchemical Studies and the Seven Sermons to the Dead. Jung did not reveal his authorship when he published it in 1916 but instead attributed his Seven Sermons to the Dead to Basilides of Alexandria, who lived circa 100 AD.

Pseudepigraphically, Derek Jarman is William Blake creating his Super 8s, superimposing, refilming, degrading, softening and then rediscovering them, as if pulled from the earth, from history itself. Complete with anachronisms like Leonardo’s diary, helicopter flying through its pages. Links form between paintings, films, costumes, poems and his garden at Dungeness, when viewing the exhibition, especially as a number of the feature films are screened daily. Everything sparks together in exuberant creativity, and motifs and symbols begin to repeat and make their presence known. The egg, the skull, the stone head, the mirror. The pyramids in the early paintings repeat in The Garden of Luxor (1972), the black tar and oil paintings take on the resonances of The Garden (1990), shown beside them, in which a modern Pontius Pilate smears the two gay men with thick black treacle and feathers from the stuffing of his jacket, creating another time-based black painting, a sadistic painting on the men. Or the blood on their white shirts as they are viciously whipped by a crowd of Santa Clauses, resembling the red painting, Queer (1992).

That the exhibition stems from a genuine deep regard and affection is everywhere evident, and makes for an emotionally powerful show which generates connections in the mind of the viewer. In the Shadow of the Sun (1981) isn’t here, the only omission that I felt lacking with its mythical, multiple refilmed layers, but it has been shown at the Void in Derry in a linked exhibition. IMMA’s gardens could have been used too, perhaps for an outdoor screening or performance, but there are many and varied additional components to the exhibition, including a symposium, a proposed screening of Blue (1993) with live orchestra at the National Concert Hall, and screenings of the feature films at the IFI. And there is a spiritual feeling from the show, whereby, even for the most ardent of admirers, he seems only to gain in stature. Jarman’s DIY aesthetic has never been so relevant in a time of precarity yet of high res and inexpensive cameras too. LGBTQ+ rights have significantly advanced since Jarman’s time, it is now about Marriage Equality, Trans rights, PrEP. However, as we emerge, tank-topped, into the new decade, we see the moving targets, and the zone in Jubilee is real in the self-declared LGBTQ+ free zones of Poland, or the concentration camps for gay men in Chechnya, or the close to seventy countries which still criminalise LGBTQ+ people worldwide, 34 of which currently use British colonial era laws to do so, and so it goes on.