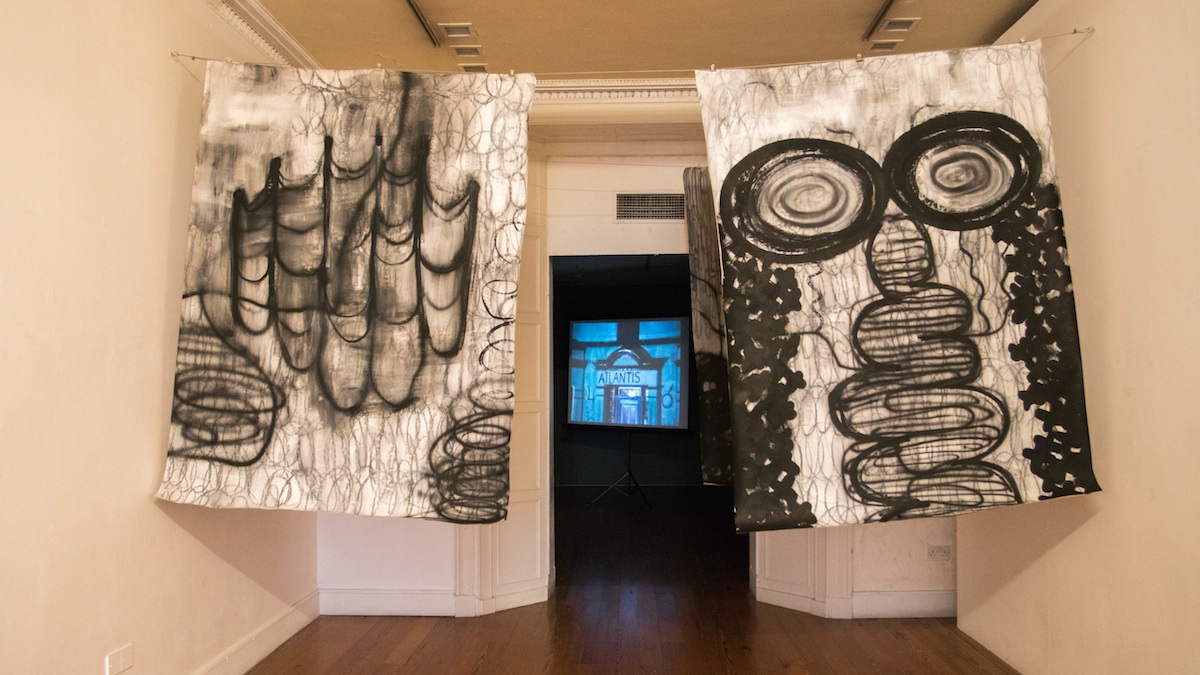 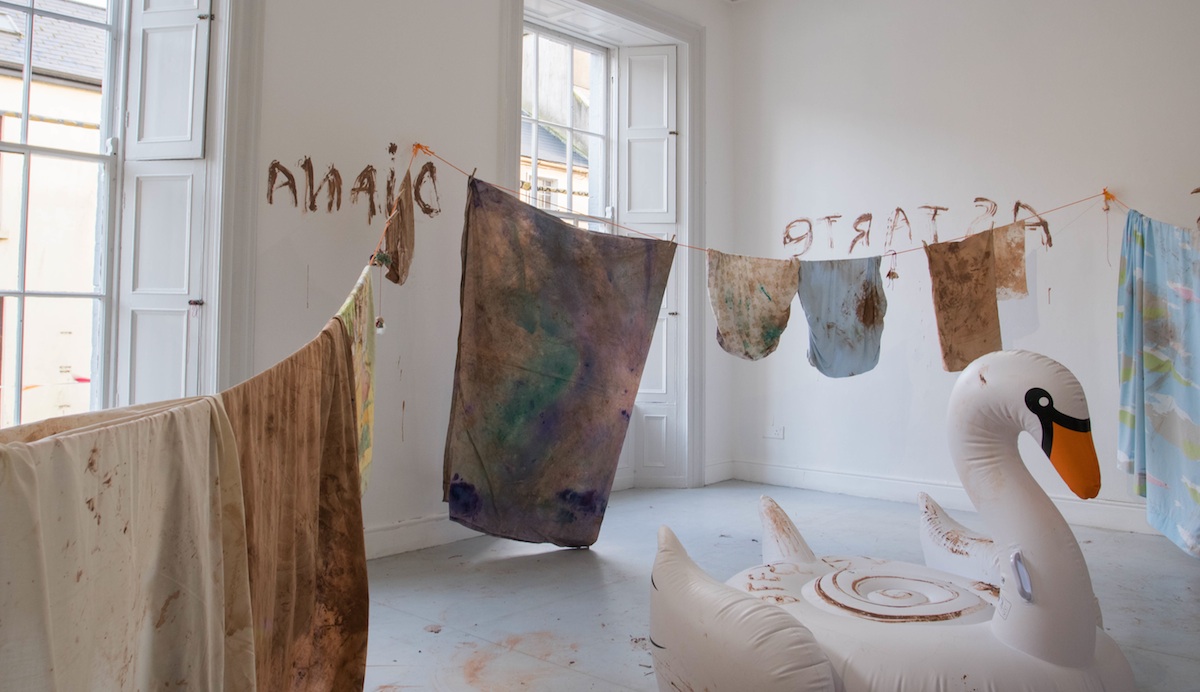 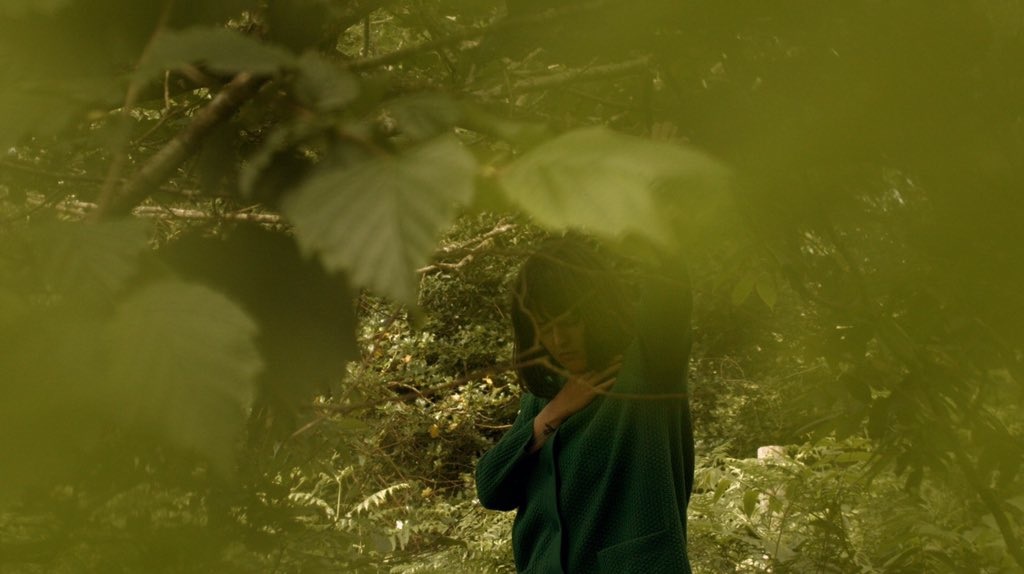 Still from Vicky Langan and Maximilian Le Cain Inside (2017), courtesy of the artists. 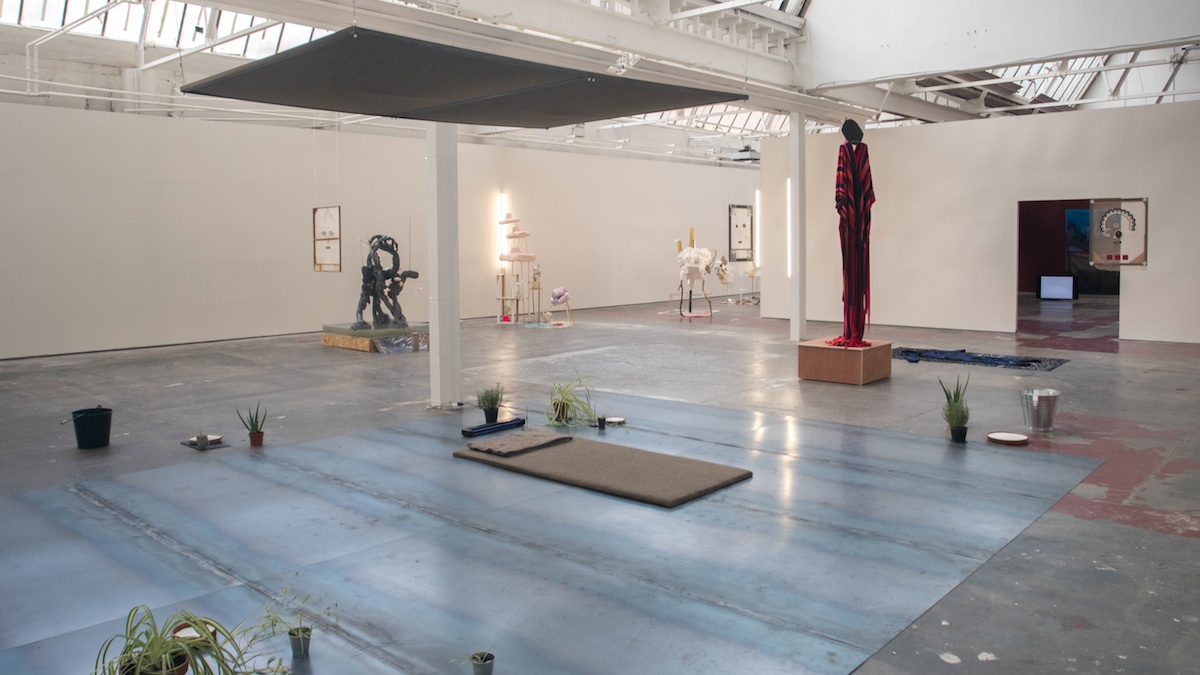 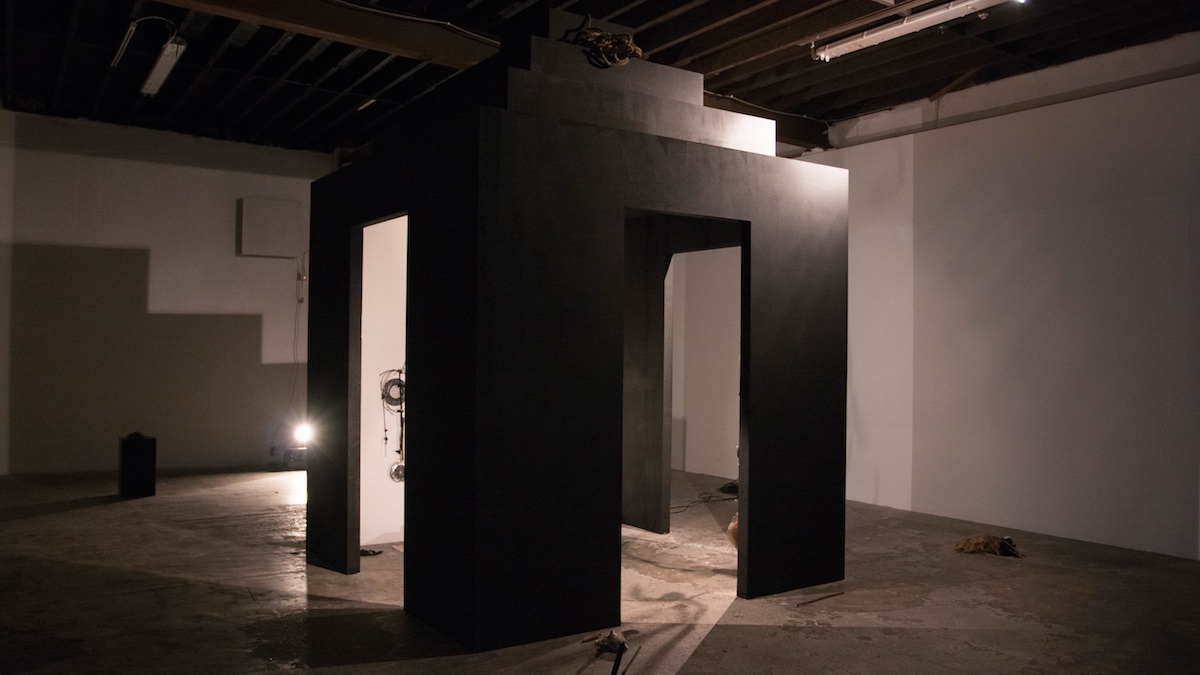 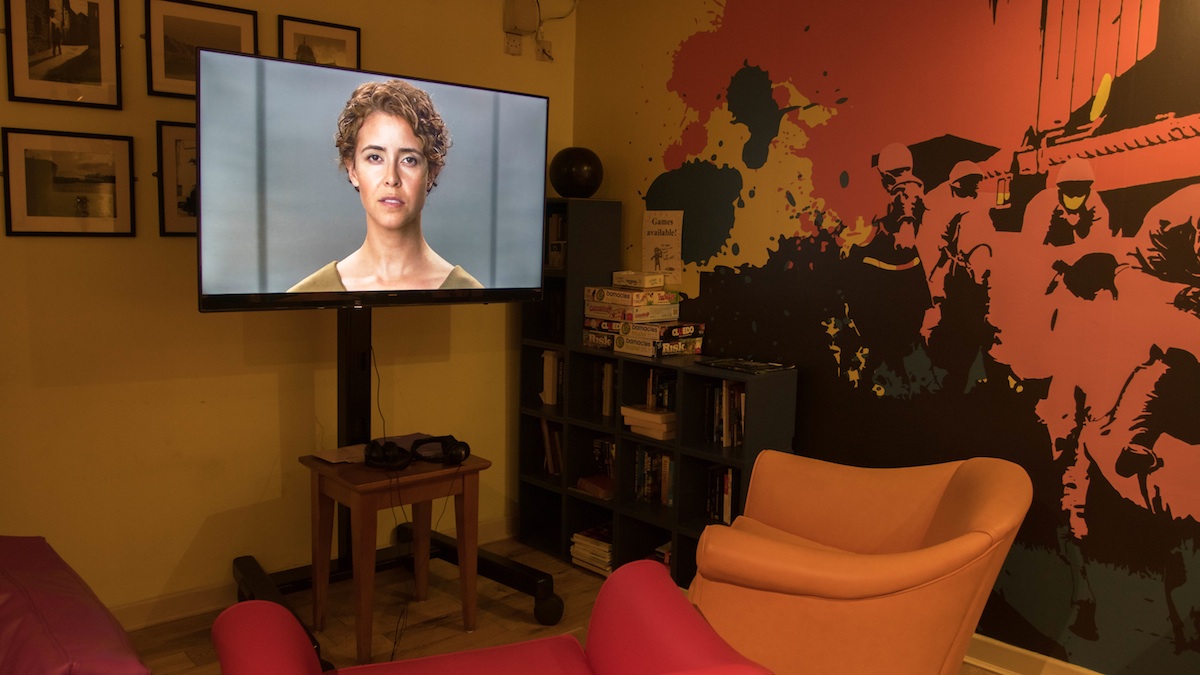 They Call Us The Screamers, TULCA Festival of Visual Art

On the TULCA festival’s website – ‘Mission & History / What we do’ – there is a slogan. Separated by vertical lines, three words are displayed in capital letters: PROVOKE | INSPIRE | EVOLVE

Raising this tri-partite structure vertically evokes the three floors of Galway Arts Centre and turns the words into a set of gift shop pie forks.

At the base of this phallic structure Bob Quinn’s 1979 film The Family provides an historical provocation, a snapshot of the Atlantis commune in Burtonport, Co Donegal, which was set up in opposition to the prevailing mores of the day, in particular the nuclear family, condemned for its inability to provide for the emotional and spiritual needs of its constituent members.

Adjacent to the room in which The Family – once deemed too disturbing for pre-internet Irish audiences – is viewed, Sam Basu’s Becoming Manifold (2016 – 2017) comprises monochrome banners filled with marks that, like the Atlantis inhabitants, act loopy, spiralling and interlocking with a demented intensity. The banners are hung in rows and they dominate the space, leaving the viewer struggling to gain perspective as they manoeuvre themselves between the suspended appendages.

The inspirations of the first floor draws through its lungs a literal and metaphorical air of violent accusation. The scarified auditory surfaces of Fabienne Audeoud’s Practice (1997) are a protracted, insatiably defiant, shudder in the loins of curatorial conception. The polymorphous vocal gymnastics are both a revolt against commercialised modes of production that chop the world into consumable attractions, and a reflection of a culture of perpetual alarm where events tumble helter-skelter into the world from some dark, forever open orifice. Ditching the monochrome for something more cheerful, Sam Basu’s banners reappear outside Practice as a pair of graffitied shutters.

Opposite Audeoud’s tryst with paternalistic control is Lucy Stein’s Inflating the Goddess (2017), an installation in which the names of various goddesses (Diana, Isis, Demeter, Kali, Hecate, Astarte, etc.) are smeared in clay mirror-writing on the gallery walls. Washed-up pool ornaments, blown in from some last resort, lie beached and abandoned amid clotheslines on which children’s muddy bedlinen and mucky undergarments have been hung out to dry. The soiled domestic swansong both invokes and revokes the civilian targets, child soldiers, drowning cages and the industrial rape of contemporary warfare. On the mantle, clay Sheela-na-gigs with genitals fashioned from a bottle top, the aperture of a mineral can, and a mineral can pull tab, cast an ambivalent eye on a fecund breath of life emerging from a compost heap of contradictions.

At the top of the phallus, Vicky Langan and Maximilian Le Cain’s 2017 film, Inside, charts the evolution of an embryonic nuclear unit. It is set in an isolated rural dwelling in which something is slowly being incubated: individuation, perhaps, or collaborative self-effacement. Atomised moments excavate a process of withdrawal and symbiotic alienation. The film’s ornate, finely wrought surfaces belie a slow and destructive engulfment. Flesh as grass and existential dread are deadened by an epidural of repetitions and circumlocutions. Evergreen breath extrudes a slippery visual progeny.

Nun’s Island Theatre provides some post-human relief. Underpinned by a hypnotic electronic score, Plastique Fantastique’s Futurespast Sound Catcher Repeater’s (2017) engaging hoot of extinction envisages an ecological apocalypse and its aftermath: the continuation of a cultural struggle for survival by other means.

The seeds of a more conventional exhibition have been sown at the Tulca Festival Gallery (Connacht Tribune Print Works), with the tone lightened sufficiently to placate the wandering eye and the cauliflower ear. Picking over the Atlantis carcass, morsels of enlightened application and detached appreciation are offered up for our delectation.

The initial air of civility is undermined by a group of sculptures by Kian Benson Bailes that have turned up shit-faced and are regaling the room with howlers. McGibbon O’Lynn’s joint venture, Xenophon: Re-birth and Re-verse (2017), offers a kinky inter-species getaway, complete with headphones, folding garden chairs and a fountain view. David Beattie’s Propositional Things (2017) comprises a mixum-gatherum of objects and materials that sit like pensive apprentices around a slab of grey bedding, contemplating elemental promiscuities. Ciarán Ó ’Dochartaigh’s Druid Love Triangle (2017) is a deconstructed bevel-edged pink motherboard on bevel-edged legs, a pop hippy coffee table with notions. Florian Roithmayr’s copper bowls (2017) ‘spun in collaboration with young people diagnosed with elective mutism’ sit on three flat white sheets. Like the unnamed young people who contributed to their creation they seal their creativity in a form of nuclear ornamentality, a waste appraisal system exemplified by the use of one of the bowls to hold a tablet intended to play a sound track by an old person (Meredith Monk), which was mute when I visited.

At 126 Artist-Run Gallery Richard Proffitt’s The Shortcut: Don’t Follow The Black Dog (2017) provides a recreational set for jumping out of your skin. Around the back of a four-sided inner sanctum, illustrating the installation’s dilemma, a black crow strikes a pose, stalling mid-plummet to eye up the occult bric-a-brac, before disappearing into the gallery floor. In the inner sanctum a soundtrack crackles from a small black portable appliance. Amid the dispossessed pronouns, esoteric adjectives and dangling mortifiers, a voice burns like the inflamed skin of a flayed sky.

Liz Magic Laser’s Primal Speech (2016), a short looped video playing in Barnacles Hostel’s common room, uses actor participants (with opposing political convictions about Brexit and the 2016 US presidential election) to imagine a futuristic primal scream therapy group. Therapy as a form of social engineering and mind control, rather than a motivator for change, is telegraphed by a decor of grey padded walls and beatable cushions. Personal and political narratives are recycled into a pacifying miasma of faux-cathartic relief, the placated protagonists working themselves up into sweat-soaked basket cases.

Reproduced on postcards at University Hospital Galway, Yoko Ono’s Voice Piece for Soprano (1961) provides instructions for screaming in three directions – against the wind, against the wall, against the sky. Such screams as are enthusiastically and bloodlessly ejaculate may lend a vital support to the endangered species of involuntary emanation that eludes the drug trolley’s panoply of deadeners – music to the ears of primal scream pragmatists and artificial intelligence enthusiasts.

As with the collective ‘Us’ of the exhibition’s title, They Call Us The Screamers, there is a disconnect between the gift shop pie forks and the three-floored phallus. The imperatives of profit-driven consumption and the compulsions of creativity perform a reciprocal innervation, with the activation of one requiring the simultaneous inhibition of the other. The original appropriation of the phrase and its latest transposition reveal tensions redolent of communities and individuals trapped in interlocking networks of reciprocal animosity.

In primal scream therapy, trauma exists in the psyche not as a scar, but as an open wound, which like the portrait of the Atlantis commune in Bob Quinn’s The Family remains frozen in time. The psychological wounds produced by trauma effect breaches in consciousness, which the psyche is unable to stitch into a coherent totality.

Like appropriated phrases, scars overwrite instances of traumatic transgression. Silencing the shock and incomprehensibility of trauma they are what get left behind, achieving permanence on the backs of the wounds they deface. As artifices and artefacts, scars circumscribe the creative potential of trauma, sealing its illegitimate points of entry.

It is the ugly truths of They Call Us The Screamers that unnerve and unhinge, when they encroach on the shadows of trauma and transmit through layers of convoluted and convulsive aspiration their hidden resonances and pathological reverberations.