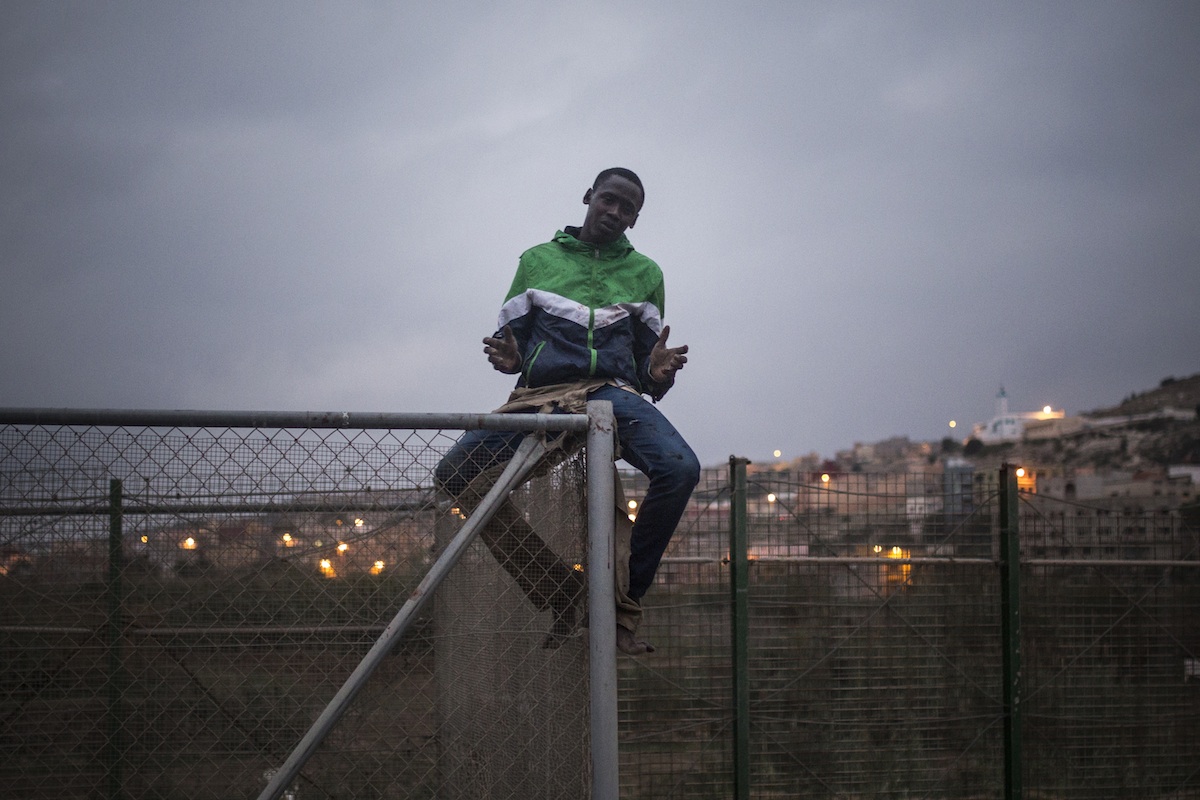 I came across O’Sullivan’s film quite by accident as I had travelled to VISUAL in Carlow to see the solo show ‘Recreating the Pastoral’ by Yinka Shonibare. O’Sullivan’s film was being screened in the Bernard Shaw Theatre at the same time and I remained transfixed for the film’s duration.

The Great Wall struck me in the methods used by the filmmaker: his minimal, sustained shots somewhere between art film and factual documentary. The diversity of locations that the film visits does not cohere into a distinct narrative, but rather gathers together visually similar situations which grow into a visual essay over fortification, isolation and exclusivity. Reflections on shiny glass buildings towering over concrete pathways where people are passing by, on their way to somewhere, in a hurry it seems; CCTV images of desperate individuals racing to get over a barbed wire fence once the guard has turned his back, cut to shots of a dry barren landscape on the other side. We don’t know where the passers by are going to, or what the others are fleeing from, yet they share a sense of being walled in, or walled out. The multiplicity of scenes, movements, content, layouts and shots that O’Sullivan offers his audience is overwhelming, and one cannot possibly engage with them all, yet perhaps this is the point.

The main feature on the soundtrack was the telling of Franz Kafka’s short story ‘The Great Wall of China’ in the original German: ‘Beim Bau der Chinesischen Mauer’ written in 1917. The relationship between the audio, the subtitles and the images made the story’s subtle conviction a visual translation rather than a literary one. It sealed Kafka’s now century-old story with a timelessness that current generations can appreciate, resonating with the ‘let’s build a wall’ idea being repeated throughout history as well as in our current daily newsfeeds. The dark tone of the soundtrack floated over the scenes and led us in and out of a familiar silence, punctuated by the dense German voiceover. One is compelled to read the subtitles and made to feel alien, thus linking the film’s audio, visual and contextual aspects as a poetic piece, as well as highlighting how the ‘language barrier’ acts as another means of segregation.

For me the defining feature of the content was that it was indefinable. It was impossible to distinguish the people, the places, the languages etc from one another and instead rendered my knowledge and experience small and insignificant. I couldn’t possibly settle in to the comfort of prescribed identities, ideology or hegemony. There was no lead in towards guilt or a mollified sense of safety that the Western audience can normally absorb from traditional documentaries. Rather it opened up an ambiguous vision of a very real social climate with Europe as a backdrop. The irony may be that the film is an explicit example of distancing, the ‘fourth wall’ being the threshold that neither side can cross and which becomes a deafening metaphor. To deliver a perspective on the outside, the unknown, the untouchable, is the principle that the documentary attempts to uphold. That it crosses ‘boundaries’ yet aims to leave more in its wake. O’Sullivan challenges his film to move past this category and become something more than a preaching moralistic vocation. Instead he builds a gateway through which the audience is invited to enter and leave as it pleases.