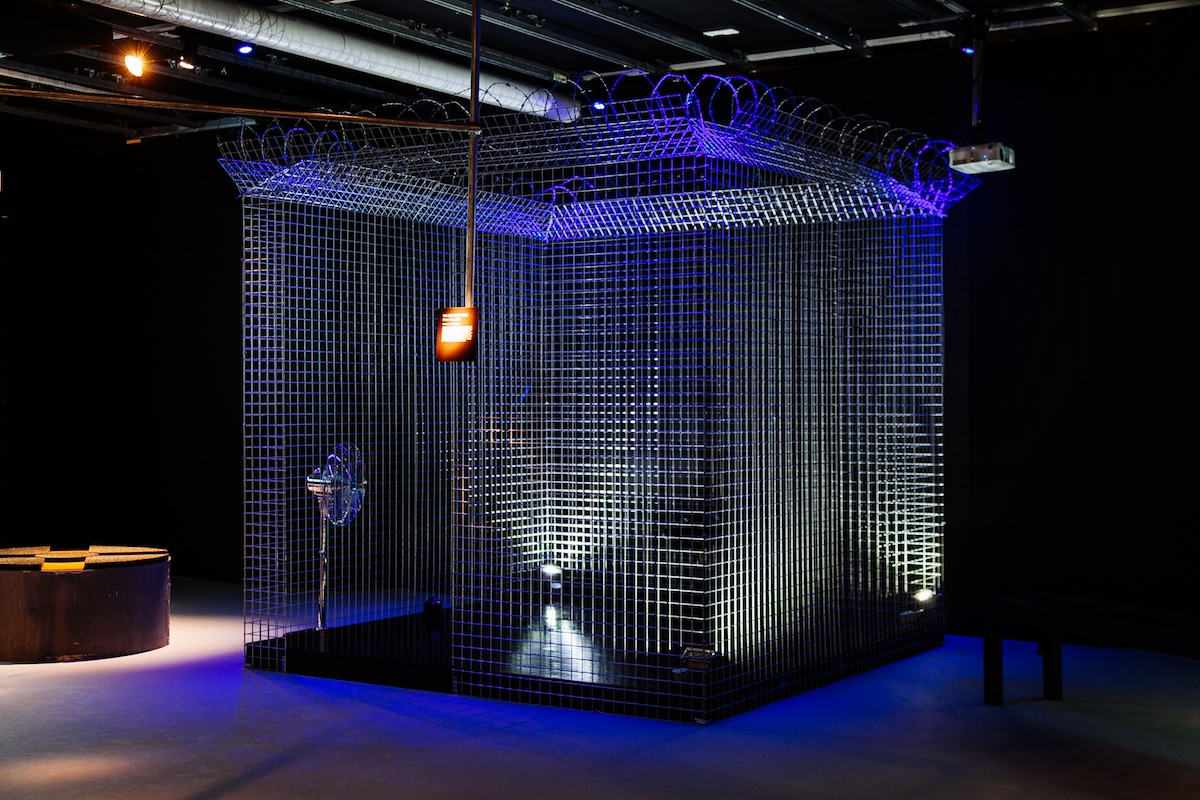 Design and Violence at the Science Gallery, Dublin

I am in a small cell. There is a slit for a window but it’s impossible to see out. A food tray is pushed through a letterbox. A light flashes intermittently. I sit on a bed, white sheet, copy of Men’s Health on the floor. Metal toilet in the corner. A desk. Books lying open. I get the measure of this place. The books, I tell myself, are how I will get through this. A jump cut to another cell leaves me disorientated, searching for my bearings, like waking from sleep in a strange place, but it is not another cell, it is the same cell from a different perspective. Psychological problems, breakdown, psychosis, suicide tend to occur in solitary confinement, the voice-over says. People are in for a year, which can easily turn into four or five. [1]

Now I am in a small motor boat, smoke emanating from an engine. A man smokes in front of me in the dark, amongst the other refugees. Above a helicopter hovers, a cool night breeze, fires, an abstract shifting landscape, walls that appear like rigs, sometimes with openings, mutating into graves. Giant heads rise from the sea. I float up into the air, twice, see this from above, as in the cell. A woman in a headscarf repeatedly catches my eye. I find myself looking away. I am rescued, airlifted, but I am alone. I look down as the small boat and the refugees recede beneath me. The Weight of Water [2], is gravitational, evoking the thousands drowned in the Mediterranean, but I am antigravitational, falling upwards while everyone else is left behind.

Nine minutes of solitary confinement, seven minutes on a night boat as a refugee, both immersive tales told in Virtual Reality. Can this new form counter the limits of empathy by offering a piece of another’s life, a memory, an illusion?

The exhibition, in multiple forms, provides a substantial philosophical enquiry into the intersection of design and violence. Elsewhere in the gallery we are presented with a 3D printed gun, computer code as weapon, Stuxnet, Zero Days [3], images of pineapple submunitions, (((typography of hate))), Amnesty International stitched roses posters against FGM, a container for torture where you cannot stand, text and images of ecocidal IR8 genetically modified ‘Miracle Rice’ and of objects repurposed by activists – the yellow umbrella in Hong Kong, the toilet brush in Hamburg, the wheelie suitcase in Ireland…

Although the exhibition captures very well the role of new technologies in enabling and even increasing aggression, more could be made of the violence inherent in all products, their production within Capitalist systems of inequality. And there could be a greater emphasis on the Patriarchal – violence against women, including sexual violence, and the homophobic, racist, colonial and neocolonial oppression and poverty – that is built into the very fabric of societies. What about the design and redesign of political systems, the rise of the far right, the fear of terror? Some of this gendered violence of the Law is captured however by the display of a speculum and a copy of the Irish Constitution in a glass box, turned to the Eighth Amendment.