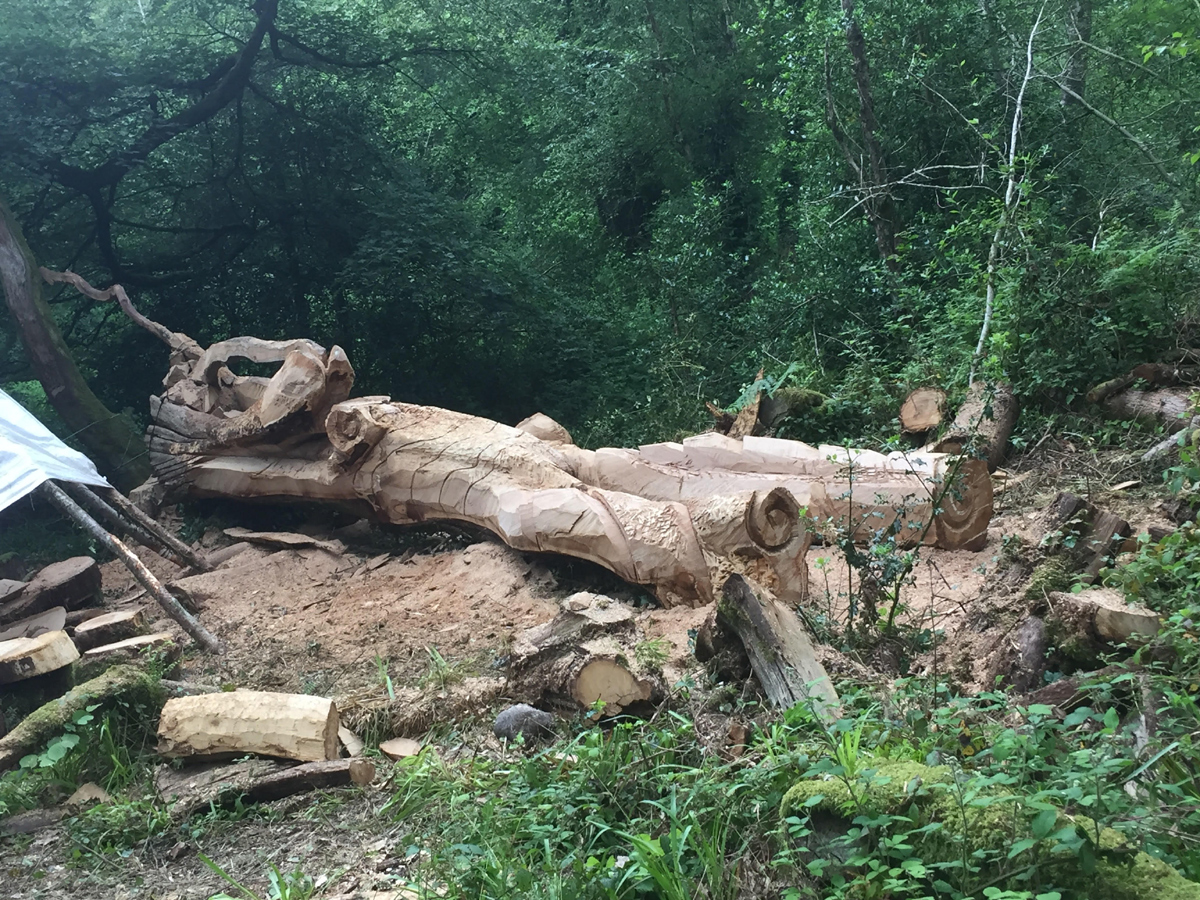 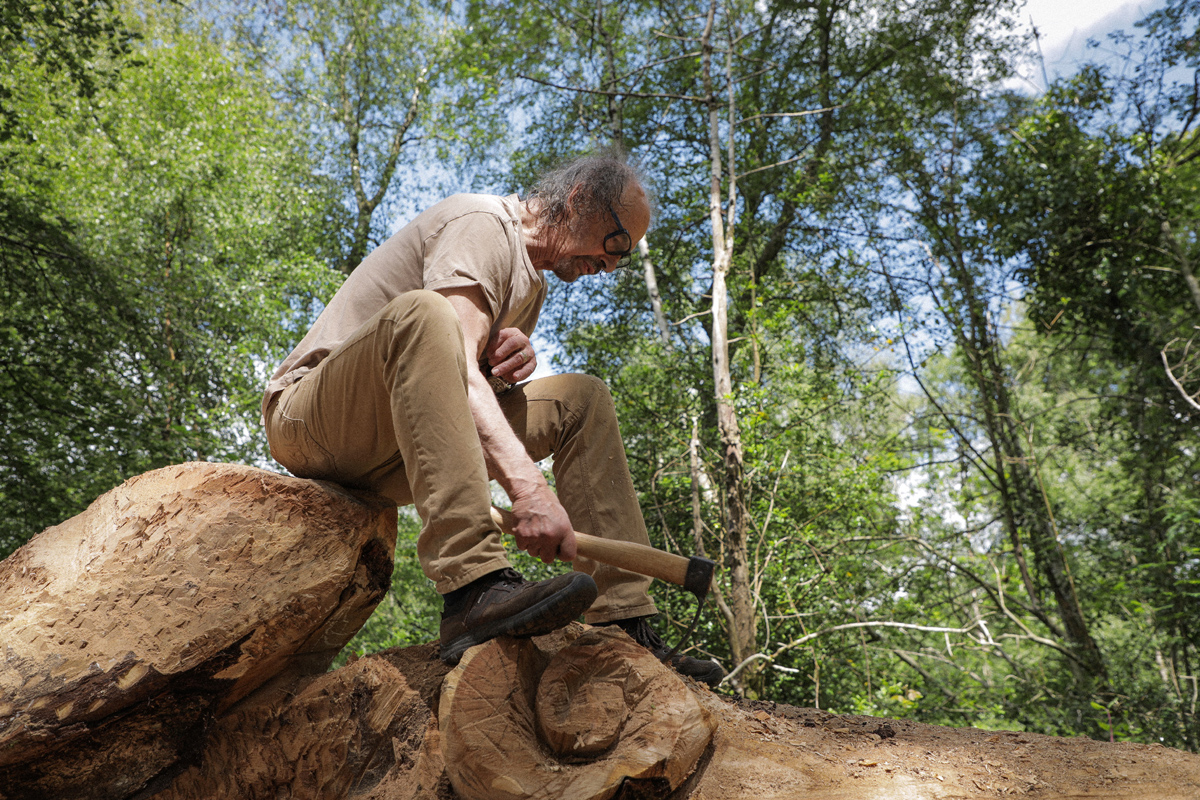 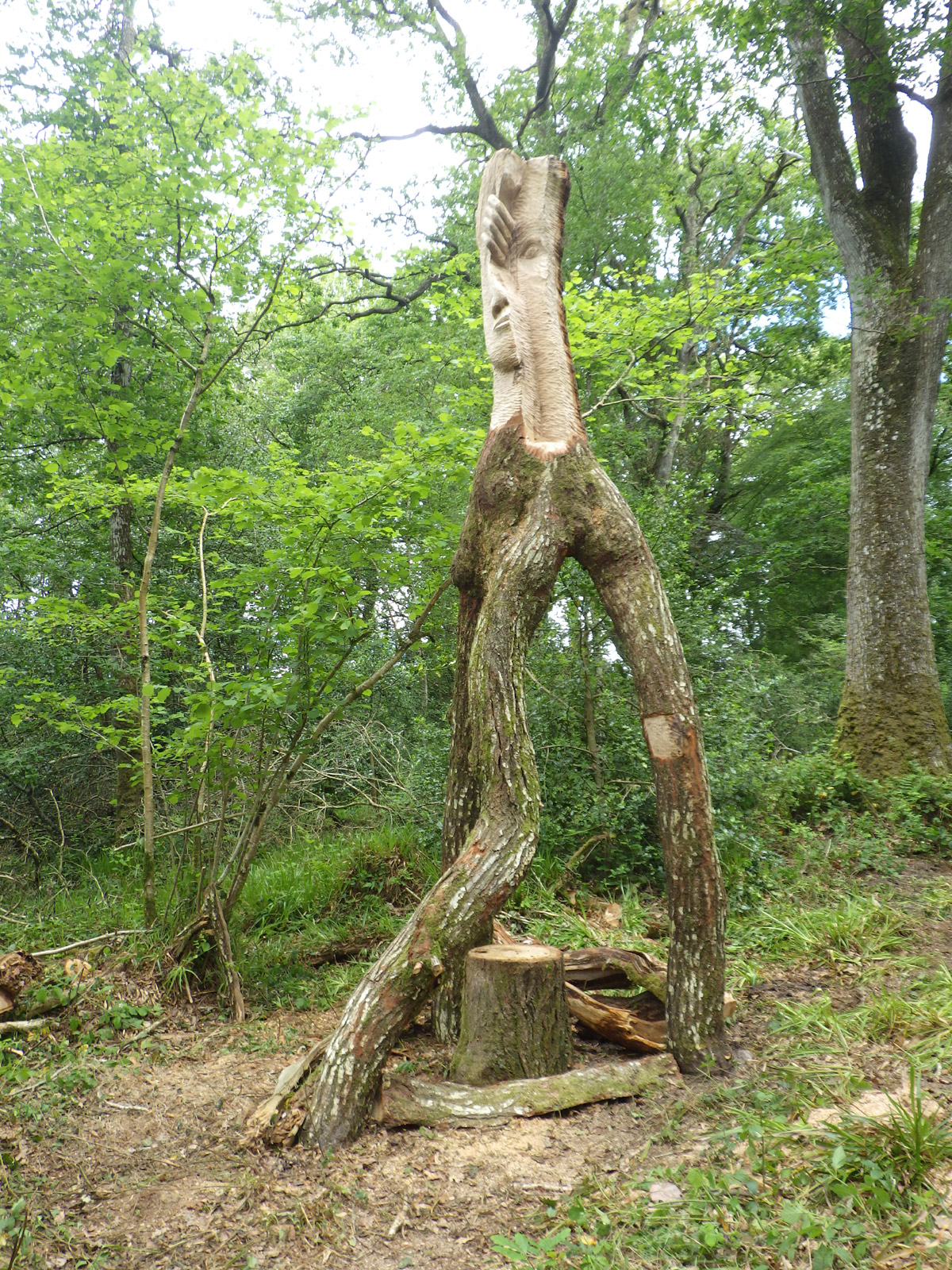 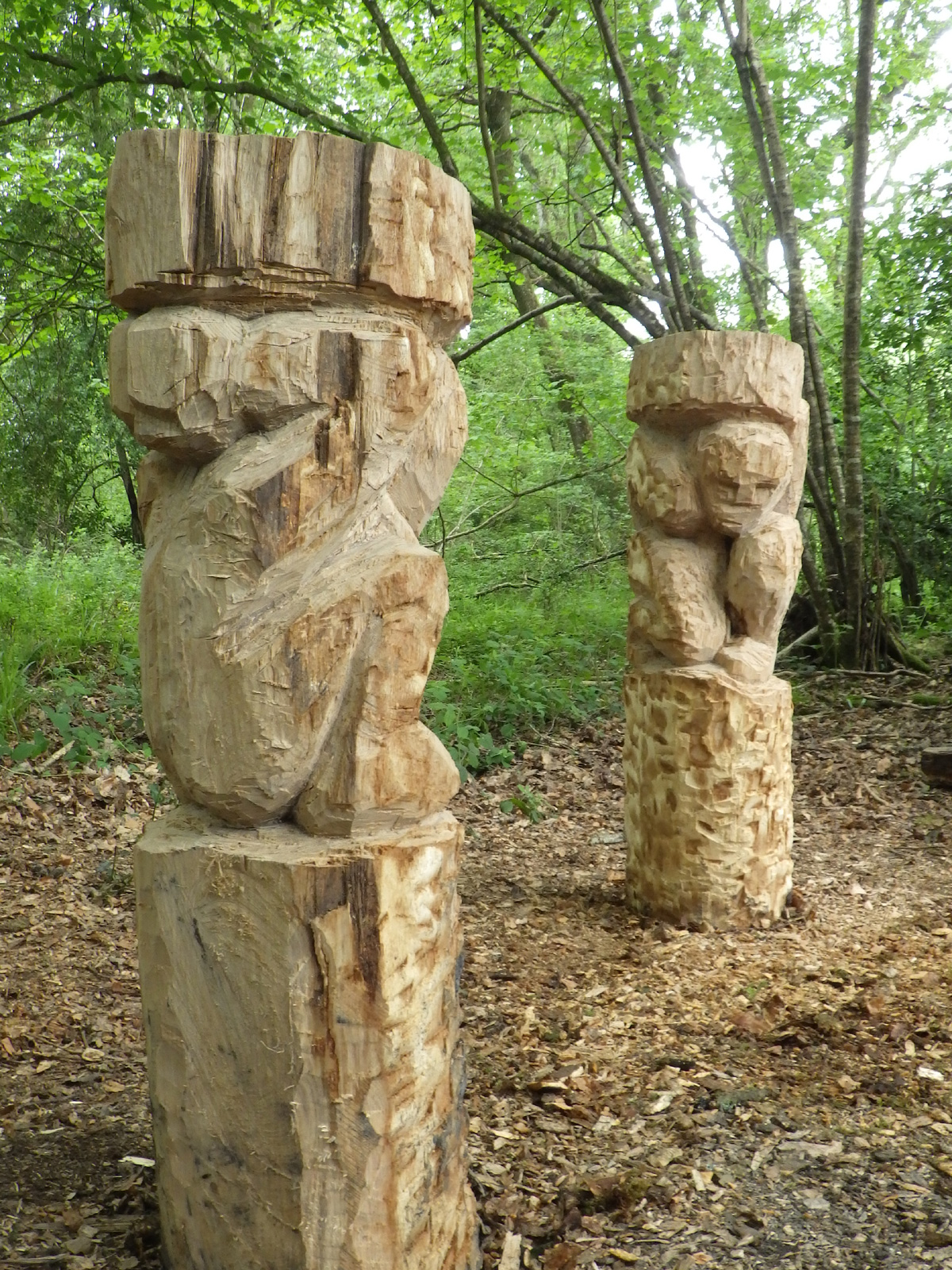 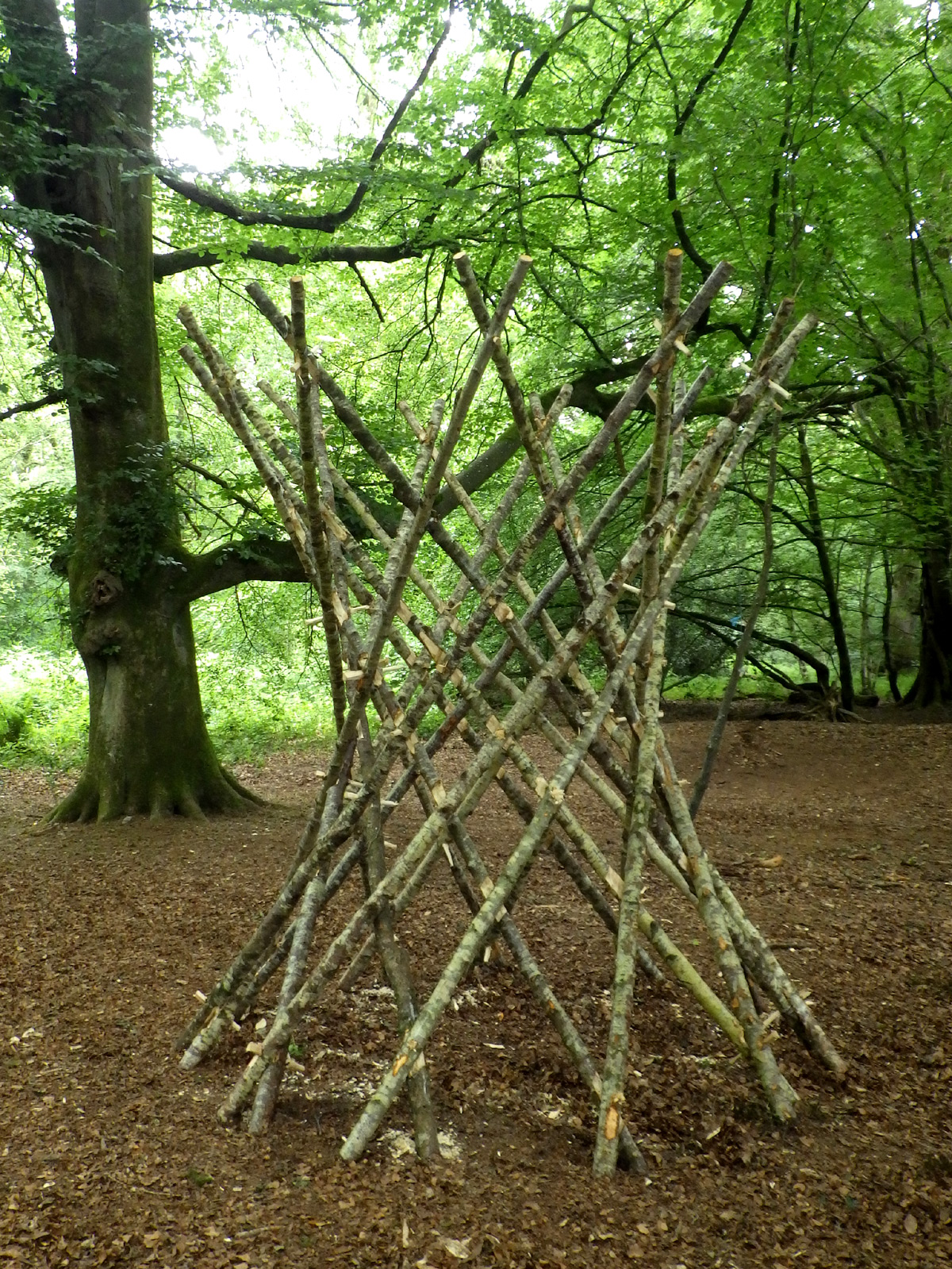 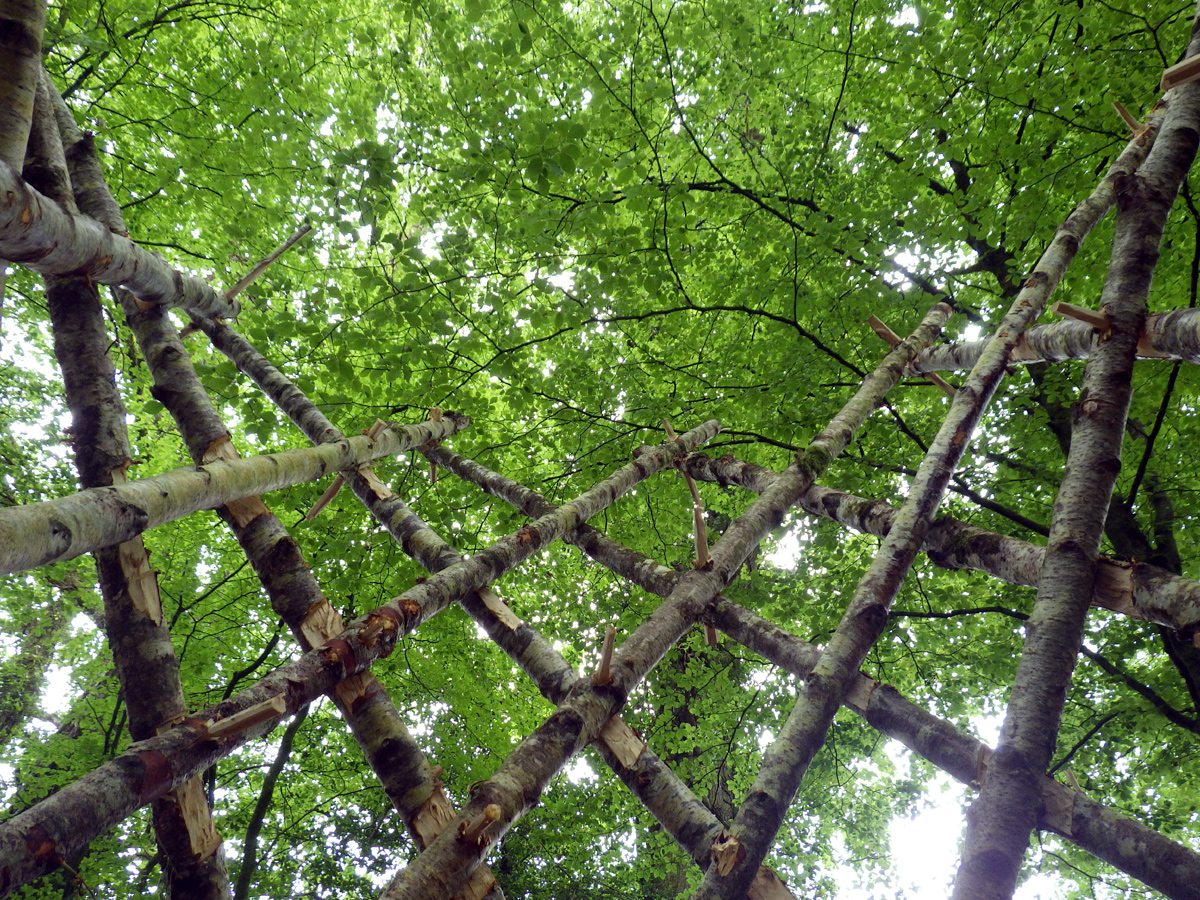 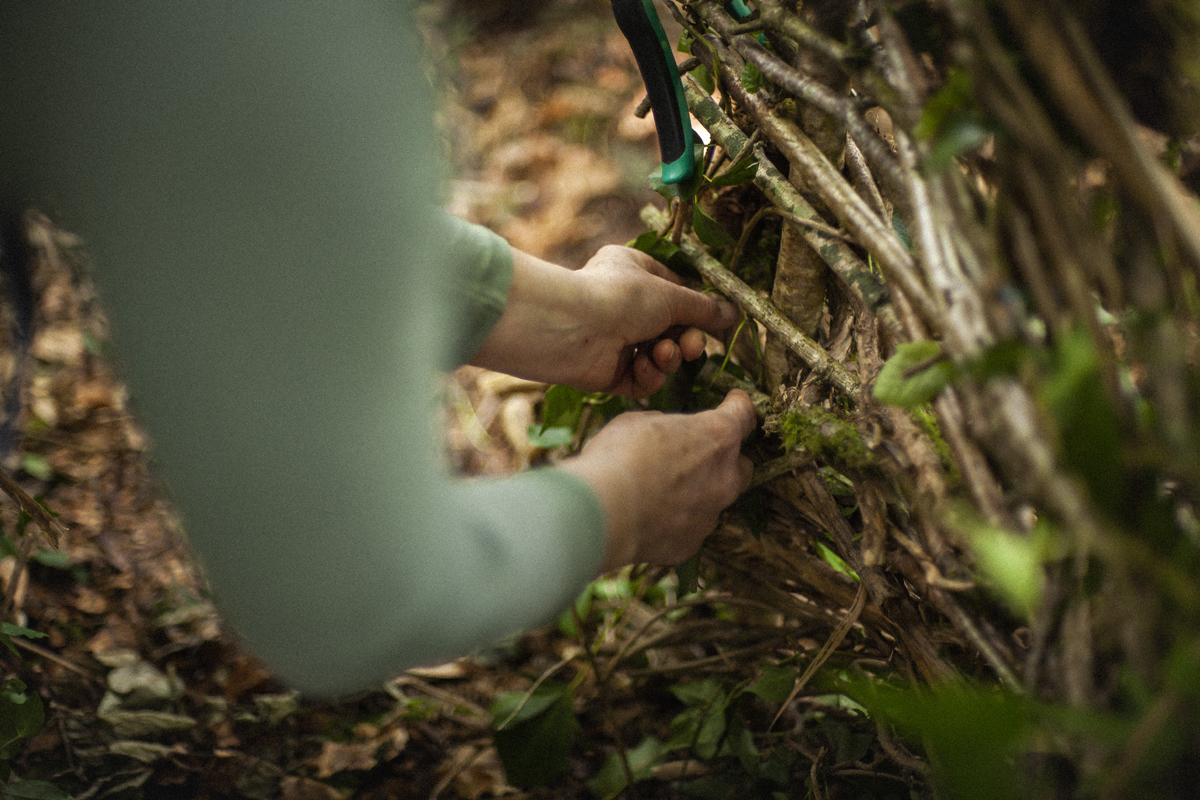 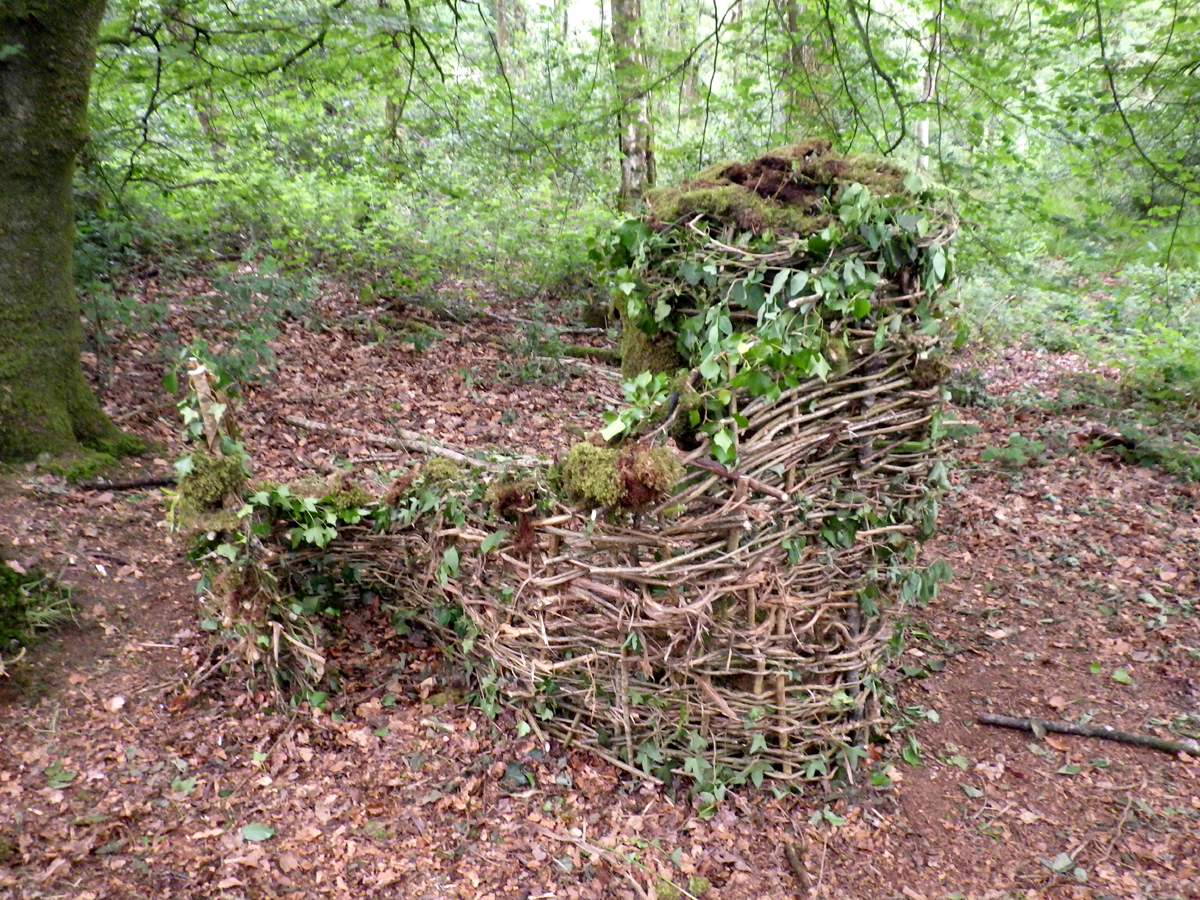 A visit to Tomnafinnoge Wood on the last day of a sculpture symposium led to a consideration of the persistence of craftsmanship in Irish contemporary art.

The five artists involved in the symposium: Niall O’Neill, Róisín Flood, Dave Kinane, James Hayes, and Conleth Gent had ten days to work ‘unplugged’ in the beautiful, but unpredictable (weather-wise) woods near Tinahely. Before starting the project, the participants were given a number of parameters to which they had to adhere, including absolutely no fire and no electric tools.

The National Parks and Wildlife Service, one of the main sponsors, provided a man with a chainsaw to cut downed trees to requested sizes – only trees that had already fallen were allowed to be used; the artists did not damage any living tree in their endeavours. As well as this environmental mandate, the artists could use any hand tools (measuring devices, chisels, axes, hand drills, etc.) in order to create artwork.

Over the ten-day period the makers set about making. What surprised me, as a visitor, was that the artists produced so much work in such a short space of time. O’Neill’s piece was the sole work that was incomplete when I visited, but he lives nearby and his piece is arguably the most ambitious being a carving in a huge tree!

In addition to O’Neill, Gent and Hayes were also woodcarving. Gent had carved an abstract face into one end of a large branching tree limb and the final touch was to stand it up as a tripod. It appeared to be almost walking, spider-like, through the woods. Hayes carved two blocky caryatid figures into short columns and they seemed to provide a portal into a glade. The figures, male and female, represent a duality within nature, both benign and malign in their disinterest. The carvings are roughly chiseled and appear both ancient and contemporary.

In another glade, Kinane’s constructed sculpture was the culmination of ten days of measuring, hand-drilling holes, and carving custom dowels to put together numerous saplings into a curving, open-mesh structure. Kinane has entitled the piece Tearmann na Feannóige which he translated for me as The Sanctuary of the Hooded Crow. As he pointed out, the piece was open-ended and could easily provide a sanctuary to fauna in need.

Flood’s piece also required calculated thought and meticulous awareness to weave together branches into a curved structure whose point was to eventually disappear into the woods. When I visited, Flood was applying finishing touches of ferns and moss in the hopes that animals may build comfortable homes within her work.

The concern for the environment and importance of craftsmanship was obvious in the work of the five artists on the symposium. In addition to creation, the artists also provided conversational information about their work in the woods to casual passersby. As I was leaving the woods myself, I was approached by a jogger who enthusiastically asked questions about the symposium since I was in the vicinity of the sculptures. Both local artists and the general community are hoping that this wood symposium will become a regular event.