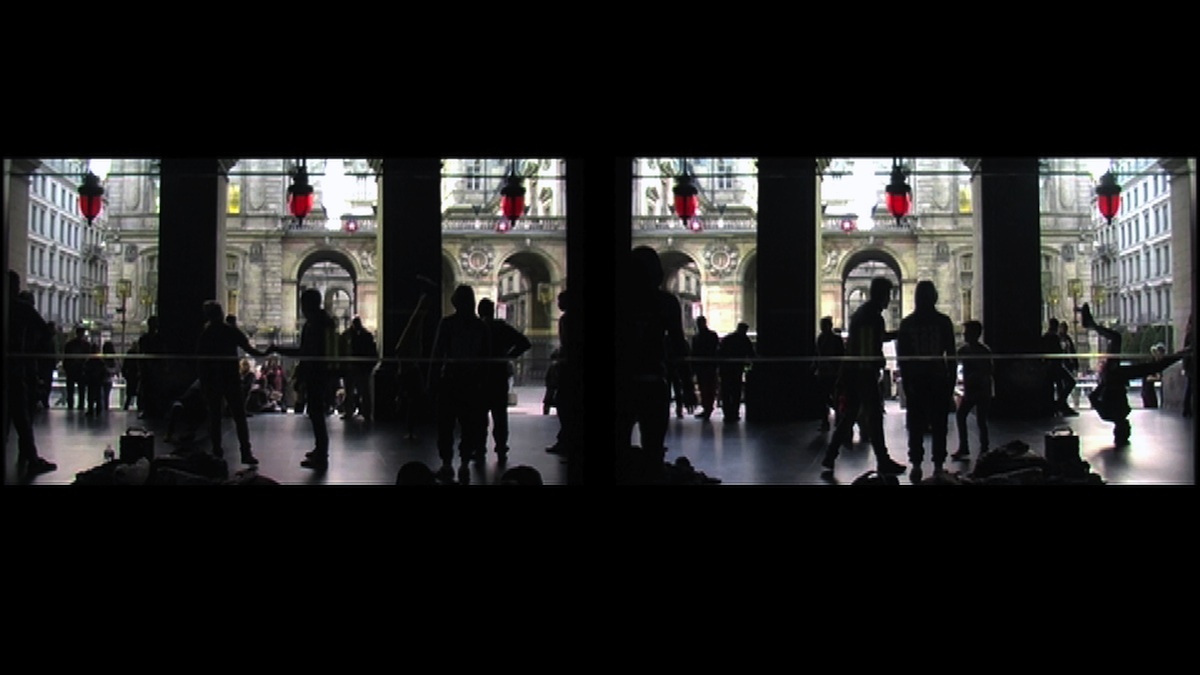 This October, the 2016 Enniskillen Arts Open showcased the work of some 25 artists including Andy Parsons, Carolin Koss, and Emma Zukovic, but the exhibit which took me to the fair was Stephen Gunning’s trio of video portraits displayed in two rooms in the blacked-out basement of the Clinton Centre. The Dublin-based artist travels abroad regularly to record everyday scenes that appeal to his sense of colour, light, symmetry and shape.

Lyon’s landmark opera house was extended 30 years ago by the distinguished French architect Jean Nouvel. In Rites of Winter, begun in 2013, Gunning echoes Nouvel’s synthesis of old and new in a work designed to mark the centenary of Igor Stravinsky’s innovative and controversial opera. As ballet dancers rehearse inside the building, young break dancers in hats and caps practise their hip-hop routines on the shaded portico outside. Slinky silhouettes pirouette, gyrate, cartwheel and head spin. In the background, cars and pedestrians criss-cross the sunlit Place de la Comédie. The fixed camera elegantly frames the scene while the soundtrack mixes hip-hop grooves with snippets from Stravinsky’s orchestral score.

Momentarily, I am foxed by the further juxtaposition of African rhythms, oriental strings and jazzy piano emanating from In Shadows at the opposite end of the room. Louder and groovier, these remixed recordings seem at first to relate to the hip-hop artists in Lyon rather than the market street in Essaouira, Morocco. Such confusion serves to underline the clash of global cultures in our 21st century world. Gunning’s high-angle camera records the movement of shoppers; they pass through his time-lapse slow fades to emerge and disappear as mere shadows. When stallholders light their lamps, a bright yellow glow suffuses the whole picture.

Gunning filmed monks and nuns kneeling in solemn prayer in the chapel of St. Gervais in Paris. The only touches of real colour are in the stained glass windows in the apse and the illuminated icon on the altar. In Carmelites subliminal soundscapes match the meditations of the worshippers.

The artist often revisits the scenes he so vividly portrays, varying the duration of each new piece. Captivated, I too return to view his work, not once but several times.