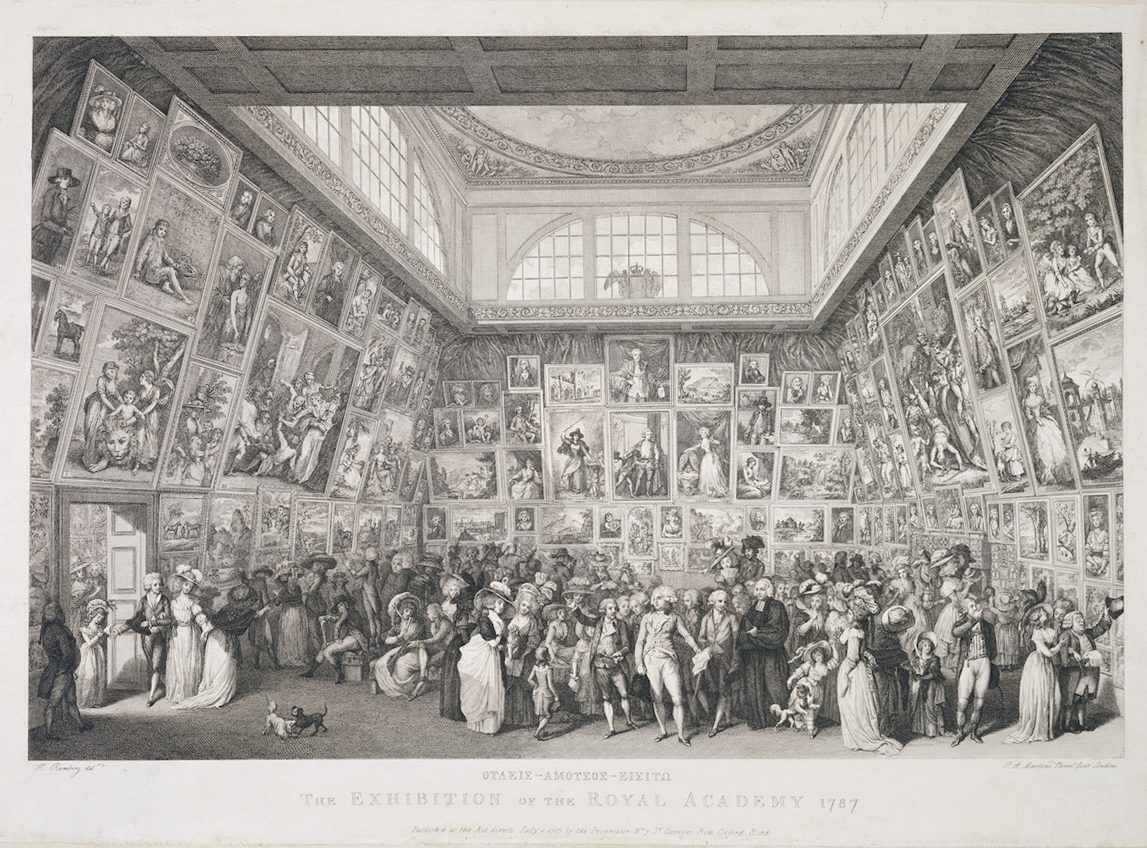 Fig.1. The Exhibition of the Royal Academy, London 1787. Pietro Martini after Johann Heinrich Ramberg, Engraving and etching. © Trustees of the British Museum, London. 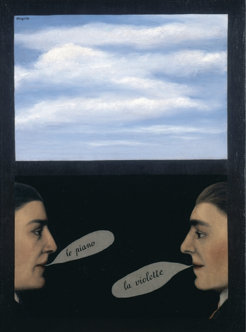 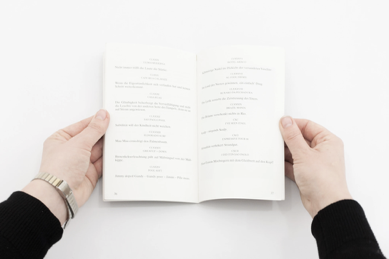 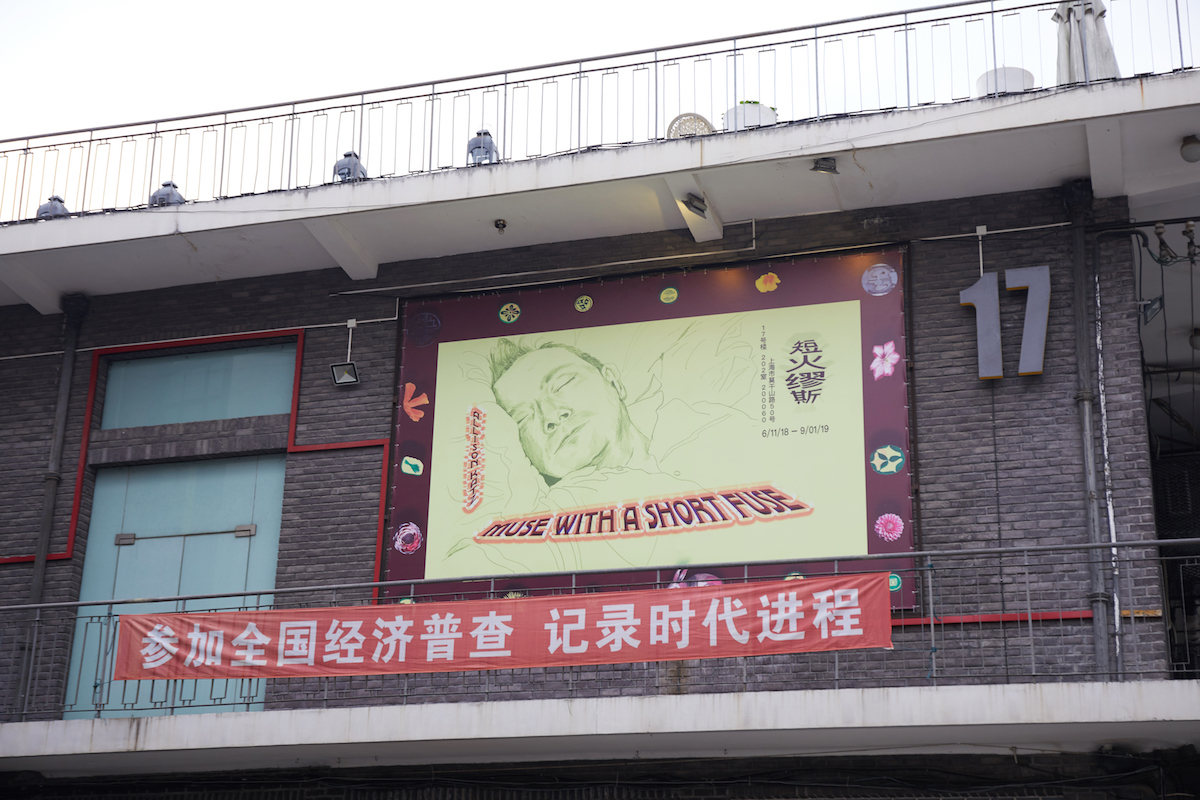 In this essay, Julia Dubsky looks at histories and typologies of titles since 18th-century developments in European art, via Symbolism and Surrealism toward recent examples of ‘these placeholders for very short text’.

The title of this essay is an anagram of the words ‘title history’. I borrowed that titular strategy from a painting I saw by the artist Willem de Rooij, titled Vertigo’s Doll (2010), which is an anagram of ‘silver to gold’. Titles are ubiquitous, even when they are ‘Untitled’, yet there is surprisingly little written about them. Marcel Duchamp referred to titles as “an invisible colour”, thinking about them as a component of artworks on a par with other formal parts of a picture. There is a history of twentieth century artists referring to titles as ‘short texts’ which John Welchman wrote about in his 1997 book named after Duchamp’s idea. And among the few other books on this topic, Ruth Bernard Yeazell writes in Picture Titles: How and Why Western Paintings Acquired Their Names, that the history of titling is only about 300 years old:

For the vast majority of European paintings before the eighteenth century, the absence of a title testified… to the default condition of artistic practice. …[pre 18th c] pictures have their names, but we do not owe those names to their makers.[1]

Few of the titles in the National Gallery, for example, are the artists’ making. The need for titling only arose with changes in the art market – the decline of religious and aristocratic patronage, reproductive printmaking, newly formed academies in France and England, the growth of public exhibitions and public museums – which meant that artworks were being shown away from the context in which they were made and of subjects that were beyond the stock of recognition. The audience began needing some sort of short text accompaniment to engage with what they were shown. Titling, according to E. H. Gombrich, “is a by-product of the mobility of images”. Previously artworks were far more stationary, and all those involved in the commissioning, making, and viewing would have recognised the subject sufficiently, without a need for titles.[2]

Yaezell’s prologue includes two images of academy exhibitions in the late eighteenth century that show homogenous crowds encountering walls clad with paintings for public viewing. In the London etching (Fig. 1), a young woman illuminated in the doorway is reading a catalogue. Contrasted with a figure in the centre of the picture that appears to be engaging with what’s on view orally to the audience around him, Yaezell notes a democratisation of interpretation. While the central figure is privy to the subjects depicted in the paintings, the young woman can also access this information by consulting the catalogue.[3] Confronted with unfamiliar icons and folklore, even if just portrayed in unfamiliar ways to the locality, a need developed for interpretational prompts. Otherwise a painting of Adam and Eve could be read as a woman feeding an apple to a snake.[4]

In Gombrich’s words, writing was “banish[ed] . . . from the picture space,” with the Renaissance, lest it should damage the ideal for pictorial illusionism.[5] Previously, gothic scrolls included text, of course, but in the words of one characteristically dismissive eighteenth-century poet that Yaezell quotes:

[gothic painters] took the strange precaution of making rolls coming out of the mouths of their figures, on which they wrote whatever they claimed to make these lazy figures say…[6]

The impetus for textual language to accompany pictures moved from within the picture to banishment; then resurfaced in the passenger seat, as titles. Paintings that were not yet titled were baptised in hindsight by middlemen, such as dealers and critics, to facilitate foreign audiences and the development of art history.

Curiously, in the eighteenth century when artists began titling their own work, Yaezell writes that it was at first still in the same functionary modus as the middlemen doing catch-up. These titling formulae are recognisable and there are other genres. Welchman isolates three varieties of titling that developed roughly from the 1870s to the 1920s: denotative, connotative, and untitled. Denotative referring to those continuing a kind that assists interpretation more literally; connotative meaning those that are “allusive, or even in Dada and Surrealism, absurd and non-consequential”[7] to what is represented in the picture; and untitled referring to those that withdraw from either of these functions. Categories like these could be as relevant as any descriptor vocabulary for marks, surface or colour.

In a 2011 Frieze article, ‘[insert title here]’, the critic Tom Morton categorises exhibition titles according to: The Eponym, The Eponym Plus, The Place and Time, The Colonic, The Literary, The Musical, The Salutatory. For example, the paragraph on Colonic titles includes, Unveiled: New Art from the Middle East; the Salutatory lists Dear painter, paint me… (Centre Pompidou, Paris and touring, 2002), You have not been honest (Museo d’Arte Contemporanea Donna Regina, Naples, 2007) and Fuck Off (Eastlink Gallery, Shanghai, 1999). Or for the Literary, Morton writes: “We might think of Ezra Pound (invoked by Faces in the Crowd at the Whitechapel Gallery, London, in 2004-5, and Pale Carnage at the Arnolfini, Bristol, in 2007) or W.G. Sebald (see After Nature at the New Museum, New York, and 50 Moons of Saturn, the 2nd Turin Triennale”.[8]

I came upon another categorising list-fest in Brewer’s Curious Titles: The Fascinating Stories Behind More Than 1500 Famous Titles, by Ian Crofton. Crofton arranges titles of books, films, artworks and music according to ‘curiosity’ which he goes on to describe as those titles that seem ‘odd’ and “either curious in themselves, or that have a curious story behind them”. He wrote that his original text could have been four times as long, but he narrowed it down to the themes that prevailed and organised them alphabetically. An impression of that: Angels, Birds, Blue, Body Parts, Bridges, Cats, Chess, Compass Points, Creation, Dance of Death, Dogs…, Don Juan, Drink, Endymion… Faust or Faustus, Fish… Green… Letters, Long Titles… Meals… Numbers.[9] Crofton’s index seems like a list of symbols.

Welchman writes that “during the last two decades of the nineteenth century, the theory and practice of the title underwent one of its most significant developments”[10], and he emphasises upon the role of the Symbolists. One such artist, Odilon Redon, wrote in his journal: “The title is not justified unless it is vague, indeterminate and aspiring, even confusedly equivocal”.[11] Redon’s paintings and drawings derive from fantasy rather than realist documentation and he pointedly titled a series of his etchings ‘Dreaming’[12] to contrast the Impressionist school of drawing, and titling, from observation. There is little orientation between his titles and what the pictures depict. The 1879 ‘Dreaming’ series, for example, is titled with one or two words signifying broader ideas – such as Blossoming, Limbo, The Gambler, Sad Ascent – in contrast, for example, to an Impressionist title like Woman with a Parasol. Madame Monet and her Son (1875). According to Welchman, the Symbolists turned away from denotation towards connotation.[13]

The use of words with pictures was different again for the Surrealists and Yaezell dedicates a chapter on this topic to René Magritte. Welchman quotes Maurice Denis, referring to late eighteenth-century Paris as “literary to the marrow”[14], while Magritte wrote about his aspirations to be “anti-literary”[15]. In Magritte’s painting, The Use of Language (Fig. 2), he and (most probably) fellow Surrealist, André Breton, exchange words as if playing a game of association. Yaezell proposes that the painting depicts Magritte’s titling process. Magritte often enlisted other artists to help him ‘find’ a suitable title. Yaezell quotes David Sylvester’s estimate that “of the artist’s 700 titles (distributed among some 1,800 works), nearly half were supplied by other people”.[16] Along these lines, Martin Kippenberger produced a book in 1986 of titles that other artists could pluck out and use at their will (Fig. 3).

It speaks to thinking of titles as very short texts, that can be more or less salient even in their own right. I have the impression that writers frequently hoard words or phrases in lists, as material they might deploy in future contexts.

An Artnet review described Welchman’s book as a “basically deconstructive manoeuvre: to bring the seemingly marginal (the title) to the centre, to see what can be overturned”.[17] If drawing attention to titles is deconstructive on the one hand, in another sense it relates to construction (thickening the broth), because this slot for text lends itself well to planting recognisability and narrative.

I think of the artist Pier Klossowski and something that a critic wrote about the effect of a repetition across a number of his titles:

The repetitive effect caused by the multiplicity of Robertes (Roberte et le Colosse, Roberte et les Collegiens, Roberte au Palais Royal, etc.)… indicate a phantasmagorical obsession but do not reveal it completely… Frustrated by the impossibility of capturing the essence of the phantasm, our eye slides away from the adoration of the imagery and rests upon the aesthetic code.”[18]

Similarly Allison Katz’s exhibition title, Muse with a Short Fuse, stayed with me like language winking. Katz believes that “women haven’t had the space to be purely imaginative”. Is her proximity to Surrealism and Dada a coincidence here? She has said that her “motivation is at times from words themselves”, such as asking what drives her becoming a painting of a car.[19]

Yaezell writes briefly about the socio-political implication of catalogues extending possibilities for interpretation. It reminds me of a comment I recently heard during a studio visit, to think of ‘recognisability’. I didn’t take this to mean providing recognisable elements to viewers in a title or painting is the generous and better path, but that recognisability is an element of perception that is at play: so, what are you doing with it? Welchman writes about women artists from the late 1970s who expounded the untitled / withdrawing title. I described my lusting for titles that awkwardly have too many articles and use the less used version of words, for example ‘mania’ in place of ‘madness’, to stumble their memorability. A friend called this “a self-cleaning title”[20]; there and not there, like an invisible colour.

Whatever the device – rhyme, repetition, anagram – any use of words that draws attention to the verbal language intimates the textual placeholder that titles are. Another review of Invisible Colour ends with a list by Welchman, “reminding us of the thousand faces of the modern title”, such as:

a name, a moralism, an anecdote, a number, a metaphor, a poem, a composition, a repetition, a philosophical question, a conundrum, a maxim, a quotation, a pun, a tautology, a supplement, a varnish.

Denise Riley extends the list with her own terms for titles “as bossy forefinger, as nail varnish, as knowing didacticism, as throwaway, as disengaged shrug” or (my favourite), “as hazard, like the children’s party game of the donkey’s tail which you must, blindfolded, pin onto the picture in roughly the right place”.[21]