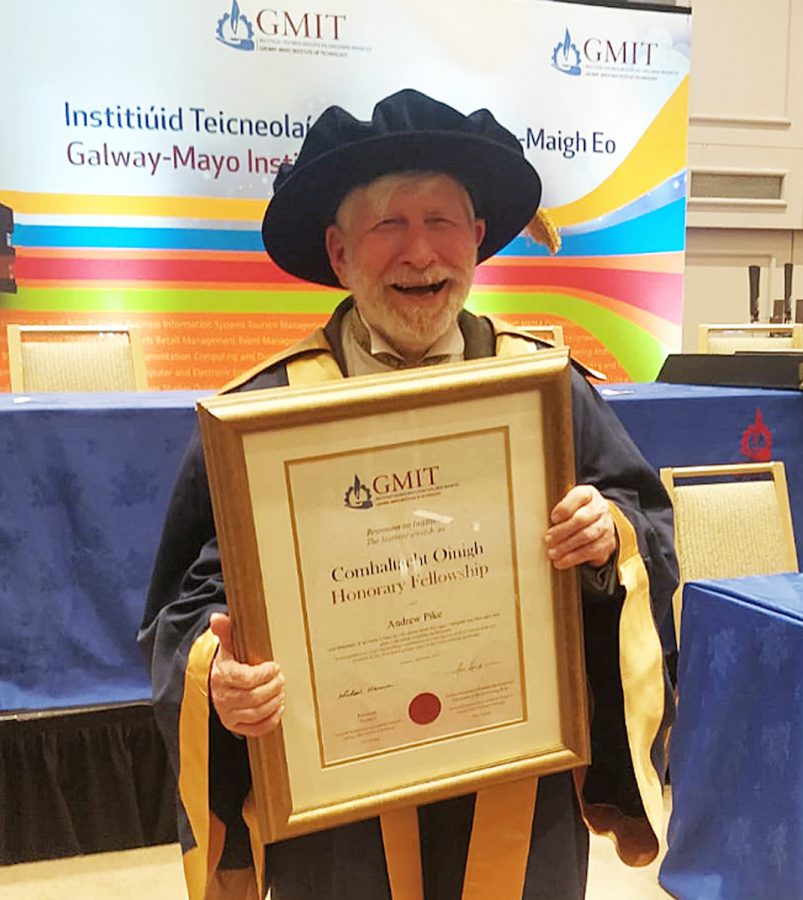 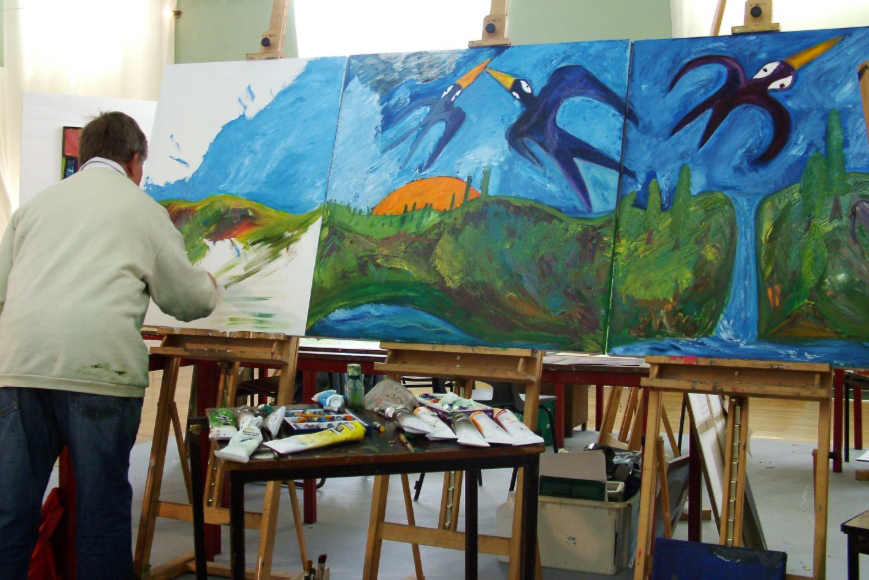 Andrew Pike at work in his studio at KCAT Kilkenny 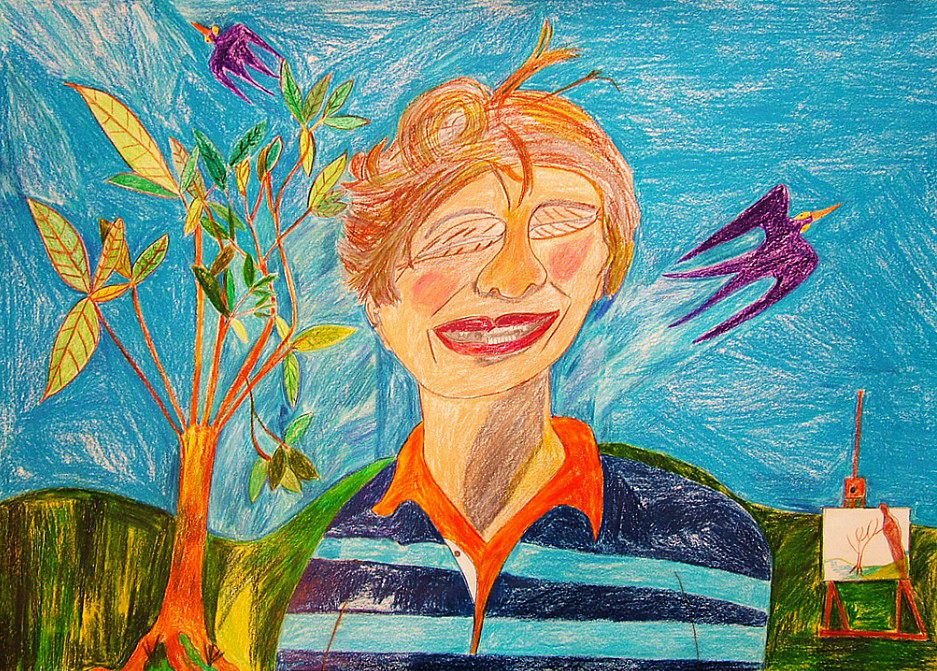 In November 2019 visual artist Andrew Pike was awarded an honorary fellowship at the Galway-Mayo Institute of Technology for having made a “unique contribution to the Irish cultural landscape”. Andrew works from the KCAT Studio in Callan Kilkenny. He has shown widely in Ireland and also internationally, including the Netherlands, Germany, US, Australia, Canada, Scotland, England, Luxembourg, Serbia, Russia, Italy. In 2018 Andrew’s work was acquired by the National Self Portrait Collection of Ireland at the University of Limerick. Here artist Dominic Thorpe interviews Pike about being awarded an honorary fellowship, his practice and life, and his perspective on arts and disability.

How did you feel about being given an honorary fellowship at the Galway Mayo Institute of Technology?

I am very humble about it because I didn’t study in that college. Also because all the students who graduated that day studied and worked there and went through their courses. I felt very honoured and very humble. It is certainly a recognition of my art.

At the presentation your work and the extent and success of your practice was read out to the room. I´d like to talk about some of that with you. For example, how long have you been a member of the KCAT studio?

I have been working hard as a KCAT artist for twenty years. I was there at the beginning and I will keep on going until I no longer have any ideas.

You work in a diverse range of media?

I have done mostly painting. I have also done animation with mixture of different other mediums. I have made wire sculpture and paper sculpture with wire. I just enjoy doing art and that’s the way I am. It just comes out of my head. People ask me “where did you get those ideas?” I get them from my head.

You address a range of subject matter?

I have done a lot of subject matter. Landscapes. Drawings or portraits of myself and also some others, like famous people. I really like nature, rather than human form, and people ask me why. That is just the way I am, I don t know why. I like animals. I like life and I enjoy it.

Some of your animation work appears to be a social and political commentary on war?

My father was a doctor in the Second World War. He never enjoyed it, but he told us funny stories about it. That was his way. He didn’t talk about it very much. I feel that he rubbed something off on me in saying war is not great, it is something that was destructive. Human destruction is awful, and he was a man that saved lives rather than taking lives. Even if it was a Japanese solider he would treat him equally, just as those on his own side. He said it is a monstrous thing that humans do to each other. My grandfather was a colonel in the British Indian army. My father was decommissioned in 1945 and he was looking for work but couldn’t find any. So he ended up saying to my mom “I am sorry I am going for a trip”, and he said “I am choosing to go to New Zealand, Australia, Canada and the U.S. If I find work I´ll come back and collect you and we can all go, together, to a new home”. When you think of it, they were married just before the war or during the war in 1942. So really it was a very bad time and they had a rocky, rough beginning of marriage. So, we ended up emigrating from Ireland in 1948 to New-Zealand. It took 14 weeks and I had my fifth birthday on the ship. I can tell you they really loved each other, to the deep end, all their lives.

What is it about self-portraiture that has been important to you?

I think it is important to leave a sort of legacy. I have done portraits and sometimes I look twenty years younger, sometimes not so young. I think this is important because people will look and ask “who is he, who is Andrew Pike?” A good question, ‘who is he?’ When people look online they find out I work as an artist in KCAT and I think that is the main thing. It is very good to leave a legacy. In the national self-portrait collection in Limerick I’ve got a portrait which I love. It is painted on a roller blind. I have a crazy sense of humour and that’s what kept me going. I love doing art.

In some self-portraits you depict yourself standing in exhibitions of your own work?

I thought maybe few people would actually recognize me standing in the middle and I had a bit of fun doing it.

Irish literary figures often appear in your work, what is your fascination with them?

I think the first literary figure was Joyce, in an animation called Uselesseas. A play on words. I enjoyed poking some fun at Joyce, because he was not a nice person really. He was cruel to his daughter and to his wife Nancy. I think they really were sometimes unhappy. And you know, I just thought, well, it’s time to poke a bit of fun at him. He was difficult but yet at the same time he wrote wonderful books and he is a person who fascinates people. Ulysses is a classic book for Irish citizens and many students get stuck on the middle and they can’t finish it. They don’t know how.

He is meeting Picasso in a cafe. They have no money and no idea of how to pay the bill. So Joyce wrote a verse and Picasso did a drawing on the table clothe and that was their payment. I don’t know how true it is, but I know somewhere in Paris somebody has got that. They couldn’t even pay for their coffee, let alone their rent.

KCAT studio is an inclusive art studio. I am interested in how you think about inclusion and disability in the arts?

The only thing I say is we don’t have disabilities. We are just artists, and inclusion is just what we are. We are not an exclusive club, we don’t say sorry you are not good. We just let people come in and do art just for the sake of it. So really to me KCAT is a forum for other things to happen, I’ll be glad if similar structures develop in other places. I think that will solve problems. We are an inclusive art studio and we don’t care about disability. We just do art. I notice a lot of mainstream artists come here to meet us and look around and they just are blown away. They say “What? People with disability have done this?” And I say “yes they did!” They look at me as if to say you’ve got two heads! No we don’t, we just do our work ourselves. Earlier on, when KCAT was just starting, Tony O’Malley humbly looked at it and said this is what it is to see people helping each other to do art. And that to me this is a marvellous thing. He is a famous Callan artist. And his wife is an artist from southern Canada.  He had some stories about Callan and the past, the 1950s and England. They both were wonderful people and supported KCAT a lot.

What do you feel about the commonly used term ‘outsider art’?

I hate it. As I say, we are just artists. I don t like the term ‘outsider art’. I would like to dig a hole and bury it.

You made collaborative work with Nevan Lahart recently. What was the process of working together?

We both worked together during the KCAT engagement project. We did a political work that taught kids how to vote. And then we did a big canvas. We started painting a landscape. He started painting parts of it, including a river. I did a tree and then he did a circle and did the moon. I covered the sky. We just talked for ten or fifteen minutes then we messed around with paint for the rest of the time. We are both messers and so we just get on well. We like a bit of history and a bit of fun. It’s a lovely piece we made. Many people loved it. Nevan’s studio was so cold I was freezing. And KCAT studio was so warm that we had to take the work outside. I think it would be really good if a proper gallery space buys the work.

You have shown in many countries and in many different kinds of art venues and contexts, is that something you plan to continue?

I think I should continue, and I want to continue. I don’t know how I can do it but I’ll try as long as I can. As I say, this will be my legacy, trying my best and doing as much as I can, otherwise what’s the point.

I know you have achieved a lot, but have you a particular ambition you still wish to achieve?

I ‘ve been to the islands and I have been to further places including Samoa and Japan. Equinox (KCAT theatre company) is doing a European project called Power (Power: we all come from somewhere) and we are going to Prague in early 2020, then Athens a few months later, then on to Italy. Maybe another ambition is I would like to go to the place where my mother was born, in the middle of the Indian Ocean. The trip to Samoa was really vital. I needed proper sun to heat the marrow of my bone. I like Ireland but it’s too damp and cold. If I had my way I would spread my wings and fly out to the south.

Have you further ambition for your art also?

I hope someday, some pieces I have got will go into a mainstream museum collection.

As you mentioned earlier, there were many students getting their degrees when you were receiving your fellowship. Do you have any advice for them as they start out in their careers?

The only advice I have got is just keep working and trying things, new things. Don’t get stuck at one thing. Keep experimenting. If it works it works, if it doesn’t work try something else.

Do you have any advice for those of us who like yourself have developed a practice?

Some artists have a studio, but they don’t know what to do with it or what they are doing. Always asking: is it right or is it wrong? Again, I advise keep going, keep working. And if people like it ok, if they don’t they don’t.

Is there anything you would say to the Arts Council?

I’ll say to them, I know it’s very hard for you, as the government are holding the money back. But keep funding projects like KCAT and other projects with art. Please just keep going, even if they say we can’t afford it. This is vital for the country, because we could kill off our own culture, and I think it’s important to keep our culture alive. If they say no we have no money, just squeeze it out of them, wring it out of them. Without places like KCAT the culture of this country would vanish and then we would be sorry. A sorry nation. Art is the way we communicate.