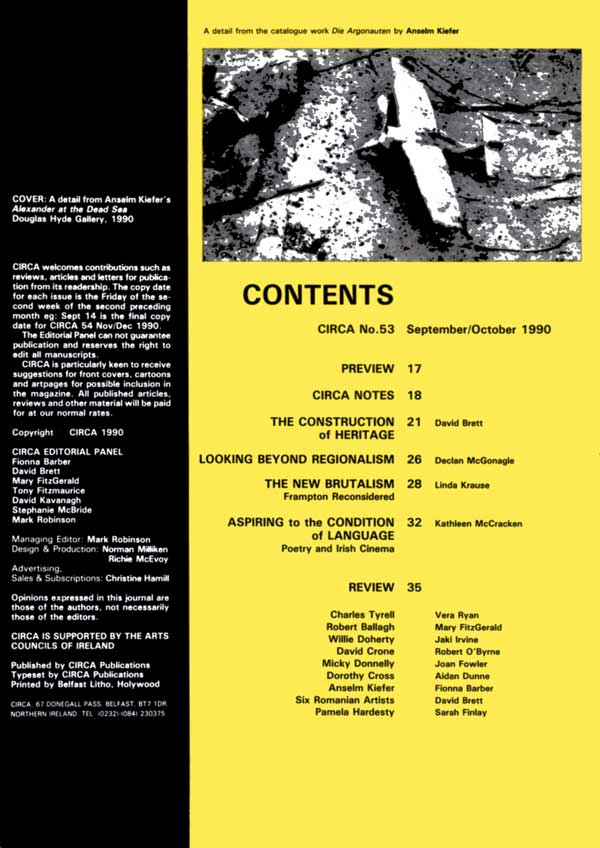 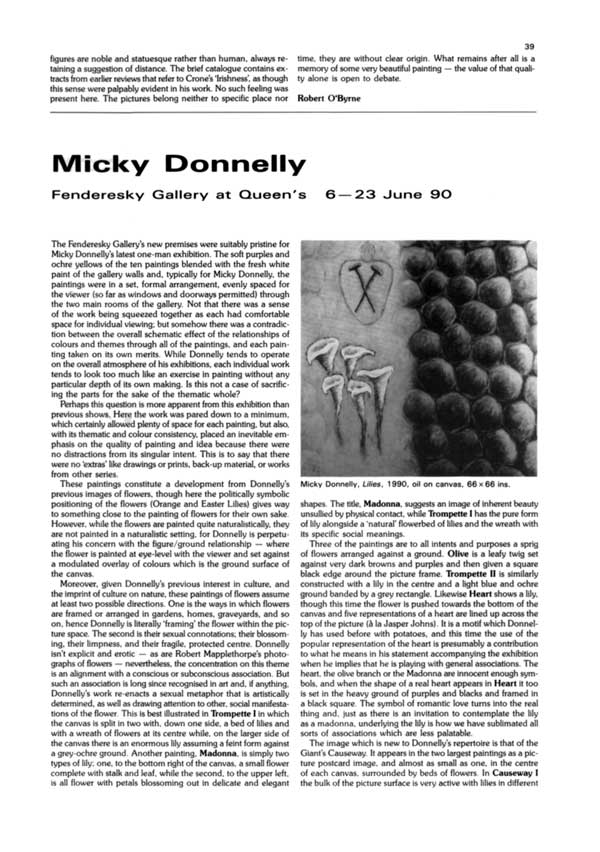 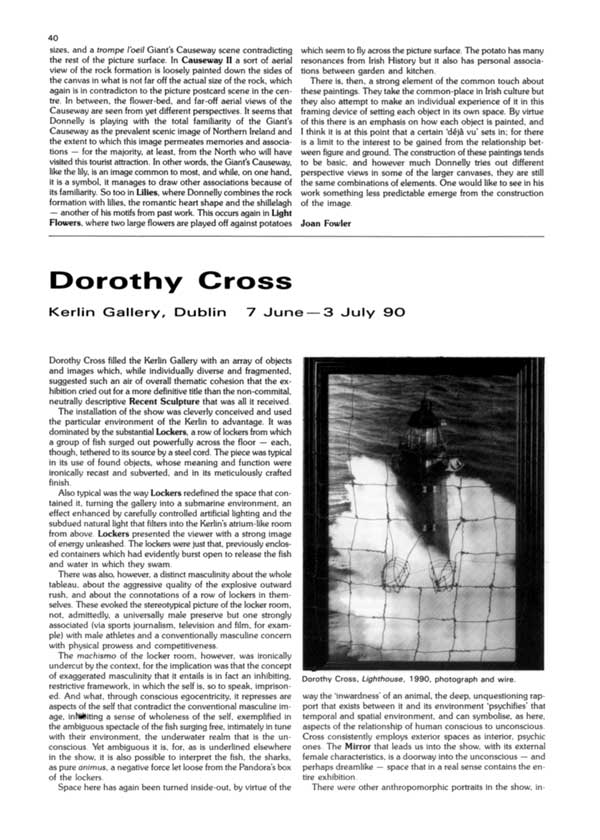 The Fenderesky Gallery’s new premises were suitably pristine for Micky Donnelly’s latest one-man exhibition. The soft purples and ochre yellows of the ten paintings blended with the fresh white paint of the gallery walls and, typically for Micky Donnelly, the paintings were in a set, formal arrangement, evenly spaced for the viewer (so far as windows and doorways permitted) through the two main rooms of the gallery. Not that there was a sense of the work being squeezed together as each had comfortable space for individual viewing, but somehow there was a contradiction between the overall schematic effect of the relationships of colours and themes through all of the paintings, and each painting taken on its own merits. While Donnelly tends to operate on the overall atmosphere of his exhibitions, each individual work tends to look too much like an exercise in painting without any particular depth of its own making. Is this not a case of sacrificing the parts for the sake of the thematic whole?

Perhaps this question is more apparent from this exhibition than previous shows. Here the work was pared down to a minimum, which certainly allowed plenty of space for each painting, but also, with its thematic and colour consistency, placed an inevitable emphasis on the quality of painting and idea because there were no distractions from its singular intent. This is to say that there were no ‘extras’ like drawings or prints, back-up material, or works from other series.

These paintings constitute a development from Donnelly’s previous images of flowers, though here the politically symbolic positioning of the flowers (Orange and Easter Lilies) gives way to something close to the painting of flowers for their own sake. However, while the flowers are painted quite naturalistically, they are not painted in a naturalistic setting, for Donnelly is perpetuating his concern with the figure / ground relationship – where the flower is painted at eye-level with the view and set against a modulated overlay of colours which is the ground surface of the canvas.

Moreover, given Donnelly’s previous interest in culture, and the imprint of culture on nature, these paintings of flowers assume at least two possible directions. One is the ways in which flowers are framed or arranged in gardens, homes, graveyards, and so on, hence Donnelly is literally ‘framing’ the flower within the picture space. The second is their sexual connotations; their blossoming, their limpness, and their fragile, protected centre. Donnelly isn’t explicit and erotic – as are Robert Mapplethorpe’s photographs of flowers – nevertheless the concentration on this theme is an alignment with a conscious or subconscious association. But such an association is long since recognised in art and, if anything, Donnelly’s work re-enacts a sexual metaphor that is artistically determined, as well as drawing attention to other, social manifestations of the flower. This is best illustrated in Trompette I in which the canvas is split in two with, down one side, a bed of lilies and with a wreath of flowers at its centre while, on the larger side of the canal there is an enormous lily assuming a faint form against a grey-ochre ground. Another painting, Madonna, is simply two types of lily, one, to the bottom right of the canvas, a small flower complete with stalk and leaf, while the second, to the upper left, is all flower with petals blossoming out in delicate and elegant shapes. The title, Madonna, suggests an image of inherent beauty unsullied by physical contact, while Trompette I has the pure form of lily alongside a ‘natural’ flowerbed of lilies and the wreath with its specific social meanings.

Three of the paintings are to all intents and purposes a sprig of flowers arranged against a ground. Olive is a leafy twig set against very dark browns and purples and then given a square black edge around the picture frame. Trompette II is similarly constructed with a lily in the centre and a light blue and ochre ground banded by a grey rectangle. Likewise Heart shows a lily, though this time the flower is pushed towards the bottom of the canvas and five representations of a heart are lined up across the top of the picture (à la Jasper Johns). It is a motif which Donnelly has used before with potatoes, and this time the use of the popular representation of the heart is presumably a contribution to what he means in his statement accompanying the exhibition when he implies that he is playing with general associations. The heart, the olive branch or the Madonna are innocent enough symbols, and when the shape of a real heart appears in Heart it too is set in the heavy ground of purples and blacks and framed in a black square. The symbol of romantic love turns into the real thing and just as there is an invitation to contemplate the lily as a madonna, underlying the lily is how we have sublimated all sorts of associations which are less palatable.

The image which is new to Donnelly’s repertoire is that of the Giant’s Causeway. It appears in the two largest paintings as a picture postcard image, and almost as small as one, in the centre of each canvas, surrounded by beds of flowers. In Causeway I the bulk of the picture surface is very active with lilies in different sizes, and a trompe l’oeil Giant’s Causeway scene contradicting the rest of the picture surface. In Causeway II a sort of aerial view of the rock formation is loosely painted down the sides of the canvas in what is not far off the actual size of the rock, which again is in contradiction to the picture postcard scene in the centre. In between, the flower-bed, and far-off aerial views of the Causeway are seen from yet different perspectives. It seems that Donnelly is playing with the total familiarity of the Giant’s Causeway as the prevalent scenic image of Northern Ireland and the extent to which this image permeates memories and associations – for the majority, at least, from the North who will have visited this tourist attraction. In other words, the Giant’s Causeway, like the lily, is an image common to most, and while, on the one hand it is a symbol, it manages to draw other associations because of its familiarity. So too in Lilies, where Donnelly combines the rock formation with lilies, the romantic heart shape and the shillelagh – another of his motifs from past work. This occurs again in Light Flowers, where two large flowers are played off against potatoes which seem to fly across the picture surface. The potato has many resonances from Irish History but it also has personal associations between garden and kitchen.

There is, then, a strong element of the common touch about these paintings. They take the common-place in Irish culture but they also attempt to make an individual experience of it in this framing device of setting each object in its own space. By virtue of this there is an emphasis on how each object is painted, and I think it is at this point that a certain ‘déjà vu’ sets in; for there is a limit to the interest to be gained from the relationship between figure and ground. The construction of these paintings tends to be basic, and however much Donnelly tries out different perspective views in some of the larger canvases, they are still the same combinations of elements. One would like to see in his work something less predictable emerge from the construction of the image.