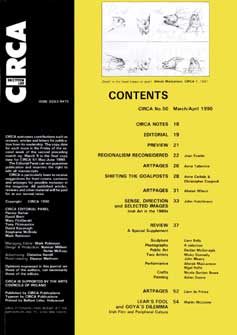 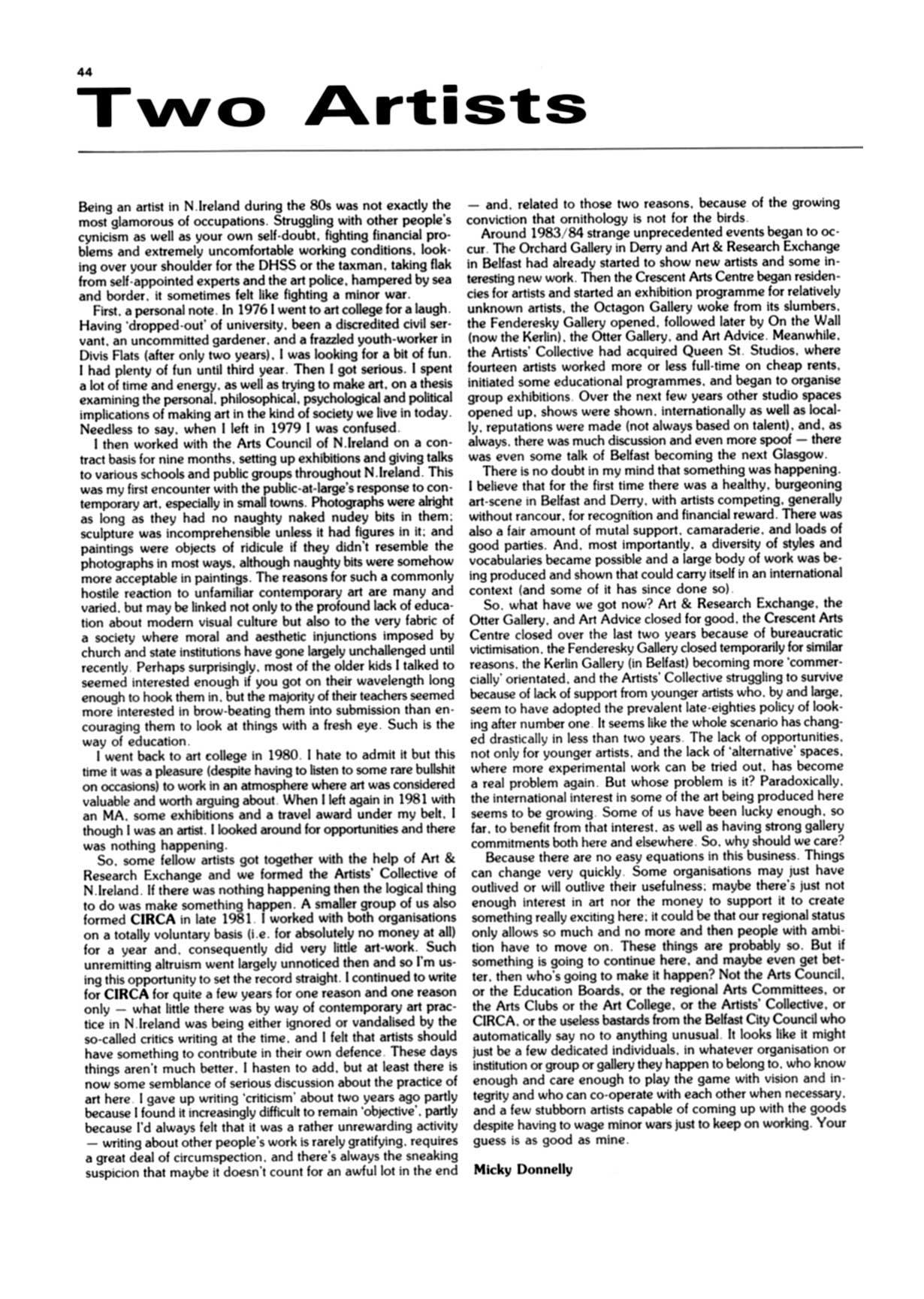 Being an artist in N Ireland during the 80s was not exactly the most glamorous of occupations. Struggling with other people’s cynicism as well as your own self doubt, fighting financial problems and extremely uncomfortable working conditions, looking over your shoulder for the DHSS or the taxman, taking flak from self-appointed experts and the art police, hampered by sea and border, it sometimes felt like fighting a minor war.

First, a personal note. In 1976 I went to art college for a laugh. Having dropped-out of university, been a discredited civil servant, an uncommitted gardener, and a frazzled youth-worker in Divis Flats (after only two years). I was looking for a bit of fun. I had plenty of fun until third year. Then I got serious. I spent a lot of time and energy, as well as trying to make art, on a thesis examining the personal, philosophical, psychological and political implications of making art in the kind of society we live in today. Needless to say, when I left in 1979 I was confused.

I then worked with the Arts Council of N. Ireland on a contract basis for nine months, setting up exhibitions and giving talks to various schools and public groups throughout N. Ireland. This was my first encounter with the public-at-large’s response to contemporary art, especially in small towns. Photographs were alright as long as they had no naughty naked nudey bits in them, sculpture was incomprehensible unless it had figures in it; and paintings were objects of ridicule if they didn’t resemble the photographs in most ways, although naughty bits were somehow more acceptable in paintings. The reasons for such a commonly hostile reaction to unfamiliar contemporary art are many and varied, but may be linked not only to the profound lack of education about modern visual culture but also to the very fabric of a society where moral and aesthetic injunctions imposed by church and state institutions have gone largely unchallenged until recently. Perhaps surprisingly, most of the older kids I talked to seemed interested enough if you got on their wavelength long enough to hook them in, but the majority of their teachers seemed more interested in brow-beating them into submission than encouraging them to look at things with a fresh eye. Such is the way of education.

I went back to art college in 1980. I hate to admit it but this time it was a pleasure (despite having to listen to some rare bullshit on occasions) to work in an atmosphere where art was considered valuable and worth arguing about. When I left again in 1981 with an MA, some exhibitions and a travel award under my belt, I though I was an artist. I looked around for opportunities and there was nothing happening.

So, some fellow artists got together with the help of Art & Research Exchange and we formed the Artists’ Collective of N Ireland. If there was nothing happening then the logical thing to do was make something happen. A smaller group of us also formed CIRCA in late 1981. I worked with both organisations on a totally voluntary basis (i e. for absolutely no money at all) for a year and, consequently did very little art-work. Such unremitting altruism went largely unnoticed then and so I’m using this opportunity to set the record straight. I continued to write for CIRCA for quite a few years for one reason and one reason only — what little there was by way of contemporary art practice in N. Ireland was being either ignored or vandalised by the so-called critics writing at the time, and I felt that artists should have something to contribute in their own defence. These days things aren’t much better, I hasten to add, but at least there is now some semblance of serious discussion about the practice of art here. I gave up writing ‘criticism’ about two years ago partly because I found it increasingly difficult to remain ‘objective’, partly because I’d always felt that it was a rather unrewarding activity — writing about other people’s work is rarely gratifying, requires a great deal of circumspection, and there’s always the sneaking suspicion that maybe it doesn’t count for an awful lot in the end — and, related to those two reasons, because of the growing conviction that ornithology is not for the birds.

Around 1983 / 84 strange unprecedented events began to occur. The Orchard Gallery in Derry and Art & Research Exchange in Belfast had already started to show new artists and some interesting new work. Then the Crescent Arts Centre began residencies for artists and started an exhibition programme for relatively unknown artists, the Octagon Gallery woke from its slumbers, the Fenderesky Gallery opened, followed later by On the Wall (now the Kerlin), the Otter Gallery, and Art Advice. Meanwhile, the Artists’ Collective had acquired Queen St Studios, where fourteen artists worked more or less full time on cheap rents, initiated some educational programmes, and began to organise group exhibitions. Over the next few years other studio spaces opened up, shows were shown, internationally as well as locally, reputations were made (not always based on talent), and, as always, there was much discussion and even more spoof — there was even some talk of Belfast becoming the next Glasgow. There is no doubt in my mind that something was happening. I believe that for the first time there was a healthy, burgeoning art-scene in Belfast and Derry, with artists competing, generally without rancour, for recognition and financial reward. There was also a fair amount of mutual support, camaraderie, and loads of good parties. And, most importantly, a diversity of styles and vocabularies became possible and a large body of work was being produced and shown that could carry itself in an international context (and some of it has since done so).

So, what have we got now? Art & Research Exchange, the Otter Gallery, and Art Advice closed for good, the Crescent Arts Centre closed over the last two years because of bureaucratic victimisation, the Fenderesky Gallery closed temporarily for similar reasons, the Kerlin Gallery (in Belfast) becoming more ’commercially’ orientated, and the Artists’ Collective struggling to survive because of lack of support from younger artists who, by and large, seem to have adopted the prevalent late-eighties policy of looking after number one. It seems like the whole scenario has changed drastically in less than two years. The lack of opportunities, not only for younger artists, and the lack of alternative’ spaces, where more experimental work can be tried out. has become a real problem again. But whose problem is it? Paradoxically, the international interest in some of the art being produced here seems to be growing. Some of us have been lucky enough, so far, to benefit from that interest, as well as having strong gallery commitments both here and elsewhere. So, why should we care?

Because there are no easy equations in this business. Things can change very quickly. Some organisations may just have outlived or will outlive their usefulness; maybe there’s just not enough interest in art nor the money to support it to create something really exciting here, it could be that our regional status only allows so much and no more and then people with ambition have to move on. These things are probably so. But if something is going to continue here, and maybe even get better, then who’s going to make it happen? Not the Arts Council, or the Education Boards, or the regional Arts Committees, or the Arts Clubs or the Art College, or the Artists’ Collective, or CIRCA, or the useless bastards from the Belfast City Council who automatically say no to anything unusual. It looks like it might just be a few dedicated individuals, in whatever organisation or institution or group or gallery they happen to belong to, who know enough and care enough to play the game with vision and integrity and who can co-operate with each other when necessary, and a few stubborn artists capable of coming up with the goods despite having to wage minor wars just to keep on working. Your guess is as good as mine.

Originally published in CIRCA Issue #50 – March/April 1990