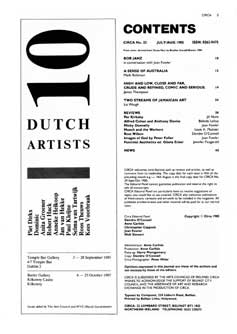 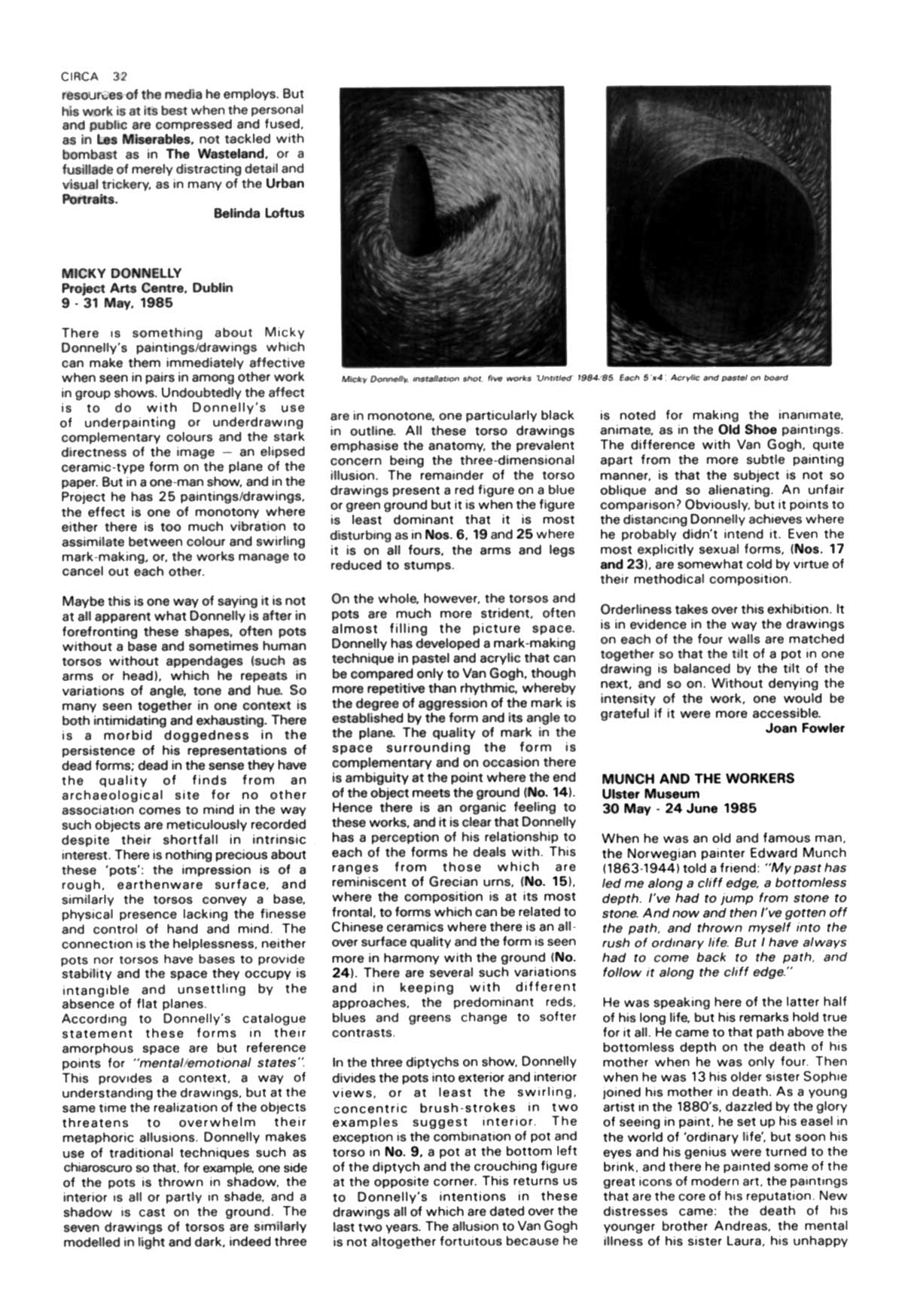 There is something about Micky Donnelly’s paintings / drawings which can make them immediately effective when seen in pairs in among other work in group shows. Undoubtedly the effect is to do with Donnelly’s use of underpainting or underdrawing complementary colours and the stark directness of the image — an ellipsed ceramic-type form on the plane of the paper. But in a one-man show, and in the Project, he has 25 paintings / drawings, the effect is one of monotony where either there is too much vibration to assimilate between colour and swirling mark-making, or, the works manage to cancel out each other.

Maybe this is one way of saying it is not at all apparent what Donnelly is after in forefronting these shapes, often pots without a base and sometimes human torsos without appendages (such as arms or head), which he repeats in variations of angle, tone and hue. So many seen together in one context is both intimidating and exhausting. There is a morbid doggedness in the persistence of his representations of dead forms; dead in the sense they have the quality of finds from an archaeological site for no other association comes to mind in the way such objects are meticulously recorded despite their shortfall in intrinsic interest. There is nothing precious about these ‘pots’: the impression is of a rough, earthenware surface, and similarly the torsos convey a base, physical presence lacking the finesse and control of hand and mind. The connection is the helplessness, neither pots nor torsos have bases to provide stability and the space they occupy is intangible and unsettling by the absence of flat planes.

According to Donnelly’s catalogue statement these forms in their amorphous space are but reference points for “mental / emotional states”. This provides a context, a way of understanding the drawings, but at the same time the realization of the objects threatens to overwhelm their metaphoric allusions. Donnelly makes use of traditional techniques such as chiaroscuro so that, for example, one side of the pots is thrown in shadow, the interior is all or partly in shade, and a shadow is cast on the ground. The seven drawings of torsos are similarly modelled in light and dark, indeed three are in monotone, one particularly black in outline All these torso drawings emphasise the anatomy, the prevalent concern being the three dimensional illusion. The remainder of the torso drawings present a red figure on a blue or green ground but it is when the figure is least dominant that it is most disturbing as in Nos 6, 19 and 25 where it is on all fours, the arms and legs reduced to stumps.

On the whole, however, the torsos and pots are much more strident, often almost filling the picture space. Donnelly has developed a mark-making technique in pastel and acrylic that can be compared only to Van Gogh, though more repetitive than rhythmic, whereby the degree of aggression of the mark is established by the form and its angle to the plane. The quality of mark in the space surrounding the form is complementary and on occasion there is ambiguity at the point where the end of the object meets the ground (No. 14). Hence there is an organic feeling to these works, and it is clear that Donnelly has a perception of his relationship to each of the forms he deals with. This ranges from those which are reminiscent of Grecian urns (No. 15), where the composition is at its most frontal, to forms which can be related to Chinese ceramics where there is an all-over surface quality and the form is seen more in harmony with the ground (No. 24). There are several such variations and in keeping with different approaches, the predominant reds, blues and greens change to softer contrasts.

In the three diptychs on show, Donnelly divides the pots into exterior and interior views, or at least the swirling, concentric brush-strokes in two examples suggest interior. The exception is the combination of pot and torso in No. 9, a pot at the bottom left of the diptych and the crouching figure at the opposite corner. This returns us to Donnelly’s intentions in these drawings all of which are dated over the last two years. The allusion to Van Gogh is not altogether fortuitous because he is noted for making the inanimate, animate, as in the Old Shoe paintings. The difference with Van Gogh, quite apart from the more subtle painting manner, is that the subject is not so oblique and so alienating. An unfair comparison? Obviously, but it points to the distancing Donnelly achieves where he probably didn’t intend it. Even the most explicitly sexual forms. (Nos. 17 and 23), are somewhat cold by virtue of their methodical composition.

Orderliness takes over this exhibition. It is in evidence in the way the drawings on each of the four walls are matched together so that the tilt of a pot in one drawing is balanced by the tilt of the next, and so on. Without denying the intensity of the work, one would be grateful if it were more accessible.

Originally published in CIRCA Issue #23 – July/August 1985