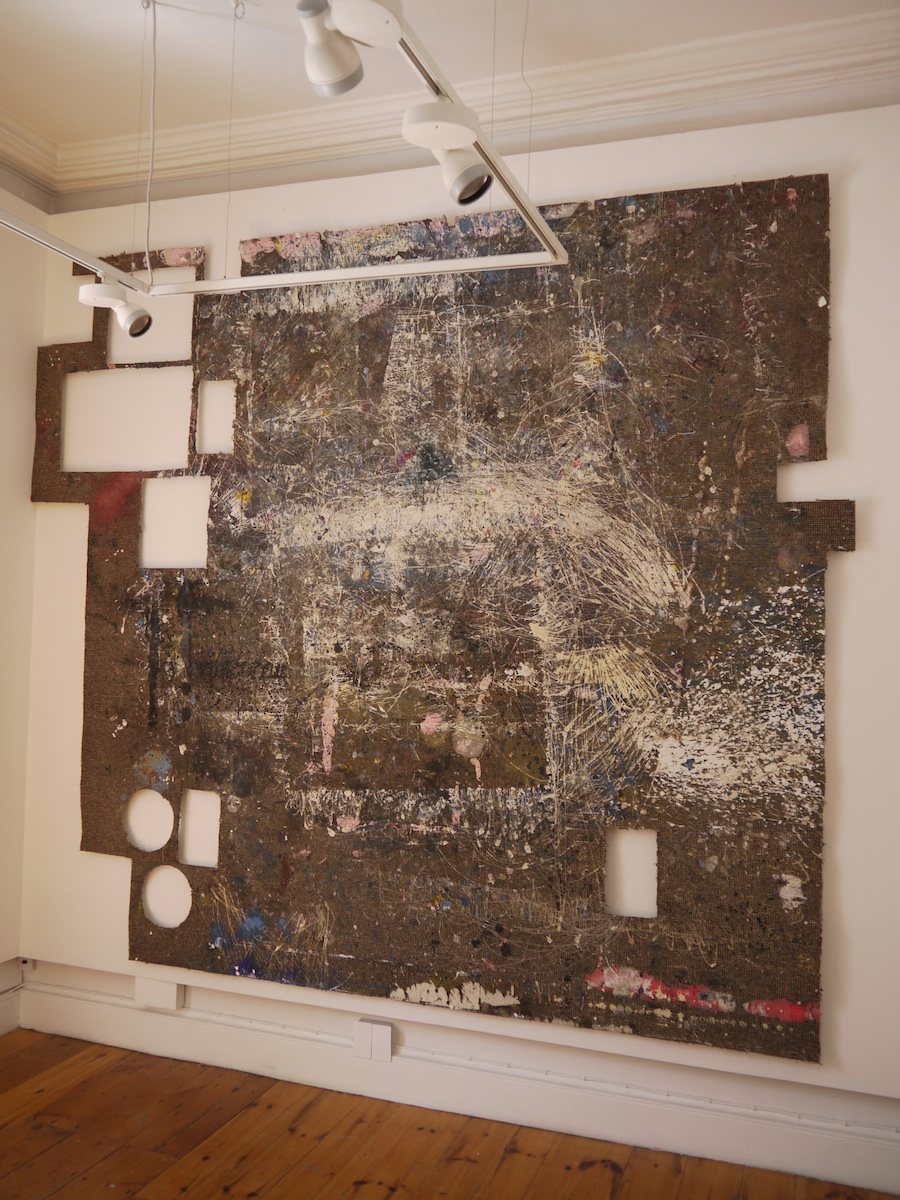 Luke Monaghan, The Confident Messenger, image courtesy of the writer.

Occupying one wall, The Confident Messenger by Luke Monaghan presents a mix of house paint and acrylic on carpet. There are also small sections cut out, definite shapes which offer absence as a question. This casual simplicity continues with the wooden slats which structure and secure the work to the wall. Whether house paints or acrylics, paint is presented as an expressive medium. We stand face to face with the flecks and smudges, splodges and what might even be footprints: all set down over time. Altogether these patterns of occurrence reveal a cosmic formula, known to us as accident, and commonly found in art.

If there is a picture then it’s a mental one, appearing as an action, or rather a series of actions and then one final leap. In the picture conjured, the artist lifts the carpet from the floor of his studio, to have it re-installed on the wall of a public gallery. This particular carpet cutting bears the lost marks of a painting practice, the splashes and flicks which dried crisp outside of the frame. It is only when the floor becomes the painter’s new ground that these same marks take on the mechanics of the framed image, and even then it is not a pictorial message that we receive, or anything which is merely decorative, but instead it is a gesture which delivers focus. Created perhaps over the duration of a term, it is only fitting that this final-year piece shares visual similarities with the long-exposure photograph, the sort used to chart the path of stars amongst galaxies. If the machine weave of this cheap but hard-wearing carpet has captured anything of the spark of creative impulse, the artist has in turn rephrased it for the gallery experience and presented us with a fair chance to see what he did.

Allowing us to review what has occurred out of sight and out of mind, the character of this work is especially in tune with the contemporary heartbeat. The host of public campaigns which address human behaviour beyond cultural norms and at times laws have revealed countless examples of a community as an expression of its values. The most recent example of this might be the abortion referendum, which helped to bring forward the shared experiences of individuals not best served by that particular system. Equally, Monaghan was not alone in seeking to re-mediate collective or personal experience as a material in itself. Throughout the exhibition, new and old mediums recall distinct undertones of a past in suspension, providing us with the chance to reflect on what we share. The confident messenger carries this torch.