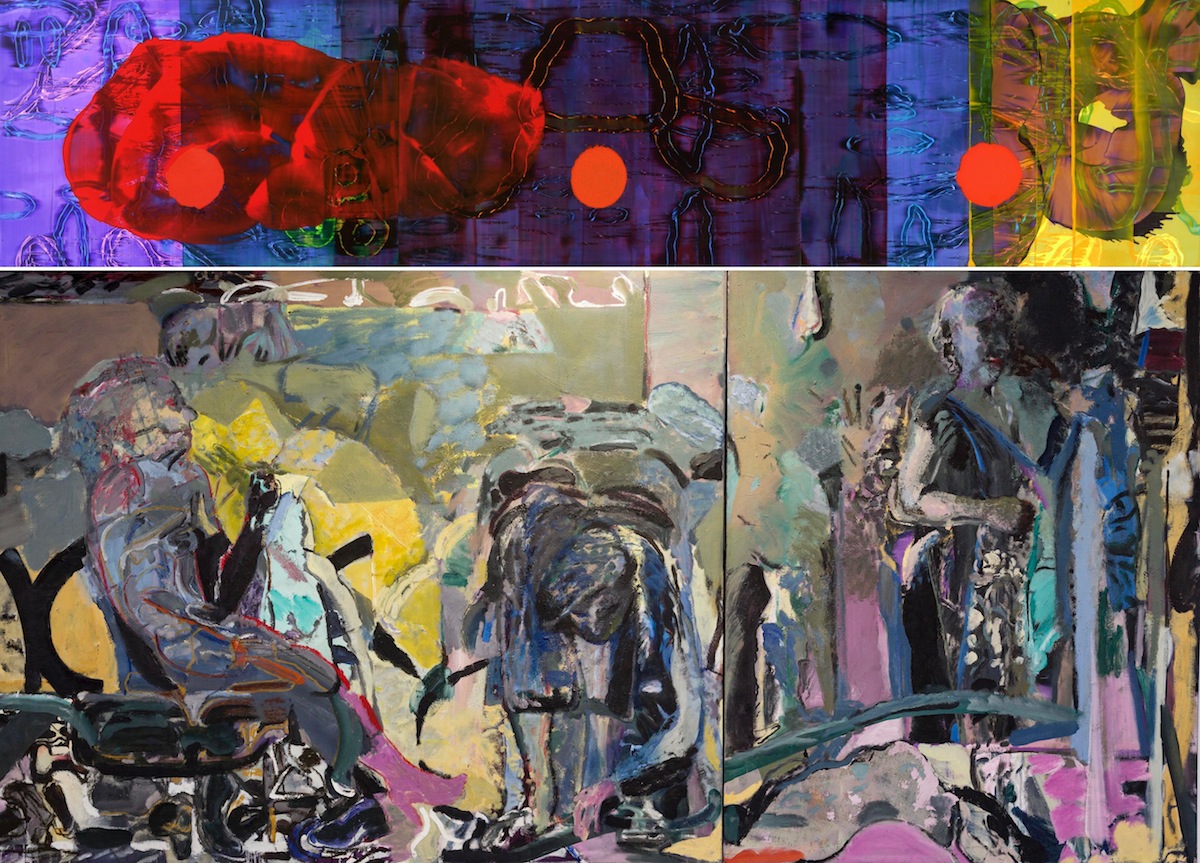 Making my way past the café’s lunchtime buzz I ascend to the upper galleries, which are devoid of life. Even the invigilator appears to have taken a hike.

As I pace the gallery space the floorboards creak beneath my feet. These incongruous sounds, like something contorting and contracting under an intolerable weight, mark the progress of my physical presence. Will the floorboards collapse and give the diners a rude awakening?

David Crone’s paintings appear as a series of eruptions and collisions, a relentless organic weaving in and out of intersections of cohabitation. Verging on disintegration, textural reserve and chromatic restraint crumble and fall apart, splintering into intoxicating visual revolt before sobering up in the cold light of representation and recognition.

John Cronin’s painterly virtuosity plots the terrain of hidden rendition. His imagery moves between, and attempts to evade, graphic associations. Recurring features – worms, slugs, slime trails, dots, wibbly wobbly doughnuts – are opened to introspection. Smears engulf and consume, distorting what are contested and potentially compromising interiorities. In the espionage of abstraction there is a relentless sifting of solid ground, the painter’s sleight of hand encoding something menacingly vibrant.

When I leave the RHA and turn onto Bells Lane I spot a blast from the past. Hunched over, wearing a navy trench coat with collar raised against the chill, the unmistakable figure of ex-Taoiseach Brian Cowen is making his way towards St Stephen’s Green.

His demeanour, with the ghost of Hume Street Hospital rearing up in the winter light, its rows of derelict basements giving off a musty hum, reminds me of something Francis Bacon or Chaim Soutine might have painted. There used to be a painting of Soutine’s in the National Gallery, of a man with a blank expression, dressed in funereal black, descending a flight of crocked stairs in a storm. The stairs looked like they were cut into the earth.

I should be feeling disdain but instead I feel a sense of sadness tinged with curiosity. Sadness for what has been lost, for what happens when the glitter leaves us cold. Curiosity about what it is that we have been through and where we are headed.

The paintings return to mind, their vaporous summits, in which so much has been invested, framed by sinkholes of blind indifference.