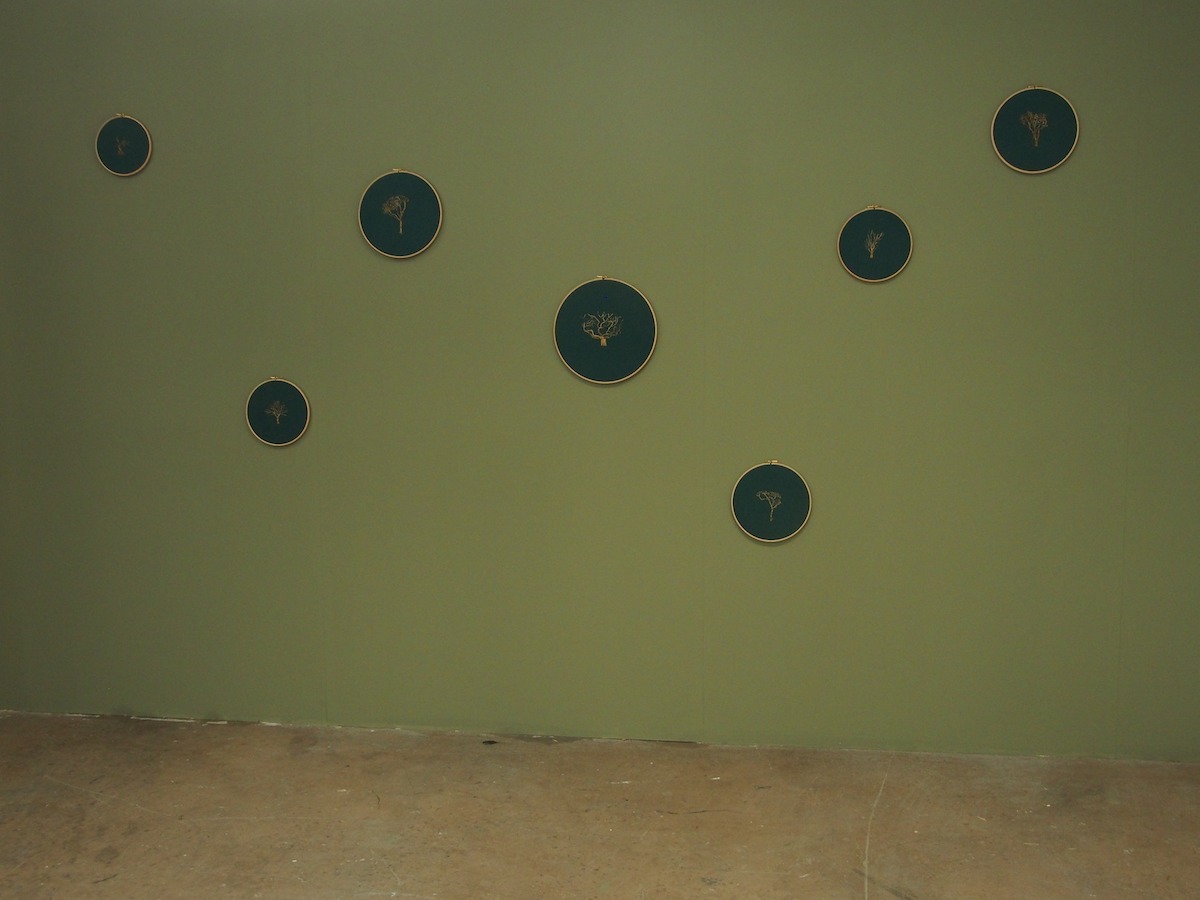 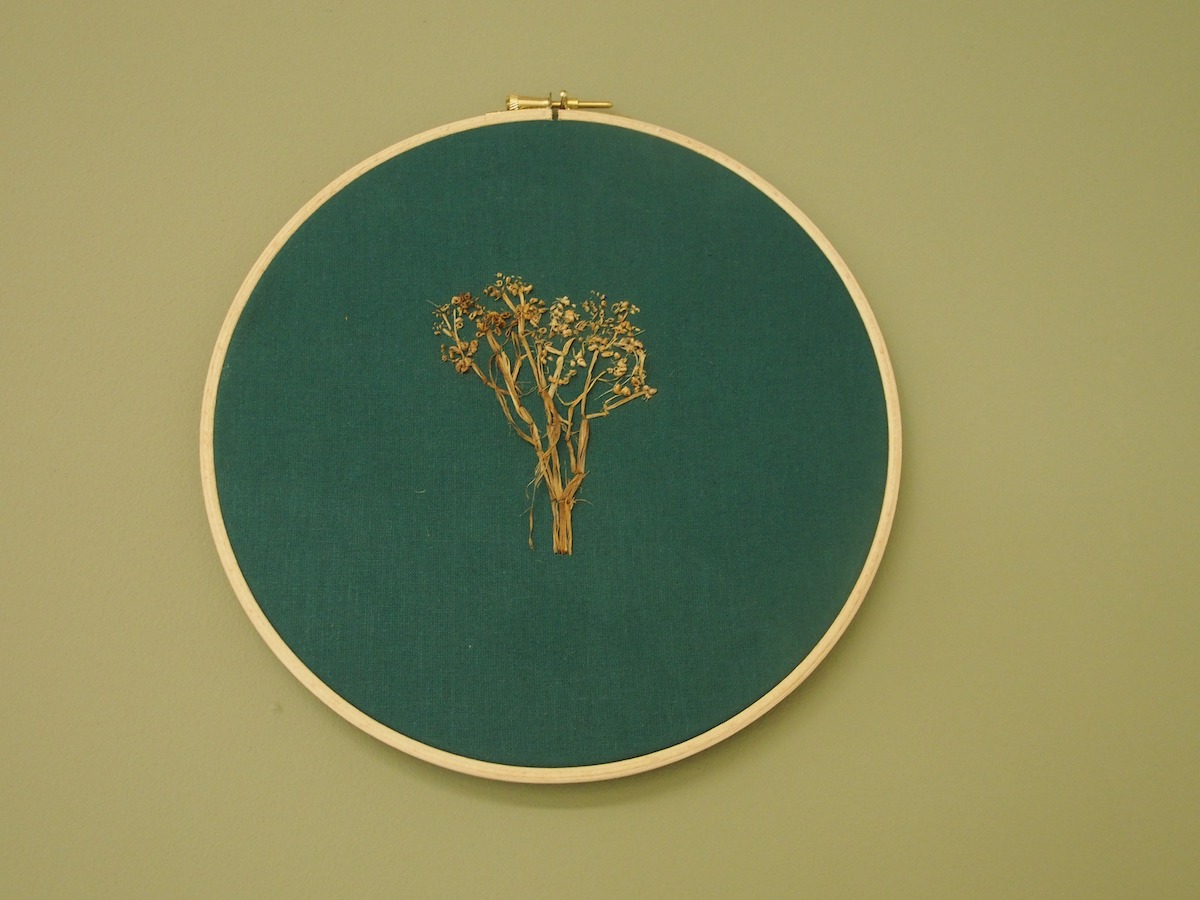 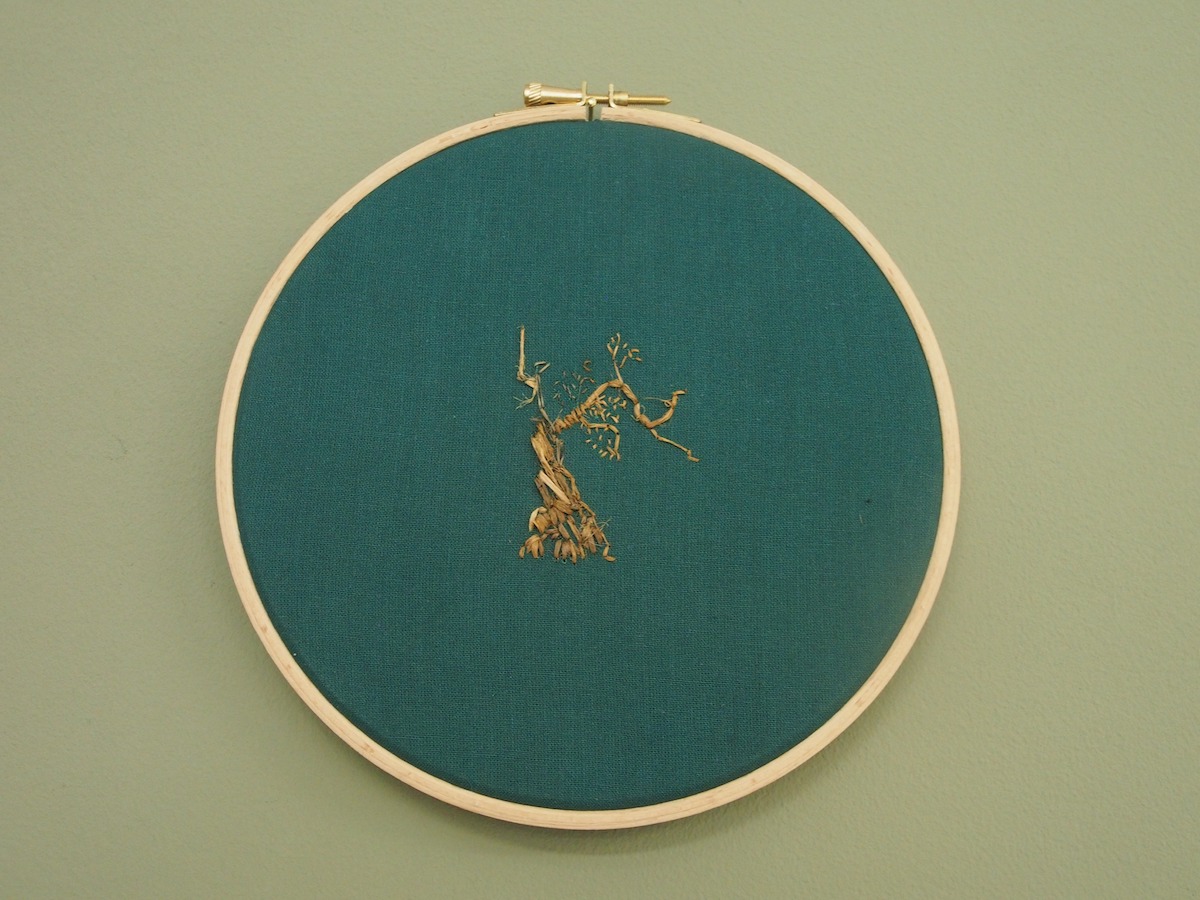 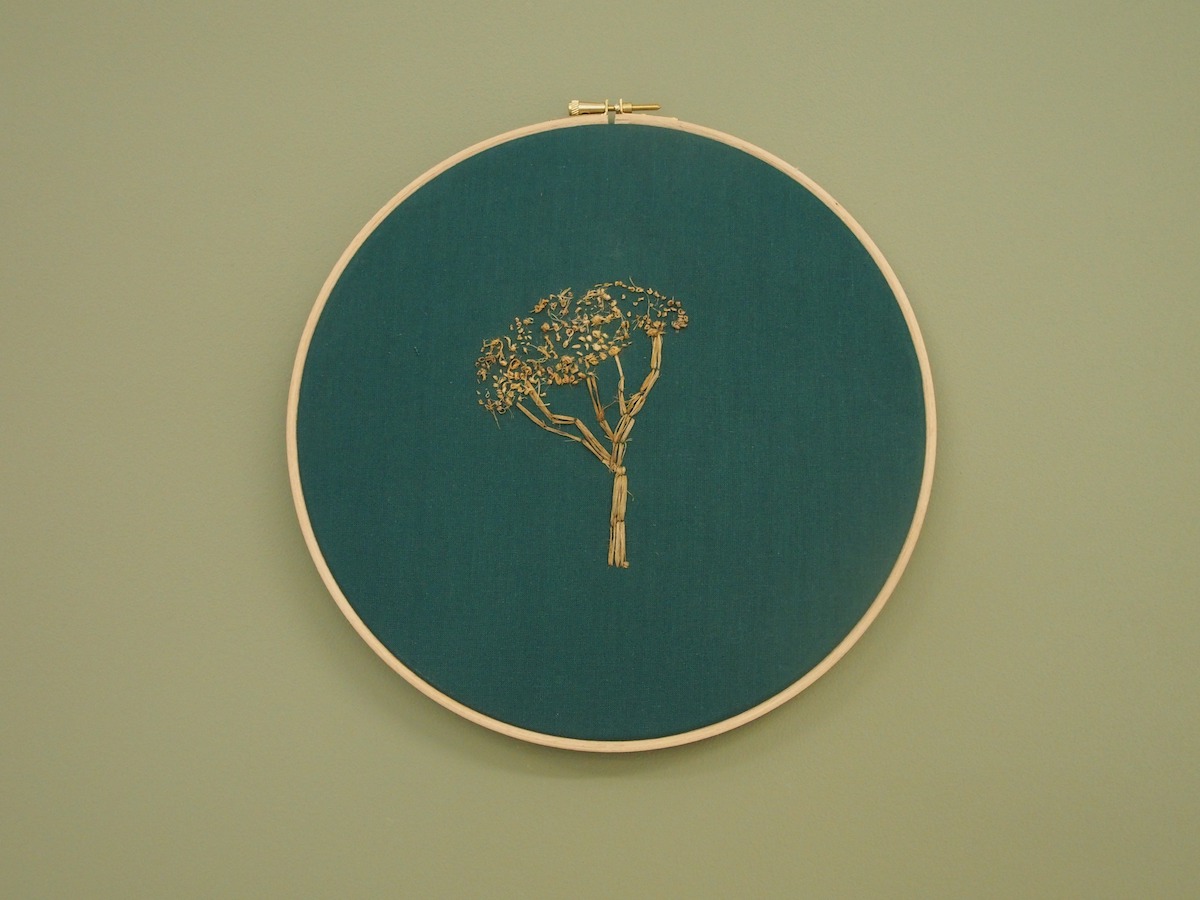 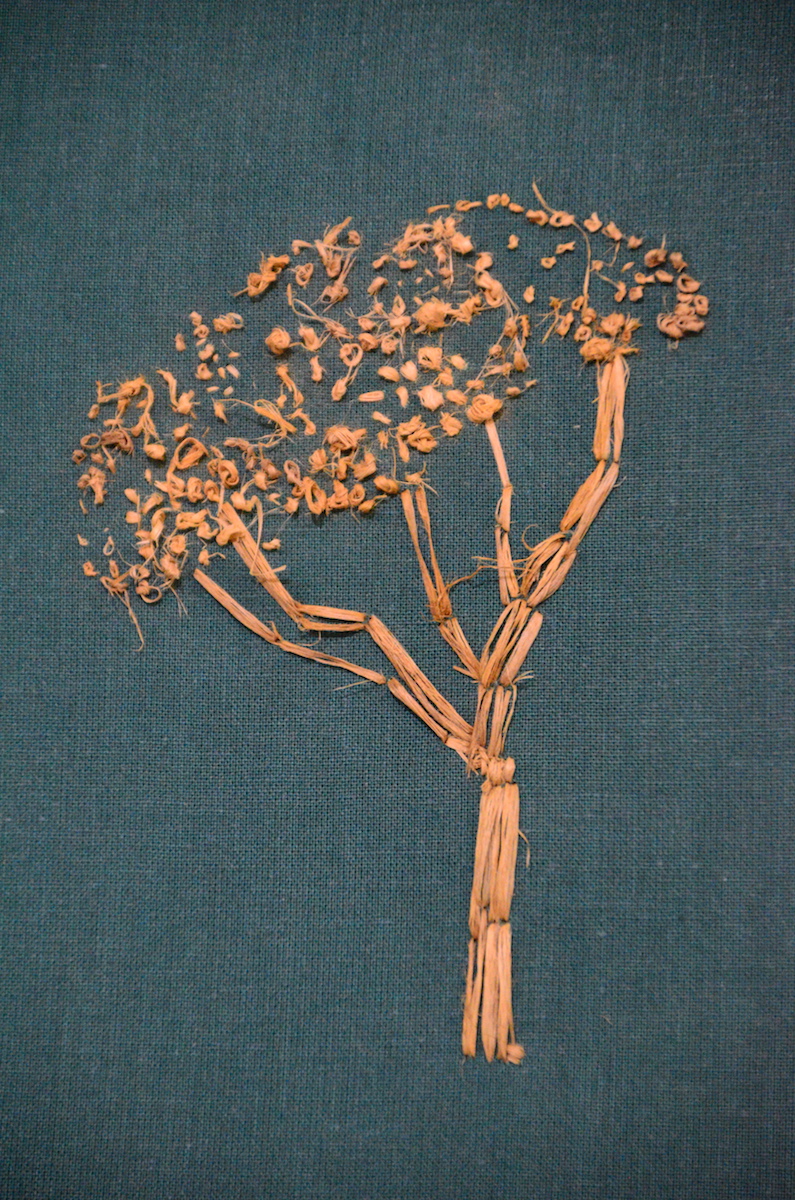 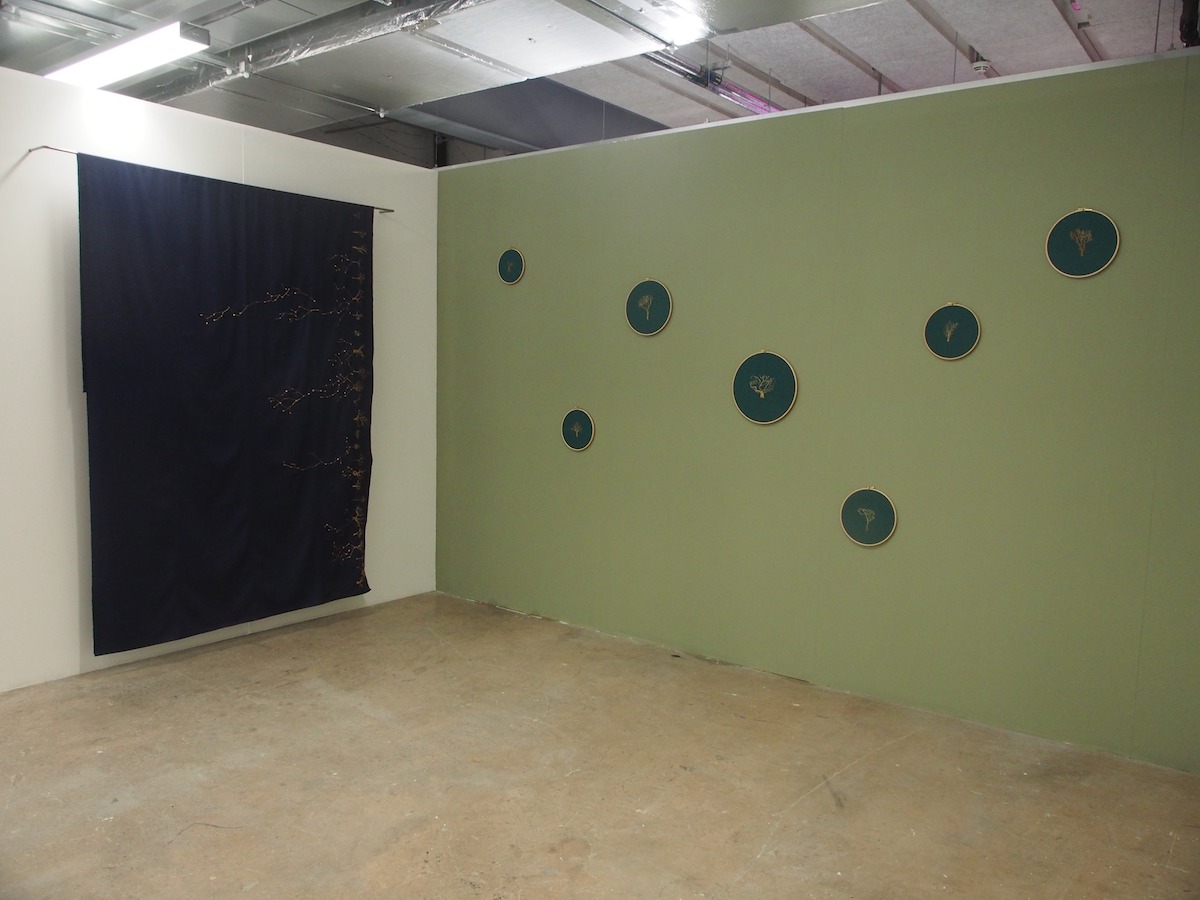 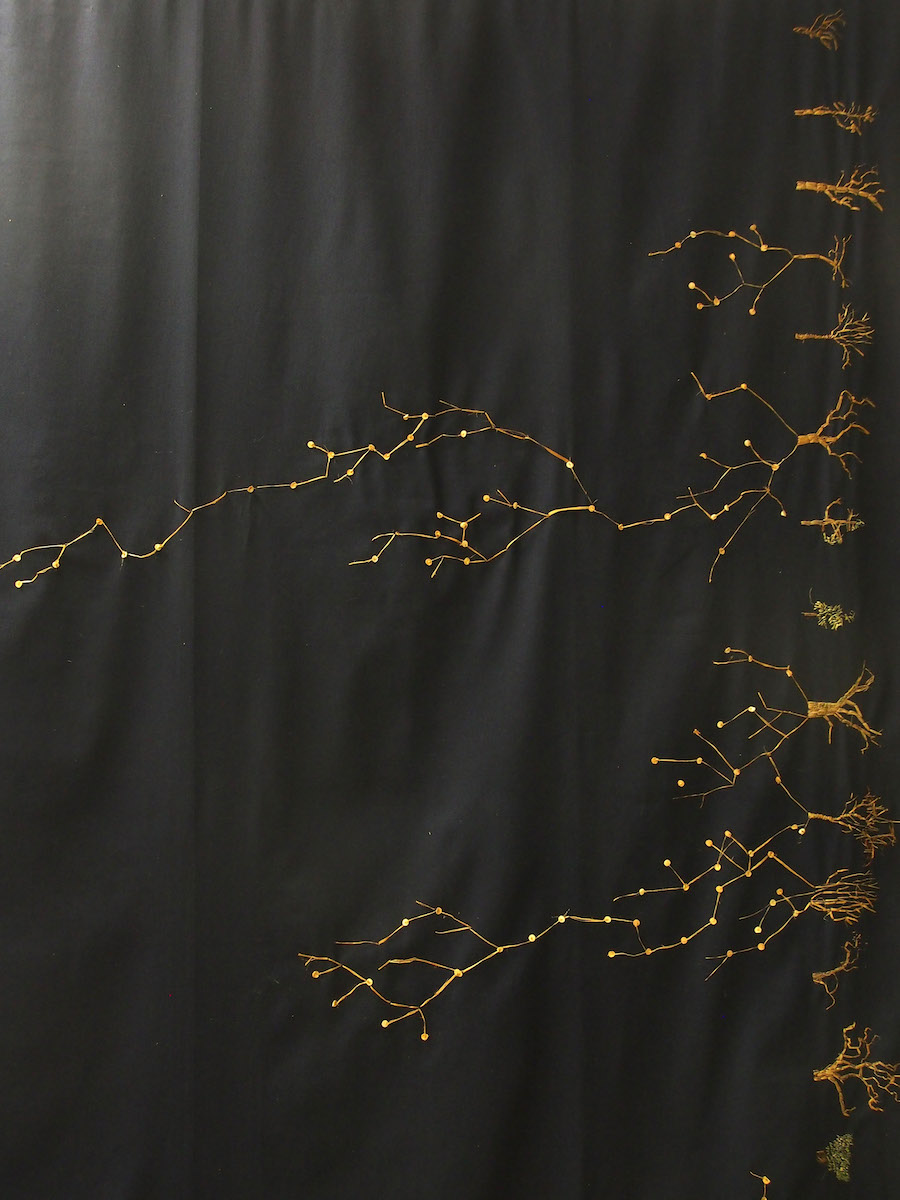 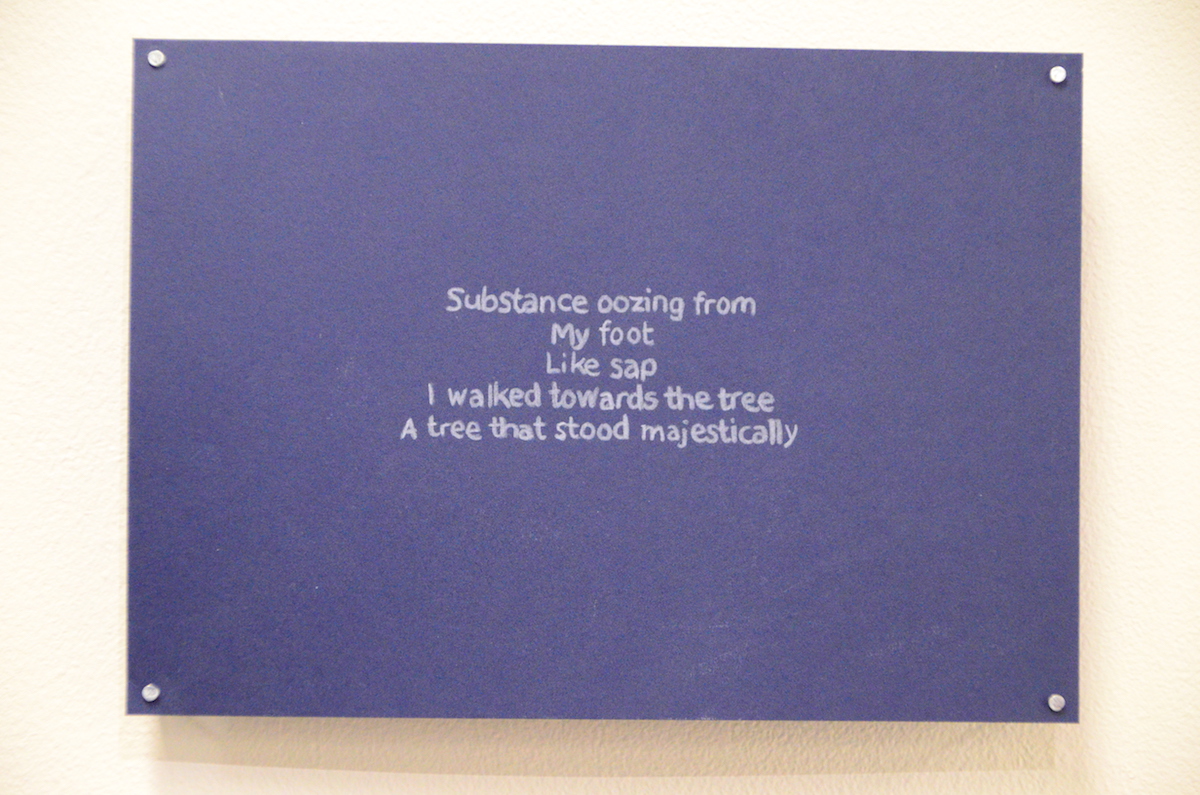 Saskia Lassmann’s MFA show features a large embroidered wall hanging, seven embroidered pieces stretched on tambours, and six textual pieces on board, that blend the idea of a tree as a symbol with the physical actuality of wood (bark in this case), and her own inner involvement with nature.

Lassmann creates her embroideries using fibres that she has made from tree bark. This is a significant aspect of her artistic thinking – she is acutely aware of the of the pure this-ness of the physical elements in her work, something that fundamentally affects its symbolic and perceptual aspects and is woven into its meaning.

The wall hanging holds a stylised landscape, rotated ninety degrees, so that the line of trees runs down one side. The visible root systems vary greatly in depth and complexity. Some trees have no roots at all, but most do, and in some cases the roots of adjacent trees are joined. Given that the trees are compact figures and the nodes marking the bifurcations in the network of roots resemble constellation charts, it is natural to read the trees as metaphor for the human condition, with the roots standing in for the cosmos – perhaps even a hint at Amor-fati. The overall symbolism then becomes an inversion of the Hermetic maxim ‘as above so below’.

The textual pieces could seem incidental, but actually the show, in the context of Lassmann’s overall practice, can be taken as a contemplation around writing. A visit to her website shows us that the individual trees could act as logographs like those in traditional Chinese texts. On the site we find an embryonic lexicon of tree-forms each partnered by a word or short phrase. Each tree standing as a glyph for an existential stance. Each phrase, like its partnered tree, is open, not a closed proposition but a suggestion of meaning. In the light of this one wonders if the row of trees in the wall hanging (arranged vertically like classic Chinese writing) might hint at an oracular reading, an I-Ching-like commentary on living in the cosmos.

Lassmann realises her work from a quiet and contemplative spirit, accepting images and materials from nature and composing them into a graceful assemblage that binds together symbol, percept and material actuality. Her work provides compelling evidence of a strong creative intelligence rooted in a heart of Romantic innocence, a rare combination in today’s art world.