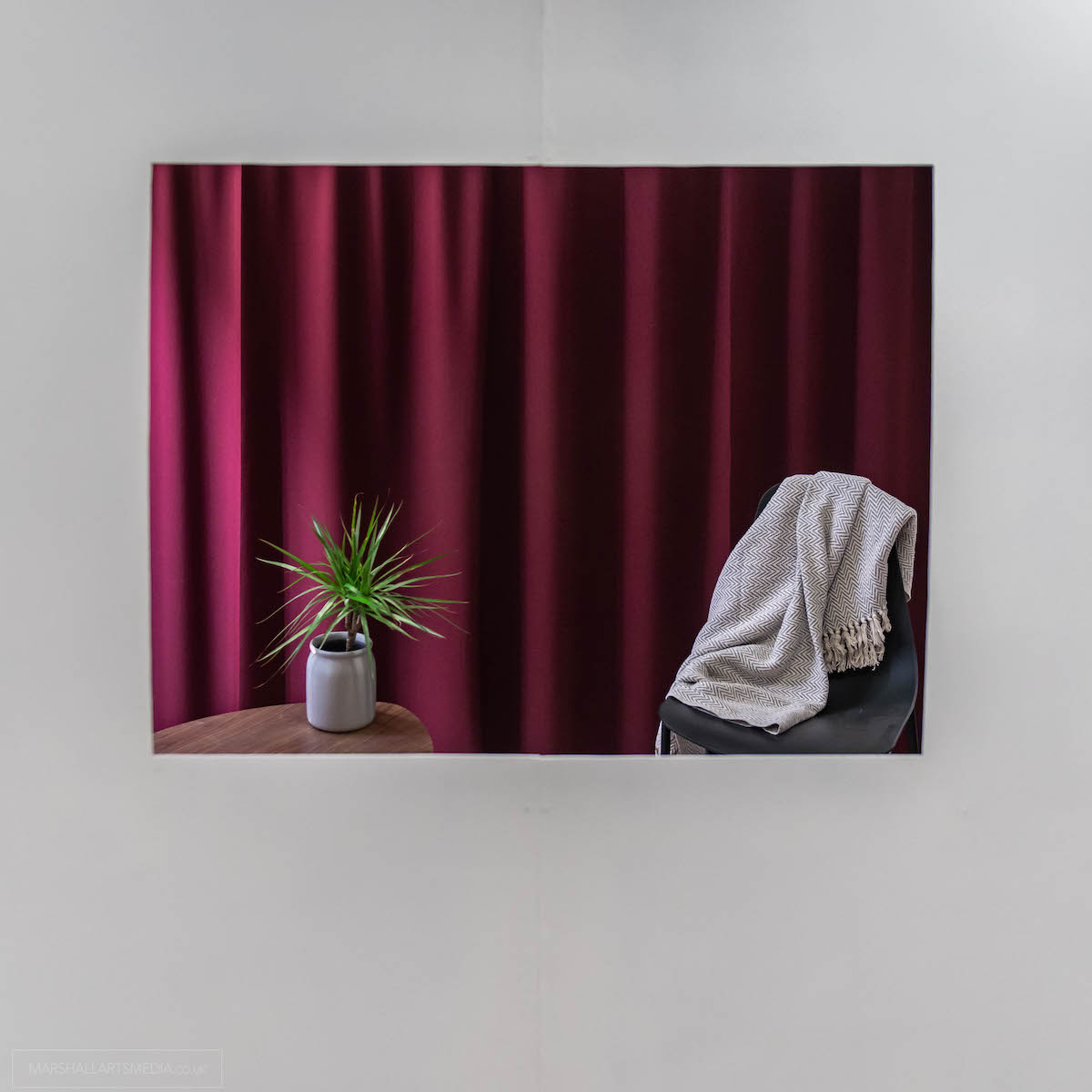 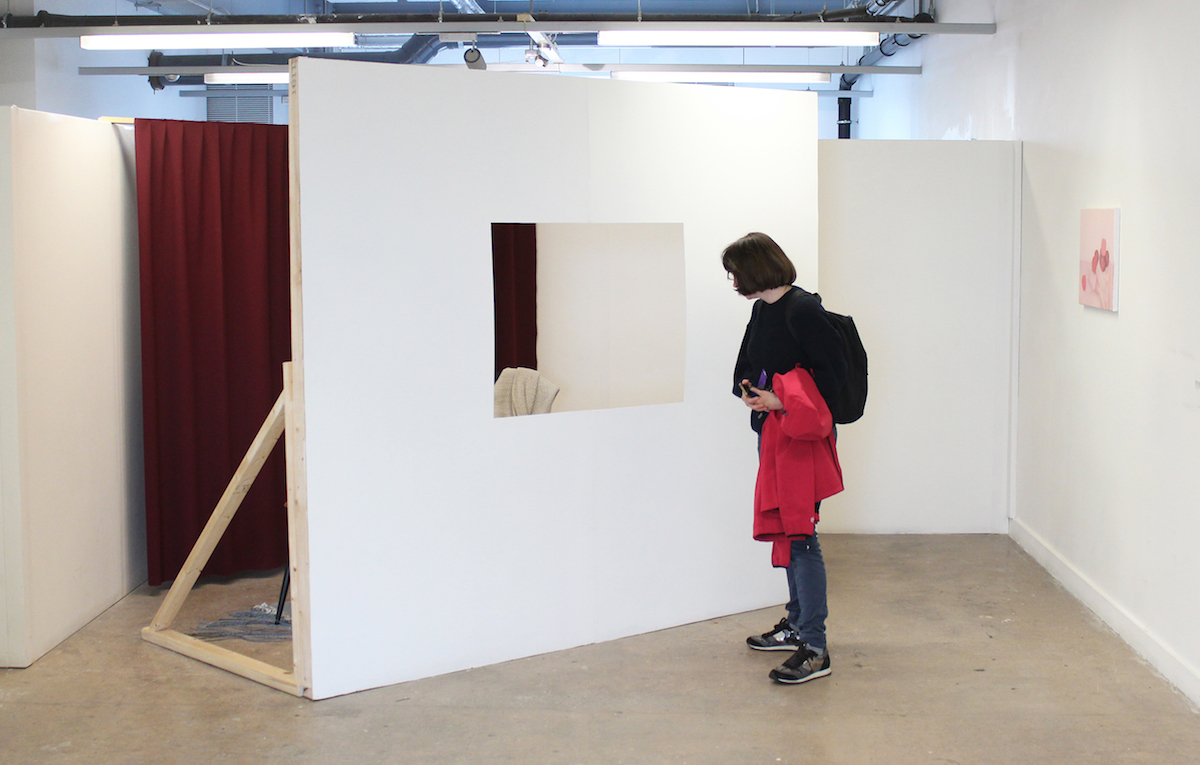 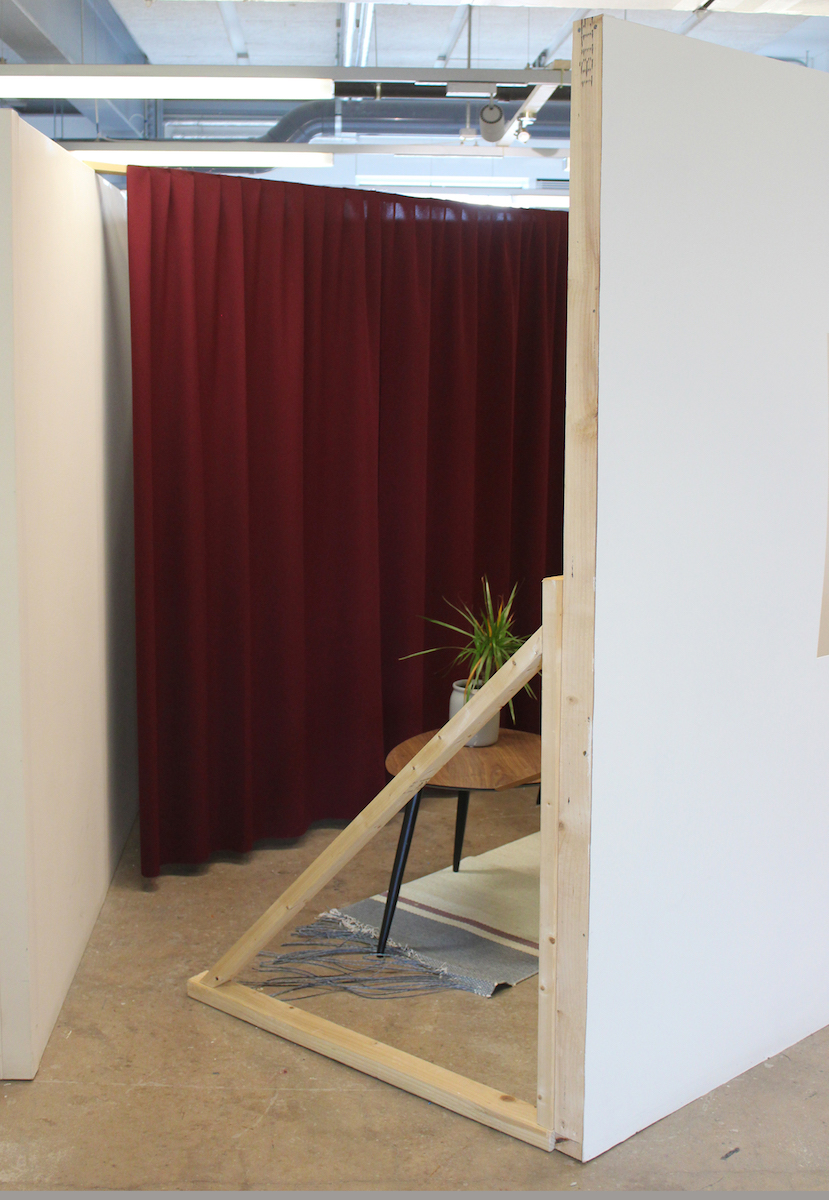 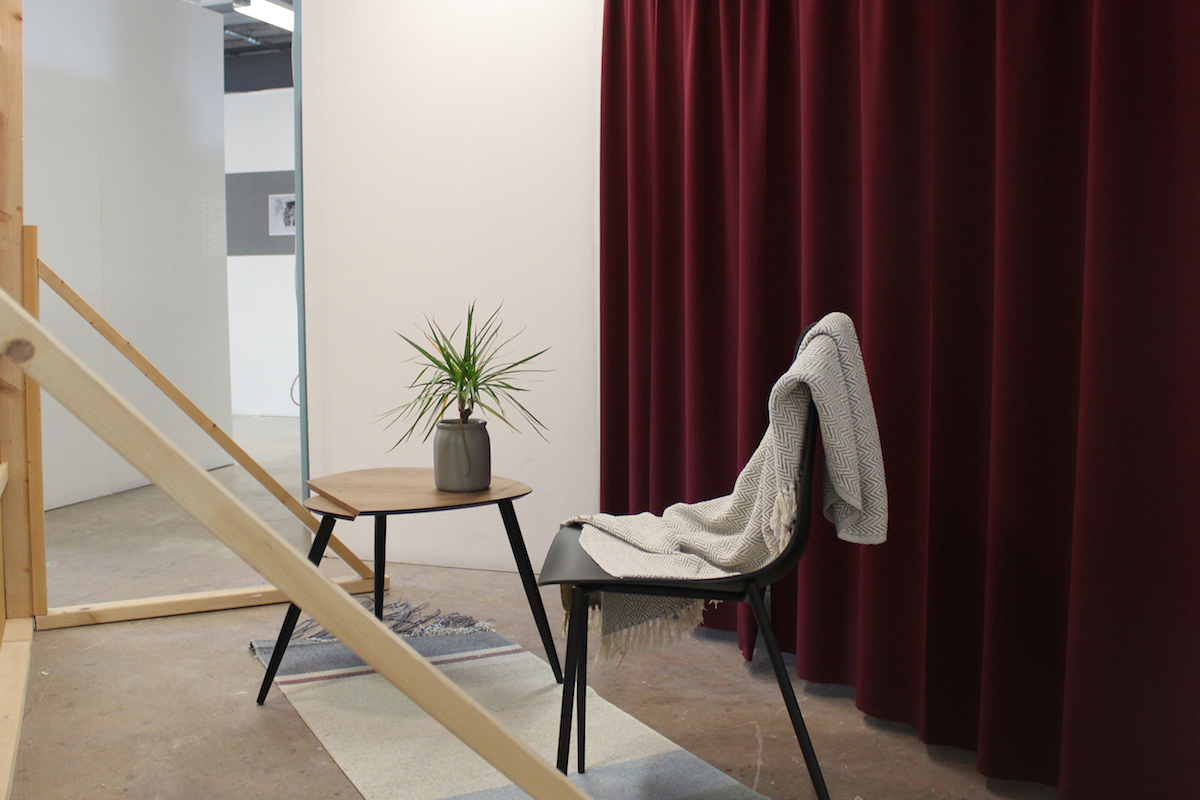 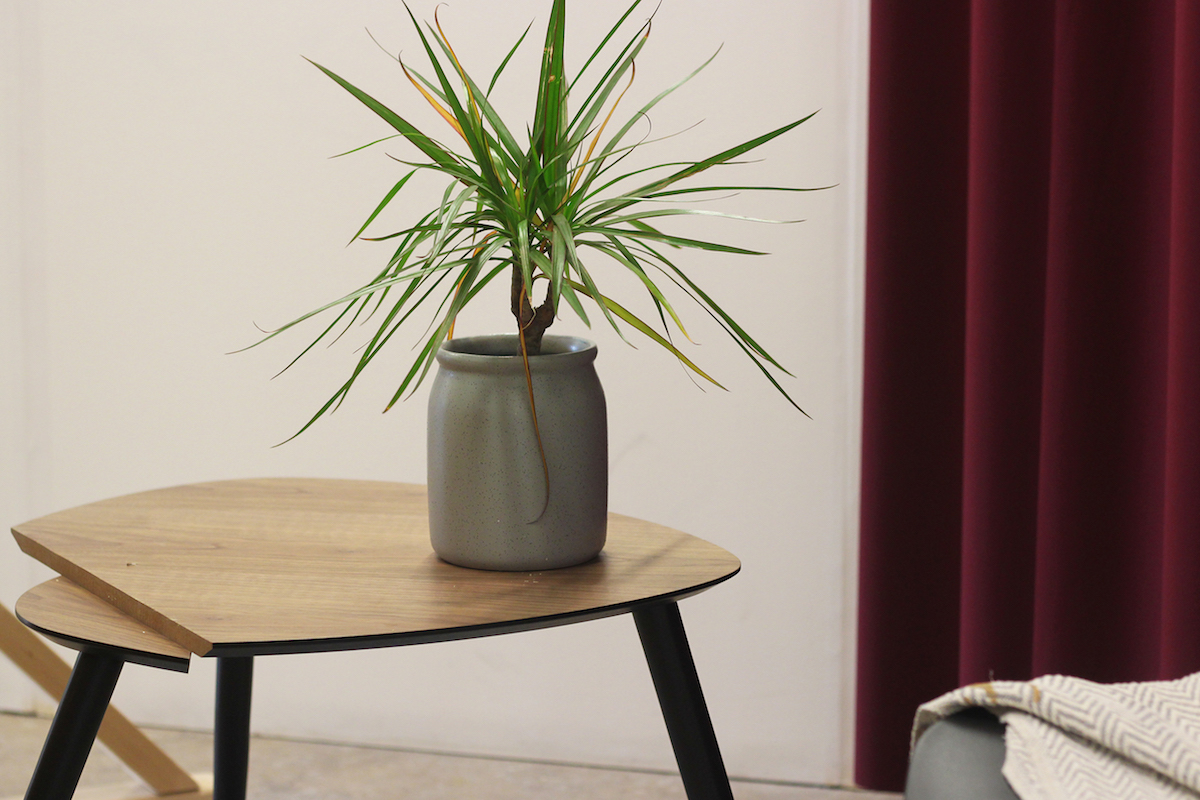 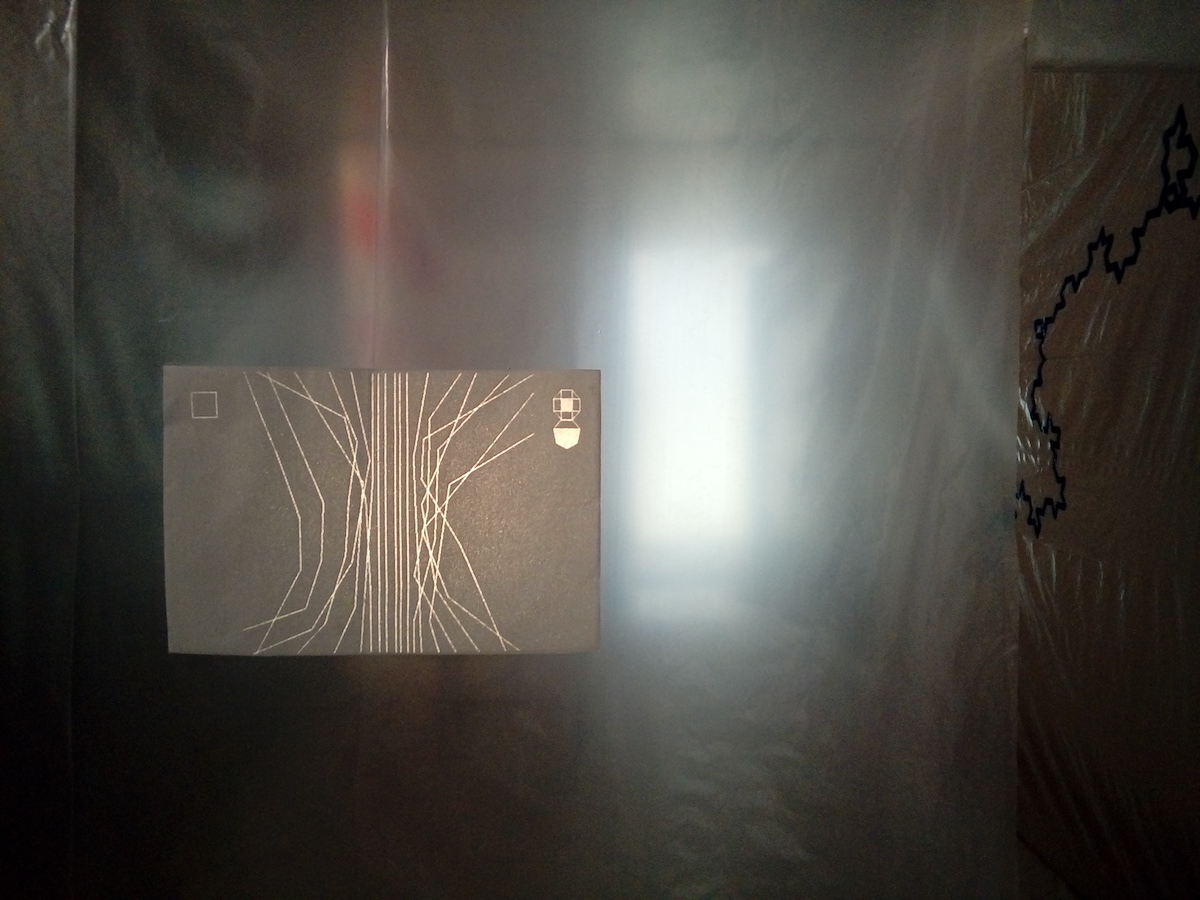 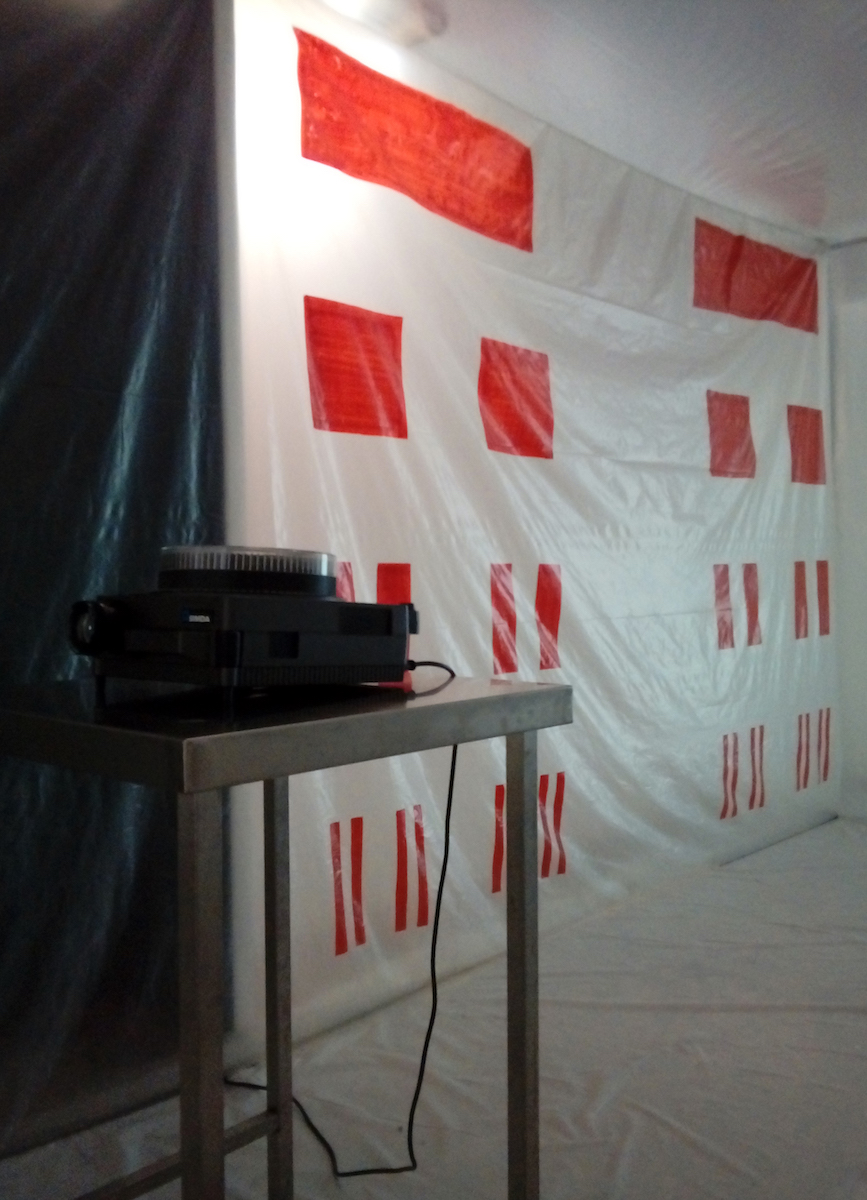 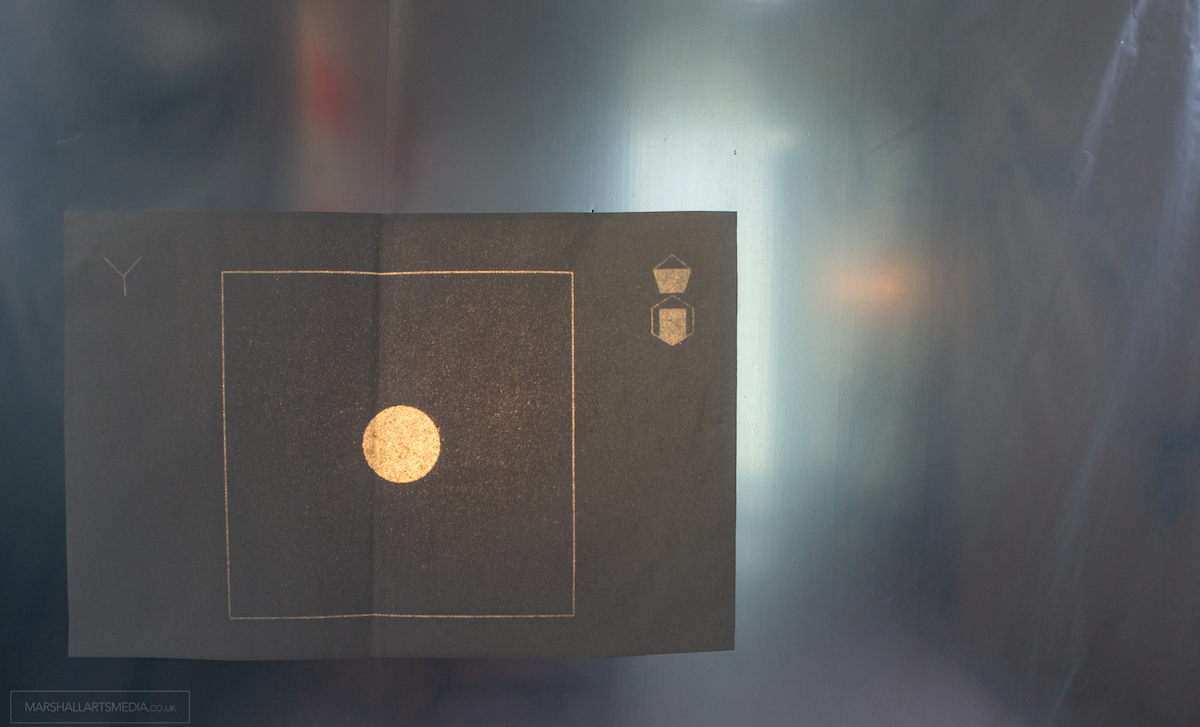 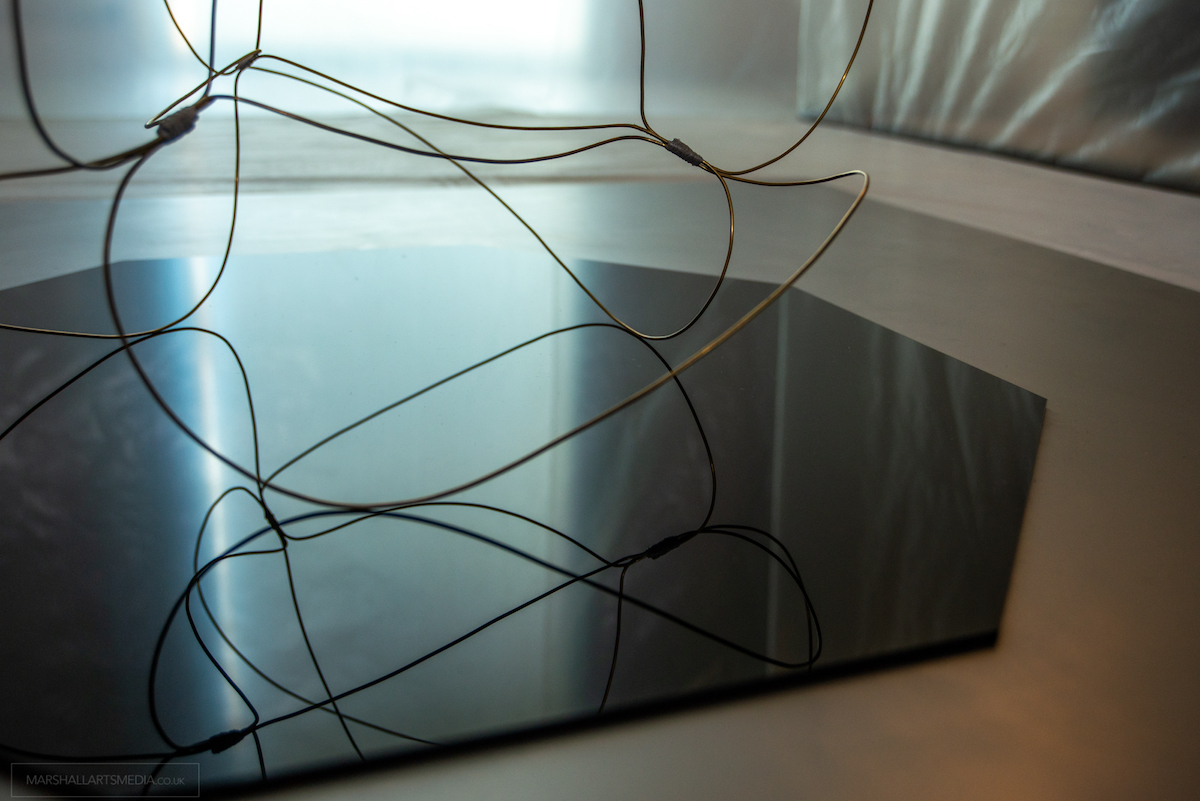 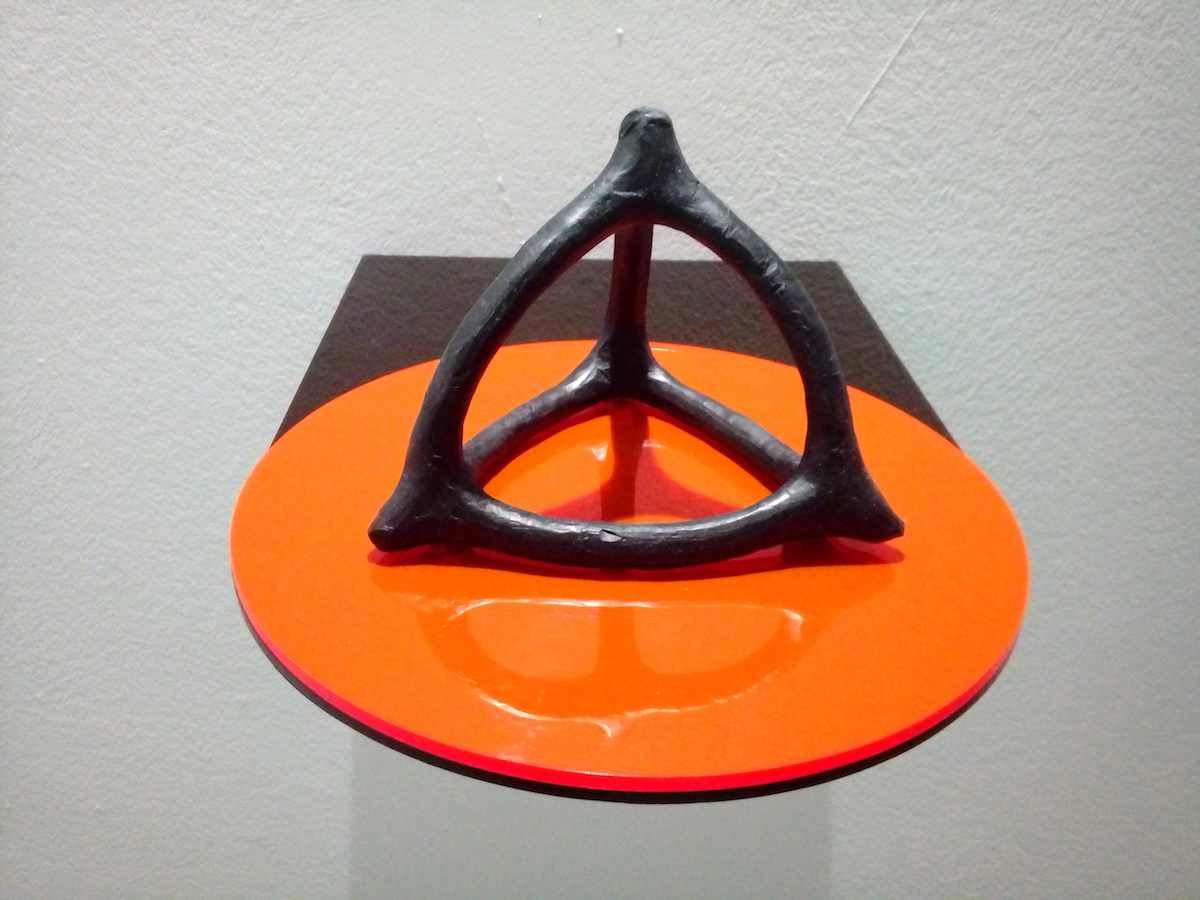 It starts with a fly. That too-warm room in a relatively-new-but-potentially-already-sick-building, a buzz (both literal and figurative) coming and going, untraceable amongst the always already information heavy degree show experience. But then there is a fly – a painted one, which disrupts in a more focused way. It’s rendered perfectly amidst a fruit bowl of otherwise only partly representative forms. Something isn’t right here.

A small group, the University of Ulster two-year MFA programme is comprised predominantly of wall-based work, with two notable exceptions.

Cathy Cannon’s Stilled is the first work that audiences encounter. In the artist’s own words, this work is “comprised of mundane furniture, bland carpet and plain white walls”, and presented as a stage or photographic set. On closer inspection, these components are tattered and stained. The solitary painting which complements/ complicates this presentation (which feels like the right word – something about it is forced), as described above, is equally stringent and weird.

The presence of the insect and the deceptively shabby materials contribute to the sense of dissociation; Cannon elaborates that “in many ways I believe this is my core conceptual belief.” Her treatment of materials is fluid, sticky, and tonally more 1970s than candy-coloured. It evokes a smell-memory – banal and abject – even though there isn’t one. The work is superficial in the best way – one that disrupts, transcends and interrogates a constructed narrative about who or what the subject is (whilst still in no doubt), referencing a feminist critical canon of power, patriarchy, psychoanalysis and perception.

Joey O’Gorman’s work is expansive: a room created from translucent polythene sheeting hosts a projector which whirs and clicks, a series of intricate and gently luminous line drawings indicate a path but not a direction, sculpture occupies both floor and wall space. The studio walls beyond the sheeting feature bold geometric forms, but the distance is such that these too are not easily read. The heat that accompanies every degree show here feels like a component in the work – an extension of unrelentingly shaping and breaking environments.

Of his work, O’Gorman says: “I am interested in de-privileging the human – we are neither separate from nor more special than all that is within and without – thereby questioning how we conceive of the individual and the locality of agency”. Referencing Donna Haraway, he emphasises that we, as a species, are “co-creative… non-humans are seen to act [;] nature and culture bleed into each other and our place in history is redrafted”.

They’re trying to tell us something – giving us enough clues to build a map, but to where or of what we are not originally sure. There’s something secular about both of these approaches – the historical references come thick and fast, but they’re more human, and messy, than prescriptive. Semiotics have clearly featured heavily in reading lists (across the board), but in these two approaches have manifested themselves in ways that feel gently tentative yet confident. Their tutelage – practices which negotiate landscape and liminality – echoes faintly.

These works leave me with things (#feels?). Superficially, and expanding upon their sense of the cinematic, they are about watching the ubiquitous makeshift medical tent scenes again – the othering entities – in everything from E.T. to Arrival. But some of them are also about sitting in discomfort, looking harder, trying better and feeling more. The overall impression is that these afterthoughts, and the residual-ness of these works, will continue to impact on my lived experience; echoing changes that I can’t yet make sense of.