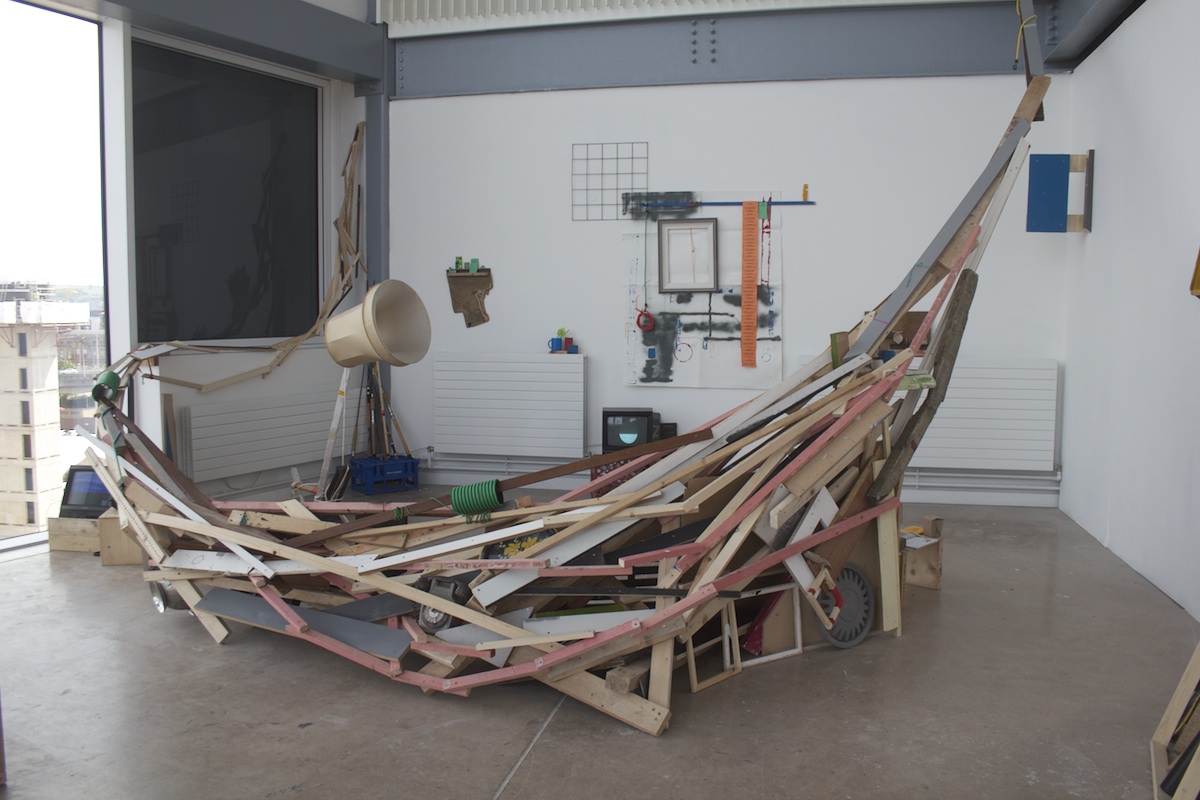 Niamh McCann’s Things in Conversation facilitates both a skilfully executed material impression, and a space of openly discursive association between objects. In re-purposing discarded wood and an array of found objects, McCann presents the installation as an outer sculptural form and an interior dimension of material dialogue. The outer sculpture orbits and in a sense feeds this inner space and the arrangements at home therein.

The outer form is a mass of contracting timber and found objects that proficiently orchestrates physical force. Standing like a monument to motion, it suggests an intuitive logic and a coming together of things mid transit. As such, it appears like a plethora of objects converging in some violent whirlwind or particle field, swept up in an elemental dance in which movement and stillness have made some precarious truce. At its uppermost material limit this splintering monster reaches the next floor of the building, almost declaring a coup against the unsuspecting painting department above. Rising as it does, it creates a space beneath, providing access to a series of smaller, contrastingly calm assemblages.

Aside from a shared material basis, these comparatively subtle arrangements vary significantly from the orbiting mass encircling them. More concerned with narrative, they exemplify with a playful vigour the prevalence of abstract association when dealing with even the simplest material arrangements and effortlessly demonstrate how these associations are further pluralised through memory.

Specific pieces resonate; a beautifully useless piece of broken furniture, mounted on the back wall, holds up a collection of green shaded objects. Among them, a carefully folded piece of paper, a pair of circuit boards that suggest jagged and hostile landmasses, a small Lego cityscape standing upright, and the rather sobering invoice card of a local gunmaker. Sitting on top this wooden board, the ensemble vibrates and chatters in different dialects of green.

Across the space, carefully composed on another wall, an ageing cabinet door plays host to a collage of shells and stones, ranging from the presumably discarded to the possibly sentimental.

Perched on top an old crate, a video loop sets rhythm and offers definition to memory through birdsong, crashing waves, and feet pounding on Belfast streets.

With the help of some scrap timber and an anchoring lump of metal, a lampshade has defiantly hoisted itself into the air. Standing up as a sort of gramophone, it seems to recite in the face of silence.