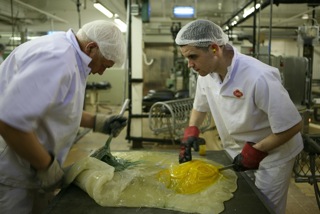 With Temperance we get to witness a cauldron of creation brimful of complexities, contradictions and dualities set in the context of an iconic Donegal sweet factory. The artist was in residence at the Oatfield Sweet Factory, Letterkenny, a long-established feature of the local landscape. In a series of photographs, sculptures, and a video piece O’Brien brings to the fore the usually hidden production processes behind confectionary-making, imbuing them with a certain spirituality and ruminating on mortality, morality and existence.

The installation infuses the everyday with the epic. There is an act of transubstantiation in which sugar, toffee and treacle are changed to membrane, mucus and sinew. Employees become surgeons, pathologists, biologists, even alchemists as they cut, divide, forge and flay in the act of creating. The fluids of industry become the fluids of life, as the artist, whilst documenting industrial life, goes much further in articulating an almost visceral mortality and exploring biographical concerns in regard to illness, the body and the status of women. 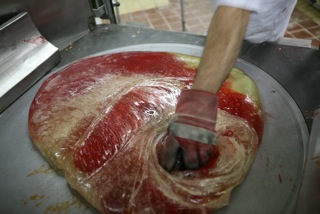 Though the body, and the female body in particular, is continually displayed in relation to ideals of beauty and sexuality, the ‘insides’ or raw material of a body are for most people quite upsetting and even starkly ugly reminders of dysfunction, hence the popularity of confectionary love-hearts and the like. Conversely there is a fascination with this dysfunction, as attested by numerous television medical programmes. When we see ‘hard-boiled’ confectionary body parts, laid out on dissecting tables, a liver and gallbladder on one, a brain and heart (a traditional duality of opposites) on another, we are at once attracted and repelled. One has the image of this sweet sugary stuff as integral bodily components working at once for and against bodily interests. The artist suffered a serious illness during this project, so the concept of organs working at once for and against the body seems very relevant. These confectionary spare parts, vital to but lonely when separated from the body, could also be a rather humorous comment on the traditional ‘pickling’ of brains that we see in the laboratories of mad scientists in horror movies. Indeed there is something alien and disturbing in the shapes in Species and the toffee rain of Slip. 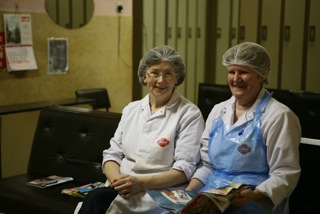 The vitality and materiality of the raw ingredients is very apparent, and O’Brien emphasises their sensuousness whilst reinforcing a bodily connectivity in works such as Adipose and Mesentery. This vitality is in contrast to the heavy black frames that work as a form of black bordering, reminding us of the interconnectivity of life and death. Indeed mortality is reinforced in works such as Corpus and Undertaking. This is further emphasised in a catalogue photograph, Heft, which has echoes of deposition painting, signifying the laying out of a body, though the white-costumed employees suggest medical personnel rather than mourners. 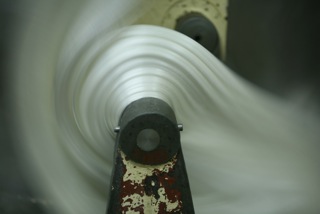 A confectionary factory is in itself a place of duality. Sweets are bad for you; they rot teeth, but they taste great. They add to life whilst taking away from it. The pleasures and pains of free will never more apparent. Though confectionary is a test of self-discipline, it is manufactured in a highly regulated environment to comply with health and safety regulations. O’Brien, in a humorous and quietly effective video piece, Good housekeeping, compares this explicit regulation with the social strictures placed upon women in particular by juxtaposing factory rules with meditations on female behaviour. This is reinforced in the Good girl/ bad girl works in which the artist captures the polar opposites in a centrifugal production process. The artist attributes somewhat feminine aspects to a number of the pieces, indeed titling one Silk. Likewise with the dark liquorice-like material in Taffeta 1 (taffeta is a silky material often used in female fashion.) Its elegant rolling waves in stark contrast to the mysterious and threatening dark pour of Syrup, which threatens us with potential overwhelming or indicates loss. A haemorrhaging or an invasion: harmful in equal measure. 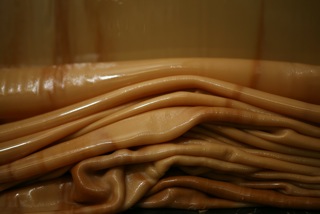 There is indeed, as the curator John M Cunningham observes, a sense of vitality and life, even spirituality in the articulation of the processes behind the confectionary production. We witness the vibrancy and mystery of creation as we gaze with wonder at the strange substances that somehow seem to turn to sweetness itself. However, this sweetness comes at a price, as O’Brien suggests in Fool’s gold. It is shadowed by decay and thus mortality. In an environment regulated by concerns over health and safety that produces traditional and much loved sweet(ness), the artist has successfully integrated the uncertainty that comes from awareness of the fragility of existence, when illness strikes, and subtly questioned the strictures that surround female life. 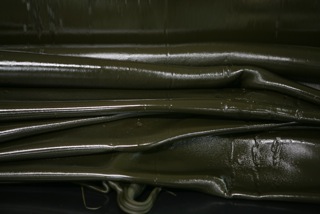 Gregory McCartney is the Project Co-ordinator of Abridged, the poetry/ art publication; an independent curator; a poet and PhD researcher.