This article by John Kelly first appeared in Art Monthly Australia in July 2009; it is reproduced with permission here. 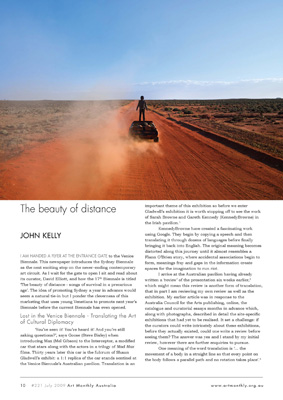 I AM HANDED A FLYER AT THE ENTRANCE GATE to the Venice Biennale. This newspaper introduces the Sydney Biennale as the next exciting stop on the never-ending contemporary art circuit. As I wait for the gate to open I sit and read about its curator David Elliott, and how the 17th Biennale is titled ‘The beauty of distance – songs of survival in a precarious age.’ The idea of promoting Sydney a year in advance would seem a natural tie-in but I ponder the clever cleverness of this marketing that uses young Venetians to promote next year’s Biennale before the current Biennale has even opened.

Lost in the Venice Biennale – Translating the Art of Cultural Diplomacy

‘You’ve seen it! You’ve heard it! And you’re still asking questions?’ says Goose (Steve Bisley) when when introducing Max (Mel Gibson) to the Interceptor, a modified car that stars along with the actors in a trilogy of Mad Max films. Gladwell’s exhibit: a 1:1 replica of the car stands sentinel at the Venice Biennale’s Australian pavilion. Translation is an important theme of this exhibition so before we enter Gladwell’s exhibition it is worth stopping off to see the work of Sarah Browne and Gareth Kennedy (KennedyBrowne) in the Irish pavilion. [1]

KennedyBrowne have created a fascinating work using Google. They begin by copying a speech and then translating it through dozens of languages before finally bringing it back into English. The original meaning becomes distorted along this journey until it almost resembles a Flann O’Brien story, where accidental associations begin to form, meanings fray and gaps in the information create spaces for the imagination to run riot.

I arrive at the Australian pavilion having already written a ‘review’ of the presentation six weeks earlier, [2] which might mean this review is another form of translation, that in part I am reviewing my own review as well as the exhibition. My earlier article was in response to the Australia Council for the Arts publishing, online, thecatalogue and curatorial essays months in advance which, along with photographs, described in detail the site-specific exhibitions that had yet to be realized. It set a challenge: if curators could write intricately about these exhibitions, before they actually existed, could one write a review before seeing them? The answer was yes and I stand by my initial review, however there are further enquiries to pursue. 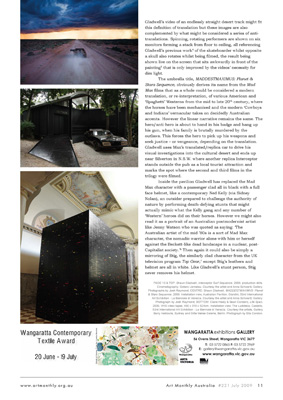 One meaning of the word translation is ‘… the movement of a body in a straight line so that every point on the body follows a parallel path and no rotation takes place.’ [3] Gladwell’s video of an endlessly straight desert track might fit this definition of translation but these images are also complemented by what might be considered a series of anti-translations. Spinning, rotating performers are shown on six monitors forming a stack from floor to ceiling, all referencing Gladwell’s previous work of the skateboarder whilst opposite a skull also rotates whilst being filmed, the result being shown live on the screen that sits awkwardly in front of the painting [5] that is only improved by the videos’ necessity for dim light.

The umbrella title, MADDESTMAXIMUS: Planet & Stars Sequence, obviously derives its name from the Mad Max films that as a whole could be considered a modern translation, or reinterpretation, of various American and ‘Spaghetti’ Westerns from the mid to late 20th-century, where the horses have been mechanised and the modern ‘Cowboys and Indians’ vernacular takes on decidedly Australian accents. However the linear narrative remains the same. The hero / anti-hero is about to hand in his badge and hang up his gun, when his family is brutally murdered by the outlaws. This forces the hero to pick up his weapons and seek justice – or vengeance, depending on the translation. Gladwell uses Max’s translated / replica car to drive his replica visual investigations into the cultural desert and ends up near Silverton in N.S.W. where another replica Interceptor stands outside the pub as a local tourist attraction and marks the spot where the second and third films in the trilogy were filmed.

Inside the pavilion Gladwell has replaced the Mad Max character with a passenger clad all in black with a full-face helmet, like a contemporary Ned Kelly (via Sidney Nolan), an outsider prepared to challenge the authority of nature by performing death defying stunts that might actually mimic what the Kelly gang and any number of ‘Western’ heroes did on their horses. However we might also read it as a portrait of an Australian postmodernist artist like Jenny W Watson who was quoted as saying: ‘The Australian artist of the mid ’80s is a sort of Mad Max character, the nomadic warrior alone with him or herself, against the Beckett-like dead landscape in a nuclear, post- Capitalist society.’ [6] Then again it could also be simply a mirroring of Stig, the similarly clad character from the UK television program Top Gear, [7] except Stig’s leathers and helmet are all in white. Like Gladwell’s stunt person, Stig never removes his helmet. 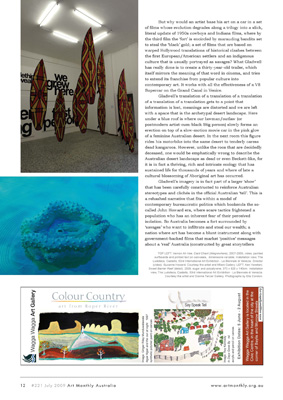 But why would an artist base his art on a car in a set of films whose evolution degrades along a trilogy into a slick, literal update of 1950s cowboys and Indians films, where by the third film the ‘fort’ is encircled by marauding bandits set to steal the ‘black’ gold; a set of films that are based on warped Hollywood translations of the historical clashes between the first European / American settlers and an indigenous culture that is usually portrayed as savages? What Gladwell has really done is to create a thirty-year-old trailer, which itself, mirrors the meaning of that word in cinema, and tries to extend its franchise from popular culture into contemporary art. It works with all the effectiveness of a V8 Supercar on the Grand Canal in Venice.

Gladwell’s imagery is in fact part of a larger ‘show’ that has been carefully constructed to fully reinforce Australian stereotypes and clichés in the official Australian ‘tell’. This is a rehashed narrative that fits within a model of contemporary bureaucratic politics which bookends the so-called John Howard era, where scare tactics frightened a population who has an inherent fear of their perceived isolation. So Australia becomes a fort surrounded by ‘savages’ who want to infiltrate and steal our weath; a nation where art has become a blunt instrument along with government-backed films that market ‘positive’ messages about a ‘real’ Australia (constructed by great storytellers such as Baz Lurhmann); a cultural desert where critical debate is stifled so the arts bureaucracy might prosper, and the art gangs take over the curatorial superhighway. 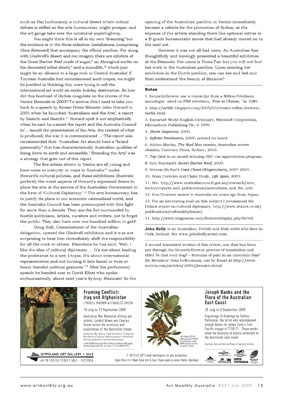 You might think this is all in my own ‘dreaming’ but the evidence is in the three sideshow installations (comprising Once Removed) that accompany the exhibition. For along with Gladwell’s desert and roo imagery there are exhibits of the Great Barrier Reef made of sugar, [8] an Aboriginal surfer on his decorated tribal shield, [9] and a monolith, [10] which just might be an allusion to a large rock in Central Australia! If Tourism Australia had commissioned such tropes, we might be justified in thinking they were trying to sell the international art world an exotic holiday destination. So how did this boatload of clichés coagulate on the shores of the Venice Biennale in 2009? To answer this I need to take you back to a speech by former Prime Minister John Howard in 2001 when he launched ‘Australians and the Arts’, a report by Saatchi and Saatchi. [11] Howard spelt it out emphatically when he said he wanted the report and the Australia Council to ‘… mould the presentation of the Arts, the content of what is produced, the way it is communicated …’ The report also recommended that: ‘Australian Art should have a “brand personality" that has characteristically Australian qualities of being down-to-earth and accessible.’ ‘Branding the Arts’ was a strategy that grew out of this report.

The five artists shown in Venice are all young and have come to maturity or come to Australia [12] under Howard’s cultural policies, and these exhibitions illustrate perfectly the worst aspects of Howard’s expressed desire to place the arts at the service of the Australian Government in the form of ‘Cultural Diplomacy’. [13] The arts bureaucracy has to justify its place in our economic rationalised world, and the Australian Council has been preoccupied with this fight for more than a decade. They are the fort surrounded by hostile politicians, artists, curators and writers, not to forget the public. They also have over one hundred million in gold!

Doug Hall, Commissioner of the Australian delegation, opened the Gladwell exhibition and it was not surprising to hear him immediately shift the responsibility for all the work to others. Elsewhere he has said: ‘Well, I like the idea of cultural diplomacy … It’s not about leading the proletariat to a new Utopia. It’s about international representation and not turning it into banal or twee or heavy-handed political gestures.’ [14] After his perfunctory speech he handed over to David Eliott who spoke enthusiastically about next year’s Sydney Biennale! So the opening of the Australian pavilion in Venice immediately became a vehicle for the promotion of Sydney at the expense of the artists standing there like optional extras in a B-grade bureaucratic movie that had already moved on to the next set.

However it was not all bad news. An Australian has thoughtfully and movingly presented a beautiful exhibition at the Biennale. Her name is Fiona Tan but you will not find her work in the Australian pavilion. Upon entering her exhibition in the Dutch pavilion, one can see and feel and then understand ‘the beauty of distance’!

1. KennedyBrowne use a transcript from a Milton Friedman monologue aired on PBS television, ‘Free to Choose Choose‘, in 1980.

13. For an interesting read on this subject I recommend the Demos report on cultural diplomacy: http://www.demos.co.uk/publications/culturaldiplomacy

John Kelly is an Australian, British and Irish artist who lives in Cork, Ireland. See www.johnkellyartist.com

A second translated version of this review, one that has been put through the KennedyBrowne process of translation and titled ‘Is that your dog? – A Biennale romance’ (by Monsieur Jean Kellouseau), can be found at here