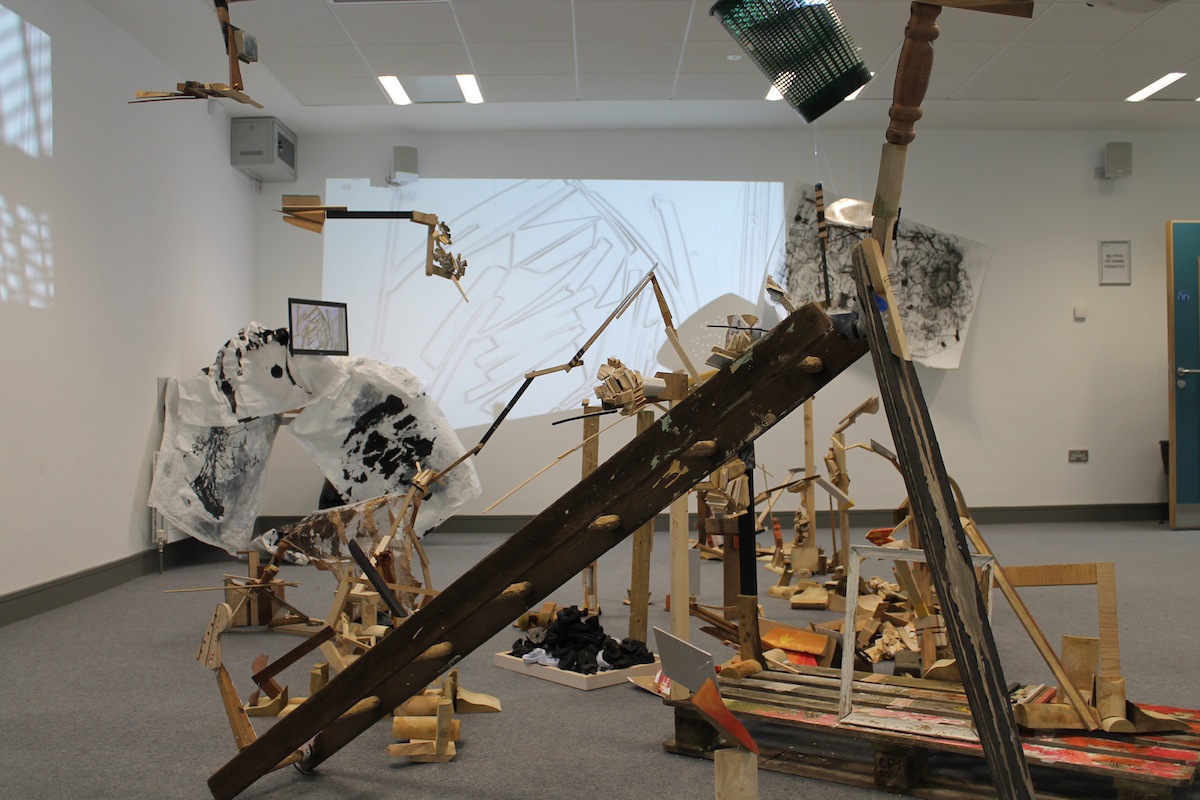 I hear Ken Gunning’s installation before I see it, a repeated ‘clink’ echoes down the hall outside, something falling over and over, a haunting and rhythmic beat. Inside, an installation at child’s height, constructed from found pieces of wood, cable ties, and broken bits of instruments, extends 15 feet across the floor, creating figures like modified toy transformers. Overhead, a bin and a chair seat hang from the ceiling. Black and white stop animation videos are projected on to two walls and in the corner a video monitor is surrounded by large crumpled charcoal drawings. Initially, the installation looks playful, interactive, like a puzzle or an invitation to piece something together.

This sense of reassembling is central to the work. Fractured pieces of throwaway wood from a coffin maker, a wood framer, an instrument maker have been reconfigured, sutured and hammered together. Some structures are held only by staples, suggesting the fragility of the exercise, as do the objects hanging precariously overhead.

Everything about this piece transforms as I kneel closer, the initial playfulness supplanted by the history intimated by the objects, at times almost sinister. Nails stick threateningly out of pieces of wood inscribed with pencil markings, measurements and notes. Teeth moulds are scattered throughout, some with names. Because these are used objects, every fragment is freighted with its own past and signification as well as the erasure of that narrative, a story we can’t know. Black teeth moulds are gathered in a pile that resembles a mass grave. There is an intensity that feels brutal, holocaustal even. The open mouths, skeletal, a ghostly absence in the work.

The shapes created from old ladders, skateboards and everyday pieces of wood anthropomorphise the landscape, an arm reaching, imploring, an arm striking, a body bent. But these limbs are fractured, truncated, suggesting amputated gestures. Some of this tension is built in very small moments. Cable ties, a sponge and a teeth mould on an upright length of wood: the teeth seem to clench into the sponge, a stifled scream, someone gagged, someone trying to withstand pain.

There is a pathos in this effort to put back together something broken, dismembered, an effort to re-member. Gunnning’s own background is palpable in the work. Raised in South Africa to Irish parents, Gunning was conscripted into the South African police to do compulsory service when he left school at age 17. “I had to go into Soweto into the township and be a riot policeman.” It had a profound effect on him all his life, he says. “To be given a gun and a rifle and to be told to go into these townships […] to witness these horrific scenes of violence and carnage and, to me, just persecution.” And while the work does not explicitly reference this past, it is inherent in the rhythms and shocks the work evokes.

I can still hear the installation’s jarring music, a sound created, Gunning tells me, by dropping the plaster teeth moulds against each other and inspired by a visit to the Jewish museum in Berlin, where visitors must tread on the path of Menashe Kadishman’s Shalekhet (Fallen Leaves) – 10,000 iron faces, the immersive and unforgettable clank: the sense of guilt, as Gunning describes it, for having stepped there. Gunning’s work is lyrical, a tentative and elegiac sensibility that is deeply moving, an effort to make reparation despite the harrowing and splintered sense of trauma in the broken fragments.