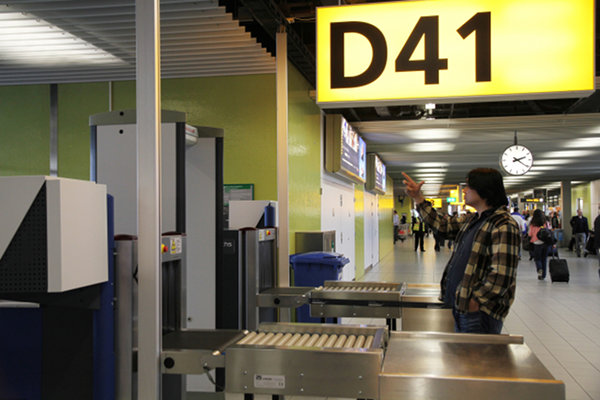 The Golden Thread Gallery in Belfast runs a small ‘project space’, offering it in quick succession to emerging artists. After spending three months as a resident artist at IMMA in Dublin in 2006, the art of Shiro Masuyama (born 1971), who studied architecture in Japan and calls himself a conceptual artist, is still only known to a close-knit group. His exhibition Intervention presented an installation of objects and videos raising a number of issues. The following focuses on two projections grounded in performances with two different concepts of the artist: in one he is observed, in the other he is the observer. 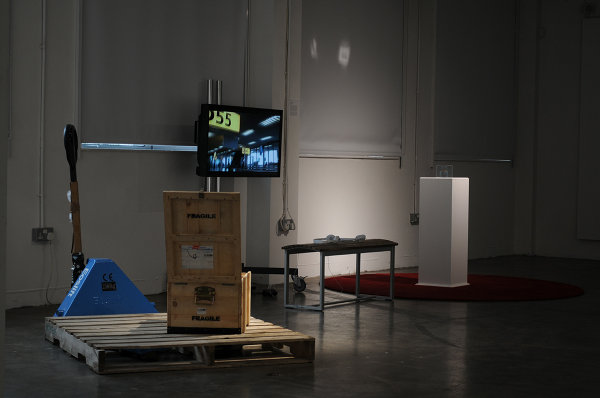 The video Crossing the Border watches the artist shooting a rubber band through a gap above the locked door of a security checkpoint at Amsterdam Schiphol airport. In this short sequence, filmed by Sinéad O’Donnell, he is the trapped and observed person. A gently playful solution when facing a forbidden space is miles away from any angry, loud and demonstrative action. I have not registered any anxiety either. Without attracting anybody else’s attention, he sends a rubber band as his accomplice to break the rules of a compulsory search to gain an imagined freedom. The simplicity of the composition and economy of means make me recall the charm of a traditional haiku. Except that a poem’s seasonal reference to a natural world has been taken over by a man-made environment, the architecture of the airport. As he constructs it, the meaning hovers around the direct experience of child-play soothing the discomfort of control and surveillance. The non- declarative action has been enacted to the camera, building on the experience only, and thus directing the work towards philosophical empiricism, the one so furiously attacked by Lenin in 1908. Viewed as a performance, it offers permutations of a failure to overcome real limitations: it was not produced at a set time for a set audience; it is neither a clear narrative nor a seductive spectacle; the person acting cannot overcome the rule he / she wishes to violate. Viewed as a video document of a private encounter in a social space it exposes both the power of play and imagination and their impotence. The artist avoids drama and propaganda by the strategy of foregrounding. While this term comes from linguistics (viz M.A.K. Halliday), it has been applied by Viktor Shklovsky to art as a technique of de-familiarization. The rubber band in Masuyama’s video is the messenger-cum-perpetrator to the extent to which it is a poetic object. It becomes that only when it crosses the barrier and lands in the forbidden space. Nevertheless, it is also just a rubber band on the floor. The artist, although a mover, remains an unobtrusive outsider. 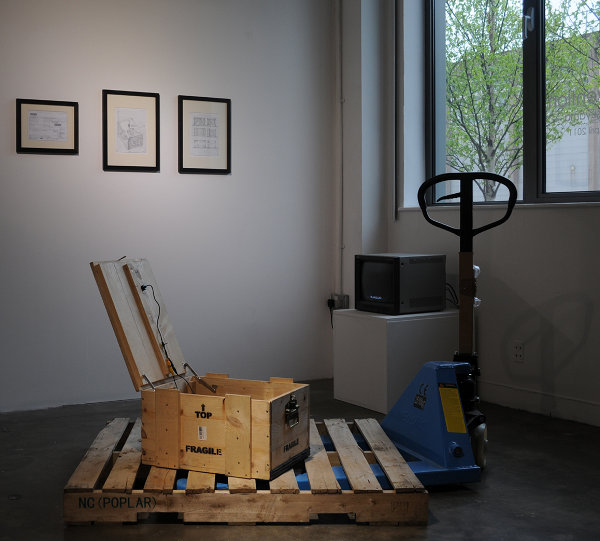 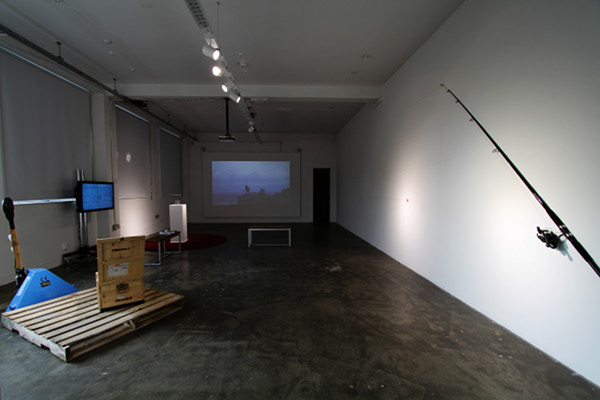 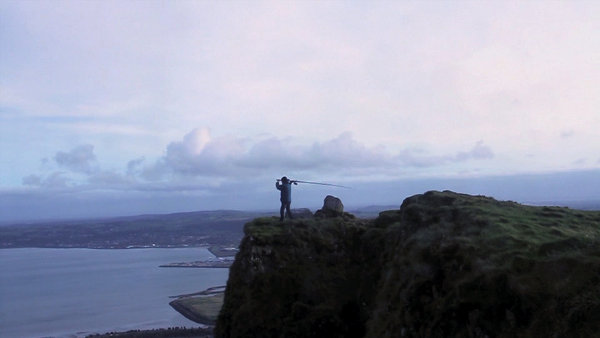 The naturalistic technique of causing the real to be seen governs also the second video, Measuring the Height of Napoleon’s Nose. In its first part the lens, in the hands of Masuyama, observes the route taken through the streets of Belfast in a taxi, forming a flow of observed, ‘stolen images’. The lens sees what he sees, it cannot see him, we cannot see him. In the second part, in a structured performance, two friends walk with him on Cave Hill above Belfast Lough, aiming to measure the height of a part of the rock with a fishing rod. Observation and curiosity foreground a promise of new knowledge, be it as ordinary as the size of a rock. The locals call the rock Napoleon’s Face, the nose easily recognizable. Once the artists reach the upper level, a fishing line is unwound down to the ground below; the measurement accomplished, end of film. In the gallery, the fishing rod and the line were displayed on a wall, the used length of the fishing line snaking in horizontal loops. Like a traditional renga, it was a group activity, the action planned in detail while allowing for some spontaneity. Confident and decisive, this is a declarative way of making meaning. It avoids slipping into spectacle, and it keeps the narrative to a minimum, without undermining it. Masuyama resonates Herbert Spencer’s musing on the importance of economizing the observer’s attention, subsequently formulated by Shklovsky as economy of mental effort. It calls for presenting ideas so that to apprehend them requires the least possible mental effort. Given that the friction and inertia of the vehicle of thought deduct from its efficiency, the artist is expected to reduce both to the smallest possible amount. This idea has obtained numerous permutations throughout the history of art, and contemporary performance artists currently still come up with new permutations. Zygmunt Piotrowski, a well respected Polish performance artist, for example, proposes that what the subject exposed in a particular performance draws attention to the ‘entirety of being’. I suspect that Masuyama is not averse to that kind of connection between the particular and universal. After all, performance art means, inter alia, to carry out, to bring about, expose something, lay open self or something, so that it draws the viewer’s attention. 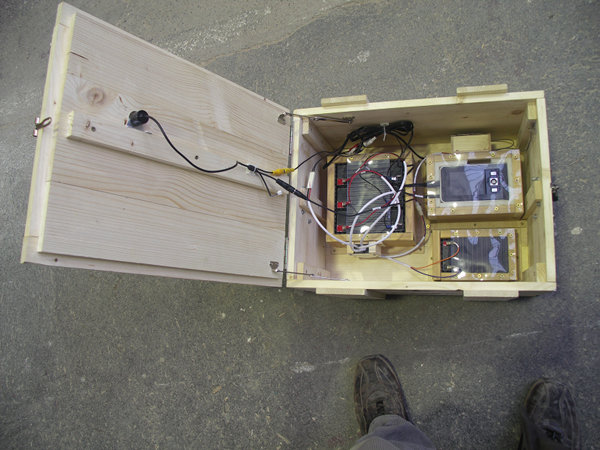 Foregrounding is a motivated prominence of an element or elements through de-familiarisation, whether by deviation from a habitual thought, from a norm, or by replicated or parallel pattern. The fishing line is both – a deviation and a parallel similar in function to that cutting word kireji. Regardless on which side of the lens the artist places himself, he starts with an observation and a question. Then he selects an object that harbours a promise of entertainment and knowledge. Measuring is a tool of scientific knowledge, deviation belongs more to either the murkier sides of the psyche or to play and art. The wonder of combining science and art offers a transformation of ordinary lived experience into an aesthetic one, seemingly effortlessly.

A version of this article is also available on www.livinggallery.info.