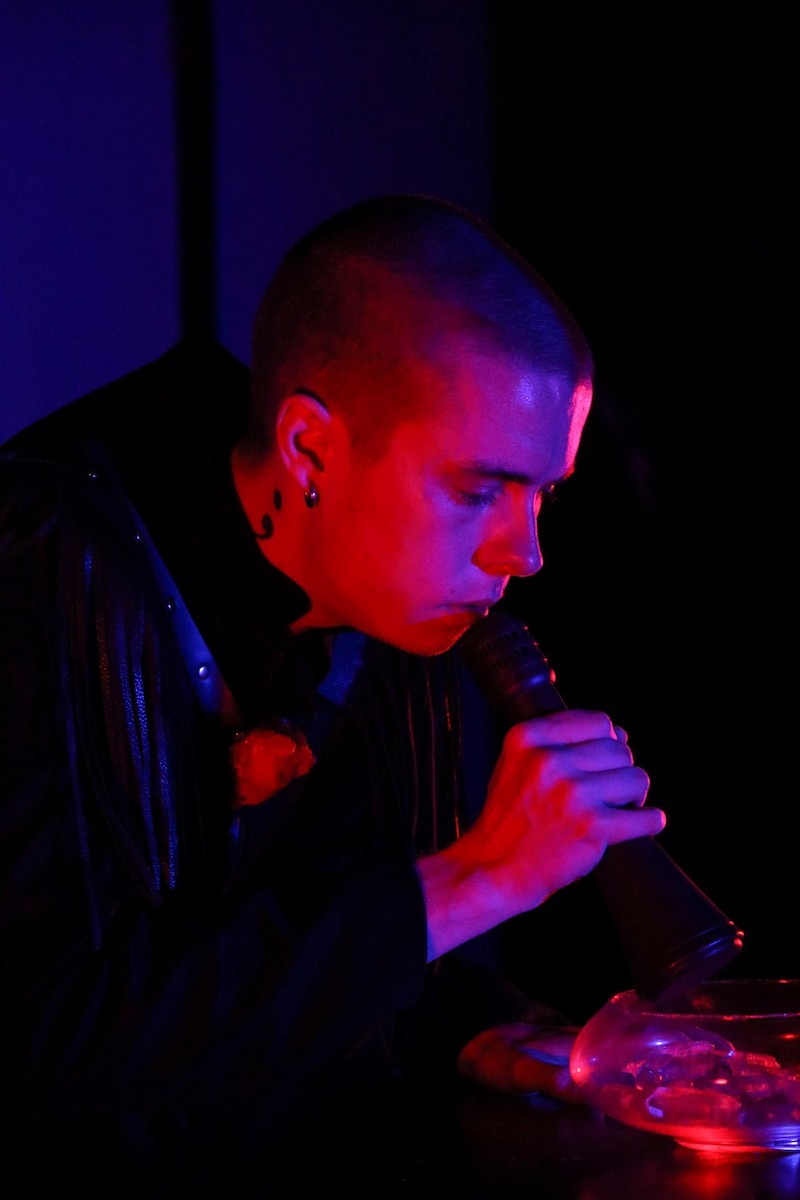 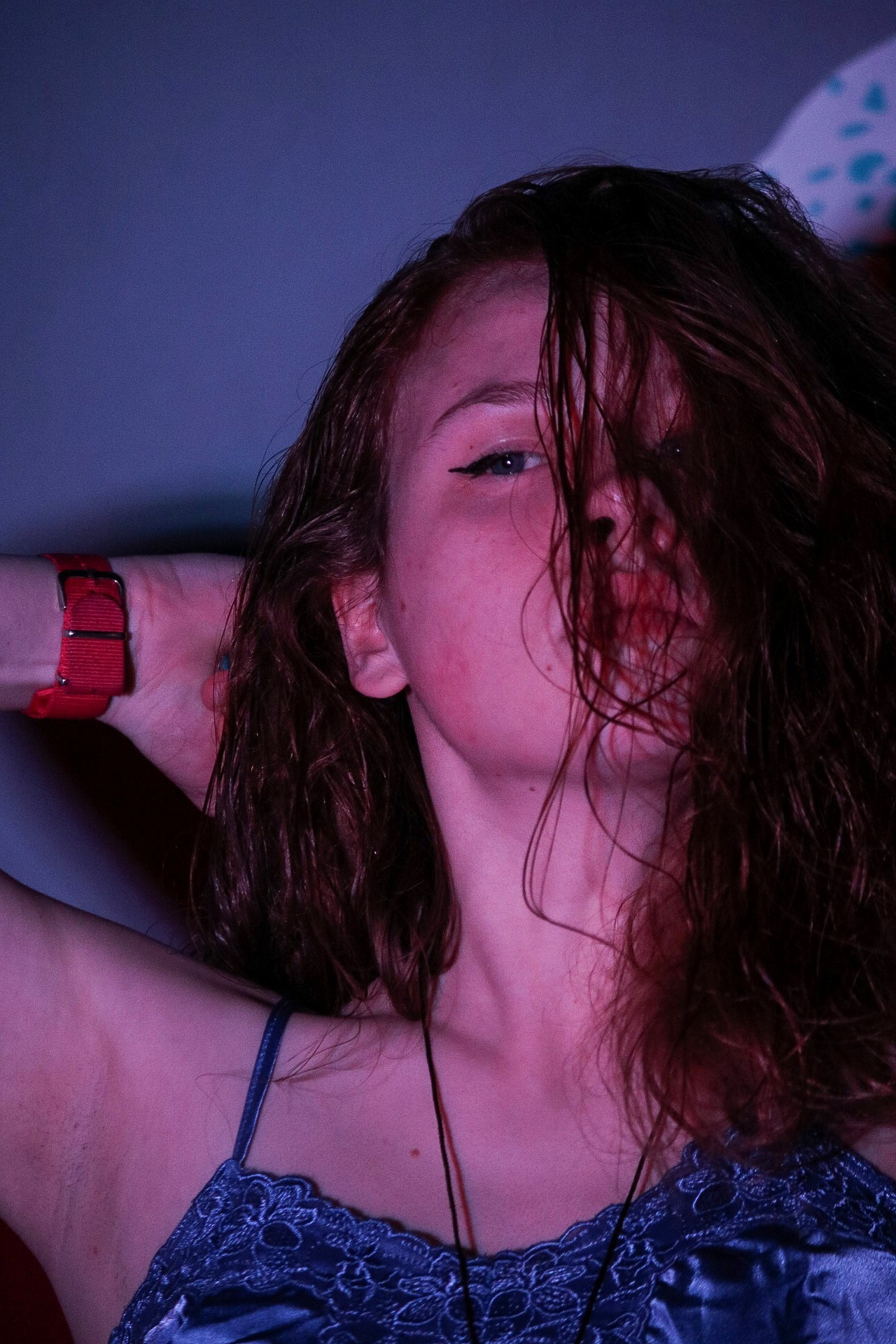 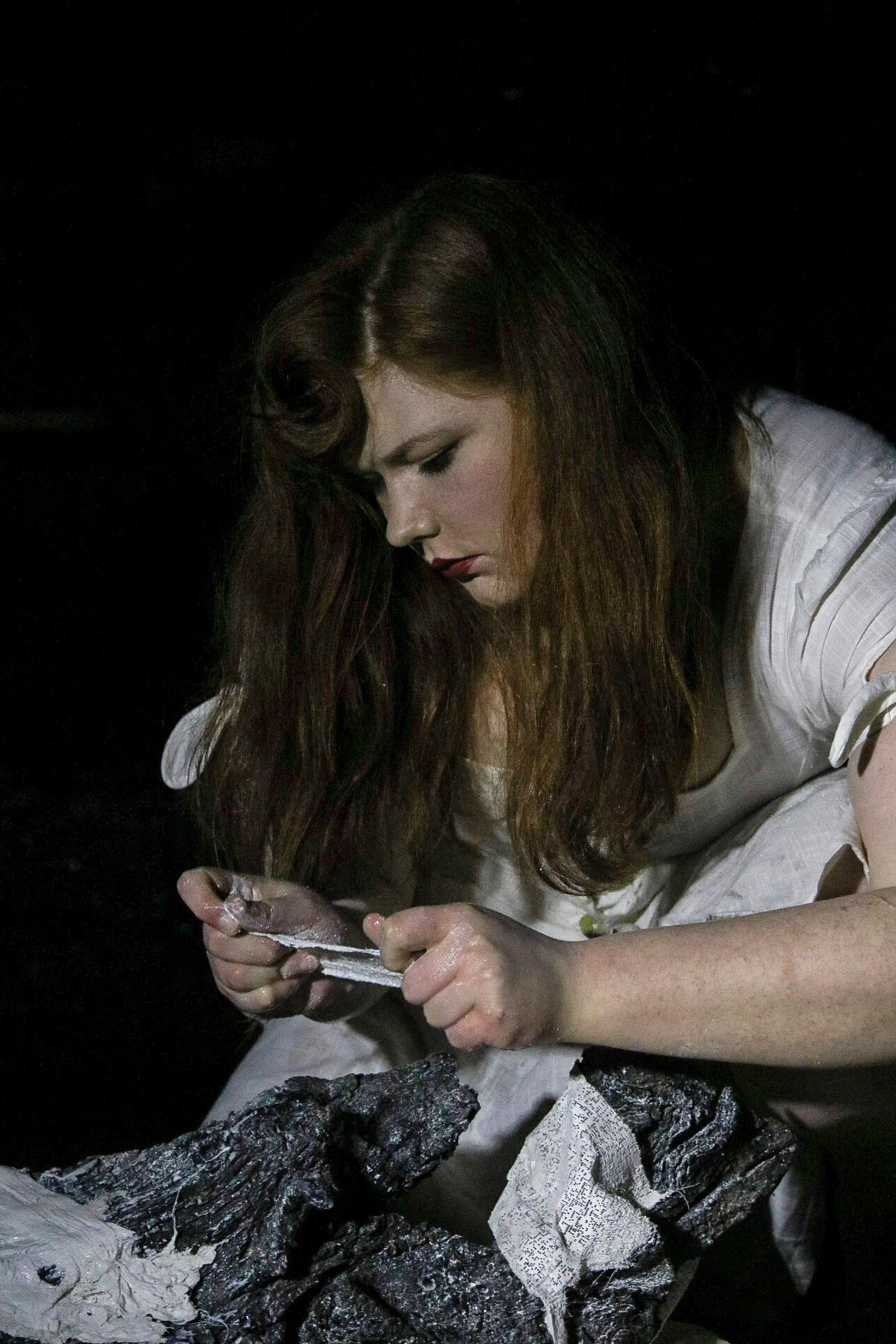 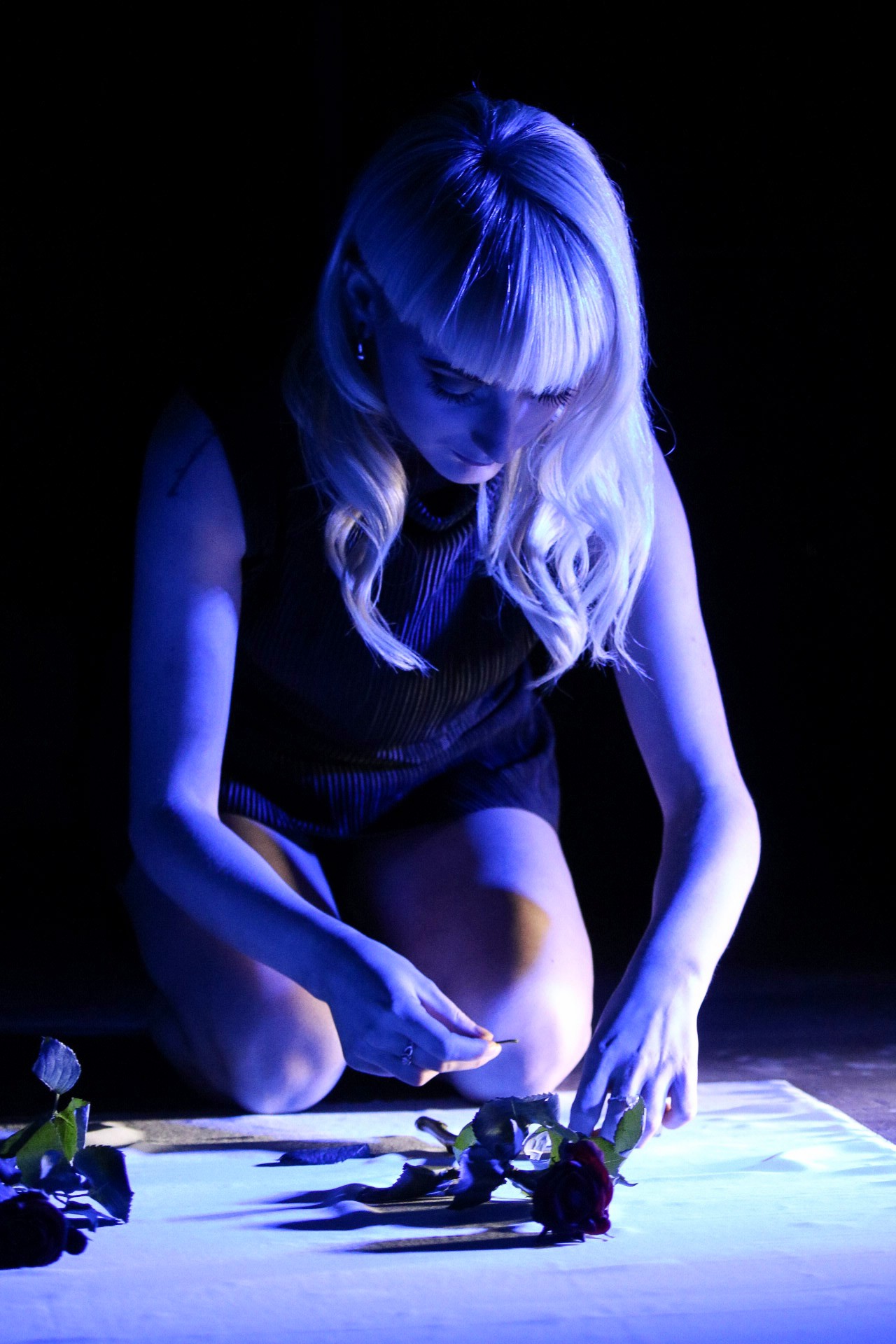 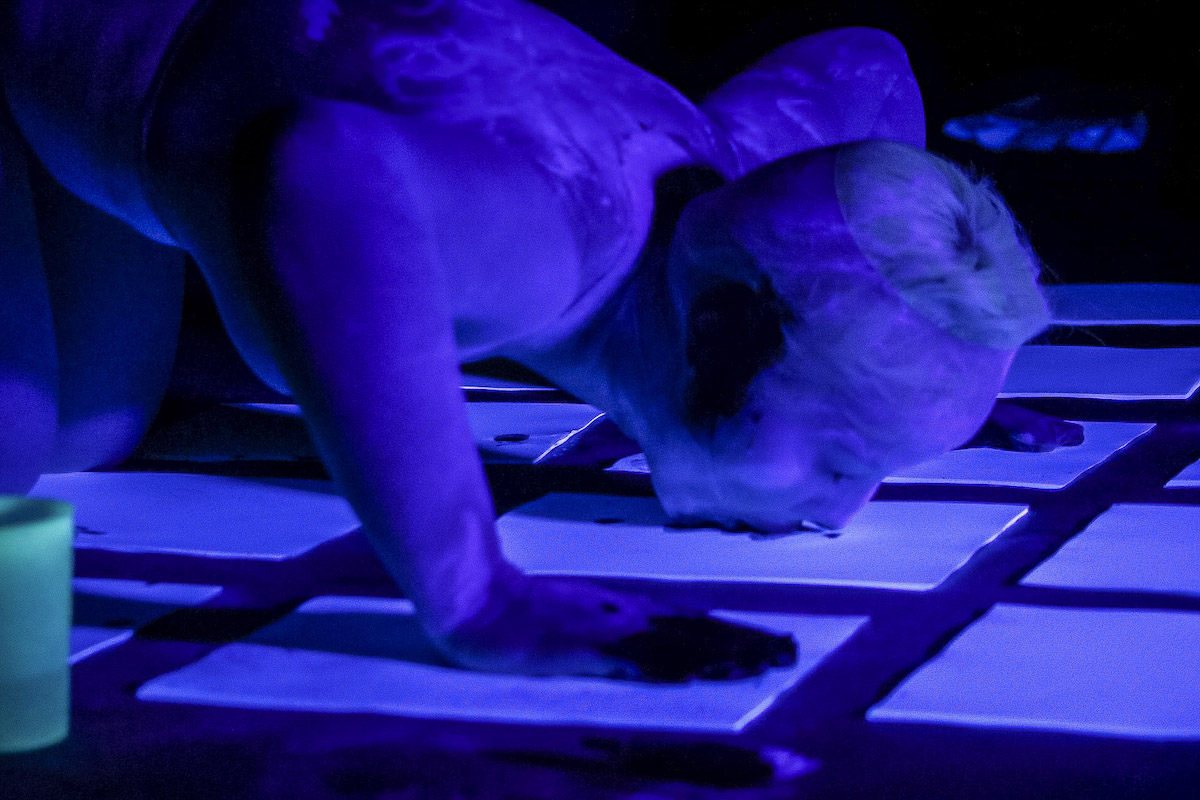 Evil is a live art collective that was formed by performance artist graduates and current students of Limerick School of Art and Design (LSAD) in 2018. They recently held their third live performance night in Limerick, with the theme of Rebirth.

Day Magee is the first artist on the billing. He enters the space in a full-length, tight-fitting black robe that is somewhere between a monk’s habit and an elegant ball gown. He sorrowfully wails, and at times roars, into a bowl of quartz crystals to ‘charge’ them with his grief before angrily rubbing them across his face as if attempting to wash himself clean of the host of emotions he feels. His piece, Charging, centres around male keening as a way of expressing grief over his father’s recent death, while challenging society’s traditionally expected repression of male emotion. The piece ends with him stuffing stones into his mouth, rendering him mute.

In Courtney Sharos’ piece, Brush your teeth Wash your face Comb your hair, the artist comes to the performance with long hair that hasn’t been brushed in two months. She attempts to ease out the mass of knots and tangles, not by coaxing gently away at the ends as you usually would, but by digging into her hair from the roots with a cheap plastic comb. It bends to almost breaking point as she wrenches it through her hair, tearing out clumps in the process. The audience cringes at the imagined pain she must be feeling and gasps when one particularly stubborn knot releases with an audible tearing of her hair. As she progresses with the untangling, Courtney looks around at the audience with little expression, but her deadpan look feels loaded and provoking because of the context. ‘Is this what you want? Is this what I am expected to do to myself to be accepted for my appearance?’ I imagine she is asking us.

For an craiceann a ghlanadh / to clean the skin, Niamh Ní Dheargáin arrives into the space cradling a chunk of dried charred wood in her arms like she would a baby. She tears strips of plaster bandage, dips them in water and tenderly applies them to the wood, while a pastoral soundtrack of birdsong plays in the background. The plaster takes on the shape of the wood as it hardens, creating a new sculptural object. This feels like an exploration of how we view the natural world and resources around us, the nature of our relationship to it and the temporary lifespan of natural objects/materials.

Aoife Lee’s Reflection was a piece she first worked on two years ago. Inspired by, and intended to be performed in front of, the Rose Windows at Notre Dame Cathedral in Paris, it was to feature 120 deconstructed roses that would form a circle which mirrored the window. For this event, she meticulously deconstructs three roses onto a white satin sheet, pulling them apart into their constituent individual elements, removing each thorn, leaf, sepal and petal and laying them down in the general shape of the rose. It is surprising to see just how many individual elements combine to form something whose shape we think we know and take for granted. The piece ends with a spoken narrative centred around construction/destruction, birth/rebirth and the temporary nature of all that is around us. It concludes with the line “Those who accept change will see the beauty in destruction”.

In Listen . Dictate . Regurgitate . Saerlaith Molloy is dressed in a full body stocking from head to toe. She smears black ink across the side of her head and makes a print of it on to one of the many A4 sheets of paper that are laid out in a grid format in front of her. She then gifts the print to a member of the audience. She continues in this vein, making prints from her body, but progresses to sucking the ink into her mouth through her soaked stockinged hand and spitting or drooling it on to the page. Her outfit, combined with the lighting, the disconcerting repetitive electronic soundtrack, her lack of words and the sight of the black ink spilling from her mouth, gives her the appearance of a malformed, other-worldly creature who is desperately trying to communicate with us but who ends up frustrated and isolated by the process.

There is something really special brewing within the Evil collective. The work they produce is thoughtful and provoking, and feels like a vital form of artistic- and self-expression. Having a paying audience means that the artists involved have tangible events to work towards and it gives them a chance to try out ideas beyond the conceptual stage of the studio/workshop. Regular events like this also cultivate that audience and serve to build an understanding of and recognition of performance art within the city.

Evil events are held upstairs in Pharmacia bar in Limerick, the home of low-cost music gigs and Limerick’s burgeoning hip-hop and rap scene. The ability for the audience to have a drink while engaging with live art for a couple of hours, away from the formality of an art gallery setting, makes it an accessible event and one that is always packed with young people. It is one of the most exciting things to happen in the art scene in Limerick in some time and it has quickly become one of the city’s best alternative nights out.