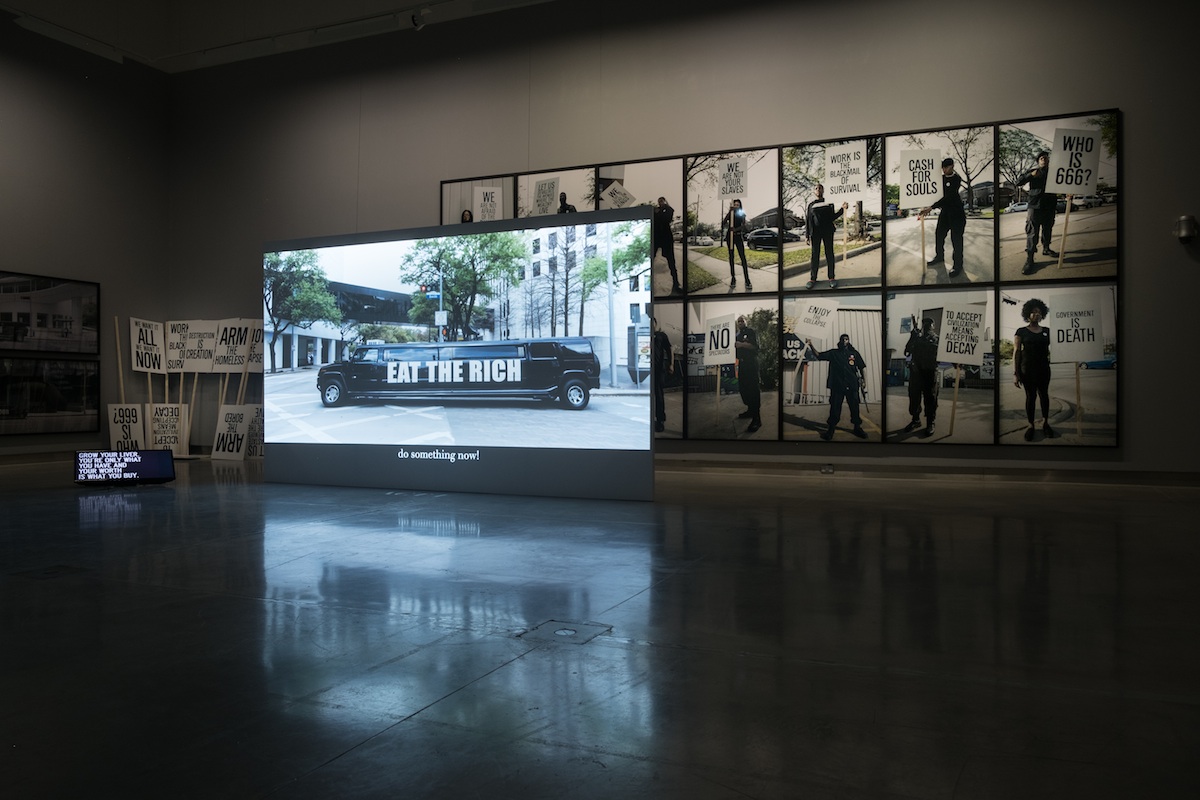 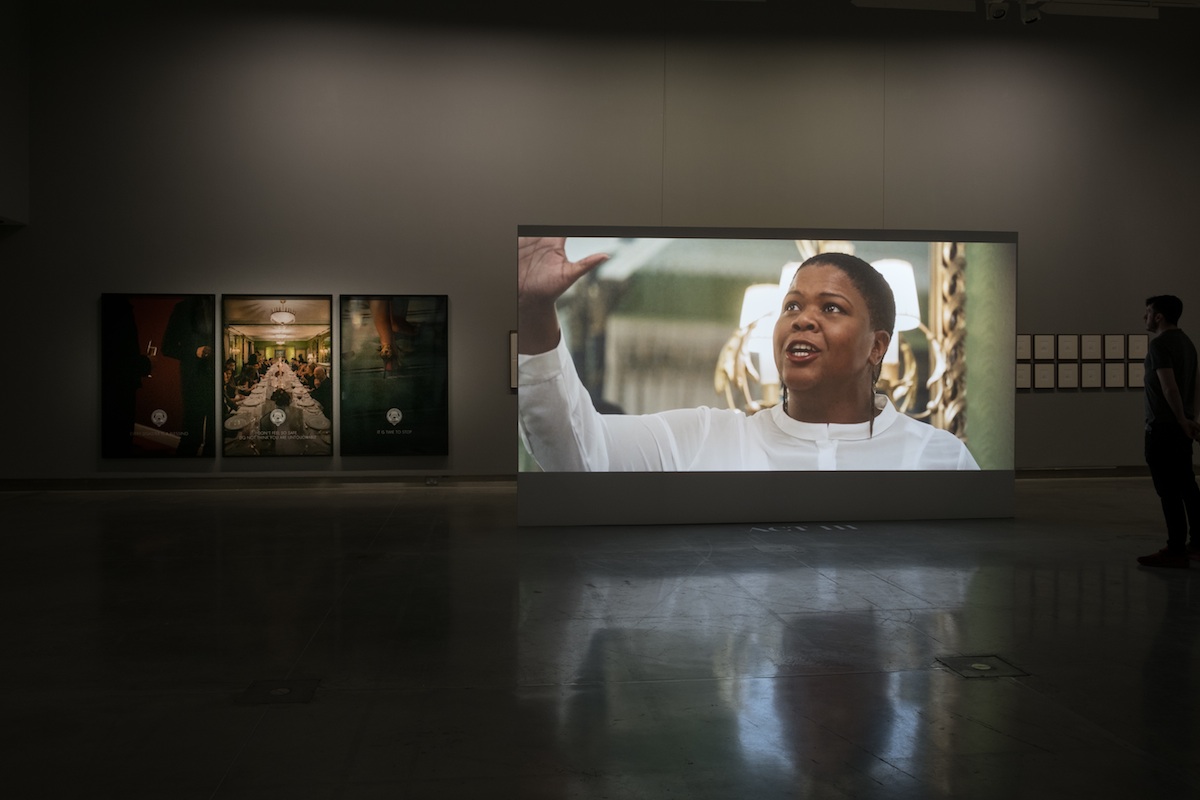 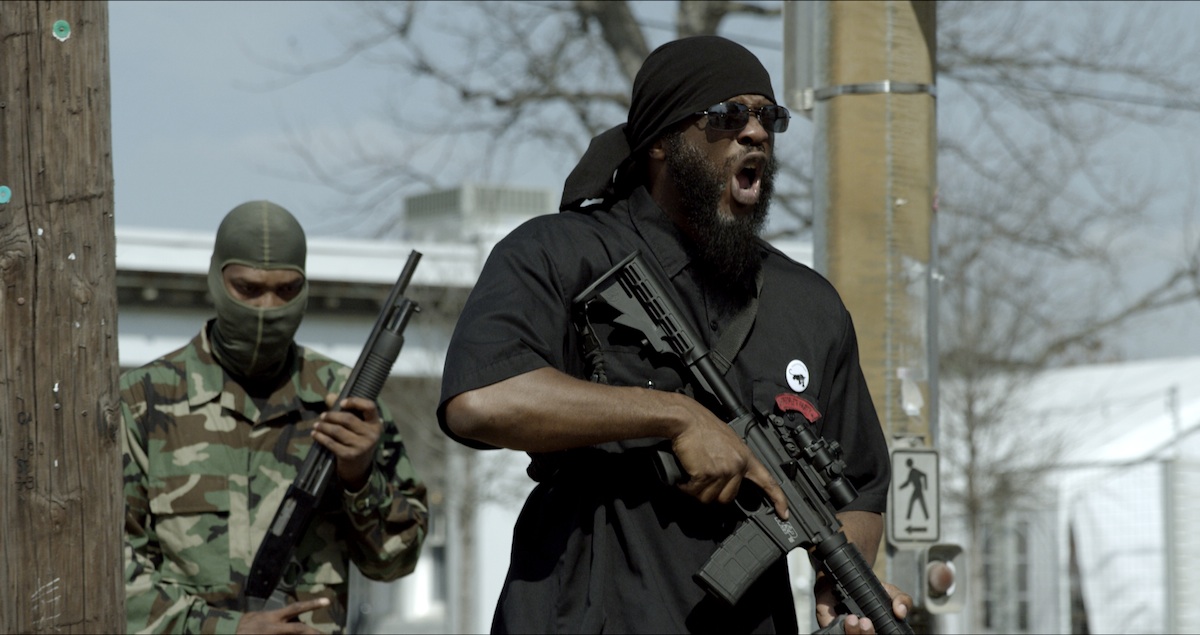 ﻿﻿Democracia, ORDER, Film still from Act I Eat The Rich/Kill The Poor. 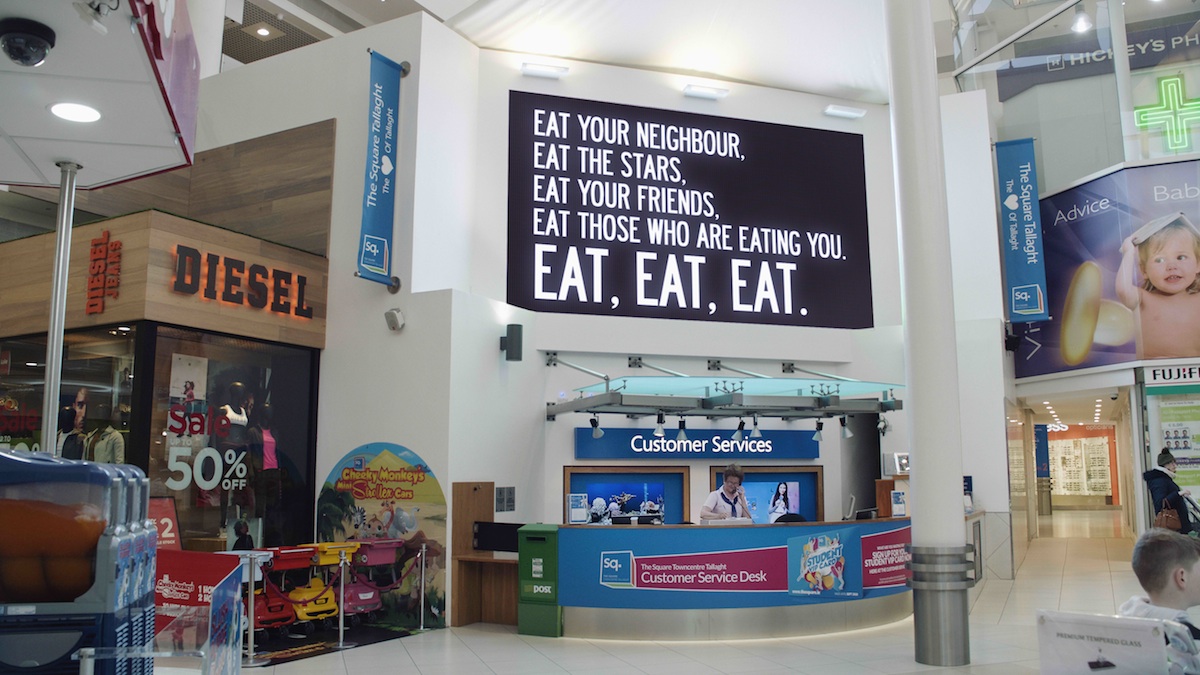 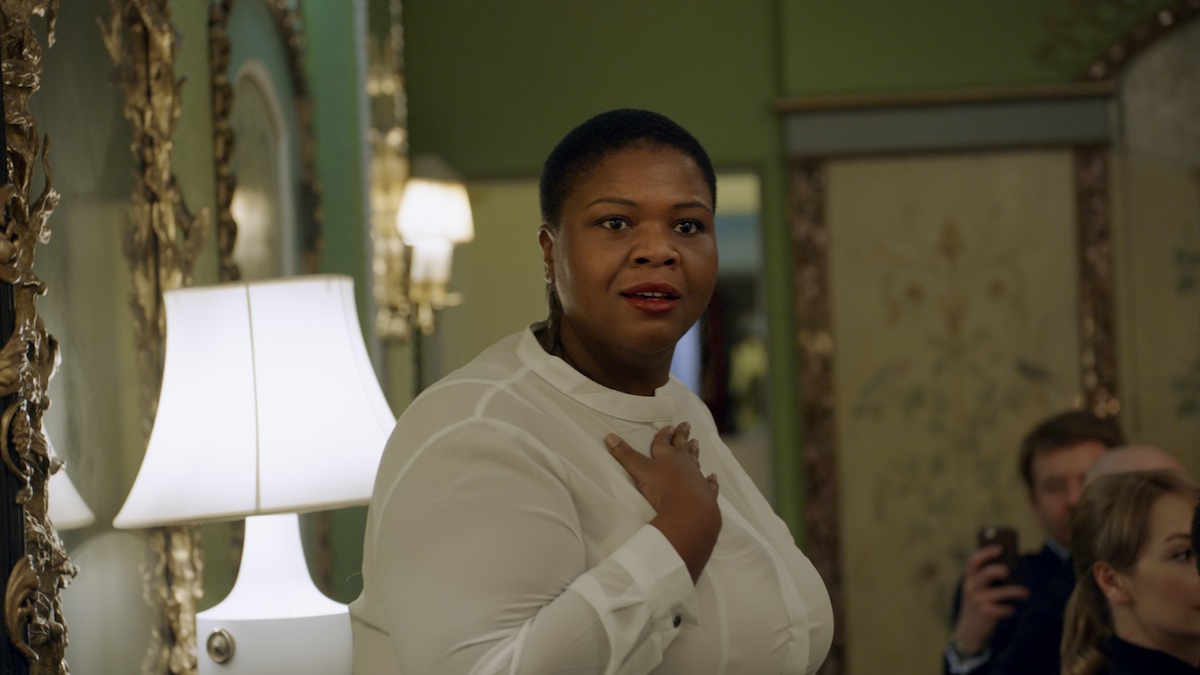 When the people shall have nothing more to eat, they will eat the rich.
– Jean Jacques Rousseau

ORDER is an operatic film installation by Democracia that weaves a story through Texas, Tallaght and London about capitalism’s inherently exploitative nature, featuring black power groups, a school choir and a luxurious dinner party in the Dorchester Hotel. Provocative phrases like “Kill The Poor”, “Cash For Souls” and “Devour All That You Find” appear throughout. Emblazoned on a gallery wall is a large “Class War”. But what is the message behind the provocations?

Democracia are an artistic collective founded in Madrid by Pablo España and Iván López in 2006. They have consistently made explicitly socio-political artwork, keen to stress the collaborative nature of their practice, both in the production and reception. A past project has had them threatened with legal action and punitive fines over contentious issues like the photographing of police in Spain. Such is the radicalism of their hard-left political critique, it is not surprising that they have occasionally clashed with the authorities or those who set limits on artistic freedom. This latest artwork tackles similar legal hurdles, such as gun laws and public performances, as well as attempting to access the private, restricted spaces of the wealthy. This exhibition comes at a particularly politically fraught time for Ireland’s artistic scene, with the Irish Council for Civil Liberties criticising the “worrying trend” towards censorship and the “inappropriate use” of regulations to restrict artists.[1] While a situation of artistic freedom is the expected norm in Spain, Ireland and Europe more broadly, there is ample room within the regulatory apparatus of the state to pressure, penalise and even censor unwelcome voices.

Shown in Dublin at Rua Red, the three-channel video is projected on to three large partitions in the centre of the gallery, with a series of photographs and placards which feature in the video, excerpted and presented as stills and objects along the partitions. Each video contains a major set piece of operatic performance with each set of songs signalling stories and events that illustrate a different aspect of the widening class divide.

The first act makes explicit the relationship between capitalism, the state and the violence put upon marginalised communities. We follow a black stretched limousine with “Kill The Poor” written on one side, and “Eat The Rich” on the other. It catches the bemused and bewildered eye of pedestrians, while passing a monument to George Bush. Eventually we are led to an open carry demonstration by the Huey P Newton Gun Club, an umbrella organisation for a number of black power groups that advocate gun ownership for self-defence. The participants are clad in military fatigues and brandish heavy-duty weapons. They hold placards with phrases like “Arm The Homeless” and chant the names of black people shot by police. The extremes between rich and poor – and how racialized this divide is, especially in America – are brought to the fore here, made explicit through the hardcore slogans.

The second act plays off the 1988 sci-fi film They Live, in which the protagonist can see the real message behind advertising (OBEY, CONSUME, CONFORM) while also critiquing the endless consumption inherent to capitalism, both from a moral and ecological standpoint. We see a Dublin based children’s choir singing in the middle of a typical shopping centre that could be found in any urban site across the Western world. The children are dressed in traditional red robes, with old-fashioned white collars; the camera work following them, and the bemused consumers, as if we are watching from a detached position in a documentary or reality TV show. As they sing, billboards highlight capitalism’s endless appetite: consumption is intoxicating; it is a sick form of empowerment; and it is wildly unsustainable. The choir singers contrast such apocalyptic messaging, as do the lazy, relaxed movements of the shoppers; the tension between perception of abstract forces and everyday life exists on many levels here.

The third and final act presents a dramatic clash between a cold and careless capitalist, and a passionate exploited worker. Situated in the Dorchester Hotel in London, an example of British modernism that is associated with cultural elites, predating the post-war social optimism, the luxuriousness of the location is clear as we observe this lavish dinner party. The well-groomed white man in a suit gives a speech about profiting from chaos, and bemoans how the poor have had an easy ride on welfare. Incensed, a black staff member leaves the kitchen and storms into the room, delivering a powerful operatic monologue. The message she is communicating is clear: their wealth comes at a direct cost to the rest of society, to workers just like her. It is at this stage that the conflict between rich and poor becomes the most direct, that the storyline becomes most poignant. It’s the grand finale, offering viewers an inspiring ending where the kind of individual behind major economic and political catastrophe is actually confronted. While the previous acts wrangle with all-consuming abstract forces, touching on the political fringe as well as theatrical possibilities, the third act feels like a much needed, positive rallying cry – a radical political horizon that feels both necessary and possible.

All of the objects presented in the gallery are either visible in the film, or directly reference it. They are mostly wall mounted photographic stills, sitting behind the partition on the gallery wall, each corresponding to the film sequence it is closest to. The most striking are the large-scale photographs of the black power group members. Each figure stands upright in front of the camera, staring directly at the viewer as they brandish both a gun and a provocative placard. The level of staging in this scenario could suggest a performance, but even cursory knowledge of the history of these particular black power groups confirms that their paramilitary posturing is completely sincere.

Opera is seemingly a surprising thing to find in a gallery, but it is not absent within the contemporary art world. A number of artists have been invited into the opera house.[2] Marina Abramović is one of a number of artists who have adopted the opera format recently [3], such as Harriet Middleton-Baker [4], Shirin Neshat and William Kentridge. Still, at least in the Irish context, there is a surprising novelty to finding such a high form of culture within contemporary art, so historically concerned with blurring boundaries, and often bringing in the low and the abject to its white walls. But ORDER is never just an opera for the sake of it, often stressing its anti-capitalist or feminist message, and the connection that this has to the legacy of this musical format. The text of this opera references Hesiod’s poem Works & Days, which was believed to have been written in ancient Greece during a time which saw colonial expansion, debt-slavery and class war. There is an important addition here too; opera is more than a rich historical context to the messaging, as they notably take it into the world through charged interventions in real space with unwitting pedestrians and consumers witnessing and reacting in real time.

In the film, for this international examination of capitalism and class war, we see Dublin placed alongside Houston and London, It feels significant that this work is premiered at an Irish art space committed to a socio-politically engaged programme within a working class area on the edge of the capital. There is a particular sense of urgency to this artwork’s fiercely political message, and it is strengthened by inclusion here within the Rua Red programme. There has been a notably political turn with the programming under new director Maolíosa Boyle, strengthened by the partnership with a/political, an organisation that helps artists realise ambitious socio-political projects. This exhibition is the third from this partnership, with more to follow in the future. There is an ambition within the Rua Red programme, facilitated by this kind of international partnership.

ORDER is a project four years in the making, and it shows. The high production values are evident; the camera work is sophisticated; the sound design and editing create an immersive, considered pacing. There is something thrilling about an artwork that does not just investigate, explore or expose questions about today, but makes explicit the injustices of the present system, proudly brandishing a call to eat the rich and fight a class war. This sits in opposition to a familiar aesthetic of the contemporary art video projection, which so often in a semi-academic manner raises questions in a distanced, dispassionate tone – it wants you to believe that the work is well researched, considered and serious. By sidestepping the familiar style and tone often found in the contemporary politically critical video installation, Democracia have brought a high octane energy to this revolutionary call.